Written by Nicolas Messner on 27. Sep 2018
Share
Take two teams that know each other without really knowing each other, two teams that everything could bring together, but that the international geopolitical situation has divided for decades, two teams that speak the same language, but do not speak to each other. Thanks to judo you can bring them together for the better, and at the end of a historic day, these two entities become one and go hand in hand on the podium of the biggest competition in the judo world. We present the delegation of Korea, bronze medallists of the 2018 edition of the World Championships in Baku and which today was competing under the unified colours of the North and the South. 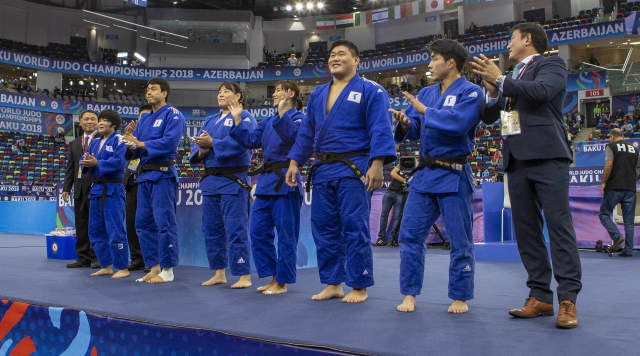 Nothing was written and nothing was guaranteed, yet the desire to bring together the two Koreas (the Democratic People's Republic of Korea and the Republic of Korea) under the leadership of the International Judo Federation and its president, Marius L. Vizer, was present and thanks to the unwavering will of all the protagonists, the event took place, under the best possible conditions.

A few days ago, the athletes of both delegations were already training together to prepare for the competition, while at the same time, the respective leaders of the North and South agreed on the procedures. The magic was going to work, could the sauce rise, the mayonnaise be tasty? At the end of the day, it is clear that this was the case and in the best way possible.

All sport and judo enthusiasts in particular know it, building a successful team is a long-term job and it is not necessarily the best team on paper that wins in the end, even if Japan, the big favourites, left Azerbaijan covered with gold. So, building a team that can perform from the first time at the World Championships was a challenge, but the gamble was worth it. 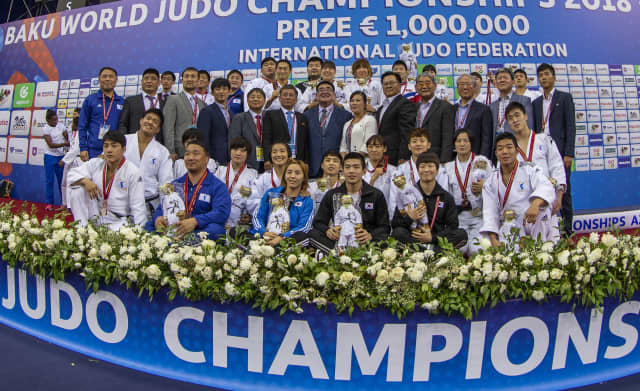 From the first moments of the day, it seemed obvious that it was working. Some supported the others, others encouraged some. The coaches took turns in their chair in a perfectly orchestrated ballet. The smiles became more and more present, bigger and bigger, but above all, the victories started to pile up, at least until the semi-finals against defending champions Japan.

A defeat against them did not affect the determination of the unified team of Korea (COR) and the athletes full of motivation finally climbed on the podium after having defeated the brave team of Germany. 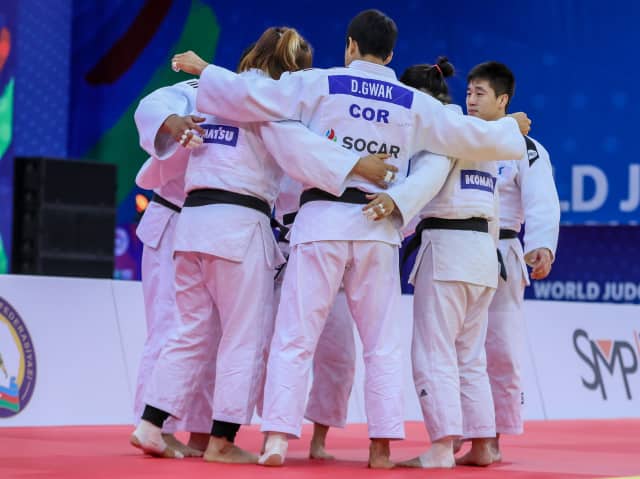 Earlier in the day, Korea had posed with the white card that is synonymous with peace through sport. At the end of the competition, they answered the questions of the journalists in a relaxed atmosphere, with the feeling of a job well done, but especially with that of having written a magnificent page of history.

Sport and judo especially came out of this incredible day with glory. The world will continue to turn, sometimes upside down, but today it's not a small step that has been taken, but this is a big gap that has been filled.