Julien Goes Around the World (6)

Written by Nicolas Messner, Jo Crowley on 09. Sep 2022
Share
Last time I wrote to you I was in Georgia with Lasha Bekauri, the Olympic champion, and his coach David. Today I'm happy to see that he came back from the Oberwart European Open 2022 with a gold medal, after his shoulder surgery. Bravo! 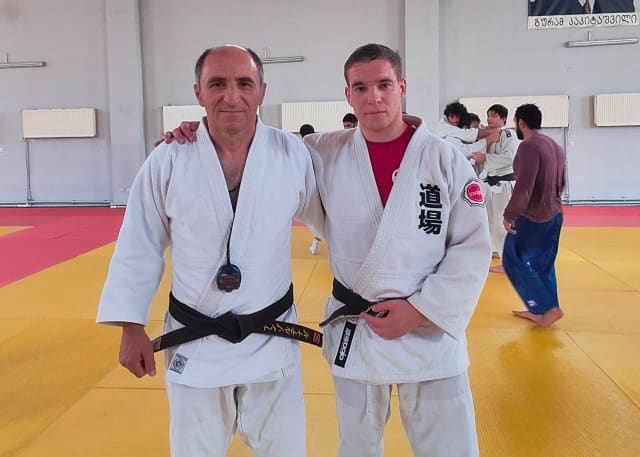 I've decided to go to the city of Gori. This is a special city because with only 50,000 people, they have more Olympic and world medals than some of the biggest countries in the world. Shavdatuashvili, Gviniashvili and more come from this city.

I had a contact who was helping me with administration, organising where to sleep and eat but as he wasn't physically present, it was the young Archil Mamulashvili, who is actually competing for a French judo club, who kindly provided some extra help. He speaks English and French too and thanks to him I was well integrated with the judo club and it was a very pleasant moment.

I've discovered that this city is only talking about judo, they are completely immersed. Of course, there is the Joseph Stalin museum, since he was born there, but apart from that it's only judo training and other judo activities. 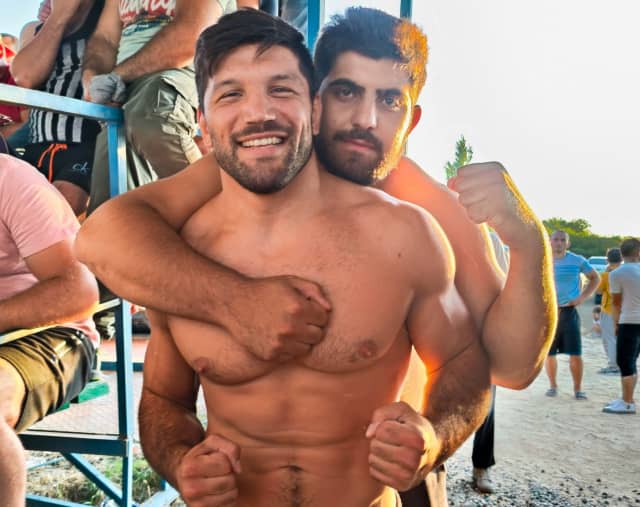 International judoka came to help their friends to warm up.

The coach of the judo club invited me to watch the Chidaoba National Championship. This is an ancient form of wrestling invented in Georgia. International judoka, who are registered on the World Judo Tour, cannot participate, but some of them came to help their friends to warm up. This was a moment of real jita kyoei. I had the feeling that I was diving into the intimacy of the Georgian culture; it was amazing.

I came back to Tbilisi to wait for information about my next stage, Azerbaijan. As a reminder, it is prohibited to enter the country by land due to Covid restrictions. My project aim to try to visit 197 countries without any flights, thanks to Ulker the Press Secretary of the Azerbaijan Judo Federation, was maintained. She did an amazing job and worked to obtain me an official pass to travel by land, a paper signed by the Minister of Sport. When I reached  the border, the police couldn't believe their eyes and didn't let me cross, at first. Then they told me that I was a very lucky guy because even most diplomats couldn't enter the country.

I took a taxi from the border to the capital, about 20$ for 500km! There, everything was ready for me. I had a place to stay and people had a full programme ready for my time in the country. My visa was valid for just 10 days. 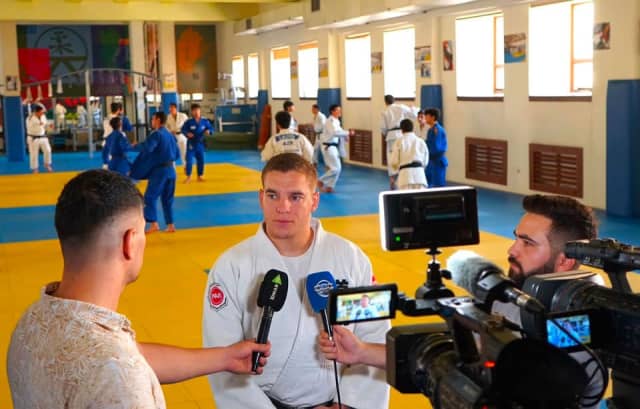 First, I went to the biggest judo club in Baku, where I participated in a very busy training session for veterans. It was a big surprise to find such a popular session for this age group and everyone was truly friendly and careful with each other. The veterans’ good mood isn't a myth! The training was lead by 9-time veteran world champion Farhad Rajabli.

As Ulker organised everything, I had people to guide me through the city and I discovered the culture and the beauty of Baku. The federation wanted me to give a class to teenagers who had never done judo before. They were on a summer camp for psychological rehabilitation. 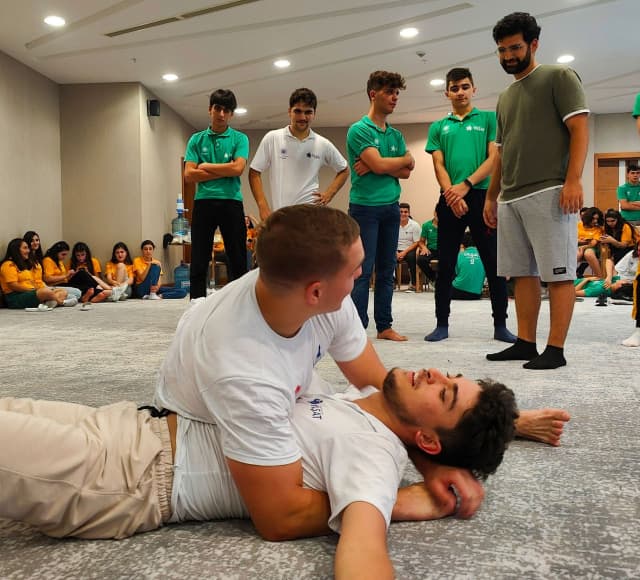 It was challenging because we had no dojo or judogi and they were all beginners but the class went very well and we all learned a lot. We were there for a couple of days but sadly everyone had to be evacuated because of the forest fire. While in Azerbaijan, the heat was crazy, between 37 and 38 degrees. In the mountains, one of the biggest forests in the country was on fire. It was heart-breaking to see that.

One of the reasons why I started this project was to be able to see all of the world’s wonders without contributing to their erosion. Seeing them burnt to the ground made me really sad. 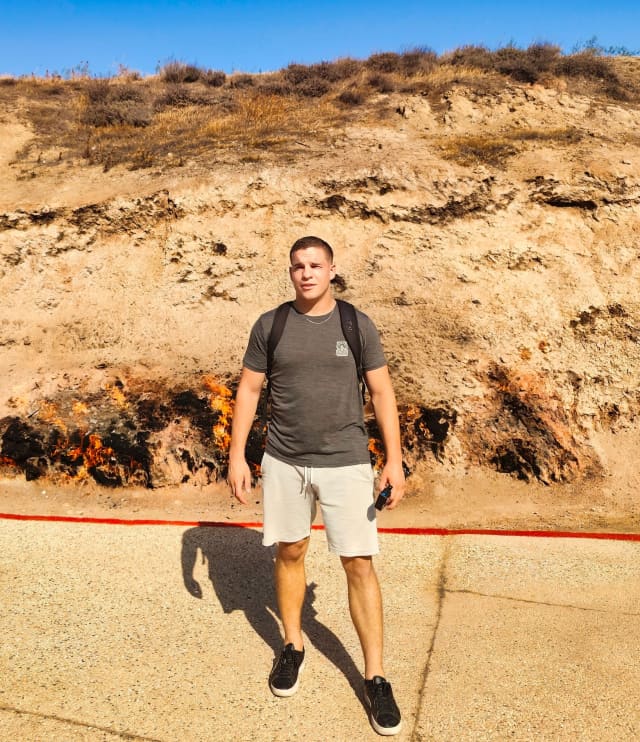 The were really interesting and positively unusual things too. We also went to a place called Yanar Dag. It is a natural hillside gas fire which blazes continuously, right on the Absheron Peninsula on the Caspian Sea near Baku. This was the first time for me to witness something like that.

The next day, after the evacuation, I went to see the national cadet team but I couldn't show much to them as they were in their final preparation for the world championship for cadets. It was still interesting to see and to talk with the coaches. A national television crew came to talk about my project and also about those cadets. I've noticed that for a few years the judo is really changing in the country. The federation is working hard to make things even better. The way I was welcomed is one example of this. The federation isn't scared to explore innovative things.

I had to leave Azerbaijan in a rush and with it not being open to tourists, the boats from Baku to Kazakhstan were not open for me, so I had to take a cargo ship. Those are not regular and I had to leave earlier than the 10 days of my visa. I was expecting this trip to be very uncomfortable but it was the opposite. It was one of the most pleasant travel moments I've had so far. I was with truck drivers from Ukraine and Kazakhstan and we had a lot of fun together. 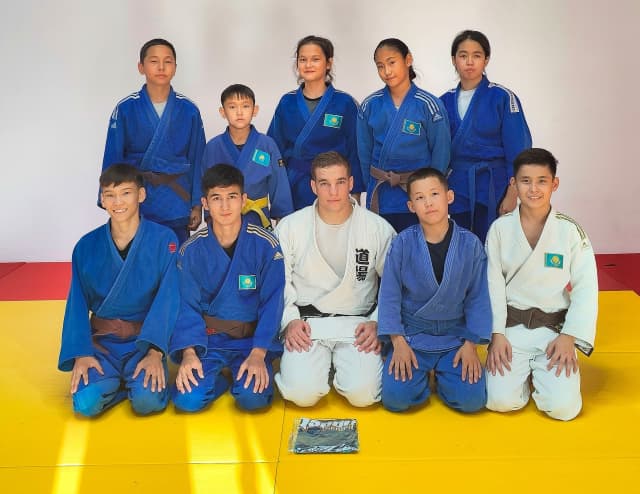 I arrived in Kazakhstan in the city of Aktau. After two day recovery, I had to take a train in a hurry again. One club wanted to see me but I couldn't visit them. It was still the summer holidays and all trains were quite full. I found a last minute train from Aktau to Nur-Sultan, previously known as Astana, the capital city which is 2800km away. I went on that train for a crazy 50 hour journey, without even a proper shower. I spent the journey with a Kazakh babushka (grandma) and two other people in a 2 square metre wagon. Nobody could speak English. At the beginning I thought it would be very complicated for me but it turned out to be really nice. I know some basic Russian because I’ve been studying it ready to travel to those Ex-Soviet regions, so we could communicate a bit and learned about each other's lives.

In Nur-Sultan, the judo centre was waiting for me. Aigerim Toxanbek, the media manager of the federation, reached out to me and explained that she'll take care of my time in the city. Aigerim and her friend Ayakoz, who is a fluent French speaker, as well as the judo coaches, were guiding me everywhere to discover the city and teach judo in different places. I mostly taught children and did some interviews again. I noticed that the children were extremely disciplined in that region. As soon as they see you they run towards you to bow. Then they hold your hand and cover it with their second hand.

I was staying in the centre with the coach and even though the communication was not always easy, we developed a true friendship, with the last day being just amazing. First we went partying with Ayakoz and Aigerim. It was a memorable night in the capital. We sung some of the most popular French songs out loud. 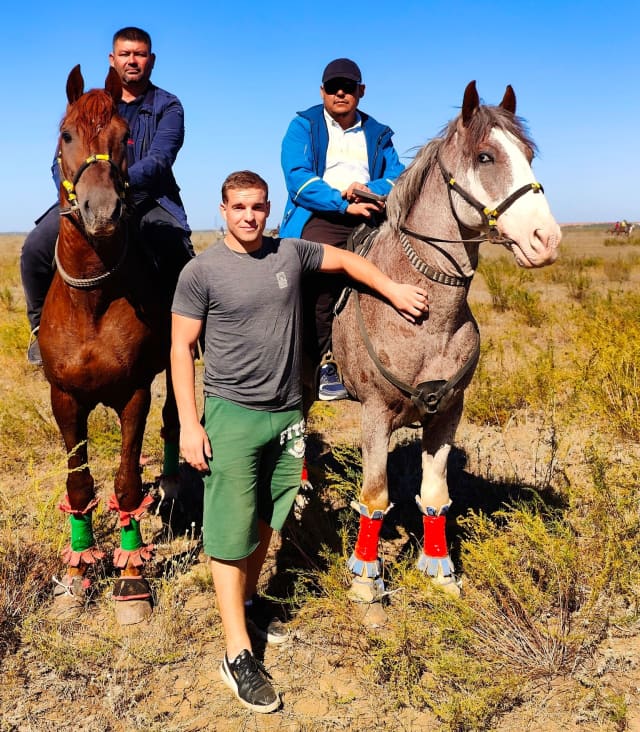 The next day we went to see a traditional sport, the Kok-Par. It is a sport that exists in Kazakhstan and other countries of this region, such as Azerbaijan and Kyrgysztan. There are two teams which have to put their ball on the other side of the field while running on horses. Usually the ball is a dead sheep but here is was not. Horses are very present in the culture of Kazakhstan.

I was made to feel extremely welcome; they covered me with gifts and applause. Everyone was taking photos with me. Actually this is something that happened in random places in Kazakhstan quite often. They were among the nicest people I’ve met so far but I still had then feeling of sand in my eyes knowing that I had to jump on the next night train to Almaty already. I cannot thank them enough for such kindness. Once again my heart was heavy, leaving those people.

The next day, I arrived in Almaty where I am at the moment. I've met Isa, the coach of Judo Club Almaty. We dropped my luggage at my hostel and went directly to the mountains around the city to discover how wonderful it was. After that I thought I’d go back to the hostel to take a shower and rest but no, the Kazakh’s generosity was too strong and we kept going all day until late at night, discovering the city and different places. Isa organised everything to make it fit with my project. He wanted to invite me to his place but he's about to move to a new apartment so it wasn't possible. 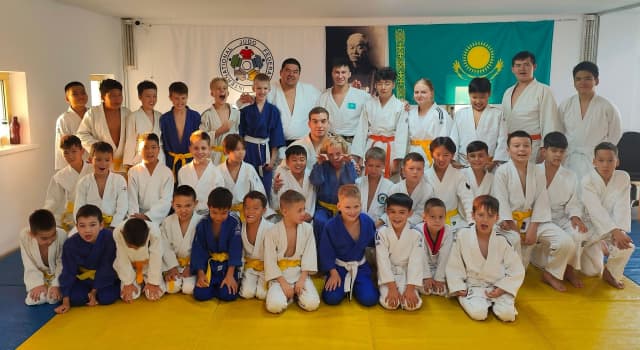 I also went to another dojo called Club Champion Judo. It was mainly children, including teenagers, many girls and some of them were very strong, such as Madina Paragulgova, a silver medallist at a world championships for cadets. I was happy to spend time with them. So far during my project I've learned a lot of tips and tricks, so when I teach children it's just basic judo, since they are beginners, but when I teach competitors I can exploit the full potential of this project and this is very satisfying.

I'm now leaving to my next country, Kyrgyzstan. All these countries are totally unknown for me and I love discovering everything. There the federation is waiting for me and I know it'll be another very pleasant moment. I'll then go to Uzbekistan for the World Championships and I hope to catch up with many friends there. 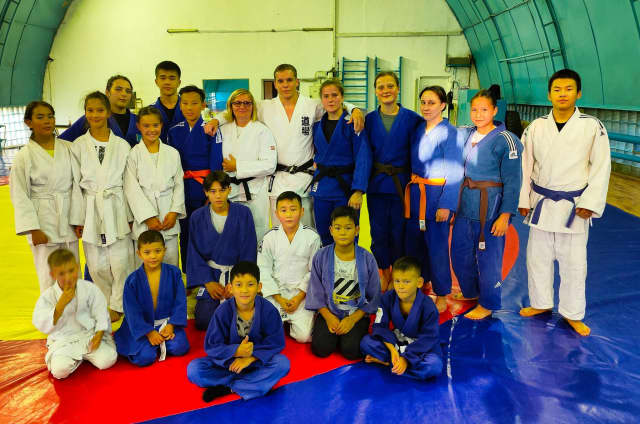 Then time will start to be a little complicated. By travelling to that region, I kind of put myself in a dead end. My original plan was to go east through China but China has one of the most strict Covid protocols in the world and it is still closed for people like me. I checked if I could take a boat to Iran but there are not any available. The politic situation not far from here also has an impact on my decisions and so I have to be careful about my coming choices.

That leads me to 3 possibilities:

- I keep taking my time in Kyrgyzstan and Uzbekistan. Then maybe China will re-open. There has been some improvement recently for students and workers.

- I use my ‘Joker’ of flying. My project is a no-flight project but if I have personal or family issues I can fly. Also if there are geopolitical problems that offer no other option I may have to do it but I feel bad about it so I’m currently trying to find another way.

- I go back by boat to Azerbaijan to then reach Iran but I would need some complicated special permissions again.

I will have the answer by the next article. Thanks for your attention and don't hesitate to follow the adventure on my social media Thejudonomad.