Majlinda Kelmendi Hangs Up her Red and Gold Back Patches

Written by Jo Crowley on 12. Oct 2021
Photographs by Gabriela Sabau
Share
For some years European news was peppered with stories from Kosovo, part of a politically volatile situation that caused devastation in the region. In 2008 a new and independent Kosovo was born and a period of rebuilding and stability began. This gave rise to opportunity, initiative and commitment in so many fields, from art to sport and anything between. 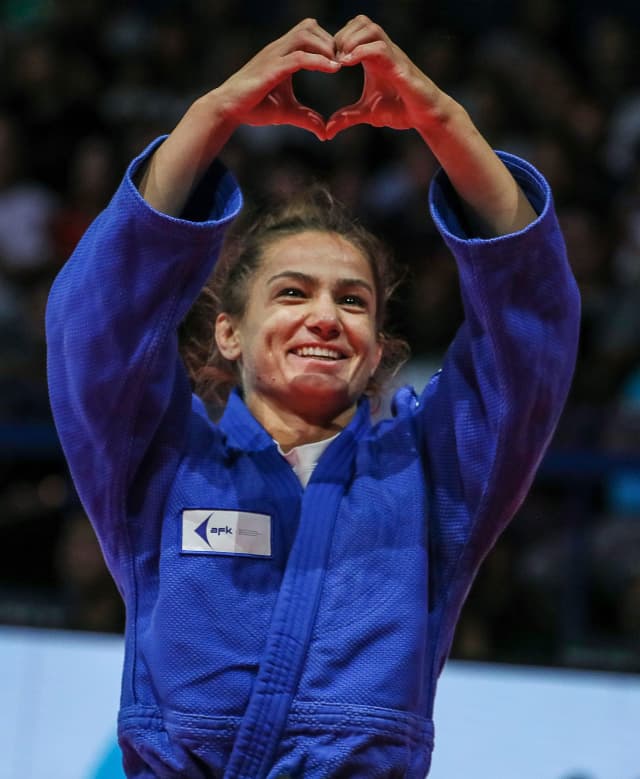 A young teen in Peja, Kosovo was already working hard with her judo coach, Mr Driton Kuka. She had won a Cadet tournament in Zagreb the previous year and it, it turns out, was indicative of a phenomenal career and an unrivalled place in the history of her young country.

Junior world champion in 2009, at 18 years old, Majlinda Kelmendi then won gold at her first grand prix in Tunisia in 2010, still a teenager and from then on a profile was built, claiming title after title, dominating the -52kg category of world judo like no-one before. 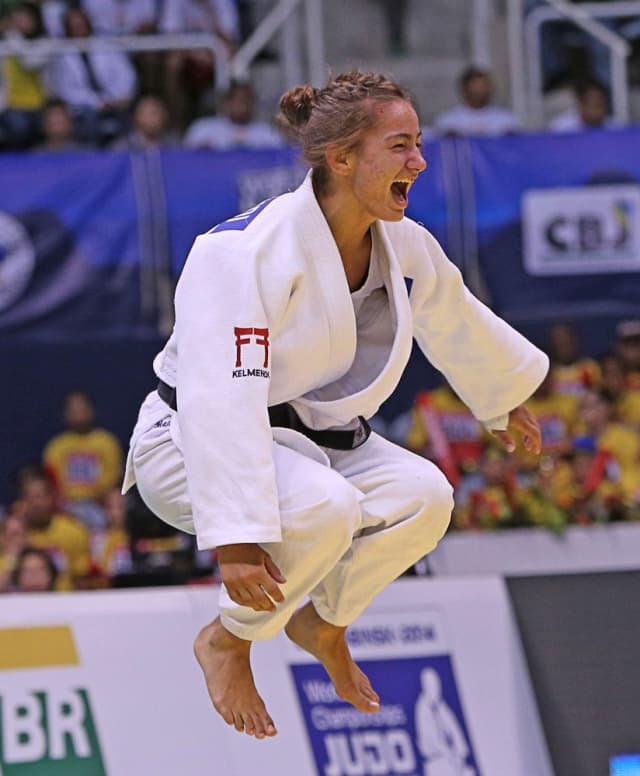 Majlinda has twice been world champion and in Rio De Janeiro in 2016 she claimed the Olympic title and this was a first for Kosovo; not just a first for Kosovan judo but for all sports. Kosovo had its first ever Olympic medallist, its first Olympic champion.

Her CV is extensive and it feels unfair to not touch on every element of it because it is an investment few can understand, that gives rise to a career such as this. We have covered a little of her cadet and junior years and the world championships and of course that monumental Olympic medal but Kelmendi was also 4 times European champion. She conquered the continent and the world and also embodied the full spirit of the Olympic movement and she did so quietly; forever just working hard on being the best athlete she could be, never jumping in front of spotlights or calling for attention, just working.

It doesn’t take too long a conversation to realise why she stayed so humble and committed to her sporting goals. Majlinda has carried the extraordinary weight of a country on her back since the first days of her international appearances. To some degree that has been imposed on her but the majority of it is hers, an integral part of who she is. She felt the responsibility to shine positivity on her small country, to never let them down and we have seen it clearly, time and time again. She doesn’t fight just for Majlinda or even for her teammates. She fights for Kosovo, knowing that her achievements give space for other girls, other young judoka to believe in the beauty of possibility. 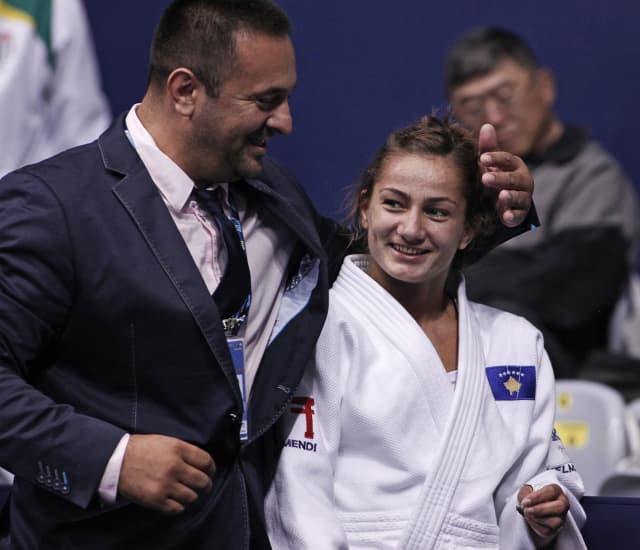 Her coach, Driton Kuka has his own opinion on this, “Majlinda is a heroine for all the people of Kosovo. She is more than just a judoka and world and Olympic champion. Thanks to her, we became a member of the IJF and of the IOC. When Mr Vizer visited Kosovo for the first time, she was maybe 14 or 15 and it's when he saw her training that he decided to support us. The first world competition we participated in as Kosovo was the Junior World Championships in 2009 and she won the title. She has been a key to the development of our sport in the country. That's why she is more than an athlete. She is and was my athlete, but she is so much more, my heroine, just as she is for every single person in Kosovo.”

This week Majlinda has announced officially that she has retired from competition. We all knew it was coming and it does feel like the closing of a great novel, with a formidable protagonist. We don’t want it to end but it is necessary for the next chapter of Kelmendi’s life to take shape. 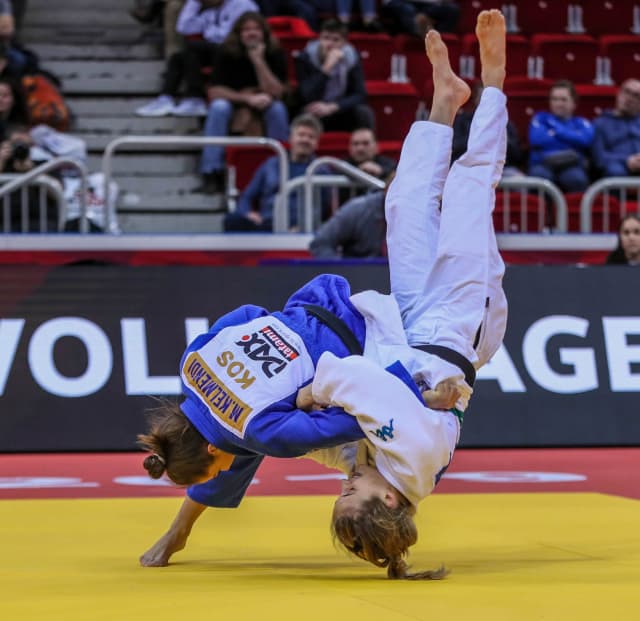 With the 2021 Paris Grand Slam just ahead of us, we understand that it will be an unusual draw for the -52kg category, without Majlinda at the top of it. She was world number one and sat in the white judogi at the top of so many contest sheets.

In 2014, already world champion from the year before in Rio, an incredible run of 4 years standing on top of the podium in Paris, began. Paris, as any judoka who has fought there will tell you, is a very special tournament and it takes a whole new level of courage to fight there, withstanding the most knowledgeable crowd, the biggest, loudest audience of any judo event, anywhere in the world. Coming into that event in February 2014, with a target on your back and a skilled and French-heavy draw in front of you, is not for the faint-hearted and Majlinda took it on with the spirit of a warrior, winning gold not only in 2014, but in 2015, 2016 and 2017 as well. Not many ever earn the prima cheers of the Bercy, but to do it 4 times in a row is truly outstanding. 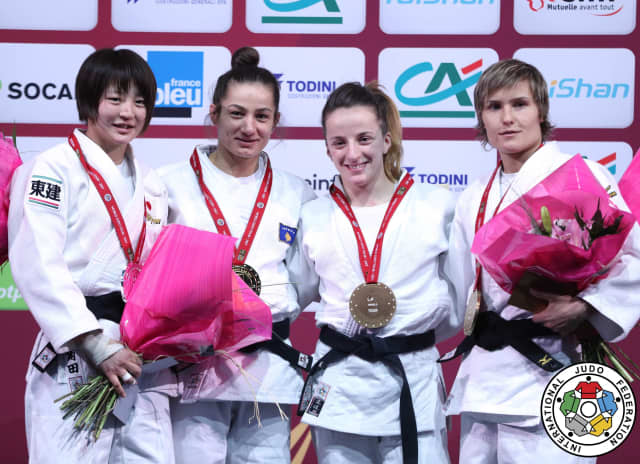 Majlinda's fourth Paris win, with her teammate and future Olympic champion, Distria Krasniqi, beside her

This coming week in Paris, Majlinda Kelmendi will not have her feet on the tatami but she will stay in contact with it, moving in a different direction. She is now dedicated to sharing her experience and expertise with the younger judoka of Kosovo and Kuka is keen to get started, “Now that she retires from competition, I want her to be next to me on the tatami because I want her to bring her experience, her knowledge and her fantastic spirit.” He is not alone in wishing her the strongest next steps.

Retirement is hard, such a leap away from an intensity that can’t be replicated easily elsewhere. With coaching and seeing the power of her legacy, a continuation of what she has started can be assured. It is already visible. We witnessed her teammates Krasniqi and Gjakova storm to Olympic gold in Tokyo, undoubtedly fuelled by the successes Majlinda showed them were possible. Now there are 3 Kosovan Olympic champions and it all started with Majlinda. There will be more, no doubt! 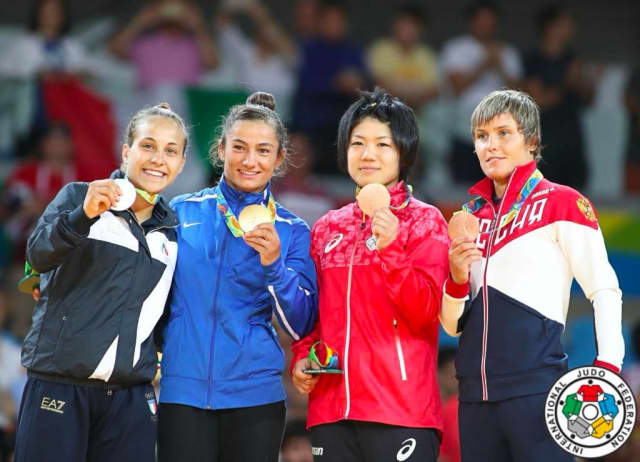 Dr Lisa Allan, IJF Events Director said, “We will miss her performing on the tatami but we all look forward to seeing her in the coaches’ chair. We need more female coaches and it is great to see former top athletes like Majlinda transitioning into the next stage of their judo career. She is a fantastic role model. Her dedication, experience and work ethic will be an inspiration to the athletes she coaches. We wish her all the best and a lot of success in her future.”

And that’s it! It’s the end of a special reign that gave not just Kosovo, but the whole judo world, a new heroine, one who took the first steps in public for a new country, showing everyone that with an adherence to the values of respect, humility and courage, anything can be achieved.

To our dearest Majlinda, continue to live with the same spirit and know that your legacy is the ignition of a whole nation. That is so very special. 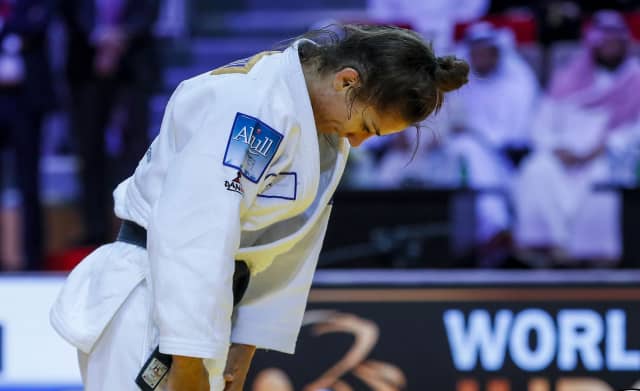