By Mark Pickering on 18. May 2017
Share
When you work all your life towards something, living out your dreams, doing what you were born to do, and in a heartbeat you’re told that your time has been, you have two options.

Do you accept it, appreciate all you accomplished and hang up your judogi or do you continue to live out your passion and do things on your terms.

That is a decision London 2012 and Rio 2016 Olympian Miryam Roper, 34, had to make after the first Games in South America.

Roper, who represented the German national team since the age of 25, went to two Olympics for her country, won three continental medals, a world bronze, two Grand Slam gold medals and 10 Grand Prix medals in close to a decade of competition for one of Europe’s most capable nations. 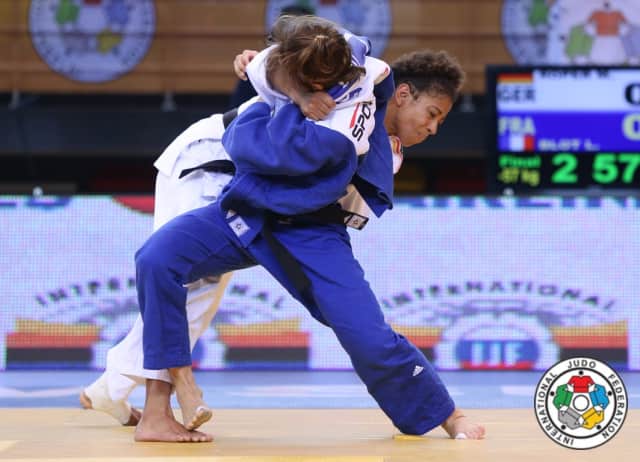 The -57kg judoka, who was born in Germany to a German mother and Panamanian father, feels like she has plenty for more to give and to achieve in the sport.

Polyglot Roper, a German, French and English speaker, is now working on her Spanish having decided to represent her father’s country and has already worn the flag of Panama in competition (5th place at Pan American Championships 2017). 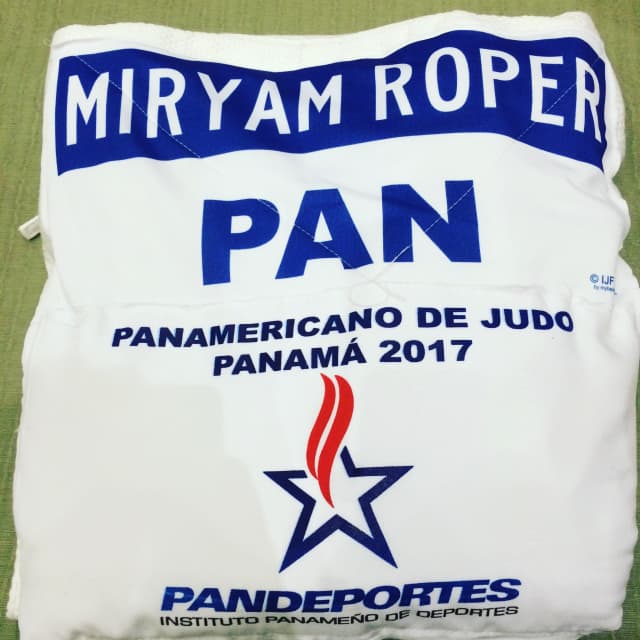 Ahead of making her IJF World Judo Tour return, with the financial support of the IJF, under the new colours of Panama on Saturday at #JudoRussia2017, Roper spoke exclusively to the IJF about the switch, her career to date, her Olympic experiences, post-Rio training regime, the state of Panamanian judo, the future and the feeling of competing for a different nation.

Q: Take us back to Rio 2016 – tell us about the day and your experience. Is it a consolation now that you lost to the eventual champion?
A: That day went wrong. What could go wrong, above all, l I fought a Rafaela Silva who was just unbeatable that day. But that is no consolation. I can’t be content because I didn’t fight at my best.

Q: How did the Olympic experience feel compared to London 2012?
A: It is hard to compare. I had incredible moments and feelings in both Olympic Games. For example, I haven’t been to the Opening Ceremony in London. I will never forget the emotions to enter the Maracana Stadium side by side with Laura Vargas Koch.

Q: After the Games did you always plan to continue competing?
A: Before the Games, I already planned to fight at least until the World Championships 2017. After the Games I took a break from everything, no judo, no sports, just me enjoying free time. But after six weeks I was missing judo so much that I went to a judo training during my vacation in France and I enjoyed it.

Q: What was the situation with the German Judo Federation? How did you feel at this time?
A: The German Sports system, in my opinion in general is struggling, not only judo. They told me that they wanted to focus on the Tokyo 2020 team right away and would prefer the young talents because they didn’t believe I would do another full Olympic cycle. The way they behaved was disrespectful. That was really disappointing. 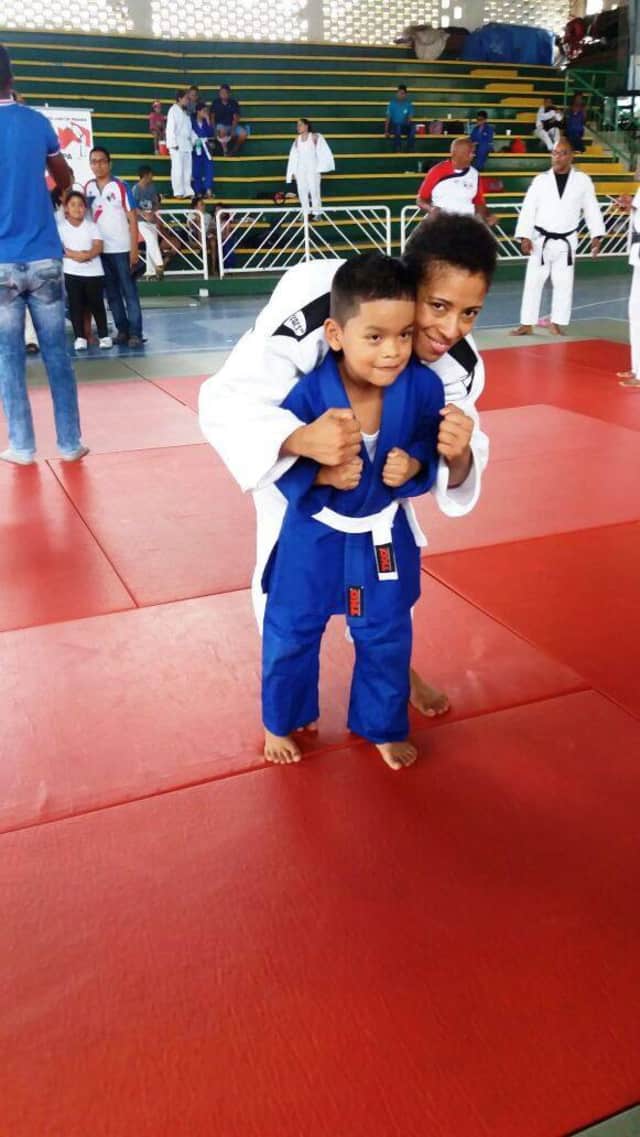 Q: Did you think about stopping?
A: No, I prefer to choose my own faith. It is my right to decide what I do with my life and my career as an athlete. It was a situation I already knew because in the beginning of my career the German Federation also didn’t believe in me. Only my coach Michael Bazynski. For a brief moment I was thinking about accepting the challenge, because I knew I could. But then, I didn’t want to work with people with whom I didn’t share the same values. And then there was Panama, I had already thought about representing my father’s country in my twenties. In the last years, my family over there asked me why I didn’t switch, so this was the opportunity.

Q: Do you feel you can still repeat the World and continental medals again?
A: If I didn’t believe I could win, I wouldn’t fight.

Q: Tell me about your family ties with Panama. When did you go first go there and what was your experience?
A: I have a big family in Panama and in Germany. So I am blessed. The first time I went to Panama, I felt in love with the nature, the beautiful beaches, the million different shades of green and the breathtaking butterflies. But it was a little bit difficult because I didn’t speak Spanish at that time and I’m a vegetarian. 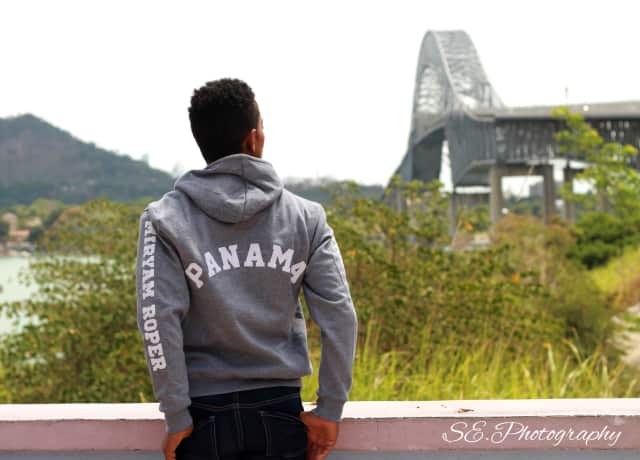 Q: How is your Spanish? How are you learning now? Tutor?
A: Now, I am speaking Spanish quite well. I am also studying Spanish and French literature and linguistics. I have an accent though. I speak English, German and French and a little bit Portuguese.

Q: What is the process of changing countries?
A: You have to inform the IJF about your wish and present your passport. Normally there is a sanction for switching countries of three years but this can be abolished if both countries agree. So I had to also present a letter of acceptance by the United Panamanian Judo Federation and a letter of the German Federation stating they don’t oppose and relinquish the ban.

Q: What did you have to do?
A: A lot. I am Panamanian of direct descent but my father didn’t register us as children in Panama, so the process of obtaining the passport was more complicated and needed some preparation. But with the help of the Federation and the President, Ms Estela Riley and my family in Panama in the end I had my passport quite fast. Also I had an athlete’s contract with the German army that I had to dissolve.

Q: What reaction did you receive from the IJF and Panama Judo Federation and their judoka?
A: Everybody welcomed me with open arms. The IJF didn’t oppose to the switch and offered me their help.

Q: Where have you been training since the Rio Olympics?
A: My life is still based in Cologne, Germany where I am also studying. I am still training with the same group at the Olympic Centre, my friends are still my friends. But I have also been in Papendal at the Dutch National Training Center where my longtime coach Michael Bazynski is now National Coach and I am really thankful to the Dutch Federation that I can train there, too. It´s one of the best things in judo that it is like a family and you are welcome in any dojo. I also was in Valencia with Laura Gomez and Sugoi Uriarte for a training camp on Eastern.

Q: When did you receive confirmation that you will represent Panama and what was your reaction?
A: End of March. I was relieved. Even though I fulfilled all the requirements, I was worrying a lot that something still would go wrong.

Q: Do you see this as a full cycle towards Tokyo 2020 or will you take it one year at a time?
A: I am realistic, at my age three years is a long time so of course I take it day by day. But that doesn’t mean that I don’t want to go to Tokyo. It would be a dream come true to represent also my father’s country of Panama at the Olympics. 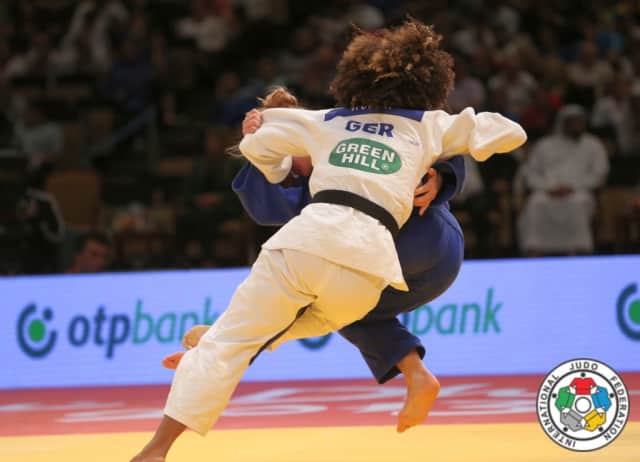 Q: What are your goals now as a Panama team member?  Can you tell me about the state of judo in Panama? What is the level of judo and participation? Is there a lot of potential there? What can we expect from you in 2017 and what are your goals?
A: My planning is for the World Championships. I am aiming to win the first medal for Panama. Also I hope to be resourceful with my long experience and knowledge to the judo in Panama. It is a very young federation so there is still room to improve. In Panama, in general, there is not a big sports culture but the Federation is seeking to build an infrastructure with new coaches from Cuba and Venezuela like Javier Guedes. Mostly there are children so it will take time. I have seen some real talents amongst the youngsters though.

Q: It must seem like fate that you will make your debut for your new country in Panama at the Continental Championships! How does it feel wearing the Panama flag now and what are your thoughts and emotions ahead of the event?
A: It was a great experience to fight in front of my Panamanian family. To hear my name with my father’s country filled me with pride and it felt surprisingly normal. I thought it would be weird. I felt a lot of pressure though. It was a long time without a competition. I was only fighting team which is different. It was my first competition with the new rules, new coach on the chair, new team and knowing about my short preparation, I was way out my comfort zone. Nevertheless, alone the joy and pride in the eyes of my family was worth it.

Miryam Roper fights for Panama for the first time on IJF World Judo Tour on Saturday. Watch #JudoRussia2017 live and free at www.ippon.tv