Written by Esther Stam on 26. May 2021
Share
It’s evident that Paralympic judo is developing rapidly. At each subsequent IBSA tournament, we see new faces stepping on to the podium. Today we saw newcomers Ina KALDANI of Georgia and Zhanbota AMANZHOL (KAZ) picking up bronze medals, but the best example comes from Uzbekistan. Davurkhon KAROMATOV first appeared only two years ago, in 2019, and has won every grand prix he has entered since. Today he collected his third gold medal at -81kg. 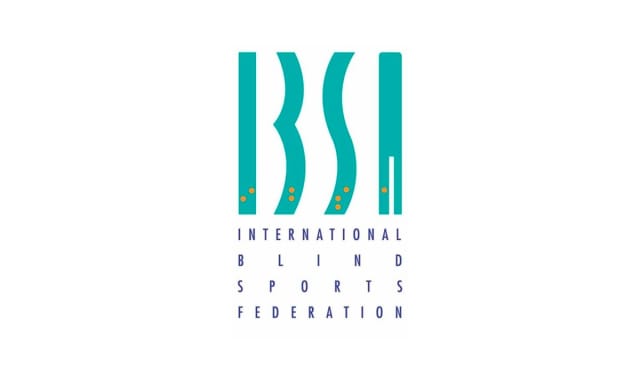 IBSA Sports Director Janos Tardos explains, “We see that the collaboration between IBSA and the IJF is very fruitful. The decision to select IJF referees for IBSA tournaments was a good decision. We adjusted some details in the rules to bring the IBSA judo closer to IJF judo and to make it more attractive. Next to that the whole look and feel became more professional. This is essential for it to become a mature and recognisable fixture.

In the past the difference between the top judoka and the rest was very marked. At the beginning of the day, you could make many predictions about who would win. Today it’s unsure who will be the medallists, as there are more favourites and more diversity among the athletes with an impressive skill level. We see the new faces and the much higher level of techniques and tactics. For me this is a clear indication of the improvement and the tightening of every aspect of IBSA judo.”

Jhon Ramaekers, IJF and IBSA referee, agrees with Tardos. “A lot of people were focused on the difference between IBSA and IJF judo, but we focus on the similarity. The difference in rules is very small. What I see is attractive and exciting judo. A motto of the Olympic and Paralympic Games is ‘unity in diversity’. For me IBSA judo, with its community, is a textbook example.” 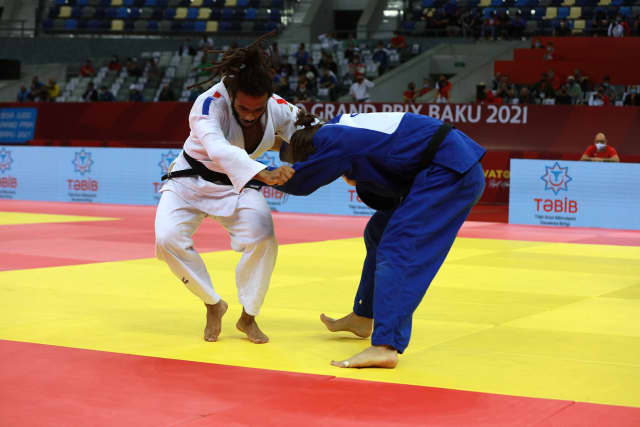 -81kg Since the arrival of Davurkhon KAROMATOV (UZB) on the IBSA judo circuit in 2019, he has looked unstoppable. In the final it didn’t take long before he threw home favourite Huseyn RAHIMLI (AZE) with a textbook koshi guruma. 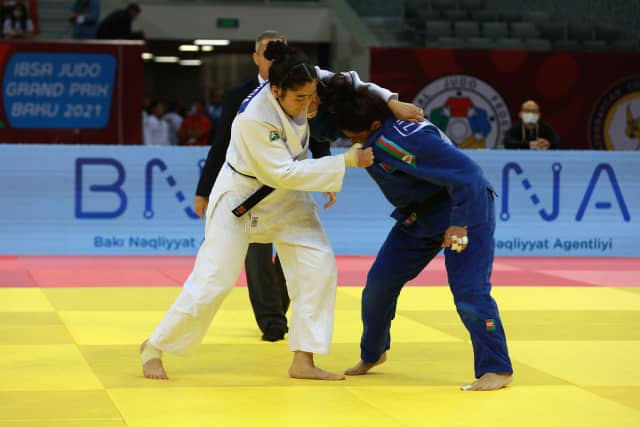 -63kg Khanim HUSEYNOVA (AZE) is growing at each tournament. After becoming European champion in 2019, she claimed her first grand prix title today, on home soil. After scoring waza-ari with a counter, she wasn’t threatened anymore by world medalist Olga POZDNYSHEVA of Russia. Another gold for Azerbaijan!

Final POZDNYSHEVA, Olga B2 (RUS) vs. HUSEYNOVA, Khanim B3 (AZE) 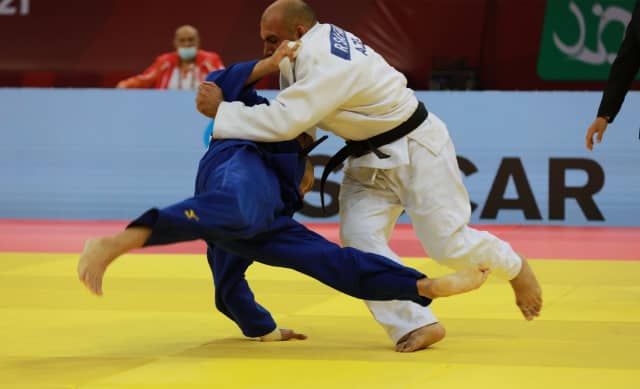 One of the highligts of today was the increasingly exciting judo of Zhanbota AMANZHOL of Kazakhstan. With an impressive attack rate, he gave a hard time to number two seed Vahid NOURI of Iran, losing out by only a minimal difference. He overpowered Shukhrat BOBOEV (UZB) in his medal contest though and collected a bronze medal at his first appearance at an IBSA grand prix.

The final was between the two top seeds Oleksandr NAZARENKO of Ukraine and Vahid NOURI of Iran. Strangely, these two, a world champion and winners of multiple grand prix, had never met before. In a very tactical final a beautiful de-ashi-barai from NAZARENKO was enough for a waza-ari score and the win.

Final NAZARENKO, Oleksandr B2 (UKR) vs. NOURI, Vahid B2 (IRI) 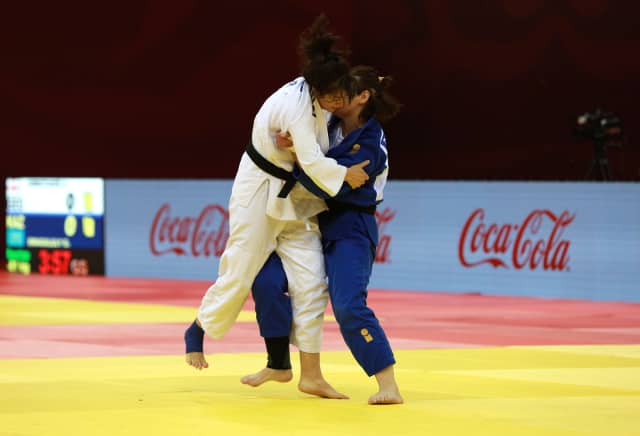 -70kg The other newcomer to be mentioned is Ina KALDANI of Georgia. She caused a big upset, beating the current Paralympic champion Lenia Fabiola RUVALCABA ALVAREZ of Mexico. With a lightning fast transition to the ground and a slick shime-waza, she forced RUVALCABA ALVAREZ to tap out.

Number one seed Alana MALDONADO of Brazil wasn’t threatened at all during the day. With strong, controlled judo she looked secure all day. In the final, against one of the most experienced judoka of the tournament, Zulfiyya HUSEYNOVA (AZE), she opened the scoring with a left uchi-mata. Not long after that, she secured the win and her position as top favourite with a successful shime-waza. Tokyo looks promising for MALDONADO.

Final MALDONADO, Alana B2 (BRA) vs. HUSEYNOVA, Zulfiyya B3 (AZE) 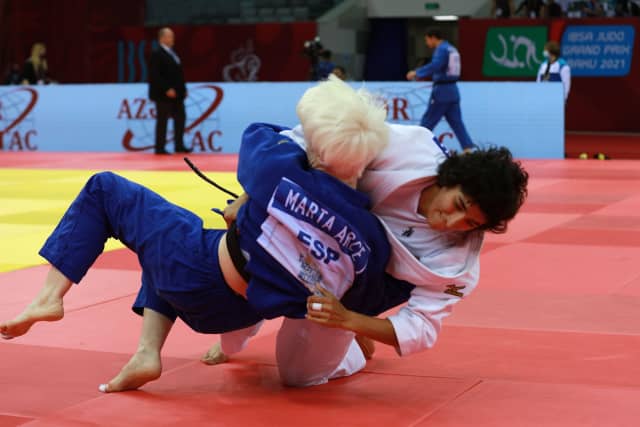 -100kg Paralympic and multiple world champion Zviad GOGOTCHURI of Georgia returned to the field today and showed himself to be in great shape. The same could be said for number one seed and ne-waza specialist Christopher SKELLEY of Great Britain. GOGOTCHURI played an intelligent and tactical match by not engaging in any ground work exchanges with SKELLEY and instead opened the scoring in tachi-waza, after two minutes. After that, SKELLEY had no choice but to take more risks and was eventually countered for a second waza-ari.

Bronze medals were awarded to Sulaymon ALAEV and Sharif KHALILOV, both members of the Uzbek team. It seems Uzbekistan is making great strides in both the IJF and IBSA world tours. 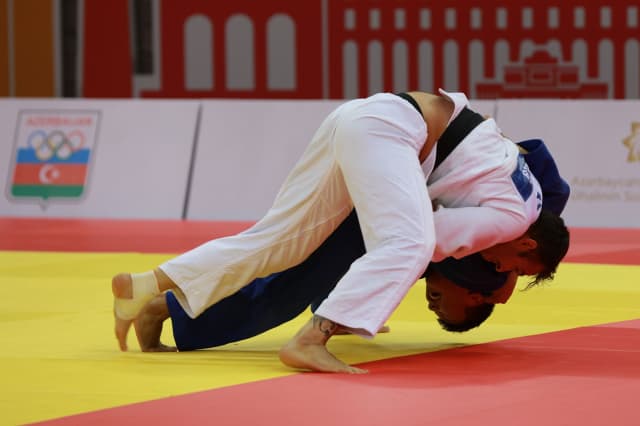 +70kg European champion Carolina COSTA of Italy was on form today, winning to reach the final without any trouble. She was only stopped by number two seed Meg EMMERICH of Brazil. EMMERICH made clever use of her opponent’s movement, throwing COSTA for a beautiful ippon.

Bronze medals were presented to Zarina BAIBATINA of Kazakhstan and Rebeca SILVA of Brazil. 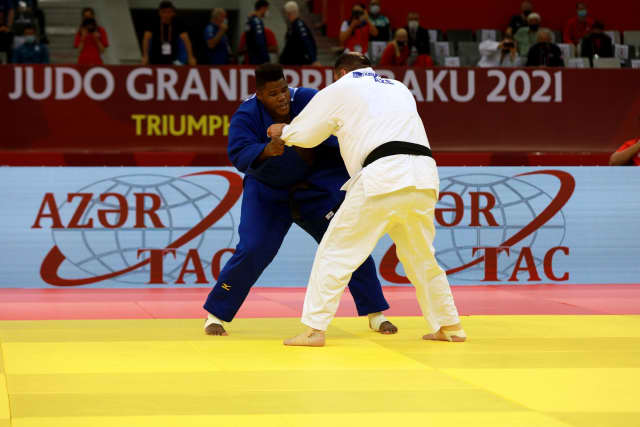 In the +100kg category we saw a dream clash between the number one and two seeds, Shirin SHARIPOV (IZB) and current world champion Mohammadreza KHEIROLLAHZADEH (IRI). Having met five times before, it was a challenging battle for them both. Although KHEIROLLAHZADEH began strongly, it was SHARIPOV who opened the score card. After that the balance changed dramatically in favour of SHARIPOV, who successfully defended his waza-ari lead and took another gold medal for the increasingly impressive Uzbek team.

Bronze medals were for Gwang Geun CHOI (KOR) and Yordani FERNANDEZ SASTRE (CUB), giving the podium and the category as a whole an interesting diversity, one that will be tested further in Tokyo.

Final KHEIROLLAHZADEH, Mohammadreza B2 (IRI) vs. SHARIPOV, Shirin B3 (UZB)

Thanks to the collaboration with the IJF, the Azerbaijan Paralympic Committee and the Azerbaijan Judo Federation, we concluded a very successful tournament, with a positive feeling as the 2021 IBSA Judo Grand Prix in Baku moves along to its final destination before Tokyo. The sole remaining qualifier for the Paralympics will be held in Warwick, Great Britain, from 19th-20th June.