07. Aug 2016
Share
The Rio 2016 Olympic Games officially started on Saturday as the judo competition opened with a riveting and historic day at the Carioca Arena 2 in the heart of the Olympic Park.

The Rio 2016 Olympic Games officially started on Saturday as the judo competition opened with a riveting and historic day at the Carioca Arena 2 in the heart of the Olympic park.

On the opening day, the world witnessed new Olympic champions being crowned in the men’s -60kg and women’s -48kg category.

Mr. Marius VIZER, IJF President, had high praise for the opening day of judo at the Rio 2016 Olympic Games.

“
“It was a great start to the competition, a great first day for judo at the Olympic Games,” said Mr. VIZER. “We had a fantastic show with spectacular judo, a great public and a great atmosphere. We crowned two new Olympic champions in beautiful victories. The results were very well deserved and it was a transparent, open success. “All went well from an organisational point of view and I eagerly await the second day of competition.”
Marius Vizer, president of interneational judo fedaration 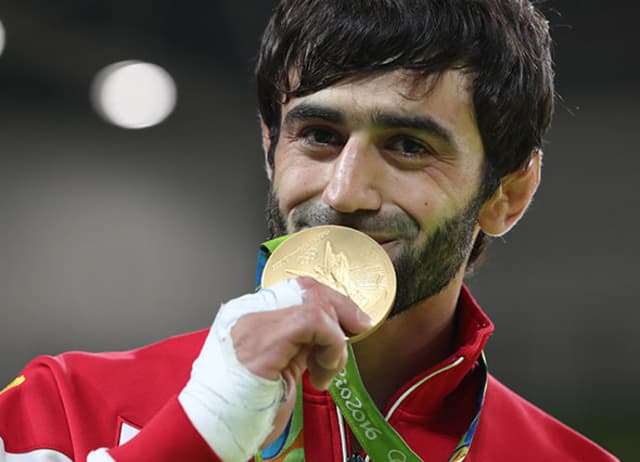 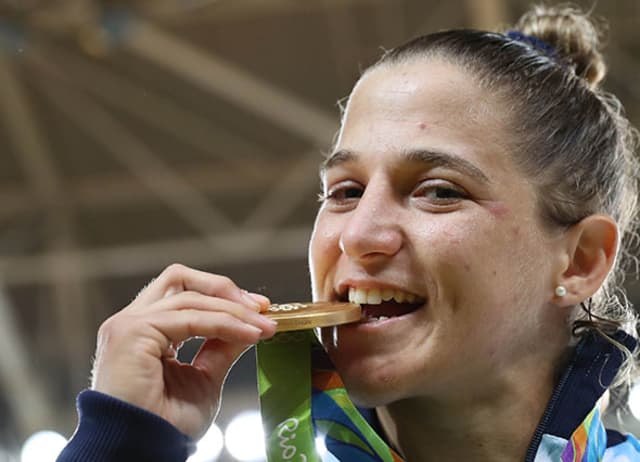 The words of the IJF President resonated with the global audience as judo was the number one trend in the world on Twitter during the final block. The exhilarating sport continues to break down barriers, reach more territories and attract new fans with its modern feel, pulse-pounding action and athletes who are more than champions. 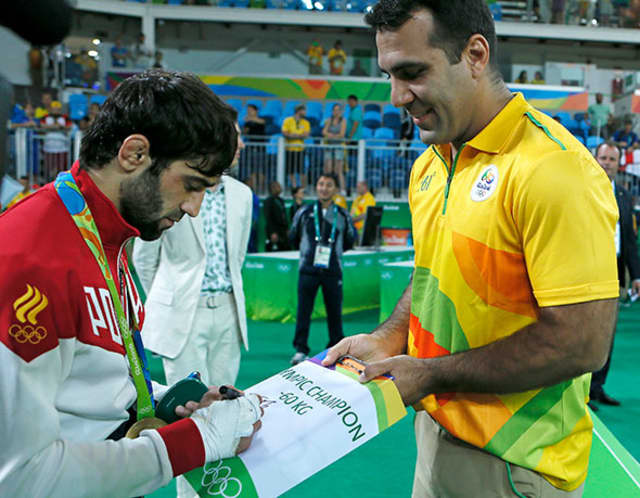 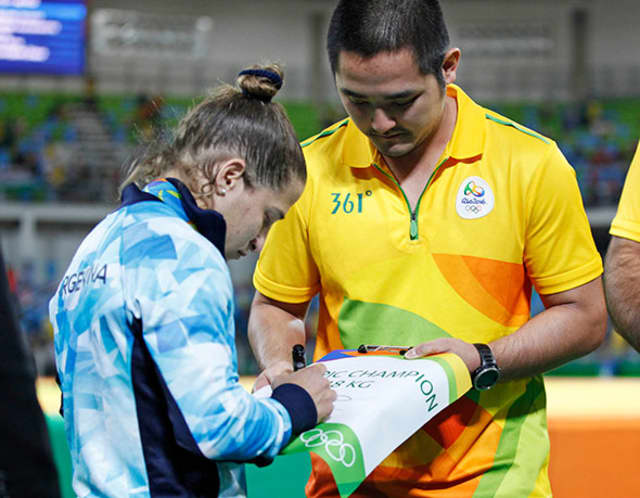 Honoured guests on day one, as a symbol of the sport's place with the Olympic movement and the world, included: 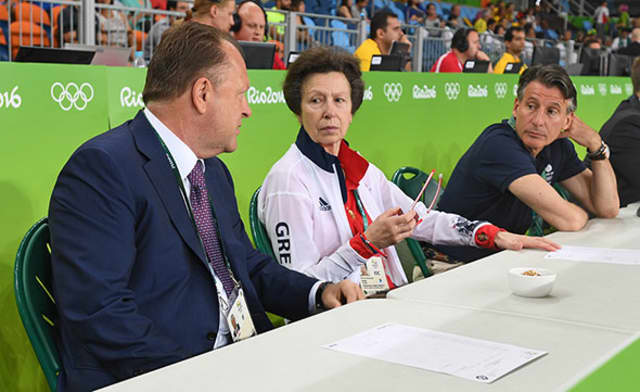 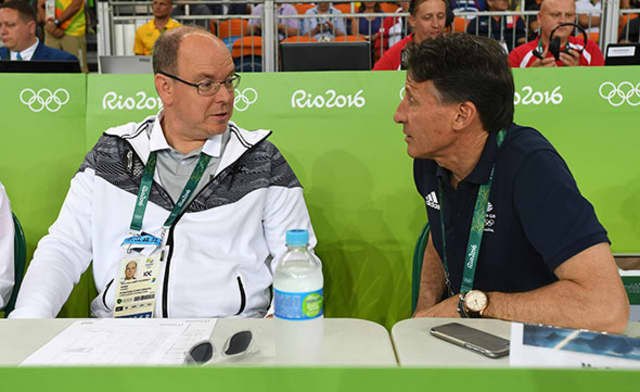 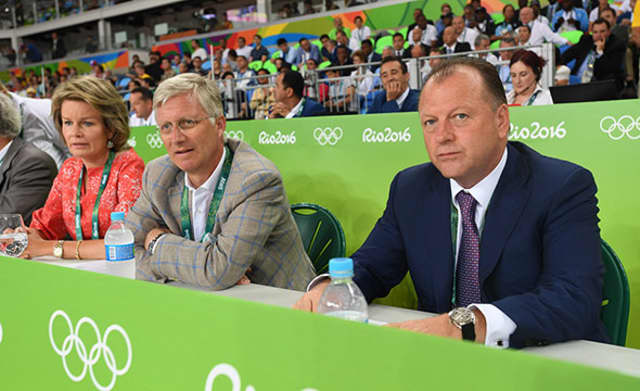 The Rio 2016 Olympic Games judo event continues on Monday with the men’s -66kg and women’s 52kg categories taking to the tatami.

World champion Paula PARETO became Argentina’s first Olympic judo champion with a heroic performance as the veteran fighter thrilled the innumerable travelling fans. PARETO, 30, won bronze at the Beijing 2008 Olympics and etched her name into the record books of her country today by winning all four of her contests including the gold medal contest against world bronze medallist JEONG Bokyeong (KOR). Many judo fans believed we had seen the best of PARETO in Beijing but the vastly underrated pocket-sized fighter won the World Championships last year and had more belief and quality than all of her rivals on the grandest stage of all in Rio de Janeiro. 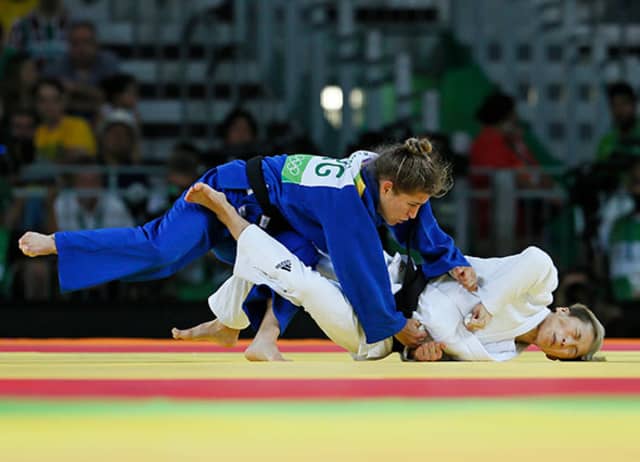 In the final PARETO scored a waza-ari at the halfway point to open the scoring with a ko-uchi-gari and that proved to be the only score of the contest. The result sparked incredible scenes as PARETO went to the crowd to share the greatest moment of her life with her friends and family. PARETO reappeared with the Argentine flag and entered the mixed zone with the tears flowing and her heart still pounding. 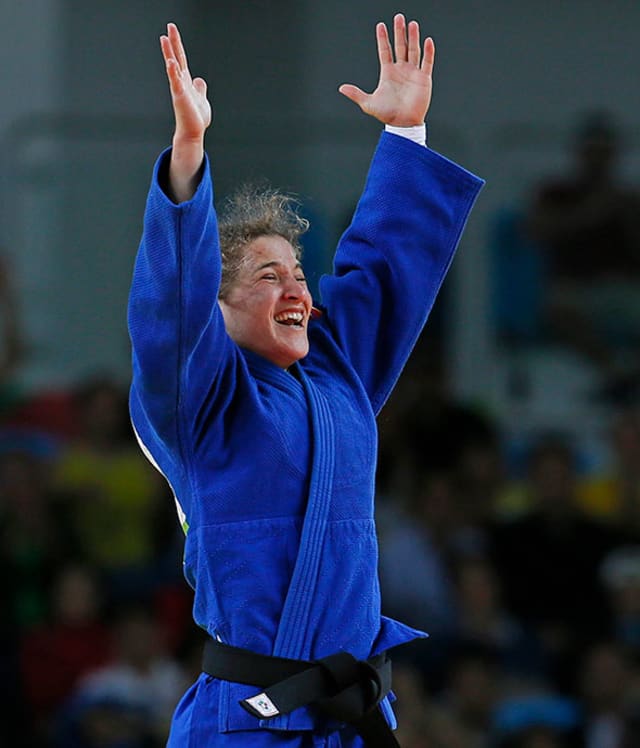 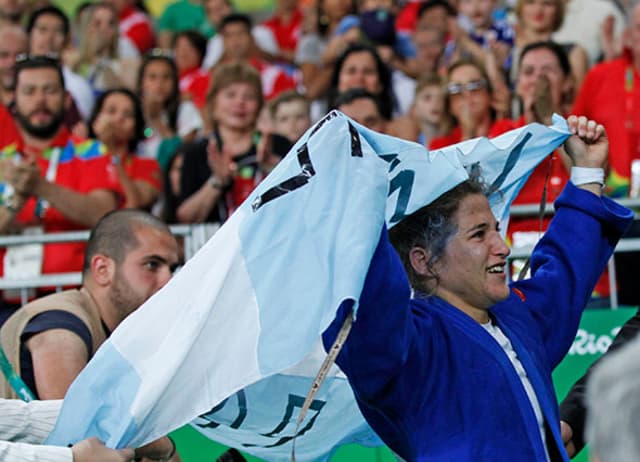 The Argentine ace defeated former world champion KONDO Ami (JPN) in the semi-finals by a waza-ari as her experience and fight management enabled her to find a way past the resolute young Japanese athlete and Olympic debutant.

In the second semi-final JEONG defeated Pan American Championships bronze medallist Dayaris MESTRE ALVAREZ (CUB) by ippon to guarantee at least a silver medal for one of judo’s strongest nations on day one.

The first -48kg Olympic bronze medal contest was a battle of former world champions as KONDO Ami (JPN) faced MUNKHBAT Urantsetseg (MGL). The contest was all-square until World Judo Masters winner KONDO just beat the clock to throw her Mongolian opponent with an osoto-gari for a yuko score. After fulfilling her media obligations IJF Hall of Famer and IJF Development Director YAMASHITA Yasuhiro – one of the most celebrated judoka in the history of the sport – was waiting to congratulate her.

The second -48kg bronze medal was won by Otgontsetseg GALBADRAKH (KAZ) who defeated MESTRE ALVAREZ (CUB) with a tani-otoshi for ippon after two minutes. GALBADRAKH switched from representing her native Mongolia to Kazakhstan in August of 2015 at which point her Olympic qualification points total was reset to zero and she had to start over. The Almaty Grand Prix winner not only qualified by putting together a strong of super medal-winning displays but qualified as one of the top seeds and took her career to new heights again on day one in Brazil.

Defending Olympic champion Sarah MENEZES (BRA) edged past Olympic bronze medallist Charline VAN SNICK (BEL) for a place in last eight by a yuko score before falling in the quarter-finals to MESTRE ALVAREZ as Brazil’s leading gold medal hope on day one tapped out to a juji-gatame. 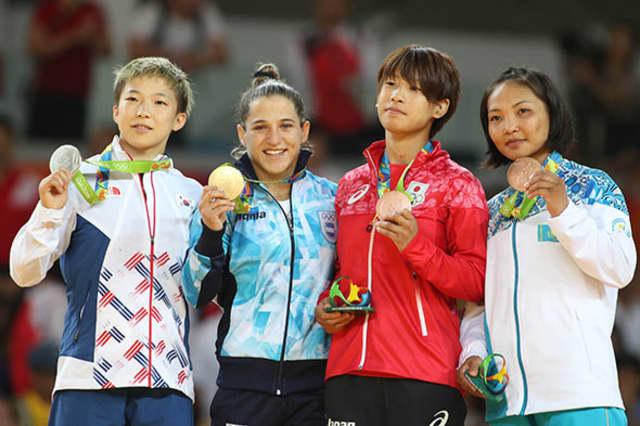 Three-time European champion Beslan MUDRANOV (RUS) gave his country a dream start at the Rio 2016 Olympic Games as he starred to keep the -60kg Olympic title in Russia. Four years ago it was Arsen GALSTYAN who won on day one in London and in Rio de Janeiro it was MUDRANOV who topped the podium after a blistering day of judo. Dusseldorf Grand Prix bronze medallist MUDRANOV defeated world champion Yeldos SMETOV (KAZ) in the -60kg final by a waza-ari in golden score which left IJF Hall of Famer and Russian head coach Ezio GAMBA in tears. After an additional 45 seconds, the Russian threw his Kazakh opponent with a sasae-tsurikomi-ashi for the gold medal-winning score. 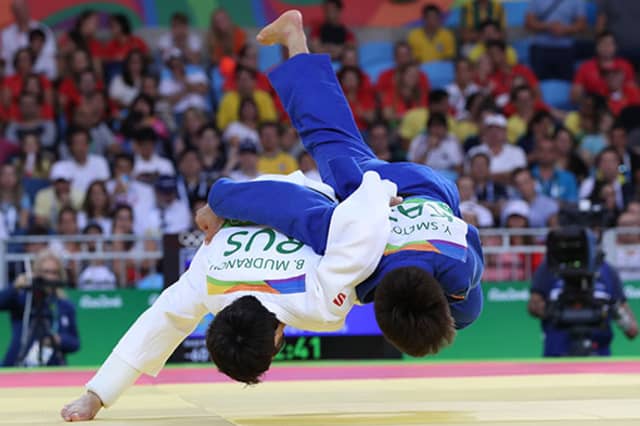 An ecstatic MUDRANOV, who was overwhelmed by a crowd of celebrating compatriots, said: “Right now I'm very happy, really, I don't understand what I'm feeling right now. Today I felt OK, so I can say I am at the peak of my career." 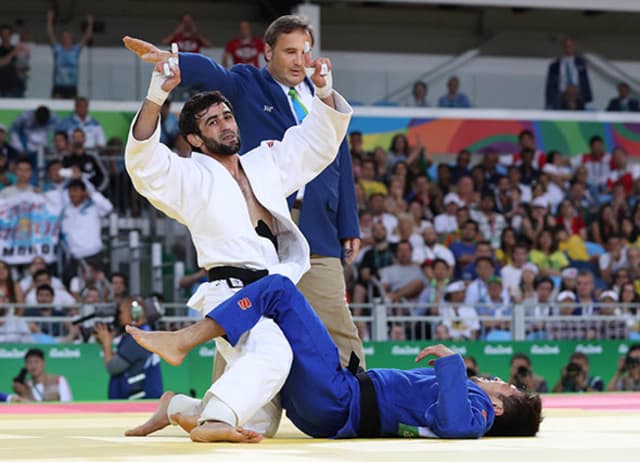 In the semi-finals MUDRANOV (RUS) defeated former European champion Amiran PAPINASHVILI (GEO) with a beautiful uchi-mata while in the second semi-final World Judo Masters winner Orkhan SAFAROV (AZE) fell to SMETOV (KAZ) in the last 15 seconds as the latter countered for a waza-ari score. 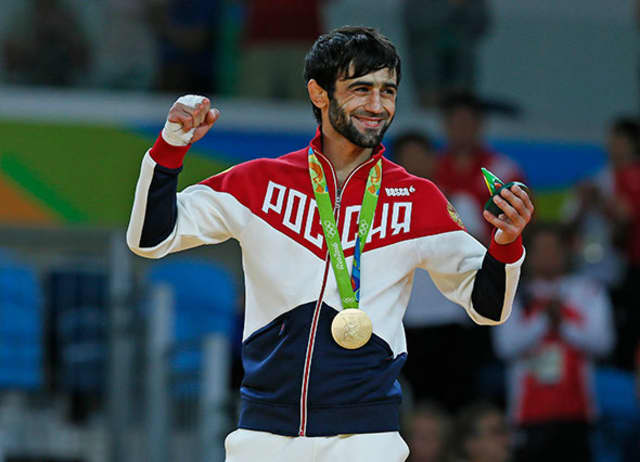 The first -60kg Olympic bronze medal contest saw SAFAROV up against Tokai University’s TAKATO Naohisa (JPN) who ended his country’s 16-year wait for a -60kg world title when he won gold in Rio de Janeiro in 2013. Japan hoped that TAKATO could become his country’s first -60kg Olympic champion since NOMURA in 2004 but while his dream day did not come to fruition, the opportunity to stand on the medal podium wearing the colours of Japan meant the world to the fan favourite. SAFAROV was penalised twice with shidos in a scoreless contest as TAKATO avoided any shidos due to his greater workrate and promptly tapped the Japanese flag on his judogi before receiving a pat on the back from NOMURA in the mixed zone.

An emotional TAKATO said: "The gold medal is the only one, in the future I plan to bring home the gold medal to my family and to honour my people."

The second -60kg Olympic bronze medal contest pitted PAPINASHVILI against Almaty Grand Prix bronze medallist Diyorbek UROZBOEV (UZB). The 22-year-old Uzbek had the day of his life which ended with a neat tomoe-nage earning him a yuko score and that proved enough for the final medal in the -60kg category. An elated UROZBOEV jumped with joy and pointed to a row of fans waving Uzbek flags before he ran into the mixed zone in excitement. 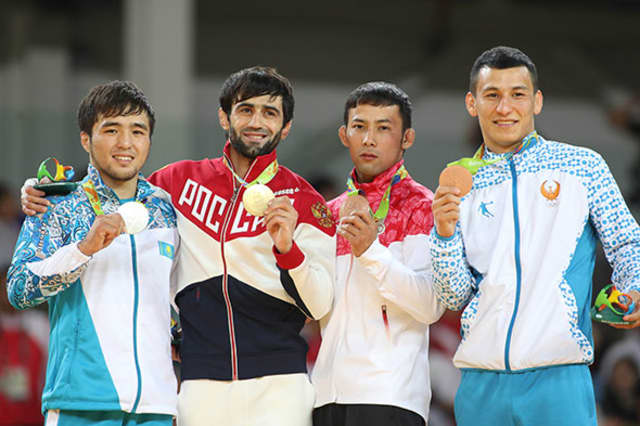