Written by Nicolas Messner on 26. Sep 2021
Photographs by Gabriela Sabau
Share
The first major event on the calendar after the success of the Tokyo 2020 Olympic Games, the Zagreb Grand Prix, has just ended. It was a very positive event, one which saw the advent of a new generation of athletes, some of whom will undoubtedly be in Paris in 2024, while others are already in the preparation phase for the Los Angeles Games in 2028.

While these global events may seem far away, in reality things are slightly different. From May next year, the new Olympic qualification period will begin and from then on all efforts will be focused on the world circuit for gaining those valuable points. In the meantime, the Zagreb Grand Prix was a perfect test, in many ways.

First of all and this is undoubtedly the most important for the athletes, while we are still in a pandemic period, judo is continuing in a good way. The safety and health of all is ensured, thanks to the health policy implemented by the IJF. Zagreb made it possible to reinforce this further.

On the other hand, despite the logical absence of many heroes of the Japanese summer, the judo offered by all the judoka present was of a very high level, which heralds an exciting season for fans of our sport.

Hats off to the team of local organisers, who, under the leadership of President Sanda Corak, delivered an impeccable grand prix. 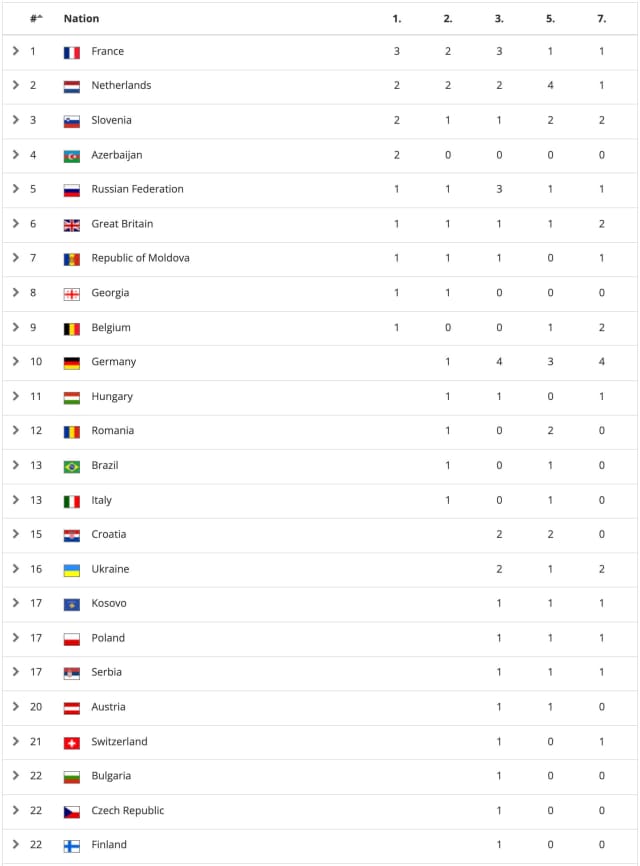 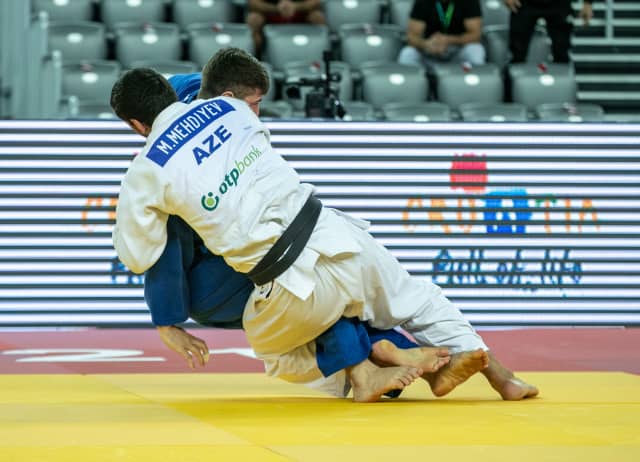 Being under the pressure of having two penalties against him, Mammadali MEHDIYEV nevertheless, was the first and last to score, with a precise ko-soto-gake for ippon, leaving no escape possible for MAISURADZE. This is the second gold medal of the event for Azerbaijan. 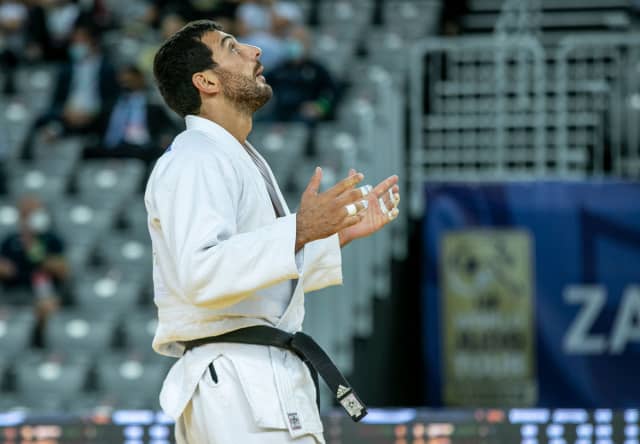 In the first bronze medal contest Wachid BORCHASHVILI (AUT), whose brother was Olympic bronze medallist this summer in Tokyo, faced Stanislav GUNCHENKO (UKR), who had no record at this level of competition, so far. A minute and 49 seconds of the golden score period were necessary for Wachid BORCHASHVILI to score ippon after a very close match that was only decided with penalties.

With four grand prix bronze medals to his name already, Jesper SMINK (NED) had the possibility to add one more, competing against KHALMURZAEV Khusen (RUS), silver medallist at the Tashkent Grand Prix in 2019 and twin brother of 2016 Olympic Champion Khassan KHALMURZAEV. The latter won the bronze medal after his opponent received a third shido, one second before the end of the match, for a false attack, a mistake that cost him that final step on to the podium. 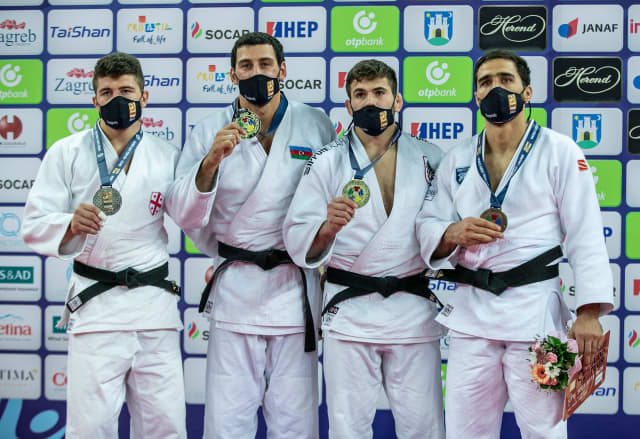 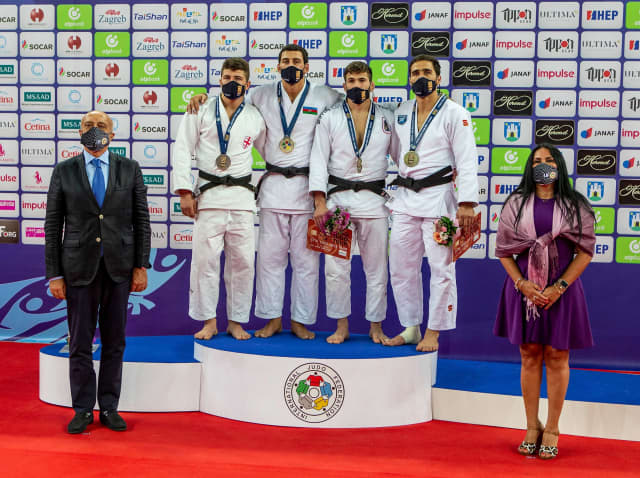 Medals, checks and flowers were presented by H.E. Mr Fakhraddin Gurbanov, Ambassador of the Republic of Azerbaijan in Croatia and Mrs Katiuska Santaella, Member of the International Judo Federation Education Commission, & President of the Judo Federation of Venenzuela

-78kg: A Smiley Victory for STEVENSON

Silver medallist in Tbilisi this year, Karen STEVENSON (NED), had a new chance to reach gold as she faced Patricija BROLIH (SLO) in the final, who so far had nothing better than a fifth place in a grand prix to her name. 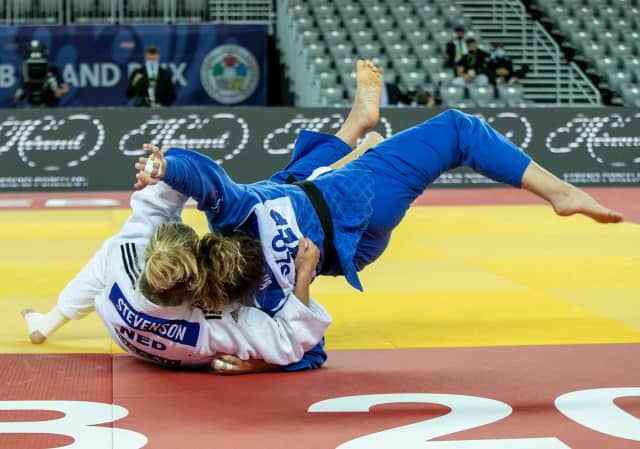 We have seen this combination several times during the day: sumi-gaeshi and ground work. After she stepped on to the tatami, totally relaxed and smiling, this was the tactic STEVENSON applied perfectly in the final, defeating Patricija BROLIH with ease to win gold.

Number 41 in the world, Sophie BERGER (BEL) and Teresa ZENKER (GER), ranked 50, were the contenders for the first bronze medal. It took more than three minutes for ZENKER to win with a waza-ari throw followed immediately by an immobilisation for ippon, but the German clearly dominated her opponent throughout the match. This is the first medal in a grand prix for the German competitor.

The 2019 junior world silver medallist Renee VAN HARSELAAR (NED) faced the winner of the 2021 Sarajevo European Open Emma REID (GBR), for the second bronze medal. After two minutes REID took the lead with a sumi-gaeshi for waza-ari and then went to work on the floor, freeing her leg and pinning VAN HARSELAAR for ippon to win her first medal at a grand prix. 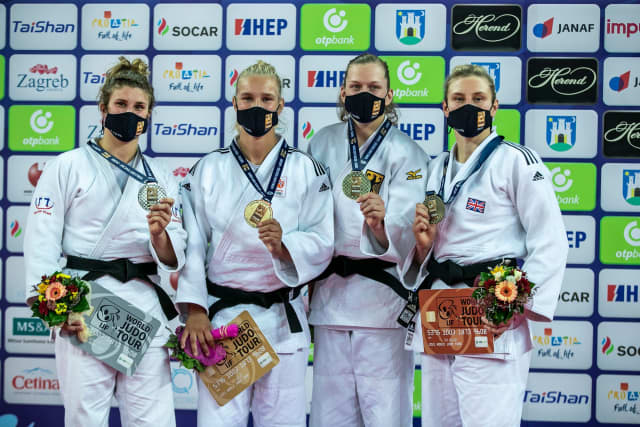 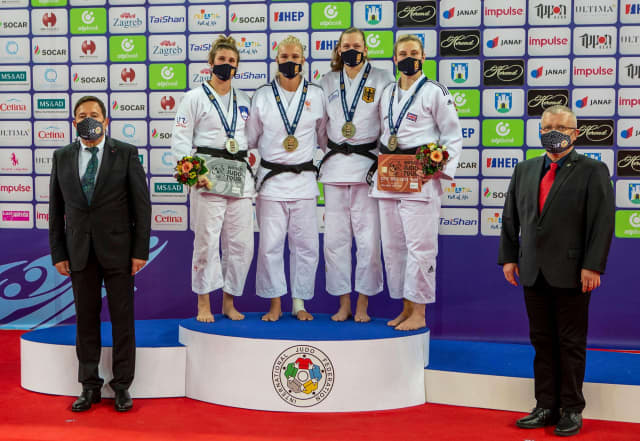 Arman ADAMIAN (RUS) produced his biggest effort in the semi-final against former world champion for Cuba Asley GONZALEZ, now competing under the Romanian flag. After a very close match, ADAMIAN had to wait until golden score to eventually notch up a waza-ari. In the final he was opposed to KURBJEWEIT GARCIA Dario (GER), who only had a fifth place in a grand prix to his name before the start of the Zagreb event. 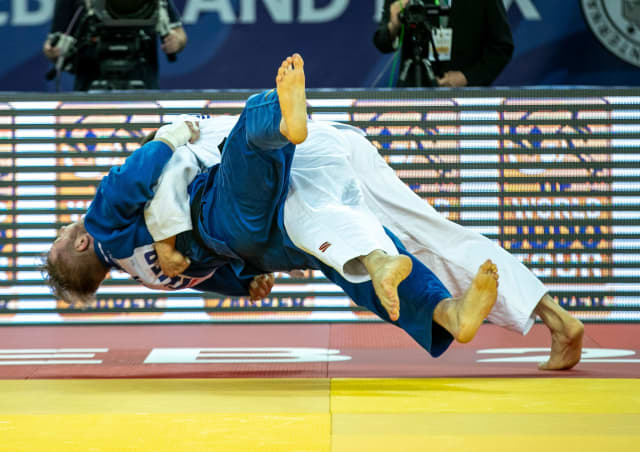 After only 17 seconds, ADAMIAN scored, registered first as ippon but lowered to waza-ari after the video refereeing confirmed that KURBJEWEIT GARCIA did not land on his back. The match looked a little more balanced then, at least until 44 seconds remained. ADAMIAN then counterattacked his opponent to score a second waza-ari that offered him the gold medal. 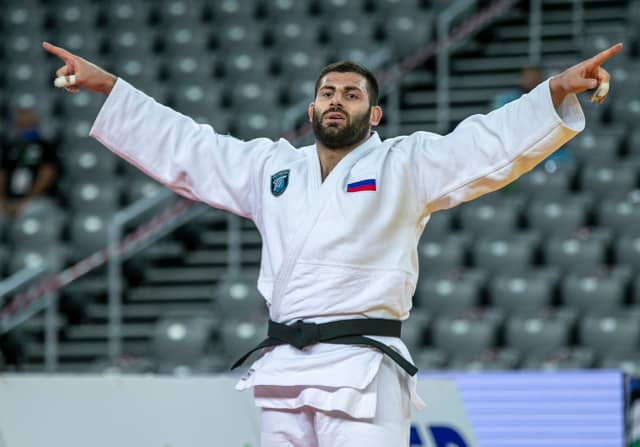 The host country had another chance to win a medal, with Marko KUMRIC (CRO) who faced Asley GONZALEZ (ROU) for a bronze. This was not an easy task but Marko KUMRIC, fully supported by a teammate present in the stands, delivered a great performance, scoring a waza-ari with sumi-gaeshi, probably the technique of the day and then keeping his advantage until the end. KUMRIC won the second medal for the home nation here in Zagreb. 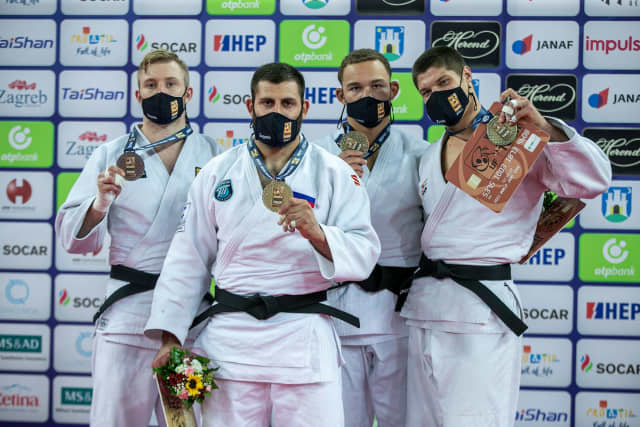 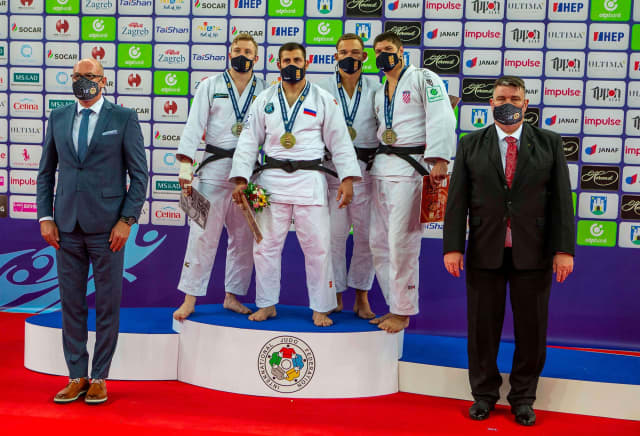 +78kg: An Easy Win for TOLOFUA of France

Julia TOLOFUA (FRA) is a member of the French women's heavy weight school. She entered the final against Mercedesz SZIGETVARI (HUN), second a week ago in Sarajevo on the occasion of the European Open. 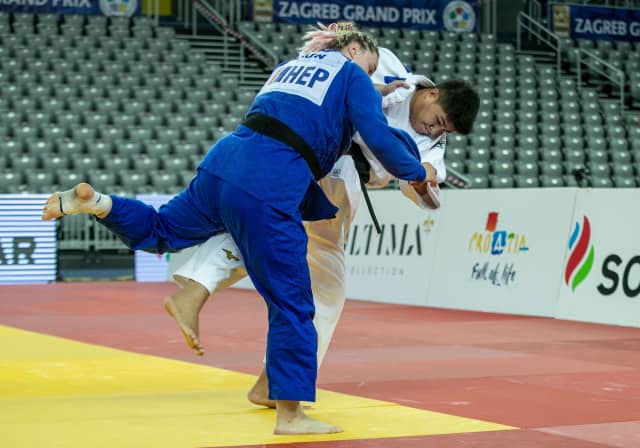 Julia TOLOFUA didn't really have to produce a big effort as she just had to let Mercedesz SZIGETVARI make mistakes and collect the benefits. After the Hungarian judoka was penalised three times, Julia TOLOFUA could enjoy the taste of gold.

Croatia qualified another athlete, Tina RADIC, for the final block. She faced Renee LUCHT of Germany to win a place on the podium. RADIC was dreaming of imitating her teammate Marko KUMRIC, but unfortunately she was defeated with an hold down, sending the medal to the German competitor.

The second Frenchwoman of the category, Laura FUSEAU qualified against Helena VUKOVIC (CRO) for a place on the podium. No-one seemed to be able to find the slightest solution to throw until deep into the golden score period when FUSEAU eventually applied a small o-uchi-gari to make her opponent react with a step back, leaving space for FUSEAU to launch a strong left handed o-soto-gari for ippon, destroying VUKOVIC's dream of a podium finish. 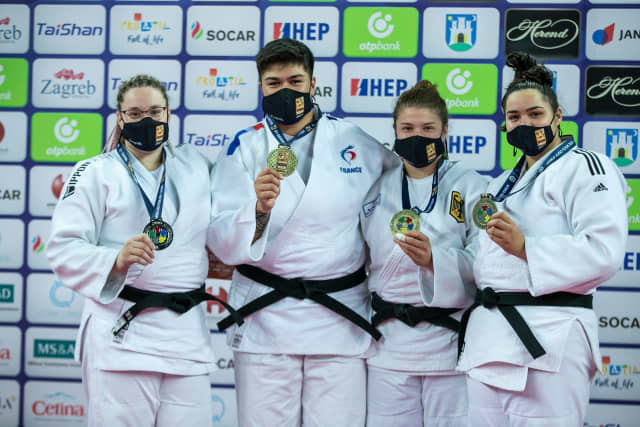 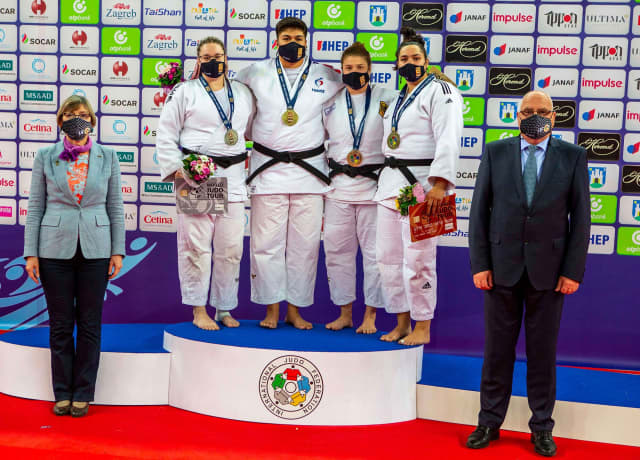 Medals, checks and flowers were presented by Dr Sanda Corak, Education Director of the International Judo Federation and and President of the Croatian Judo Federation and Mr Tomislav Druzak, State Secretary for Sport and Personal Representative of the Prime Minister of the Republic of Croatia

+100kg: Gold for SPIJKERS to Conclude the Weekend

The last final of the day and of the competition saw Jur SPIJKERS of The Netherlands and Vladut SIMIONESCU (ROU) compete for gold. They were the top seeded competitors of the category and won all their matches by ippon. 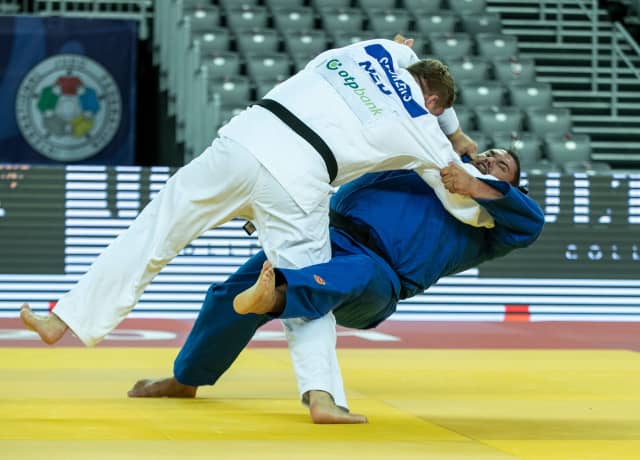 Always on the move, Jur SPIJKERS was harassing SIMIONESCU with all kinds of little techniques that were meant to prepare stronger attacks, one of which eventually came: a massive o-uchi-gari that flattened SIMIONESCU for ippon. Gold for SPIJKERS!

In the first bronze medal contest Yevheniy BALYEVSKYY (UKR) met Vito DRAGIC (SLO). After 2'51 of golden score and two penalties distributed on each side of the scoreboard, Yevheniy BALYEVSKYY finally scored ippon with an opportunist shime-waza technique.

Daniel ZORN (GER) and Martti PUUMALAINEN (FIN) were the last athletes offered a chance to win a medal at the 2021 edition of the Zagreb Grand Prix. PUUMALAINEN didn't let the chance get away from him. While he was continually attacking and taking risks, ZORN was penalised three times and thus disqualified, offering a well deserved medal to the Finnish competitor. 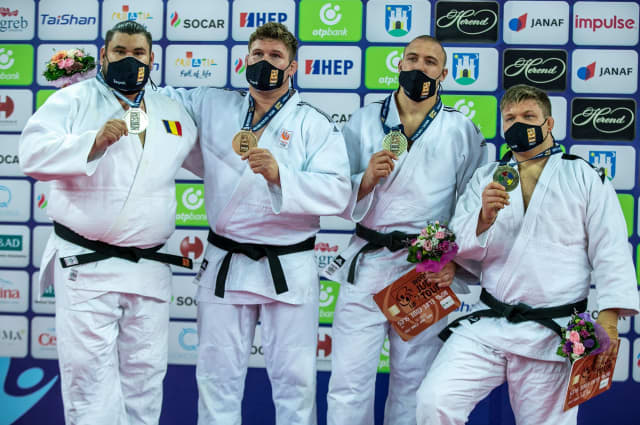 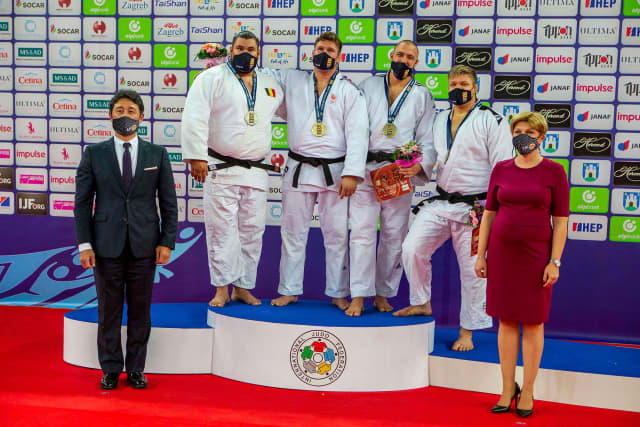