Written by Pedro Lasuen on 29. Jan 2022
Photographs by Gabriela Sabau
Share
On the first day Netherlands and Croatia caressed the gold and won silver. On the second, both confirmed that they have started the year with a positive dynamic and we are not talking about Covid. Spain stumbled on the first day and corrected their shot on the second. Portugal premiered with splendour, but the power cut out on Saturday. From Hungary came a missing person, while Finland showed that without snow you can also live and Matthias Casse finally broke his particular curse.

The Dutch judoka Joanne Van Lieshout is 19 years old and when she smiles she has the face of a kind and responsible girl, a good student whom any couple would trust to take care of their children. On the tatami she only smiles when she wins and lately she often does. She won the Junior World Championships in 2021 and opens 2022 with a final in the first tournament of the year.

Iva Oberan is Croatian, three years older, just a little more experience in the senior world, but with the same ambition. She is not world champion, not at the moment, but she already has continental medals. Each reached the final, ready to get fully into the world of the elderly!

Van Lieshout withstood two onslaughts from her rival, measured the time and launched a fast ko-uchi-gari. It’s a first gold on the World Judo Tour, so she is already a senior! 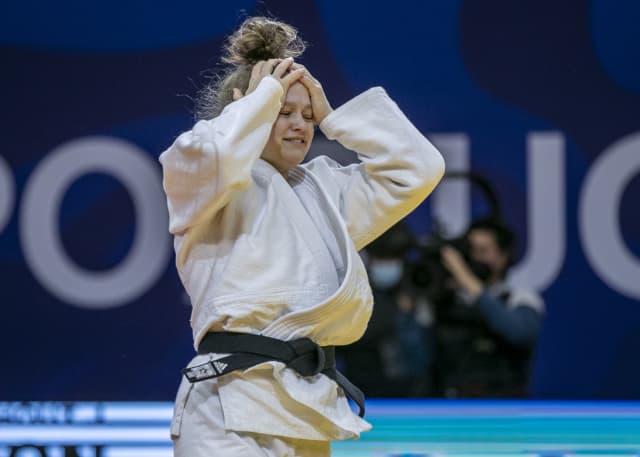 The first bronze medal went to the Czech Renata Zachova, who was able to stop another young promise from the Croatian school, Katarina Kristo.   The Spanish athlete, Cristina Cabaña Pérez, was going like a rocket towards the final when she made a mistake in the semi-final and was left with honey on her lips. In the fight for bronze against the Romanian Florentina Ivanescu, the Spaniard made the same mistake, losing concentration after scoring waza-ari. Cabaña Pérez conceded a waza-ari too and then a second one. She was left without gold and without bronze because Ivanescu knew how to take advantage of her moment. 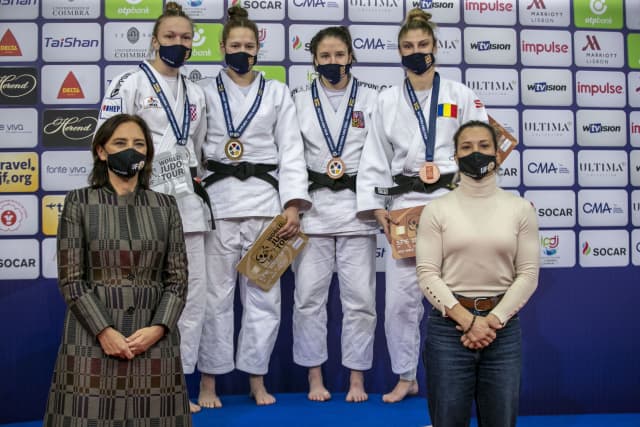 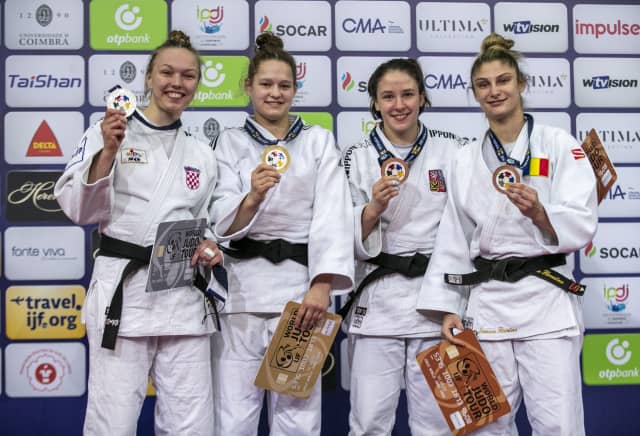 Men's -73kg: Not The Usual Suspects

There is nothing unusual about seeing an Uzbek in a judo final. To see a Spanish judoka in a final is also less and less unusual. Another thing is the names. Murodjon Yuldoshev is more used to seventh place in tournaments than the podium. In Lisbon, the Uzbek said something like “enough is enough, now you are going to see what you are going to see.” Salvador Cases Roca is a rather peculiar young Spaniard because he does not have an outstanding technique like the great champions. What he does have is good groundwork, a strong hip and a solid arm. In Lisbon he also had what is called a good day and reached the final after a journey based on ippons. 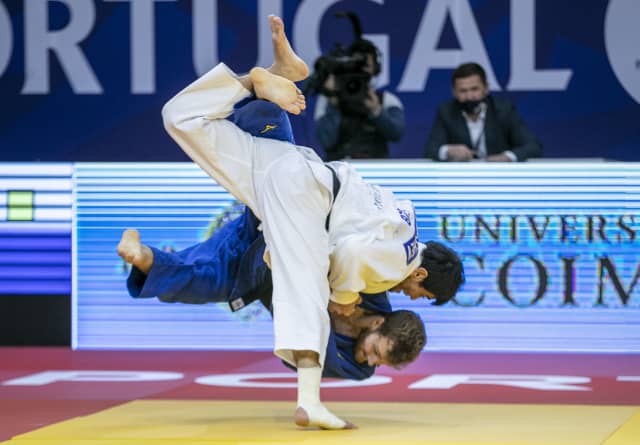 In any case, it was an unprecedented final for both on the World Judo Tour and nobody wanted to make a prediction. Those who bet on Yuldoshev were right. The Uzbek won thanks to a powerful uchi-mata. 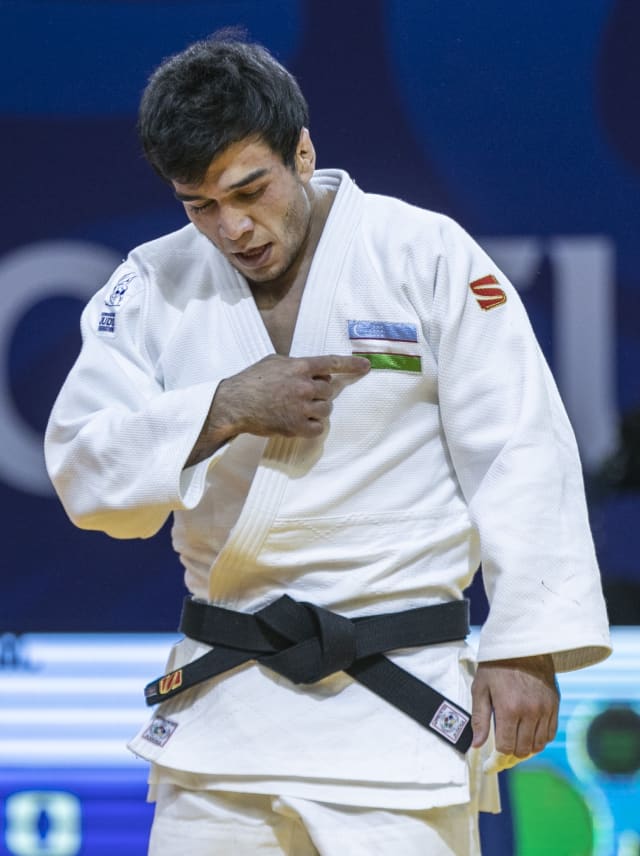 Mongolia has long been building a promising future, with a large and diverse quarry. The results are excellent and facing one from that team is a guarantee of difficulty. Sod-Erdene fought for the bronze against another judo promise, but this one from France: Joan-Benjamin Gaba. Both young, fast and dynamic, it was a combat with high revolutions, accelerated, almost express. The Mongolian took the lead with waza-ari. The response was spectacular with a perfect harai-makikomi and bronze for the Frenchman. There was another Mongolian waiting, a candidate for the second bronze of the day. His name is Ankhzaya Lavjargal. There was also an equally determined Moldovan, Petru Pelivan. Lavjargal won thanks to a morote-seoi-nage, thirty seconds from the end. 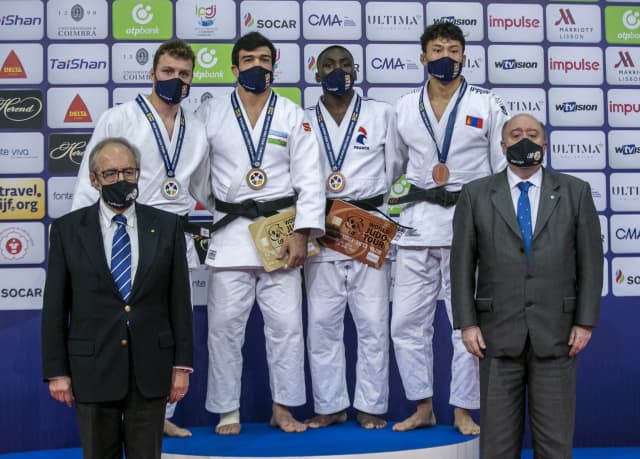 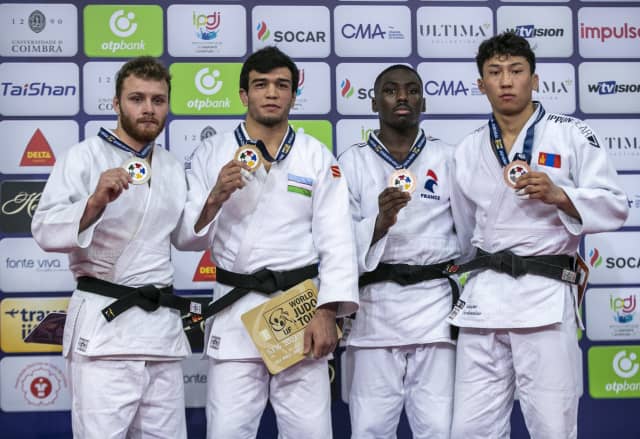 It is seen that on Saturday at the Grand Prix of Portugal there was no need to be a favourite. The Brazilian Maria Portela and the Spanish Ai Tsunoda were the announced scarecrows, with relatively affordable draws, being seeded has to be for something, maybe a golden future. That was the theory! In practice, Portela crossed paths with the Dutch Jorien Visser. We have already said that the Netherlands has far surpassed the excesses of the end of the year. Visser was on her way to the final when she collided with Szabina Gercksak. The last time we saw the Hungarian on a World Judo Tour podium, Ronaldinho and John Terry were still active. Little or nothing is known about her. In Lisbon she reached the last step with a powerful, offensive and entertaining judo for the public. For their part, it is clear that Croatia is not limited to world champion Barbara Matic. There are women of quality and we have all seen it in Portugal. To face Gercksak, Croatia sent Lara Cvjetko, 20 years old, runner-up in the Junior Worlds and a silver in a Grand Slam that already hangs on the wall of her room. So the revenant against a representative of the rising Croatian team and as it seems that the wind is blowing in favour of Croatia, the gold returned to Zagreb after a frankly boring final, decided by an accumulation of shidos. 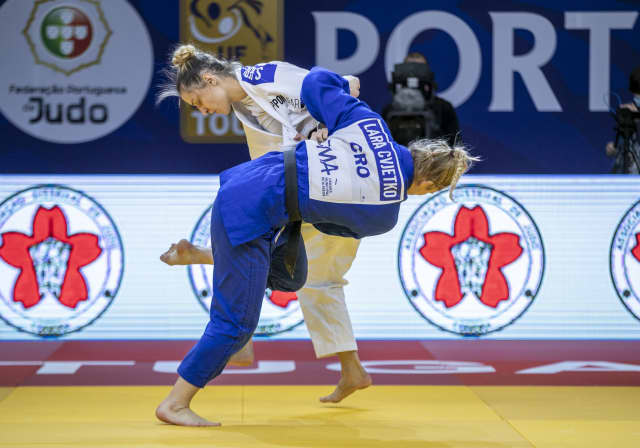 As for the bronze, Portela and Tsunoda brought out the pride that great athletes treasure when things go wrong. They did not want to leave empty-handed and with bad feelings in their bodies. The Brazilian defeated the Korean Heeju Han and the Spanish managed her side. Gold and bronze are not the same but a medal is a medal. 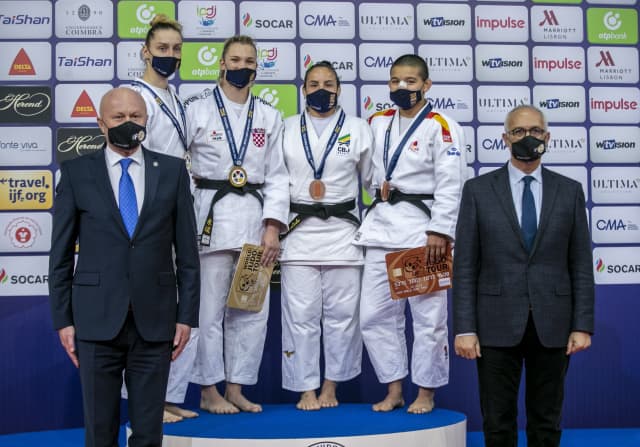 Medals and cheques were presented by Col. Stefan Marginean, Head of the International Judo Federation Military Commission and Mr Carlos Andrade, President of the General Assembly of the Portuguese Judo Federation 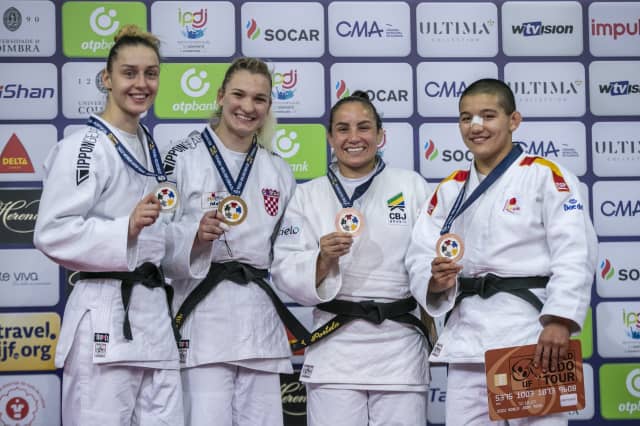 Belgian Matthias Casse is adding to his service record at a rapid rate: world champion, Olympic bronze, world number one! It can be said that life smiles at him. However, there was a blemish on his resume; Matthias is not good with the Japanese and lost his last three fights against them. In Lisbon came the fifth, Yuhei Oino, who is not Nagase, but the Japanese is always the Japanese and it should not be taken lightly. Casse won like champions do, with an authoritative ippon, something like a message of the type, "I'm the boss, in case anyone hadn't heard yet." It was like taking off your heels or loosening your tie after a full day at the office. That's why he reached the final focused but with less weight on his shoulders. The nerves were on the other side of the tatami and suffered by Oskari Makinen, a 22-year-old Finn who surprised everyone in Lisbon with an unlimited will and exceptional form. As he is ranked 115th on the World Ranking List, he had nothing to lose against the category boss and those situations are usually the most dangerous for the big fish. 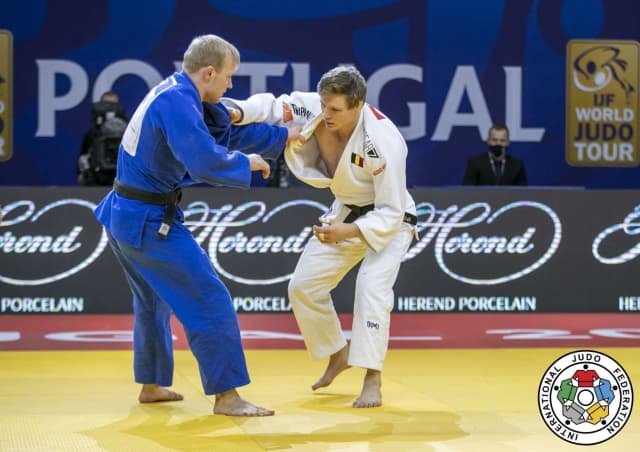 Sure enough, Makinen came out without fear, impassive, as if it were a training session. The problem was that Casse didn't find his world championship title in a cereal box. He showed it off with class with eri-seoi-nage but what the Belgian did is more than just win gold. Until now he had never won a grand prix . As of today he is one of the few judoka who has won all the possible titles on the World Judo Tour, that is, grand prix, grand slam, masters and world championships. Casse is building an impressive calling card and as if that wasn't enough, he looks the Japanese in the eye again. 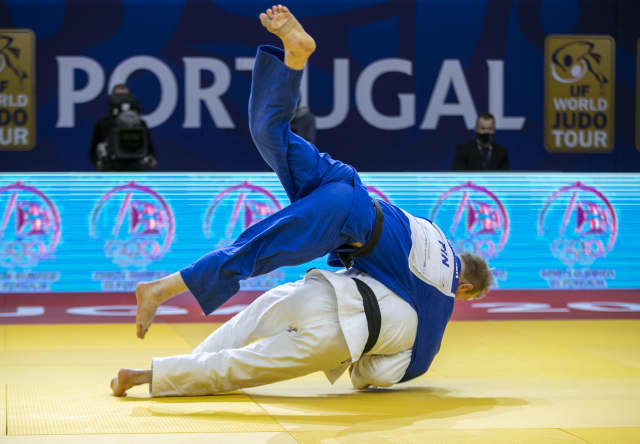 Korea is being very active in Portugal, France is too. The first bronze was settled between Jonghoon Kim and Nicolas Chilard. The Korean took the lead with waza-ari and then went on to play the clock with some good work in ne-waza. Tick-tock tick-tock, the French never found a way because the Korean had closed it.

To finish, a duel between two great judo nations: Brazil and Japan. Guilherme Schmidt versus Yuhei Oino fought but it was not a brilliant confrontation. It ended with the elimination of the Brazilian because Oino was better and more clever but it was important for Japan because the country is not shining in Portugal with its young athletes and that is a breaking news. 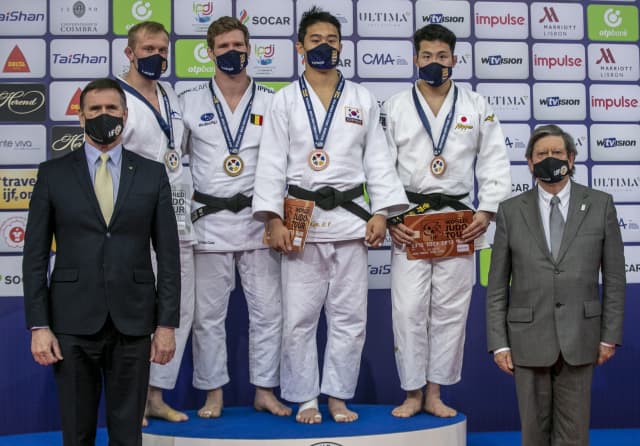 Medals and cheques were presented by Mr Vladimir Barta, Head Sport Director of the International Judo Federation and Mr Antonio Martins Borrego, President of the Judicial Council at the Portuguese Judo Federation 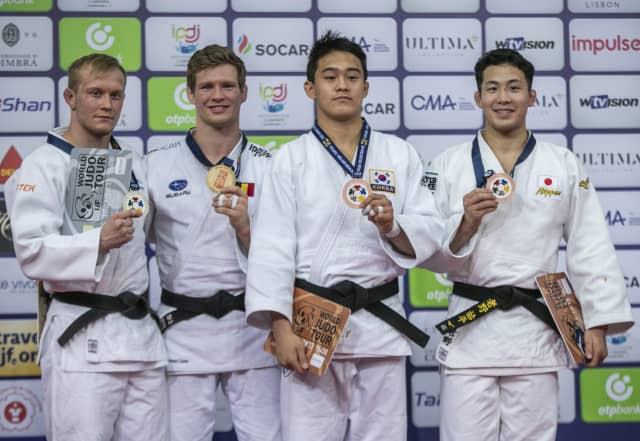 Only the third day remains. XXL sizes arrive, those that need more space on the plane and make a lot of noise when they fall. Get ready, this smells like we're going to be deafened!