Written by Jo Crowley on 29. Mar 2022
Share
The Erasmus SchoolJudo.EU project has been through many phases already, with bids, planning, cementing of the pedagogy and methodology, information-gathering and much more. Now the 3 pilot countries are ready to deliver their first classes and kick-off the project in ernest. The whole programme is designed to be rolled out in Italy, Slovenia and Hungary first but with future plans to produce a transferable set of guidelines which could be used in any school anywhere the world. The idea is to enable coaches to become Entertrainers, equipped to deliver integrated judo programmes, working with schools and bringing judo values into the classroom as well as the dojo.

Julianna Kiraly and Margareta Bacsu are key members of the team in Hungary, driving the SchoolJudo.EU project, not always in easy circumstances. Both studied Sports Management at the Hungarian University of Physical Education. Margareta has been involved in judo since 1999, as a competitor, referee and coach, while Julianna has worked and volunteered in a variety of sports and roles for many years. 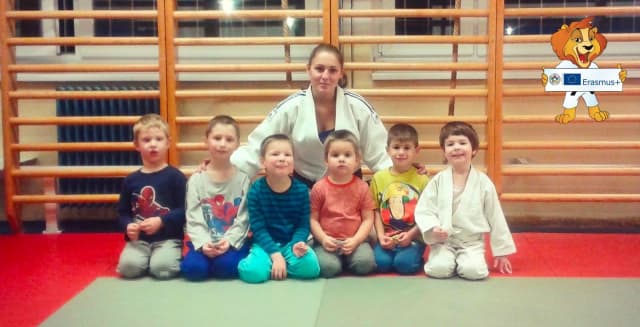 Margareta with young judoka in a school setting

One of our coaches, Rego Selmeczi, was in the Netherlands for the Erasmus transnational meeting a few weeks ago and it was really useful and informative. Now it’s our job to help him and our other coach, Zoltan, to put all their experience, knowledge and training into practice.

In Hungary it’s hard to get funding but with a lot of hard work we got it! There’s not a lot of budget but we plan to use it all there is to really push the limits of development. For example, we want to translate the guidelines into Hungarian and even when the project is finished we want to continue.

It’s hard to get parents to pay for this provision. Combat sports are already required in Hungarian schools for a fixed amount of time. Many choose wrestling or other sports. Contracts have to be signed by the school, teacher, Federation and school district and so it’s beyond just the school to confirm things. After school clubs are complicated whereas normal clubs are easy to join.

Zoltan, one of our Entertrainers, has two schools in his local area and because they had existing judo provision it made the process much easier. Rego was also in one school already and so that was perfect too. Both had contracts already in place to teach judo so the choice to teach along the SchoolJudo guidelines, using the values and integrating with class teachers, is up to the teacher and the Entertrainer, without the need to request permissions beyond that. 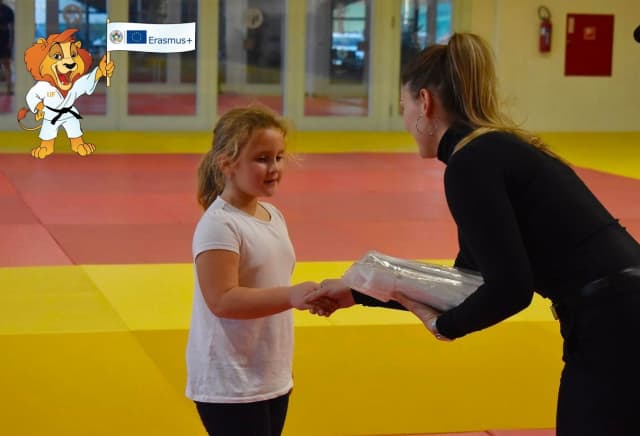 Margareta presenting a judogi on behalf of the Hungarian Judo Association, during a school judo session

We would like to send the book to all judo teachers working in schools, even if they are not part of this project at the moment, to help improve the general teaching of judo at school level. This is our aim, not to use this way for one year or just a school term, but continuously.

Despite delays for Covid-related reasons and other local, organisational issues, the project continues to move forward with the hard work of the Hungarian Judo Association through Julianna, Margareta and the two Entertrainers, Zoltan and Rego. We look forward to bringing you the feedback from the first lessons soon.