Written by Marina Mayorova, Esther Stam on 24. Sep 2019
Share
Since a few years, Uzbekistan has been investing in IBSA judo. As a result, they topped the Medal Podium at the last Paralympic Games in Rio de Janeiro. The last two days they proved that it didn’t stop there. The Uzbek team won four of the thirteen categories and topped the Medal Podium once more. 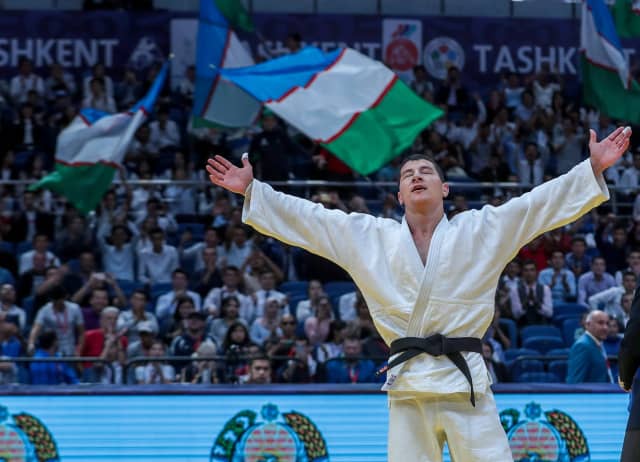 Next to the Uzbek team being in great shape, we saw seven other nations winning a gold medal. It shows that many countries are working on an IBSA judo programme. We spoke to IBSA Sports Director Janos TARDOS about these developments. “You can tell that the level of judo is increasing all the time. Let me give you a clear example of that: In the past you could see many situations where one judoka attacked and there was either a score or a mate. Now you can see many combinations and counter attacks. It makes it more exciting, much more exciting to watch and you could tell here in Tashkent that the crowd was appreciating that.” 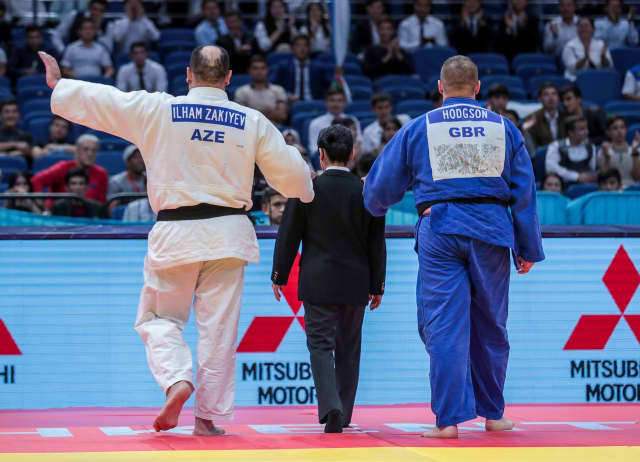 Tardos continues: “I am proud that the collaboration between IBSA and IJF is becoming stronger. It is not a coincidence that the two grand prix this year are combined with the IJF World Judo Tour. The IBSA staff is quite small and thanks to the collaboration we have a lot more recourses. Another benefit is that the staff of the local federation already knows what to do. At previous tournaments, we sometimes had to work with staff that was untrained for the event. Now, the staff already had the experience of the IJF Grand Prix.” 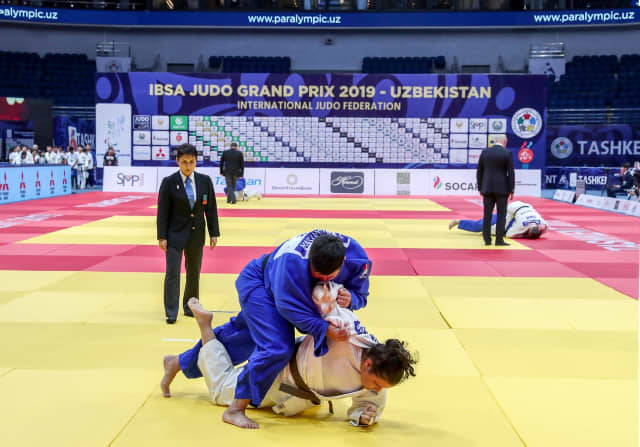 IBSA refereeing director Angelika WILHELM agrees with Janos and is pleased with the Tashkent Grand Prix: “I am very satisfied about this tournament. The level of judo has been very good here. The IJF staff helped us enormously with the organization and you can see that the athletes benefit from that. To add to that, the local organizing committee here has been amazing and I think everything together made it a great tournament.” 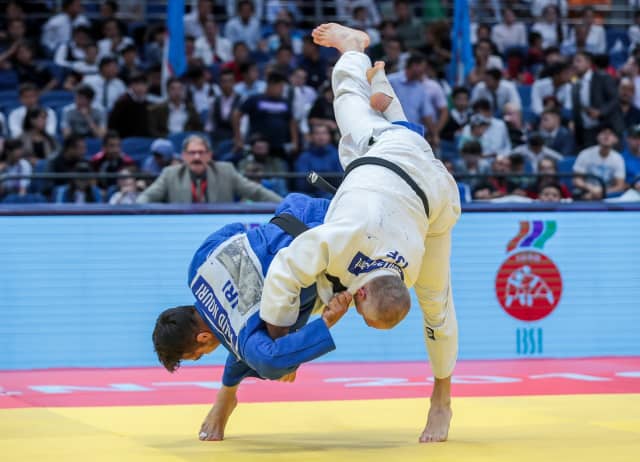 It was the day of Davurkhon KAROMATOV (UZB) today, beating not only top favorite Huseyn RAHIMLI (AZE) with a flashy ippon, but also the experienced Dmytro SOLOVEY (UKR) in what was presumable the most exciting final of today. After Karomatov scored a first waza-ari with a soto maki komi, Solovey came back with a counter attack to even up the score. It was Karomatov that proved to be the most creative, coming up with a beautiful ko uchi maki komi to secure the third Uzbek gold. 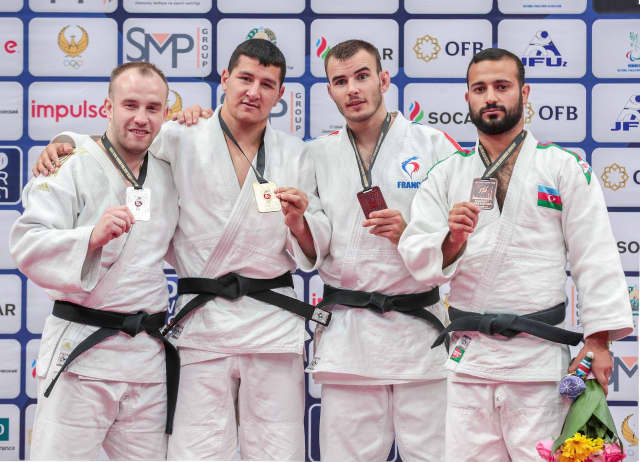 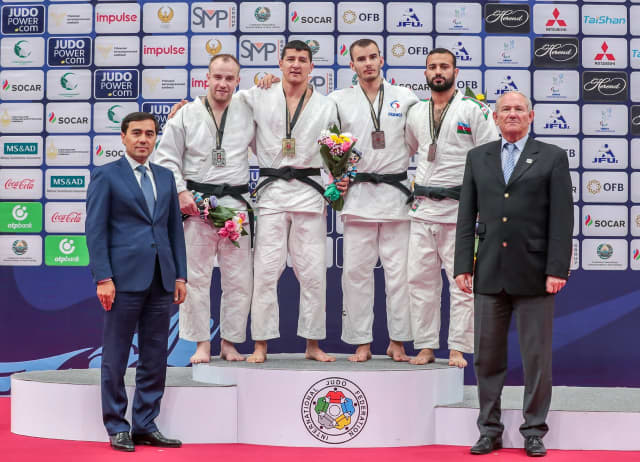 With the absence of the complete world podium, the field in the -63kg category was completely open. It was Nafisa SHERIPBOEVA of Uzbekistan who took the occasion to show herself once again. After winning gold at the Baku Grand Prix earlier this year, she collected a second gold by overpowering Khanim HUSEYNOVA of Azerbaijan. European Champion Huseynova tried to counter the strong attacks of Sheripboeva, but ending up on her back. 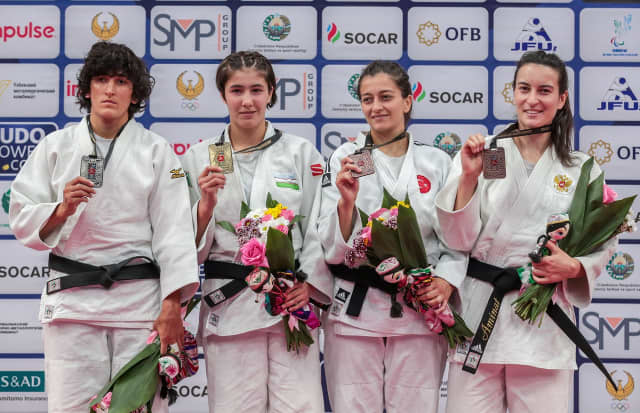 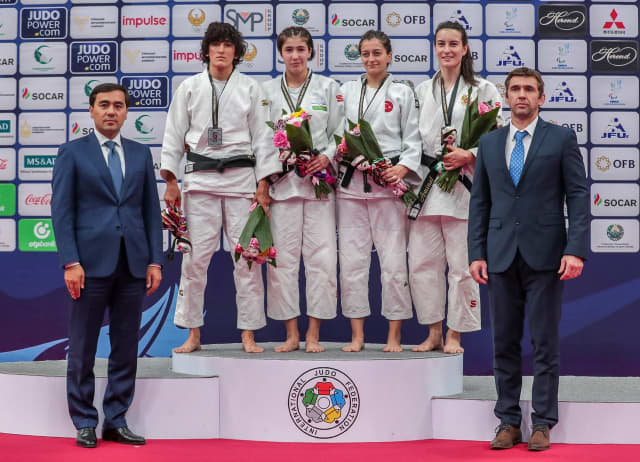 In the -90kg category Oleksandr NAZARENKO was the man to beat today, being the current World and European Champion. This was done by newcomer Lasha KIZILASHVILI of Georgia, in a tough battle in the semi-final. Kizilashvili showed a lot of spirit with a high rate of attacks, putting Nazarenko on three shidos. In the final he put Vahid NOURI of Iran on two shidos with the same strategy. But the work rate took its toll and after Kizilashvili ran out of energy, Nouri threw the Georgian with a beautiful left uchi mata to grab the gold. * 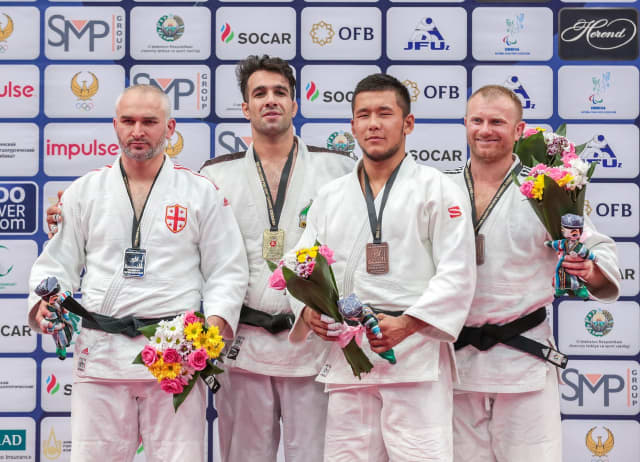 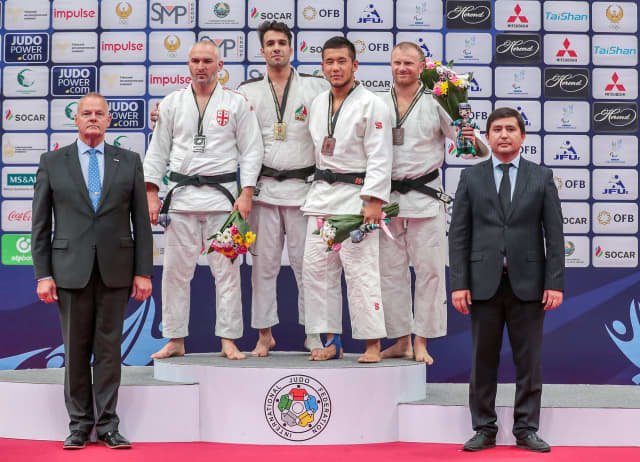 With the absence of Lenia RUVALCABA of Mexico, nobody could bring a real threat to Alana MARTINS of Brazil. In the final she overpowered Valina ALIBOEVA of Uzbekistan, putting her on three shidos to add another gold to her collection. 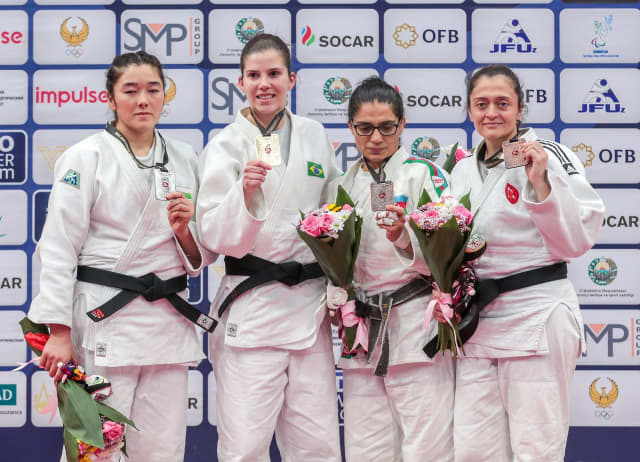 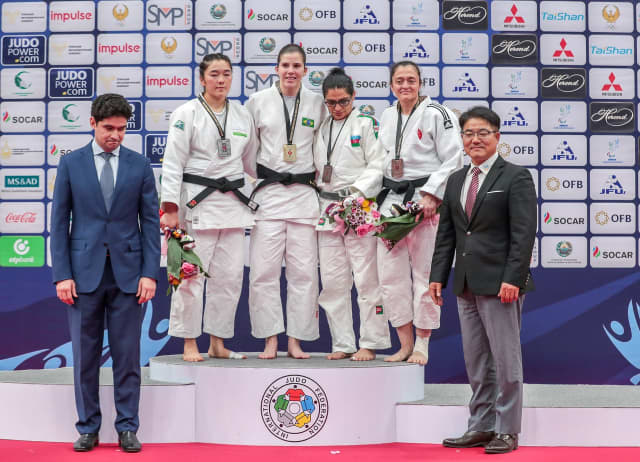 The -100kg category was also stripped of his favorites, with both Zviad GOGOTCHURI of Georgia and Abdula KURAMAGOMEDOV of Russia missing. It was Kanan ABDULLAKHANLI of Azerbaijan who gratefully made use of the occasion by beating Christopher SKELLEY of Great Britain in the final with a soto maki komi. 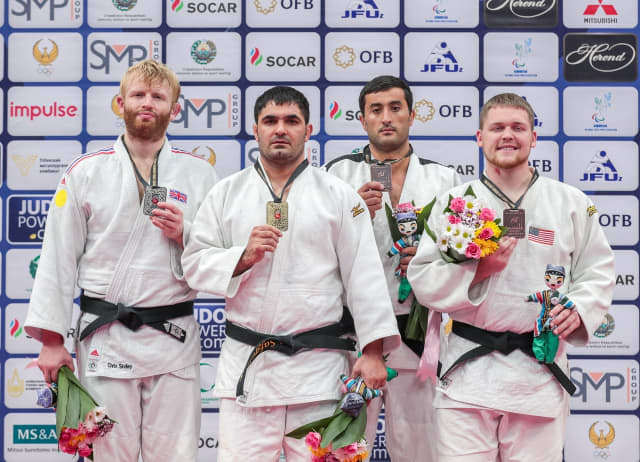 SKELLEY, Christopher B2 (GBR) vs. ABDULLAKHANLI, Kanan B3 (AZE)

SHEVCHENKO, Anatolii B1 (RUS) vs. GOODRICH, Benjamin B3 (USA) 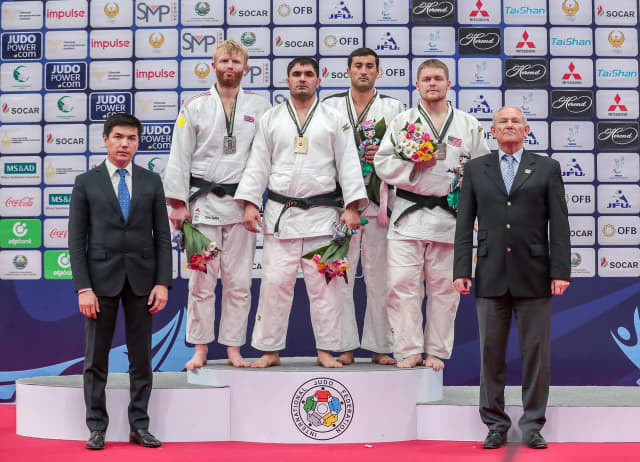 Carolina Costa is on fire this year, already winning the IBSA Judo Grand Prix of Baku and the European Championships in Genoa earlier this year. She looked untouchable today, beating all her opponents with ippon. In the final she showed a strong combination of a uchi mata maki komi and osaekomi waza. 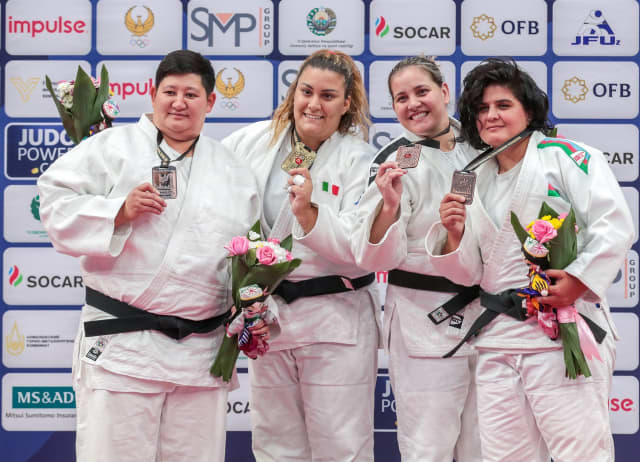 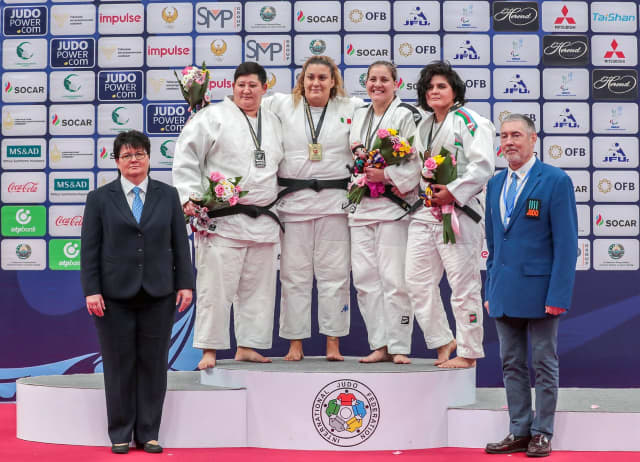 In the final category it was world champion Mohammadreza KHEIROLLAHZADEH of Iran that took home the gold. With a clever turnover, he held down Shirin SHARIPOV of Uzbekistan for twenty seconds to score the final ippon of today. * 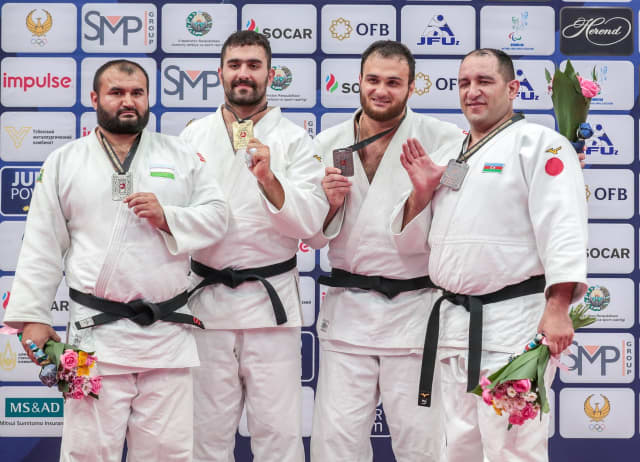 KHEIROLLAHZADEH, Mohammadreza B2 (IRI) vs. SHARIPOV, Shirin B3 (UZB) 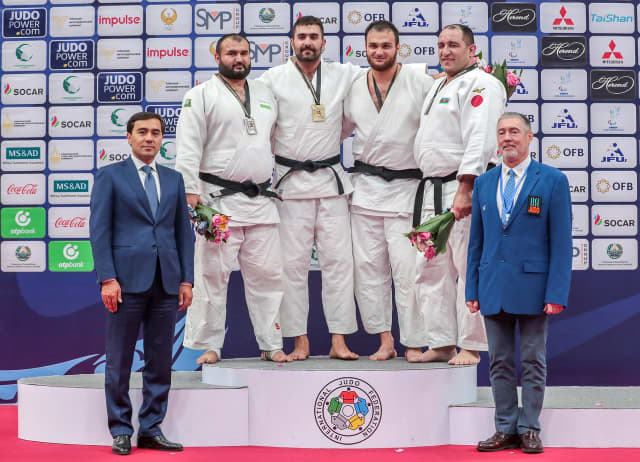 * The IBSA Grand Prix was held under the leadership of IBSA Judo, with the support of the IJF for the technical aspects of the competition, therefor the suspension of Iran Judo Federation announced last week, didn’t affect the participation of athletes from Iran.

Outside the Mat
The Trumpet

Great Day for Uzbekistan
The 2-second Man and Co.