Written by Jo Crowley on 28. Nov 2021
Photographs by Gabriela Sabau, Marina Mayorova
Share
There are athletes we can recognise simply from a movement, from a style, those who strike us because there is a marked difference between them and the rest. What they achieve or have achieved, is sometimes not a true reflection of their ability but in the case of Denis Vieru of Moldova, it is likely his end-of-career CV will be an impressive read, deserving of big rewards for his extraordinary attention to detail.

Among judo experts Vieru’s name pops up in conversation time and time again, as a stand-out stylist, a judoka whose repeated delivery of smooth technique and fluid travel across the tatami impresses, imprinting an impression that is as graceful as it is skilful on the memories of all who watch. 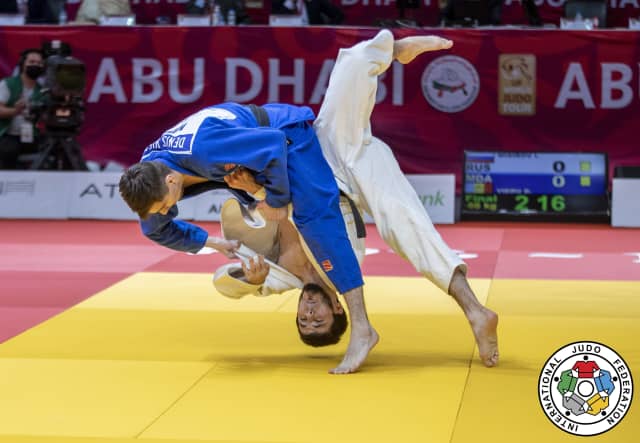 At 25 years old and with a world medal and 9 World Judo Tour medals in tow, including a gold at the closing grand slam of the 2021 season in Abu Dhabi, his career to date is comparable with others on the circuit but Vieru is different.

“When judo chose me or I chose judo, at 7 years old, I was straight away aiming for beautiful techniques but with time I realised that’s not enough, especially on the World Judo Tour. I needed power and physical improvement and so with that combination I can find what my judo really is.

I always followed 3 judoka, since childhood: Choi Min-Ho (KOR), Rishod Sobirov (UZB) and Beslan Mudranov. I didn’t follow them because they had the best results or the most medals; in fact I was watching them before the Olympic medals came. I loved the way they moved and how they produced the right feeling on the mat.

My most memorable contest to date was against Sobirov, my idol, in 2015 and I remember he hadn’t had such a great year. We met in Budapest in the early rounds of the grand prix. I was leading the fight but then lost. It wasn’t such a great fight but it was with one of my heroes. I regret not being able to fight him again after that, to be able to even the scoreline and beat my idol.”

Countless hours are spent perfecting technique, often one specific tokui-waza, not just for Denis but for all judoka and at all levels but he likes to be different!

I’m always trying to be unexpected and make sure my partner can’t see what is happening. In Abu Dhabi I made a beautiful seoi-nage against my teammate, unfortunately, a technique I was happy with and in Baku I used the same seoi-nage but in both situations it was unexpected and the techniques were not identical." 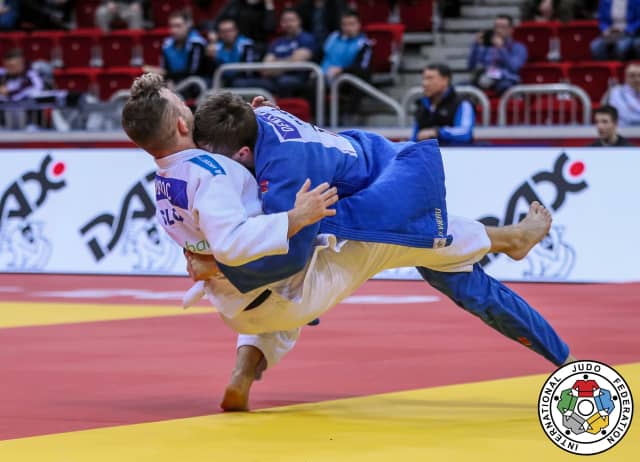 "It’s important to have the ideal fight, starting from the grip and the choice of technique and even in golden score to see who can win tactically.

So we could guess that Vieru’s goals, like those of most elite judoka, centre around an Olympic medal or a track record at world championships but as noted already, he likes to be different!

“I have been doing judo from the age of 7 and am still enjoying it so much that it is not like going to work. I must continue to enjoy it as that fuel my performances and feeds my goals.

My most important aim is to make my parents happy. Because of judo I can now provide some things for them and in the future I want to be able to sustain my own family. These things motivate me in general, although I realise that those thoughts can make me perform less well as they can bring pressure and so on fight days I just try to enjoy judo. It’s necessary to be a bit cold, like an animal, so I can concentrate and find the route to the win.” 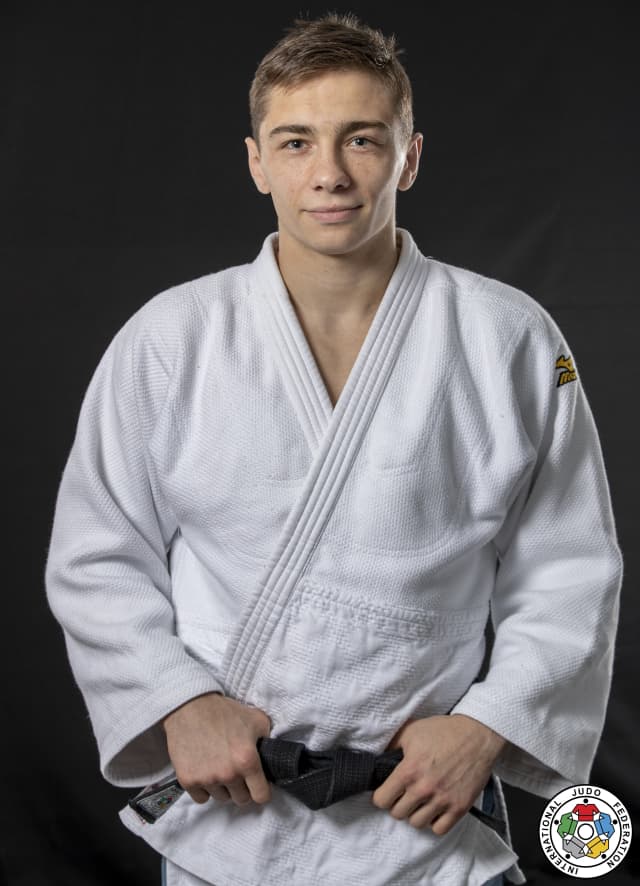 To know your life is bigger than just today, brings some confidence. Denis is always planning for his future, for his parents’ retirement, for further education, for a family of his own. It’s not just about now and finding the balance to be able to focus fully on today, to give of his best, but also have an eye on what is next, is a challenging task. Vieru is doing it well.

“I was once told that you have to make your plans and always aim at them. There are different kinds of plans for faster achievements or longer term hard work. I have big plans to be the NOC President for Moldova and build connections and friendships. Maybe it is possible that in the future I can be IJF President and I can then look back and know how hard I worked to get there. Yes it may sound like a fairytale but you must always work towards your ideal future and then be lucky too but without hard work you cannot possibly be lucky. The harder we work, the luckier we get!”

That work ethic is applied not only on the World Judo Tour, overspilling into his time away from the elite end of things. He coaches on the weekends he’s not travelling, like a hobby but actually holds a Bachelors degree in coaching, a Masters in fitness and another Masters in marketing and management for sport and he is busy planning when it will be a good time to begin working on his doctorate, probably after the Paris Games.

Vieru is open and generous when talking about those around him who facilitate his very full life and judo career, “To have the right people next to you, who will love you and who love what you do, is so important; people who will always support you and your goals. It’s essential to have a positive atmosphere around you no matter the results. I really have that with my family and my coaches.

It’s important to have different coaches throughout your career as from each one you will learn something. I have had 6 coaches, including my current national team coach. Each one has brought something necessary and important to my judo.” 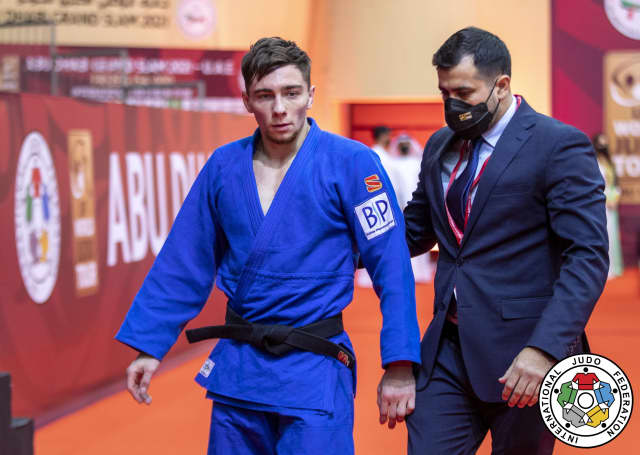 In Abu Dhabi everything came together as planned and the gold came Vieru’s way. He had some ideal moments in his contests, just the way he works for them and he had the right atmosphere around him, with good support from home.

“It was important to finish the year beautifully. Zagreb gold, Paris 5th, Baku silver and then first here too. I didn’t want to juggle with the athletes, no playing here, just going for the win. I was very concentrated; this one was important.”

The world medal is in the bag but the Olympic medal has, so far, evaded him. With such confident performances possible, like the day Denis had in Abu Dhabi, it is easy to imagine him on the Tokyo podium just a few months ago. 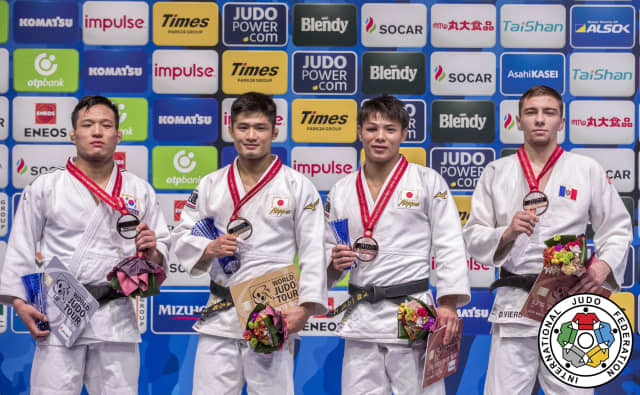 What a podium! Vieru won bronze at the 2019 Worlad Championships in Tokyo

“It was my first Olympic Games and I was aiming only for the gold medal. I was confident I could be in the final but one month before the Games there were some challenges and I felt quite isolated in Tokyo. I even had doubts about competing at all but I wanted the medal. Now I still want a medal and so I will stay in the -66kg category and continue towards Paris. I feel confident in the weight and know the opponents. For Paris I think I deserve a medal and I will do my best to achieve that." 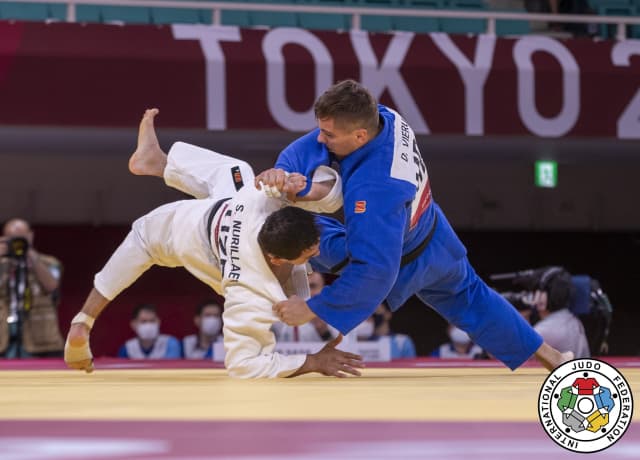 "I have taken on a nutritionist to help with my diet so I can stay comfortable in the category. It’s important for me to stay healthy, really it’s the most important thing. I see people out there who are 50 but look 30 and so that’s part of my life’s aim, to always be in good health.”

Denis Vieru, recognised as one of the greatest technicians on the circuit, is building a judo life but also a full life beyond the mat, recognising all the opportunities available to explore his slice of the human experience. From education to training to family and health, he has covered all bases and it seems unlikely that he will slow down in any field. We have a lifer on our hands, one who is determined to work for it all and that is special.