What a Way to Conclude Our Time in Tokyo!

Written by Jo Crowley on 31. Jul 2021
Photographs by Gabriela Sabau, Emanuele Di Feliciantonio
Share
The long-awaited Tokyo Olympic Games has ended for the judo family. The fragile journey here was worth it! There have been 8 days of incredible triumph, surprising victories, tearful losses and huge celebrations, as athletes and their teams were finally able to conclude their Olympic cycle the right way, on the tatami at the Nippon Budokan.

IJF President Mr Marius Vizer has been overseeing every minute of the competition and today spoke about today’s unique Olympic team event and the whole Olympic judo experience, “After closing the individual competition successfully, everybody enjoyed the last day, in the atmosphere of the first ever Olympic Judo Mixed Teams competition. We must thank the IOC and Mr Thomas Bach for being open and supporting us bringing this team event to fruition.

Congratulations to all participating teams for their involvement in this exciting debut competition and also to their national federations, all of whom have worked so hard to enable their athletes to fulfil their sporting goals in Tokyo. Of course there must be a special mention for all medal winners; they have achieved something extraordinary in very challenging times. I thank all of our judo family involved in the organisation of the judo event here, for providing the most professional platform on which to show the best judo in the world."

"There have been an inexhaustible number of highlights brought to us by our judoka. Hifumi Abe and Uta Abe, brother and sister winning gold medals together on day 2, is a unique and very special part of this Games, not just for the world of judo, but across all sports. The silver medal of Saeid Mollaei brought a wonderful conclusion to an unimaginably difficult period for him and we are proud to have supported him so that he could again perform at his best, in an environment secured by fairplay. We welcomed Saudi Arabia’s Tahani Alqahtani to the Olympic judo family and also applauded as she and Israel’s Raz Hershko fought in the first round of the individual competition and did so with nothing but respect." 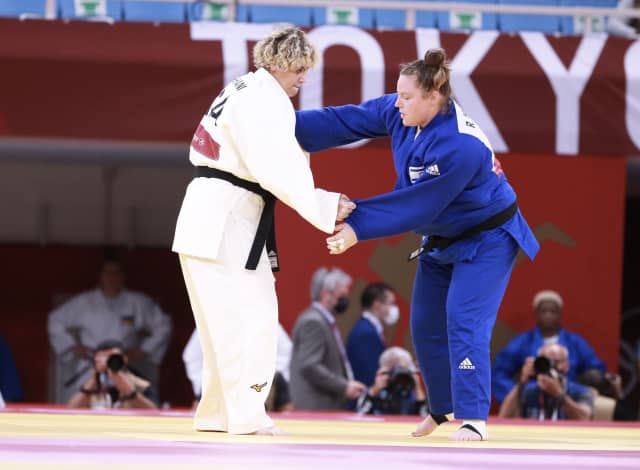 An historic moment for judo: KSA and ISR meet on the Olympic tatami.

"Finally, the successful participation of the Japanese team, to win 9 gold medals as the host nation and then bring their stars to an electric mixed team final, showed class and incredible judo ability. The volunteers and organisers have been nothing short of perfect and we are now ready to move forward into the short cycle towards Paris. Tokyo has given us much.”

Dr Lisa Allan, IJF Events Director, had the task of liaising with local organisers to ensure all details of the tournament met both Olympic standards and IJF regulations. “We are super happy to have the mixed teams as part of our Olympic judo provision. As it’s the first time, it means there’s been some learning for us, but it’s been very exciting. We’ve enjoyed a great atmosphere and with spectators back with us next time, we can see the roof coming off in Paris, especially with such a strong French team at home." 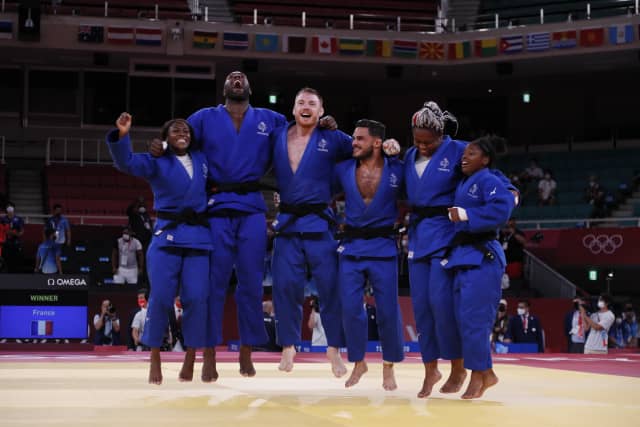 The French team celebrate their final victory in Tokyo.

"Results don’t always go the way we expect, such as Ono’s match against Wandtke of Germany. It has been amazing to see the gender equity of the teams so beautifully respected, with the purest support among the delegations.

We have enjoyed such a good partnership with Tokyo 2020 and the AJJF and the volunteers have been outstanding. We have former world medallists here as volunteers and having their experience on board is invaluable.”

Operationally the Olympic judo event runs with the IJF IT Team and the experts from Omega. Elisabetta Fratini of the IT Team said, “The teams is a fantastic event, a great plus for us. It’s the most magnificent way to close out judo at the Games. I love how they behave outside the fights, with the whole team being part of the coaching; their support for one another is second to none. With the public it will really be the cherry on the icing of the cake for this amazing week, at the end of the next cycle.

Japan is a paradise for organisation. The Omega team have known us for a long time and so it’s really smooth, like being back with a group of friends, which makes the competition so enjoyable.” 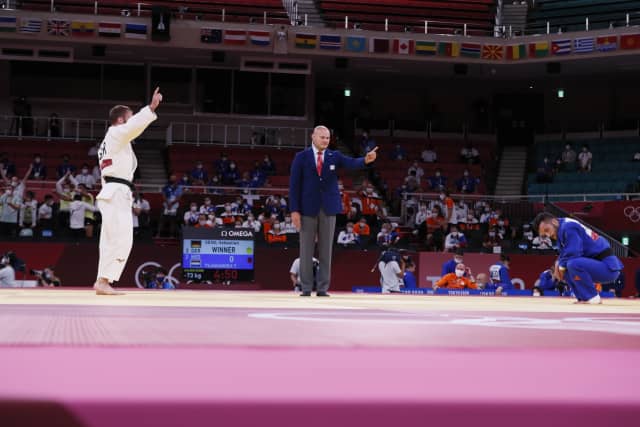 Omega in the background supporting throughout.

The Olympic Games always brings the world unforgettable moments, unexpected highs and of course new records and the most amazing memories.