13 Paris debutants to look out for at #JudoParis2017

Written by Mark Pickering on 09. Feb 2017
Share
Every judoka remembers their first Paris tournament. Whatever the latest batch of newcomers go on to achieve in the sport, they will always savour the first time they walked out in front of 15,000 judo lovers in the French capital.

The 2017 crop is extra significant as this year’s event sees a new beginning with the launch of a new Olympic cycle towards Tokyo 2020. Some of the names below could conquer the world at the next Olympiad and a few should even challenge for honours on their Paris debut.

Here are 13 Paris debutants to keep tabs on this weekend:

Boy wonder Abe Hifumi (JPN) is already the most famous teenage athlete in Japan as one of the faces of his country’s Tokyo 2020 promotions. The two-time Grand Slam winner has deliberately been held back by Japanese head coach Inoue Kosei, who has been loyal to his veteran judoka and patient with this 2020 generation who have all been waiting anxiously to be released onto the IJF World Judo Tour. World number six Abe starts as one of the favourites in France and will surely earn selection for his first World Championships if he can medal in Paris at his first attempt.

Madrid European Open winner David Tekic (GER) will make his IJF World Judo Tour debut at one of the circuit’s most prestigious events. Tekic has Junior European medals to his name and this weekend is all about the experience for the young Germany judoka. A baptism of fire it may be but Tekic will be looking to take as much as he can from the weekend and the post-event training camp as he looks to step up to senior level with the Olympic qualification period set to begin in 2018.

Qingdao Grand Prix silver medallist Lucy Renshall (GBR), who is based out of British Judo Centre of Excellence in Walsall, England, is one Great Britain’s leading youngsters. Renshall, 21, was released onto the IJF World Judo Tour in the post-Olympic period which her country wisely used to blood their 2020 hopes. Renshall, who went to three Grand Prix and the Abu Dhabi Grand Slam last year, now arrives in Paris with vital World Judo Tour experience and will be looking to hit the ground running in 2017.

Tokai University member Nagayama Ryuju (JPN) won his home major, the Tokyo Grand Slam, at the first time of asking in December as he upstaged teammate and former world champion Takato Naohisa (JPN) who looks set to be his competitor for the -60kg spot for Tokyo 2020. Junior World Championships winner Nagayama, 20, is unseeded in Paris and is the therefore most dangerous judoka in the category as a potential spoiler to the major names including Takato. 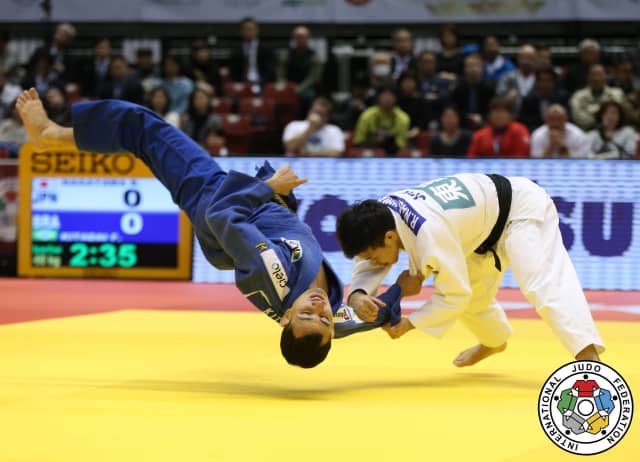 Former Cadet World Championships winner Louis Krieber Gagnon (CAN) made his IJF World Judo Tour bow in 2015 at the Abu Dhabi Grand Slam. The 20-year-old Canadian then waited over a year for another chance to test himself against the best as he fought at the Tokyo Grand Slam in December 2016. Krieber Gagnon, who lost to French star Alexandre Iddir in the second round in Tokyo, looks set for his first full season of IJF World Judo Tour action and to has the tools to live up to Judo Canada’s high expectations for him over the course of the new Olympic cycle.

Unknown Iida Kentaro (JPN) won Tokyo Grand Slam bronze on his IJF World Judo Tour debut in December and the 18-year-old has been rewarded with a Paris debut as he targets back-to-back Grand Slam medals. Iida, who has been touted in domestic circles as an heir to his head coach and all-time great Inoue Kosei, only lost out to eventual winner Kirill Denisov (RUS) – one of the most physical and experienced judoka in the game – in Tokyo and that was just by a single shido. A new environment and the pressure and intensity of the Paris Grand Slam will be the most challenging step of Iida’s young career but there should not be eyebrows raised if he is in medal contention on Sunday evening.

Abu Dhabi Grand Slam silver medallist Anna Maria Wagner (GER) took a notable fifth-place at the Tokyo Grand Slam and has adjusted well to life on judo’s elite stage. The German youngster will become a key member of her national team in 2017 and Grand Prix and further honours seem to be on the horizon. The experience of two Grand Slams in the second half of 2016 will give Wagner a degree of familiarity with the feeling and demands of one of the IJF’s blockbuster events and the confidence to go out and compete against the best of the best. The Paris tournament though is one of a kind and the atmosphere and scale is truly unique. A heady mixture of nerves and excitement will evaporate if Wagner can come through her first contest with a win.

Former Junior World Championships winner Asahina Sarah (JPN) started judo at the Kodokan and is now a member of Tokai University. Asahina, a keen swimmer and water polo player, will be supported by her parents who are travelling in on Friday to watch the IJF season opener. The 20-year-old judoka, who is in pole position for 2020 albeit at this early stage, has won all three colours of Grand Slam medals available and most recently won her country’s Grand Slam in 2016. 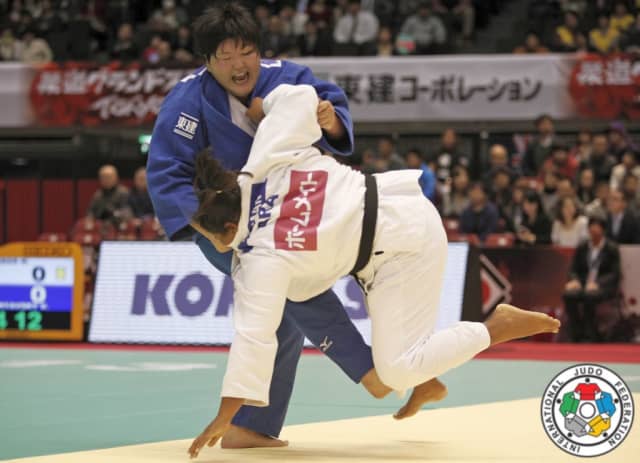 Brazil look set to reinvigorate their ageing team with the introduction of some juniors with untapped potential. While many of their elder statesman look set to continue competing for the immediate future, a sprinkling of youth will go on a long way to generating some new energy and intrigue around one of the sport’s powerhouse nations following Rio 2016. Junior Pan-American Championships winner Larissa Farias (BRA) is one such talent and the -48kg judoka has the opportunity to fill the number one spot left vacant by former Olympic champion Sarah Menezes (BRA) who has moved up to -52kg.

Birmingham judoka Max Stewart, who is also based at the British Judo Centre of Excellence, which is home primarily to the best judoka aged 18 – 23 in Great Britain, made significant inroads on the IJF World Judo Tour in 2016. The 23-year-old, who is the son of Seoul 1988 Olympic bronze medallist and Great Britain coach Dennis Stewart, won the Qingdao Grand Prix in November and will surely step up to Grand Slam honours in 2017. Stewart can also expect a lot of support in Paris from travelling British fans who will be as vocal as they will be plentiful.

European u23 Championships bronze medallist Laura Martinez Abelenda (ESP) makes her IJF World Judo Tour debut at the show of shows in Paris on Saturday. The teenage Spaniard from Villa de Vallecas, Madrid, is one of the youngest judoka in the competition and her skills have undoubtedly been honed by training with two-time Grand Slam winner Julia Figueroa (ESP) who could elect to make the switch to -52kg early in the new cycle in order for both judoka to shine at Tokyo 2020.

France’s 56-strong home team has everything from Olympic champions and world medallists to budding judoka who will one day control the rhythm and emotions of the Bercy crowd. Tunis Afrian Open bronze medallist Sephora Corcher (FRA) has showed all the quality at the junior level to suggest that she is one of the leading hopes of France’s women's team. Corcher, who now has her former cadet team coach and judo great Lucie Decosse (FRA) as one of her senior team coaches, finished fifth at the Abu Dhabi Grand Slam last year and will be craving her first outing at the Paris Grand Slam in front of her home fans and family.

Cadet European Championships bronze medallist Toni Miletic (BIH) was his country’s only judoka to medal at the Cadet World Championships in Sarajevo in 2015 with bronze on home turf. Miletic, who debuted on the senior circuit at the Zagreb Grand Prix last year, has, along with this teammates, been financially supported to compete in Paris by the International Judo Federation.