A Great Opening of the 2021 Season

Written by Nicolas Messner on 11. Jan 2021
Photographs by Marina Mayorova, Emanuele Di Feliciantonio
Share
2 Gold Medals for Korea, One Gold for Kosovo, France and Japan. Just hearing the delicate sounds of flies flying and the air conditioning purring does not mean that the show was not great. Due to the current health situation and the very strict procedures required, including not having public spectators, throughout the day the sound level in the venue was limited but matches were chained one after an other at a frantic pace. 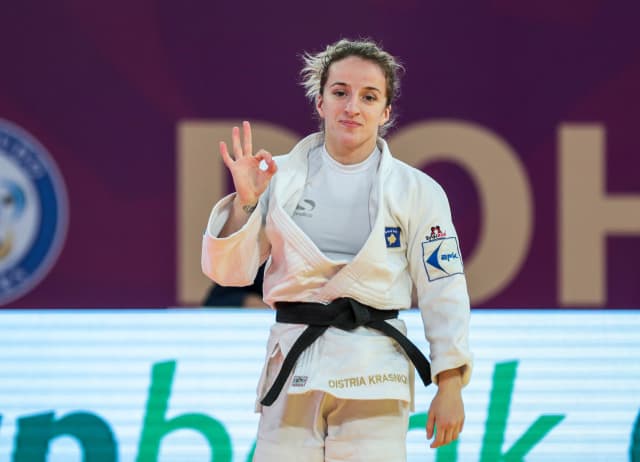 The new approach to working, put in place by the International Judo Federation and the organising committee of the World Judo Masters in Doha, was brought out of no other choice, but what seemed impossible a few months ago is now possible again and with success. Thanks to the involvement of everyone at all levels of the organisation, the Doha World Judo Masters are taking place and everyone can be proud. Countries around the world can participate in a world-class event, can perform at their best and can still transcend themselves to claim the precious World Masters title.

During this first day of competition, five categories were at stake, three for women and two for men. Kosovo, France and Japan took a gold medal each for the women and both male gold medals went to Korea. So far 12 countries have had representatives step up on to the podium.

Arriving in Doha with the world number one bib, Kosovan judoka Distria KRASNIQI, already a winner of the Masters in 2019, had additional pressure on her shoulders. However, this did not prevent her from reaching the final after a flawless run against Marusa STANGAR (SLO), Catarina COSTA (POR) and Melanie CLEMENT (FRA), winning two of her confrontations by ippon. In the final, in less than a minute, KRASNIQI had taken the measure of her opponent and had scored a first waza-ari with uchi-mata. Well installed, with a strong right hand on the back, the Kosovan mastered her subject perfectly and less than a minute later she scored a second waza-ari with a ko-soto-gake, allowing her to win her third gold medal at the Masters. 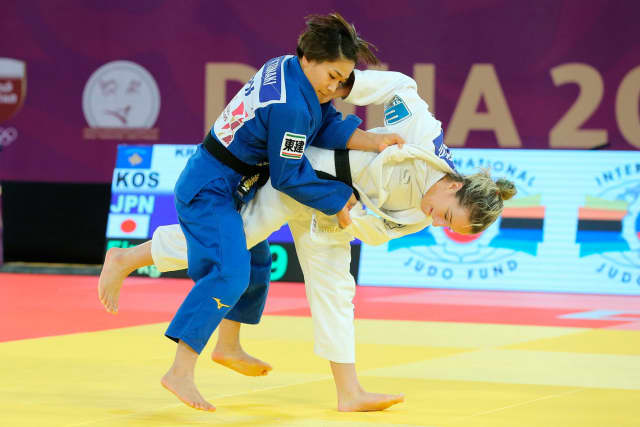 In the final, we could legitimately expect to see her face the double world champion, Daria Bilodid (UKR), who made her comeback in the lightweight category after a test in -52kg during Grand Slam Hungary last October. Yet it was TONAKI Funa (JPN), world champion in 2017, who won with a waza-ari against Bilodid, whose reach and the last desperate attacks at the end of the match did not allow her to score. 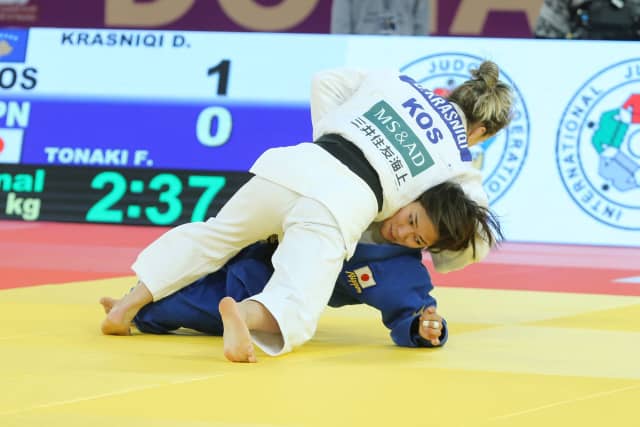 Very disappointed not to be able to participate in the final, Daria Bilodid entered the contest for the bronze medal in which she was opposed to Catarina COSTA (POR). Perfectly concentrated, BILODID gave her opponent no chance and in under 60 seconds, during a sequence on the ground, immobilised her with her favorite technique, sankaku-jime. Coming to Doha to win gold, the Ukrainian leaves with bronze, a small consolation for the one who dreams of only first place.

In the other match for bronze, Urantsetseg MUNKHBAT (MGL), the first female world champion in Mongolian sporting history, back in 2013, was opposed to Melanie CLEMENT (FRA), third in the Masters in China in 2019. The Frenchwoman stepped onto the tatami, knowing full well that she had to be vigilant on the ground, given the Mongolian mastery of the exercise. For most of the match, CLEMENT appeared to be able to dodge MUNKHBAT's ne-waza, but as the end of regular time approached, the Mongolian finally applied an unstoppable arm lock, to score ippon and win her third medal at a World Judo Masters. 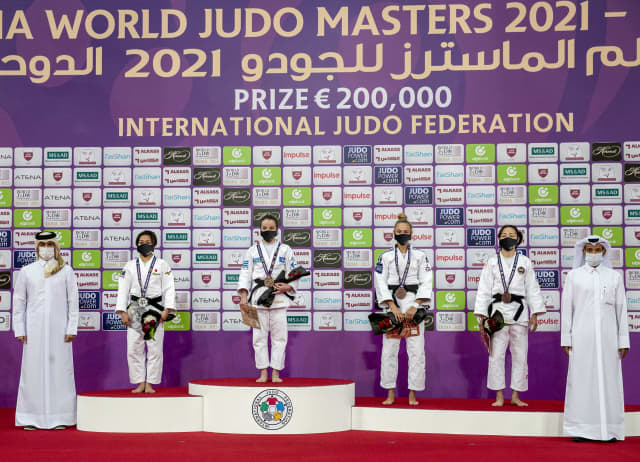 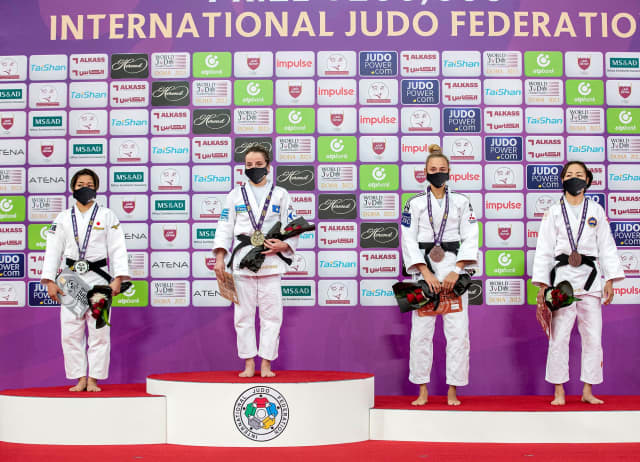 Entering the final of -52kg, Amandine BUCHARD (FRA) showed that she will be one of the favourites for the Olympic title, especially as she did it by defeating the reigning Olympic Champion, the Kosovan Majlinda KELMENDI. Until the Buchard match, Kelmendi had not encountered any difficulty during the preliminary rounds. The confrontations between BUCHARD and KELMENDI are adding up, since the two young women have met three times before, but for the first time the Frenchwoman wins, after a very long golden score and a decisive penalty; something to add to her confidence. 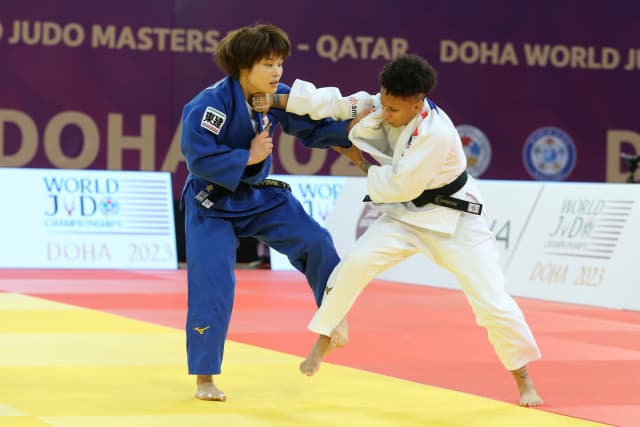 For the attribution of the gold medal, in her way BUCHARD found the Japanese judoka SHISHIME Ai, world champion in 2017 in Budapest and already a winner of the Masters in 2019 in Qingdao. Already three times a Masters finalist but never a gold, would Buchard be able to overcome the run of play? It took several minutes of golden score to get an answer as it was a very balanced match. It ended with a third penalty against the Japanese fighter, finally offering the gold medal to BUCHARD. 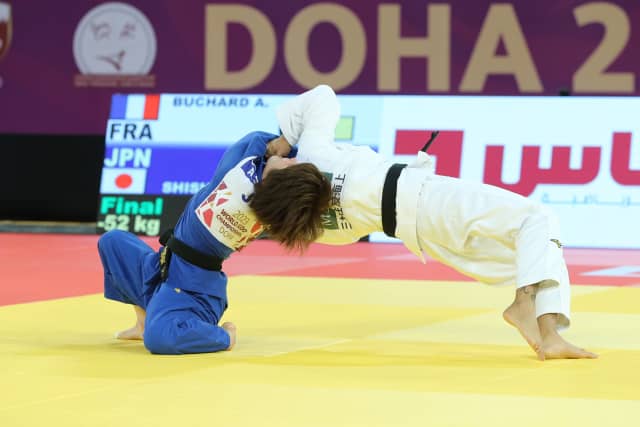 The other Frenchwoman in the category, Astride GNETO, also had a chance to win a medal, as she was opposite the Hungarian Reka PUPP, in the first match for a bronze medal. After five minutes of golden score and a very tight match, GNETO won, as PUPP was disqualified with a last shido.

The London 2012 Olympic medalist proved that she was still at the highest level by qualifying for the second bronze medal, against the reigning Olympic champion, Majlinda KELMENDI. It is interesting to note, that the two competitors are of the same generation, one being 29 years old (KELMENDI) and the other 30 years old (VAN SNICK), yet they each had their Olympic Games, in London for the Belgian and in Rio for the Kosovan. Today facing each other for the bronze medal, therefore, was indicative of two amazing athletes who are still giving everything.

It is certain that for the moment, Majlinda KELMENDI is no longer as dominant as she has been in the past, but there is still a long way to go from here to Tokyo. She is no less a competitor at heart and she controlled VAN SNICK without too much difficulty to get on the podium. 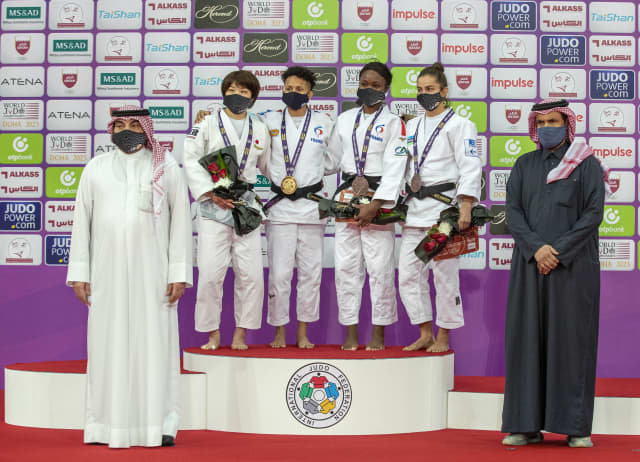 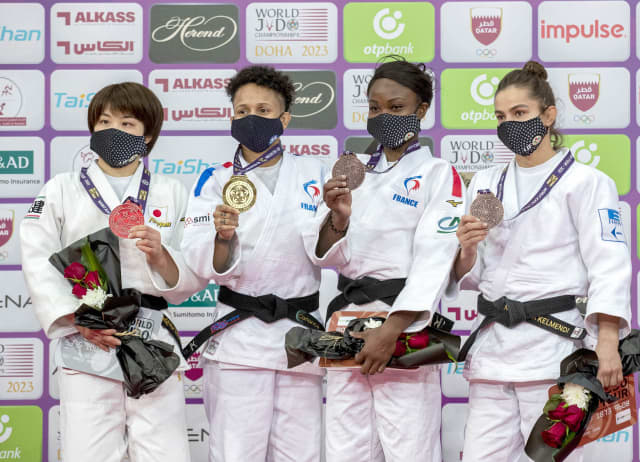 Being world number one and in the absence of her compatriot and reigning world champion, Christa DEGUCHI, Jessica KLIMKAIT (CAN) had a great card to play to consolidate her role as world leader. However, she found in her path an increasingly successful Frenchwoman, whose technical outbursts had impressed during the 2019 world championships, although she could not climb on the podium. Thus after a bronze medal at the last European Championships in Prague, Sarah Leonie CYSIQUE (FRA) raised the bar by stepping into the Masters final. It should be remembered that last year she finished 7th in the competition. 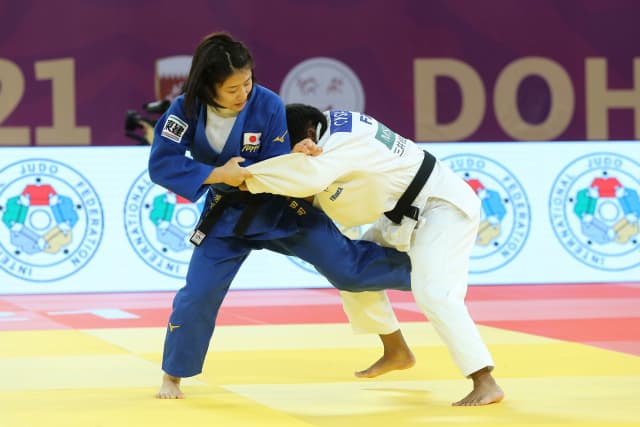 After nearly 5 minutes of golden score and a breathless final, so much so that you could hear the French judoka’s shortness of breath. CYSIQUE seemed to have found the solution to control YOSHIDA, but she collapsed in the end, to be immobilised. CYSIQUE certainly has the makings of a great champion. Ahead of her, an athlete with an impressive prize list, YOSHIDA Tsukasa (JPN), world champion in 2018, winner of the 2018 Masters and seven times a gold medalist at grand slams, to speak only of the most striking results. 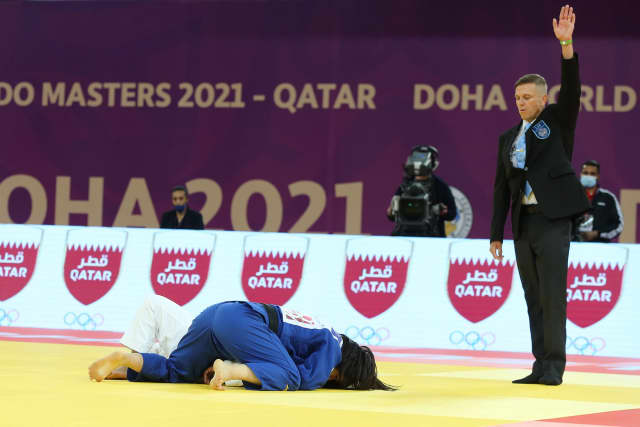 In the first match for bronze, we found the veteran Telma MONTEIRO (POR), winner of the same World Judo Masters but back in 2011, in Baku. Monteiro's longevity is absolutely incredible at this level of competition. She was pitted against a younger but no less talented athlete, Nora GJAKOVA (KOS). Another golden score was necessary for GJAKOVA to score waza-ari with a counterattack, to win her second bronze medal in a Masters.

Finally for day one, in the second bronze medal contest, the world number one, Jessica KLIMKAIT (CAN) faced the Israeli Timna NELSON LEVY, who was robust and rough throughout the day. 13 seconds were enough for KLIMKAIT to score a clear ippon with o-uchi-gari and in a third medal in the World Judo Masters. 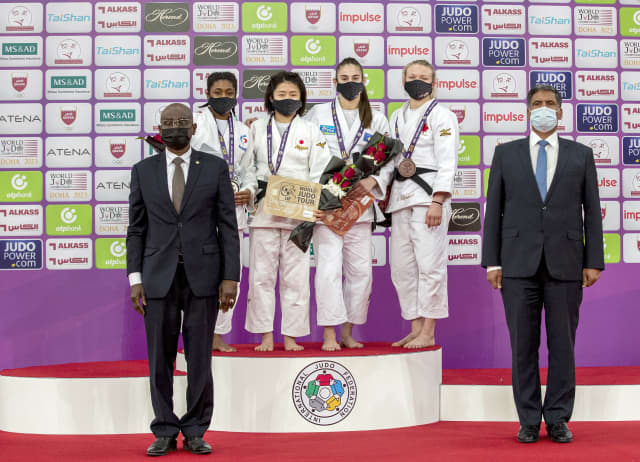 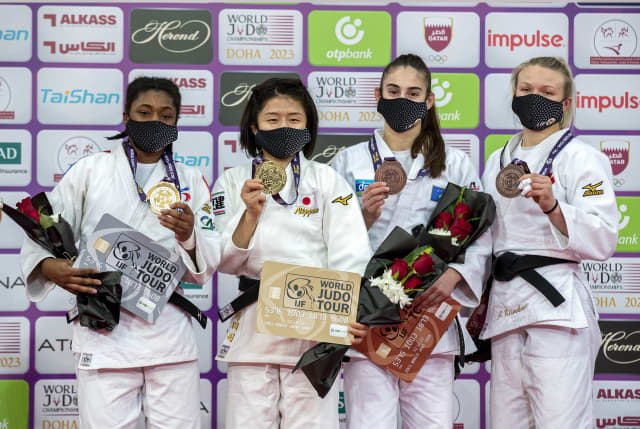 In the light weight category times were difficult for the favourites, as many of them, like Robert MSHVIDOBADZE (RUS), Francisco GARRIGOS (ESP), Sharafuddin LUTFILLAEV (UZB) or Yeldos SMETOV (KAZ) were quickly eliminated, opening boulevards to outsiders. This is how YANG Yung Wei (TPE), second in the Düsseldorf Grand Slam in 2020, pushed the doors to the final against KIM Won Jin (KOR), winner of the Tel Aviv Grand Prix in 2020. These two athletes have remained on the top level among the world’s competitors. 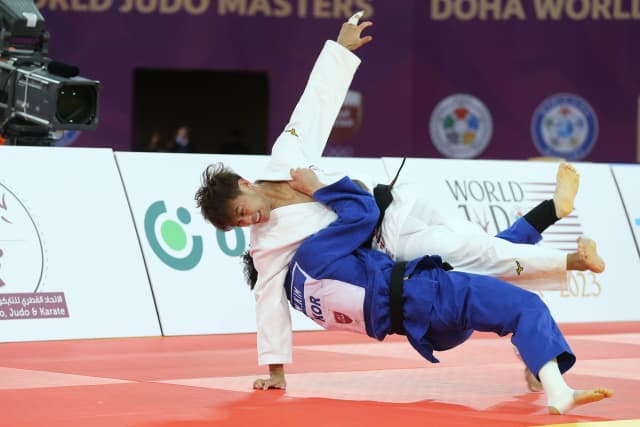 What characterised nearly three quarters of the final was the stability which the two athletes prevented loss, neither seeming to be able to endanger his opponent, before KIM finally succeeded in throwing YANG strongly, with speed and on his back with control, for a magnificent ippon via ura-nage (counterattack). 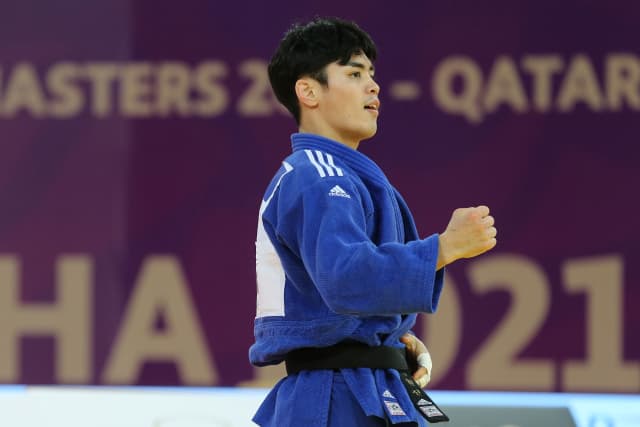 The first bronze medal was contested by Tornike TSJAKADOEA (NED) and Walide KHYAR (FRA), but due to an injury KHYAR could not compete and the bronze medal went to TSJAKADOEA.

In the second contest for a bronze medal, the two Russians, Albert OGUZOV (RUS) and Yago ABULADZE (RUS), found themselves in a fratricidal match. OGUZOV scored two waza-ari, the first with an opportunist’s de-ashi-barai and the second from a hip movement, winning his first medal at that level. 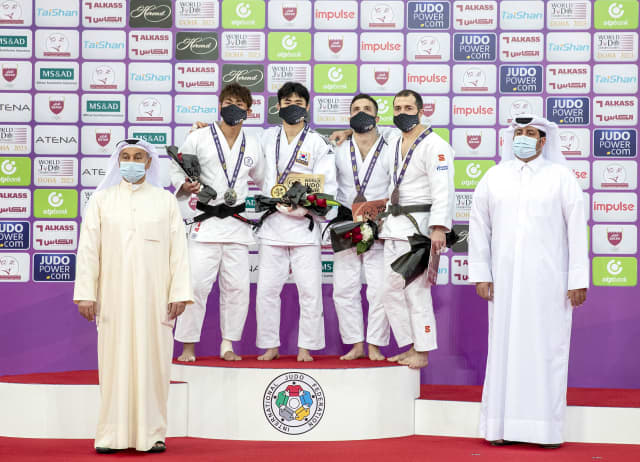 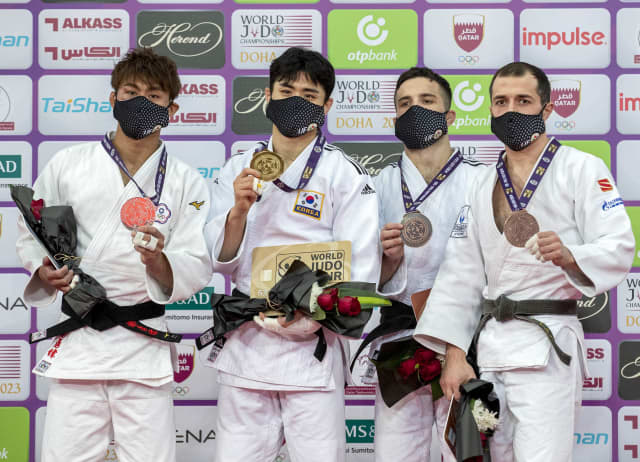 -66kg: BAUL Adds Gold for Korea With the number one seed, Manuel LOMBARDO (ITA), being defeated early, it was Denis VIERU (MDA) who forced the door of the first semifinal, which he ultimately lost to the 2015 world champion, the South Korean AN Baul. In the final, the latter faced the Israeli Baruch SHMAILOV, now a regular at the Masters final block, since he finished in second place in the event in 2018. 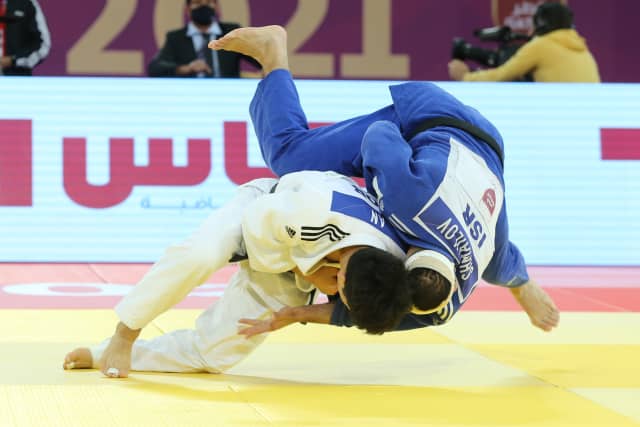 Once again we saw a particularly close fight in which neither of the finalists seemed able to exploit the slightest flaw in their opponent's defence. After a long period of golden score and two penalties on each side, it was finally AN Baul who used his experience and succeeded in throwing SHMAILOV, using a dropping eri-seoi-nage. 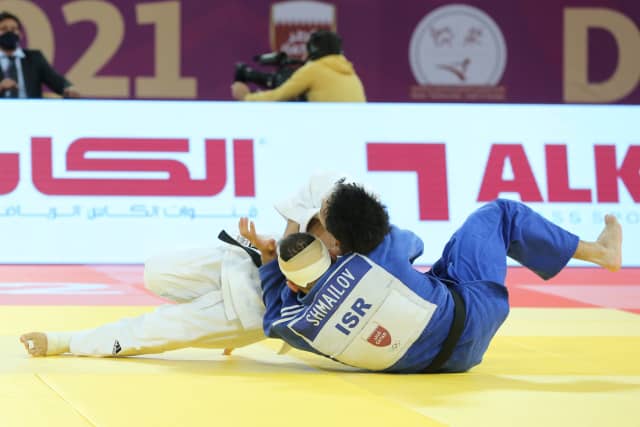 It was therefore a difficult day for the favourites in the category as most of them were eliminated during the preliminary rounds. One of the survivors was Kherlen GANBOLD (MGL), seeded number two, who fought Aram GRIGORYAN (RUS) in the first bronze medal contest. The Russian won after his opponent was disqualified with a third shido.

In the second match for bronze, another favourite, Vazha MARGVELASHVILI (GEO), was pitted against Moldovan Denis VIERU, who has had a very good day but who in the last golden score couldn’t find the right solution and was finally thrown with a yoko-tomoe-nage for waza-ari, offering the bronze medal to Vazha MARGVELASHVILI 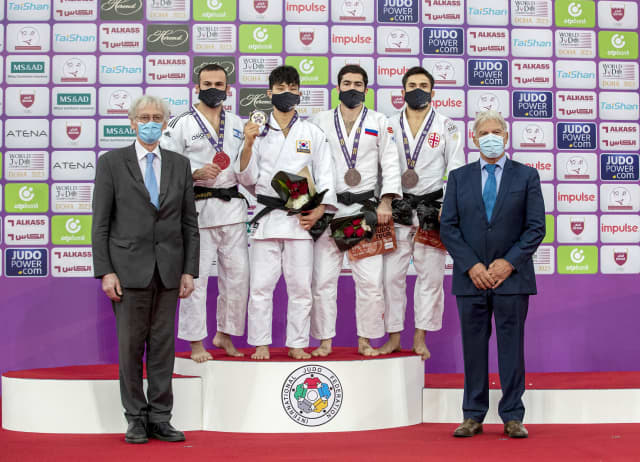 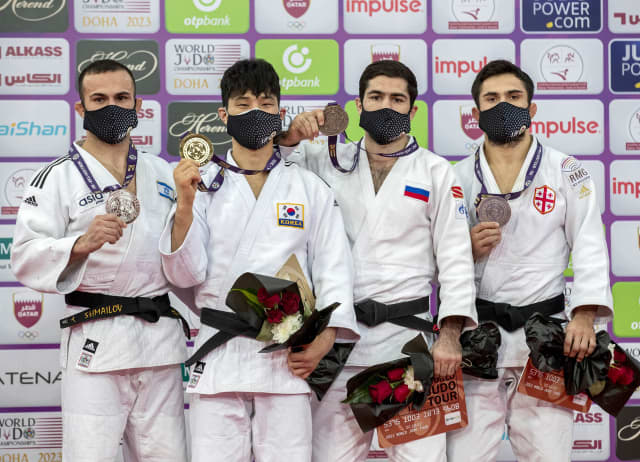