Written by Nicolas Messner on 10. Mar 2018
Share
Today four categories were in action in Morocco for the Agadir Grand Prix 2018 edition, day 2. Discover below all the results of each category and follow us on social media. Stay tuned to discover more about that second day of competition and to read our analysis of the day.

-63kg: Slovenia Doubles their Gold Harvest with LESKI
The first final of the second day of competition of the Agadir Grand Prix, Morocco 2018, saw the 21 year-old and winner of the last Düsseldorf Grand Slam, Andreja LESKI (SLO) and Katharina HAECKER (AUS) competing for gold and whatever the result would be, it would be the first medal at that level for Australia as so far the Oceanian country only won three bronze medals in Grand Prix. This final was not really a surprise though, as both athletes were the top seed competitors of the category. After one minute and twenty seconds of observation, LESKI was penalised a first time for passivity. But after a confused action that required a video review, a waza-ari with a ko-uchi-gari was logically awarded to the Slovenian to take the lead of the final. As the Australian was taking risks, she exposed herself to counterattacks. Waiting the perfect moment, Andreja LESKI finally executed an o-goshi technique for a second waza-ari giving her her first gold medal in a Grand Prix, after her gold medal in a Grand Slam a couple of weeks ago. 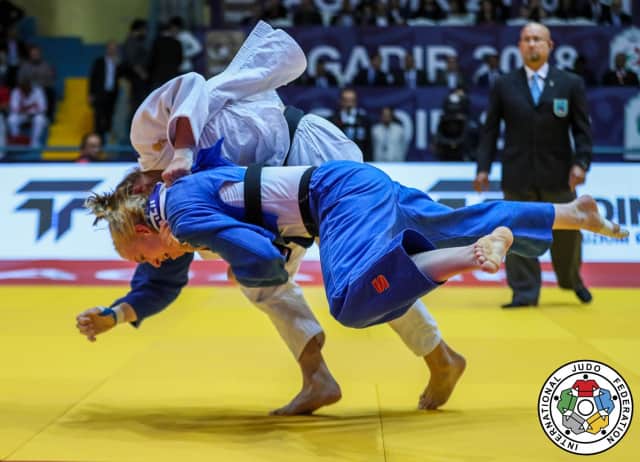 The first bronze medal contest opposed Yasmine HORLAVILLE (FRA), who so far has not record on the international scene and the bronze medallist of the 2014 Junior World Championships, Vivian HERRMANN (GER). After a few second, HERRMANN launched a first uchi-mata for no score, which didn't really put the French in danger and not athletes kept observing one another trying to find a solution to throw. But with one minute left on the scoreboard, HORLAVILLE and HERRMANN were only penalised with one shido and that was still the situation at the end of the regular time. After fifteen seconds in golden score, HORLAVILLE was very close to score but the German escaped at the very last moment. Then the German was penalised again getting close to a third penalty which would give the victory to HORLAVILLE and this happened a few seconds later, offering the spot on the podium to the young Yasmine HORLAVILLE.

In the second bronze medal contest, Morocco had one chance to add one more medal as Sofia BELATTAR (MAR) was opposed to Inbal SHEMESH (ISR), who won the Warsaw European Open earlier this year. As both competitors entered the filed of play, the noise level raised in the arena. The Moroccan was the first to score a waza-ari but this advantage was cancelled by the video refereeing. The least that can be said is that the rhythm of the contest was very high, BELATTAR trying everything to throw SHEMESH as the Israeli was waiting for the counterattack, which she perfectly executed scoring a waza-ari that she immediately followed on the floor with an immobilisation for ippon. At the end of the match, SHEMESH helped BELATTAR to stand up in a very fairplay manner. 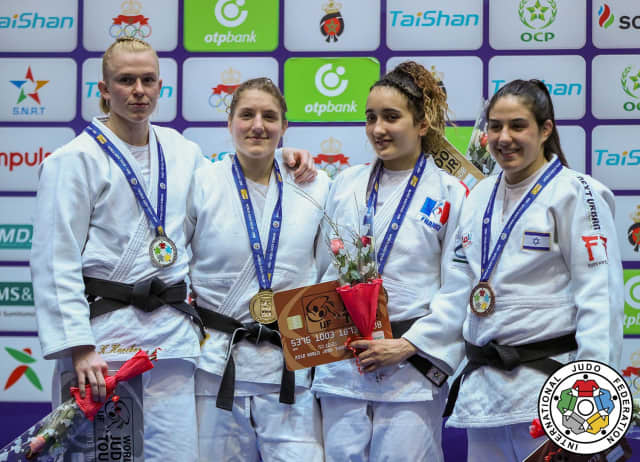 -70kg: NIANG Offers the Gold to Morocco
The final of the women's -70kg was the one which was expected in the morning as both athletes were the top seed of their category. But it was even more expected by the Moroccan public as their hero Assmaa Niang qualified against Tokyo Grand Slam bronze medallist, Maria PEREZ (PUR). But the final was the quickest of the day so far as after a few seconds Maria PEREZ executed a forbidden technique that was awarded with a hansokumake (disqualification) offering an incredible gold medal for NIANG and the whole Morocco. Assmaa celebrated by showing a heart to the public where the orphans from the institution that the IJF, the Moroccan Judo Federation and Assmaa herself visited a couple of days ago, were present. 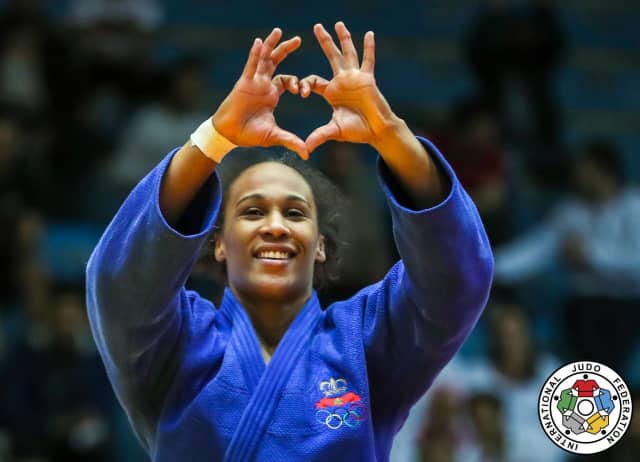 The first bronze medal contest opposed the Swiss Alina LENGWEILER and the Tashkent Grand Prix bronze medallist Anka POGACNIK (SLO). Both athletes were not halfway to the end yet, but POGACNIK had already scored a first waza-ari followed with an immobilisation but not enough to score ippon, and LENGWEILER penalised twice. A few seconds later, POGACNIK scored again with the same technique (harai-makikomi) for a clear victory and one more medal for Slovenia.

In the second bronze medal contest, Szaundra DIEDRICH (GER) faced the Tunis Grand Prix silver medallist, Roxane TAEYMANS (BEL). Just before the last two minutes, the Belgian was penalised twice within a few seconds only as she was pushing down her opponent without building positive judo, then was holding the judogi of DIEDRICH on the same side without immediately attacking. DIEDRICH definitely took the advantage as she scored a waza-ari with a o-uchi-gari almost perfectly executed. The German could keep that score until the end to win her fifth medal in a Grand Prix. 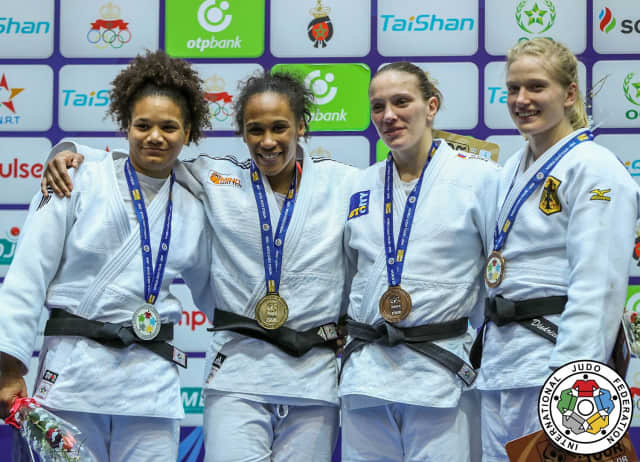 -73kg: CILOGLU Captures Gold at the Very Last Second
In the men's -73kg weight division, Musa MOGUSHKOV (RUS), Abu Dhabi Grand Slam silver medallist, was the favourite and he did not disappoint his fans as he qualified for the final against the young Turkish Bilal CILOGLU, who won the Cadets European Championships in 2015. With his site right handed position, leg inside the legs of his opponent, waiting to change direction into a sumi-gaeshi technique, CILOGLU bothered many of his opponents during the preliminary rounds. But this attitude caused him the first two sheds of the final as this totally blocks the opponent to build positive judo. Then MOGUSHKOV was also penalised and was maybe a little too much expecting the third shido to come, but this is Bilal CILOGLU who literally clinched the medal as he scored a waza-ari exactly on the gong. 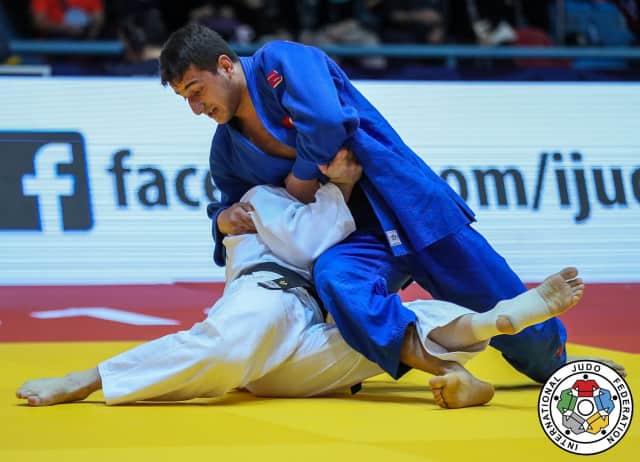 The first bronze medal contest opposed Bekadil SHAIMERDENOV of Kazakhstan and the local Ahmed EL MEZIATI (MAR). Half way to the end, SHAIMERDENOV had already scored one waza-ari and both athletes were penalised several times, 1 shido for the Kazakh and 2 for the Moroccan. The last minute of the match was played on a very high rhythm, MEZIATI pushing his opponent in order to find an opportunity to come back to the score, but SHAIMERDENOV could finally control the Moroccan to keep the bronze medal around his neck.

The second bronze medal contest saw Anthony ZINGG (GER), who won a beautiful bronze medal on the occasion of the first The Hague Grand Prix at the end of 2017, and the Zagreb Grand Prix gold medallist Dmytro KANIVETS (UKR), facing for the last spot on the podium. After one minute and a half, both athletes were penalised with a first shido for blocking their opponent and KANIVETS was awarded with a second penalty a few seconds later for the same reason. As there were entering the last minute and seemed to go toward the golden score, the Ukrainian launched an acrobatic uchi-mata to score a waza-ari. 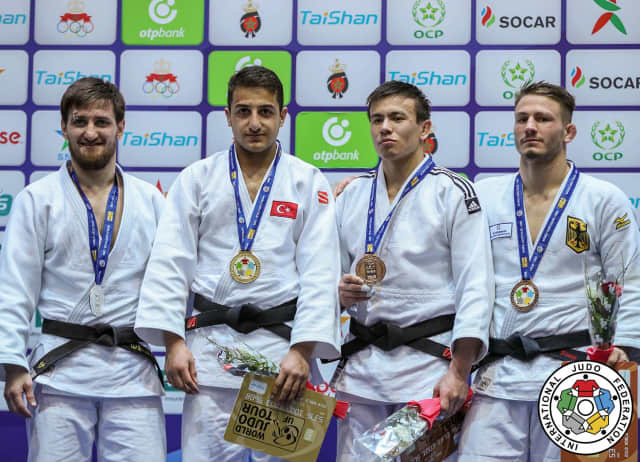 -81kg: ALBAYRAK Defeats the Olympic Champion in the first rounds and Wins
Who could defeat the current Olympic Champion, Khasan KHALMURZAEV (RUS) in the Agadir Grand Prix? The answer did not seem obvious in the morning of the competition, but Vedat ALBAYRAK (TUR), signed a beautiful exploit by defeating KHALMURZAEV in quarterfinal, before qualifying for the final against Matthias CASSE (BEL), who had the opportunity to improve his result from The Hague where he won a bronze medal. After one minute and twenty seconds, ALBAYRAK scored a first waza-ari with a beautiful combination, o-uchi-uchi-mata and back to o-uchi that totally surprised Matthias CASSE. The Belgian was very close to scoring with another interesting ippon-ko-uchi, but like a cat, the Turkish escaped. With the last minute approaching, Vedat ALBAYRAK scored a powerful ippon to conclude the second day of competition. 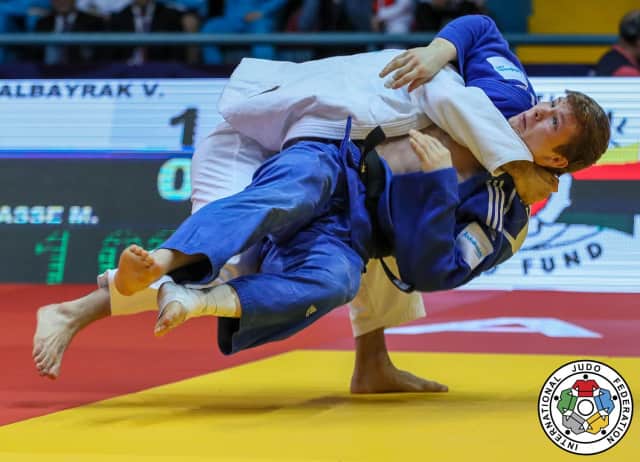 The first bronze medal contest opposed Olympic champion, Khasan KHALMURZAEV (RUS) and Dominic RESSEL (GER), Düsseldorf Grand Slam bronze medallist. It is clear that KHALMURZAEV had the mask of the bad days and that he is not back to the level that took him to the top of the Olympics. Lacking of physical condition, and of accuracy in his attacks, he was penalised twice during regular time and really close to get a third penalty against RESSEL when he finally scored a beautiful ippon with a saving ko-soto-gari. The Olympic champion is on the podium, but what a difficult day for him.

In the second bronze medal contest, Dominik DRUZETA (CRO) was opposed to Anri EGUTIDZE (POR) and it took exactly 4 minutes and 50 seconds for EGUTIDZE to finally score a beautiful left handed harai-goshi for ippon. 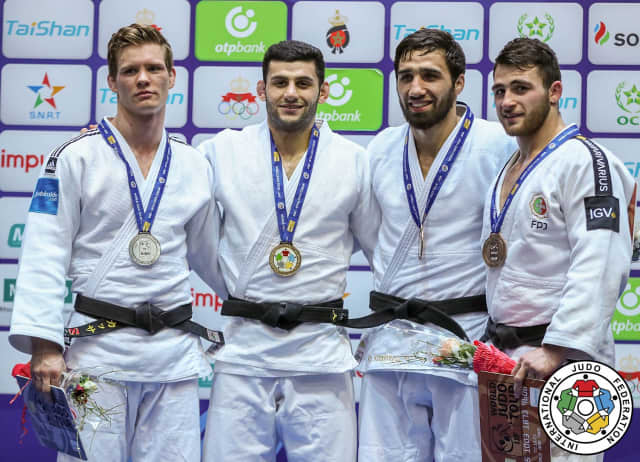