Written by Nicolas Messner on 04. Mar 2018
Share
On Saturday, March 3rd, the Austrian Judo Federation and the International Judo Federation organized in Vienna a gala to celebrate 70 years of judo history in the country. On this occasion, hundreds of Austrian and international guests were gathered under the gilding of the 'Srauss Saal' of the Kursalon Vienna, surrounded by the so special classical musical atmosphere of this city located in the heart of Europe, at a crossroads of influences stirring a multitude of cultures.

More accustomed to the tatami, the guests, who had sometimes made the trip from far away, had donned their best evening dress to celebrate seven decades of passion for a sport that is nowadays, in the land of winter sports, one of the most structured and strong summer sports. Reviewing as many years of development is not easy, but the ceremony, led by masterful Julia Furdea, Miss Austria 2014, rolled out the red carpet to everyone who helped putting Austrian judo where it is located, among the elite of world judo.

Mr. Vizer declared: "I congratulate Austrian Judo Federation to its 70 years anniversary and wish Dr. Hans-Paul Kutschera and the whole team of Austrian Judo Federation many more successful years. I am convinced that the strong and reliable partnership of AJF and IJF will continue in the future and both federations will contribute to further development of judo all over the world." 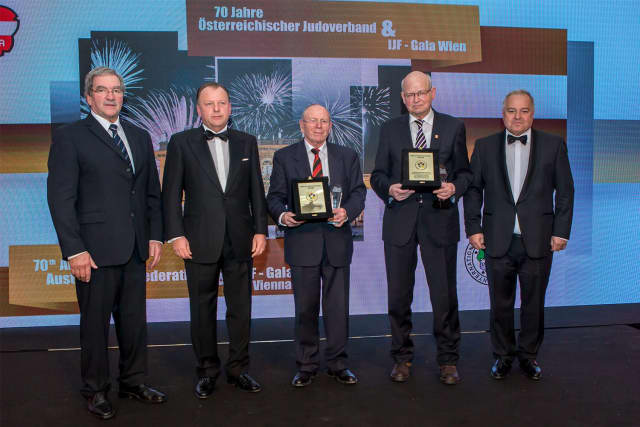 Dr. Kutschera, who has been the President for 14 years of a federation that started with 100 members 70 years ago and today counts more than 25,000 judoka, said: "It is a pleasure to have all successful athletes, coaches and members of Austrian Judo Federation together with delegates and guests of International Judo Federation gathered in Vienna. I want to thank Mr. Marius Vizer for the partnership and friendship and I look forward to a bright future of Judo in Austria, Europe and the world."

To illustrate the 70 years of judo history, the AJF and IJF had produced video clips that were presented to the guests. The Austrian video underlined all aspects of judo in Austria: from school programs, recreational sports to elite level, whereas the IJF clip showed in an artistic way what judo has become today in the international scene, including several emblematic Austrian champions.

Throughout the evening, awards were presented to many personalities who helped developing judo in Austria. The first to step on the stage were two former Presidents of the national federation: Franz Ortner and Franz Haugeneder who were warmly welcomed. 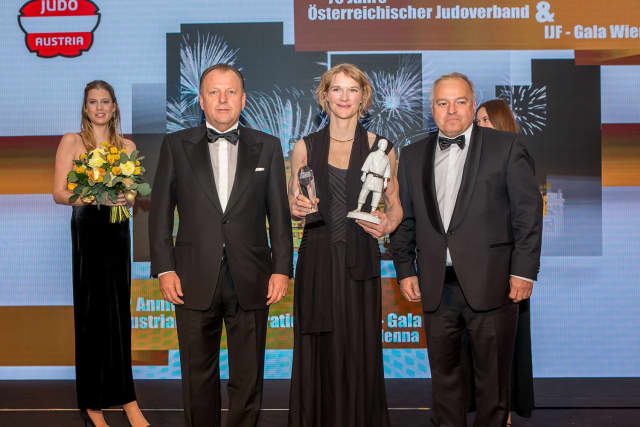 Above: Sabrina Filzmoser with President Vizer and President Kutschera

It was then the turn of the coaches to be put in the spotlight. "Without tireless dedication, commitment of volunteer-coaches, partly and full-time coaches, sport is not possible", explained the presenter. Coaches stand behind their athletes and less often in the spotlight. Therefor two outstanding coaches who plaine an important role in the country were awarded. GEORGE KERR (who couldn't be present due to the weather conditions in Scotland, where he lives) and ERNST RASER.

After the coaches, the athletes, who are the core of the sport, were honored: Edith Hrovath, Josef "Pepi" Reiter and Walter Hanl were invited on stage, just before internationally recognized singer, Marcel Pavel, offered his repertoire to the audience, while the gala was moving on.

Before the end of the evening, an other important award was presented to a special athlete. Sabrina Filzmoser, who was a world number one for a long time but also a two-time world medallist and several times European Champion and who is still competing, is the perfect illustration of someone who goes beyond the "Faster, higher, stronger" motto. Sabrina has been involved for many year in helping the development of judo in Nepal and Bhutan and on the occasion of the Judo for Peace activities organized by the IJF in 2016, she joined the IJF in helping and instructing orphans. She then collected more than 250kg of equipments and she regularly goes back to Asia to follow up with the activities. 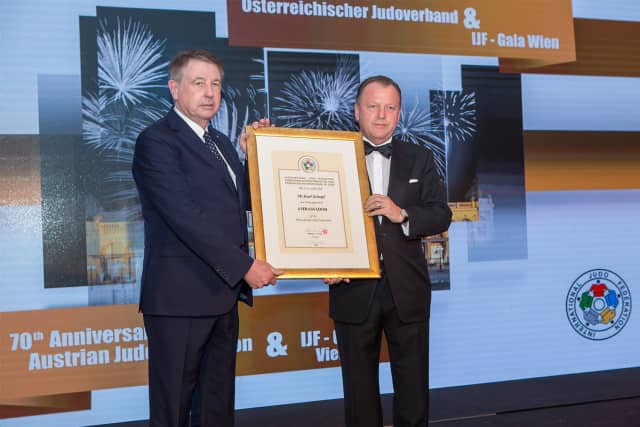 Above: Karl Schopf was awarded with the IJF Ambassador diploma

The young lady was honored for her permanent commitment to this wonderful project by IJF President, Marius Vizer, and AJF President, Hans Paul Kutschera, and she received the IJF Jigoro Kano Statue and with a Glass Trophy and Flowers.