Bekauri and Arai: A Cocktail of Youth and Experience

Written by Nicolas Messner, Jo Crowley, Pedro Lasuen on 28. Jul 2021
Share
The fifth day of competition in Tokyo had its own physiognomy with two hotly contested categories where many scenarios could take place, depending on the form of each of the protagonists. With the premature elimination of certain favourites, such as the French Margaux PINOT for women or Nikoloz SHERAZADISHVILI (ESP), who could not reach the semi-finals, opportunities opened up, in which outsiders with great potential were engulfed. 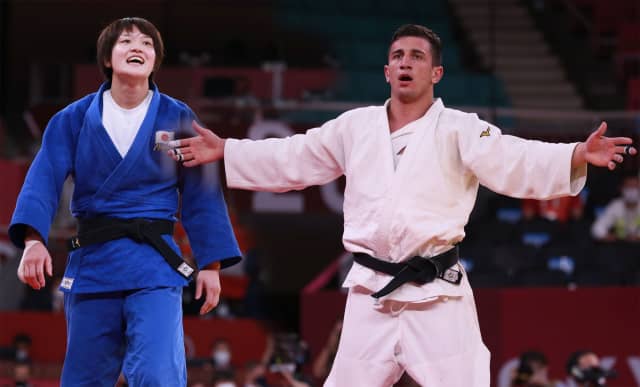 This is the case of the male winner, whom we are not entirely surprised to find at such a level. We knew his potential since his world junior title two years ago but from there to transforming this potential into real energy and the ability to win against much more experienced athletes is a big step, which Lasha took with a lot of enthusiasm.

If it is the youth and enthusiasm that wins in the men’s category, it is the experience of Arai Chizuru, double world champion, that makes the difference in the women’s. It was not flamboyant, but effective when needed and above all it allows the host country to win a sixth individual gold medal, while there are still two days of competition remaining before the mixed team tournament.

She must have been exhausted by her never-ending semi-final, but the already two-time world champion from Japan, ARAI Chizuru, today became the sixth gold medallist for the host country, on the occasion of the Tokyo 2020 Olympic Games. She needed just a single ko-soto-gake to win the title, while Michaela POLLERES (AUT) won silver. 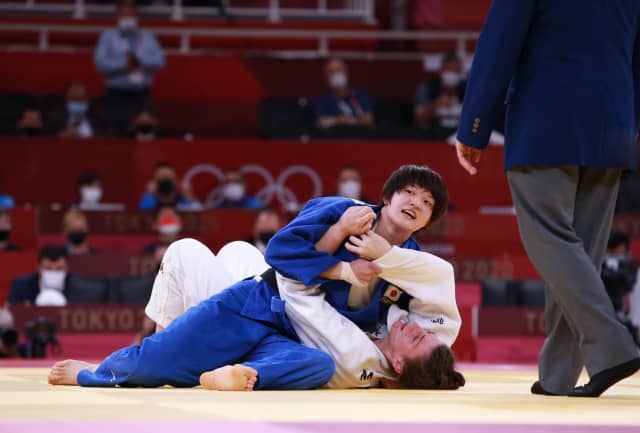 Arai Chizuru said, "This venue does not inspire me because I lost in the prelims at the 2019 Worlds but even if the last 2 years were hard for me I believed in myself and I was proud to come back. I focused on doing my best and it worked. In the semis I strangled my opponent with just 3 fingers!"

Michaela POLLERES said, "I was a little bit nervous this morning and I had tough fights all day long. But I was feeling better and better after every round. Now I have the silver medal and I feel amazing." 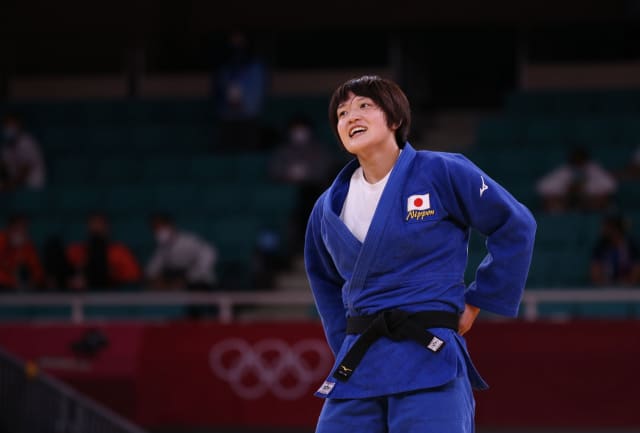 Against all odds, the winner of the first bronze medal match was Madina TAIMAZOVA (ROC), who had an incredibly long semi-final, but who still had enough energy left to score a waza-ari and to win the first ROC medal in Tokyo and the first Olympic medal of her young career. In the second bronze medal contest, another long golden score was necessary to designate the winner as Sanne VAN DIJKE (NED), who scored a beautiful ippon with a standard uki-goshi. 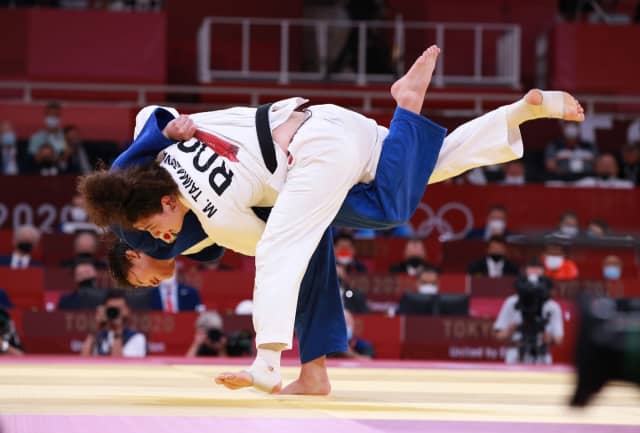 The battle between Kim POLLING and Sanne VAN DIJKE raged for months in the Netherlands. Who of the two would get her ticket to the Games? It was not until World Championships Hungary 2021, in June, that the answer was decided. So it was finally Sanne VAN DIJKE, world bronze medalist, who flew to Japan in mid-July, leaving the winner of the 2019 World Judo Masters at home.

Visibly focused, fully motivated, the Dutchwoman qualified for the semi-final by eliminating Gulnoza MATNIYAZOVA (UZB) and the Italian Alice BELLANDI. Logic may have placed the recent world champion Barbara Matic (CRO) in her semi-final, but she was eliminated by the Austrian Michaela POLLERES, clearly very fit and enjoying being in the wake of the beautiful bronze medal from her teammate yesterday in the -81kg category, Shamil BORCHASHVILI. 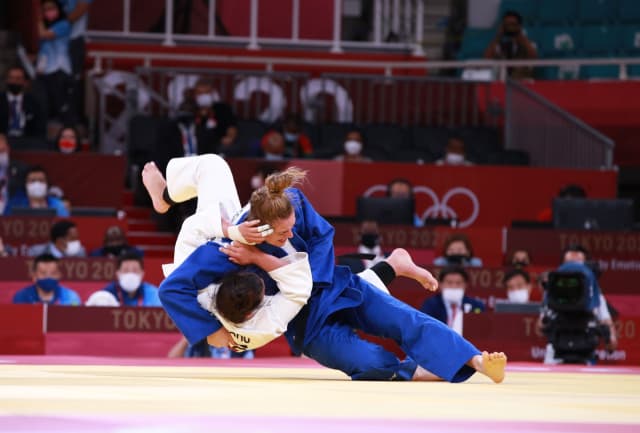 With a waza-ari scored from a sumi-gaeshi, POLLERES secured her place in the final, confirming the Yvonne Bönisch effect. Olympic champion in 2004, the German-born coach, after having served in Israel, was appointed as the head coach of Austria at the end of 2020. Within a few months she already imposed her style and the two medallists of the competition so far are the proof of that.

In the second semi-final we found the inevitable Japanese fighter, ARAI Chizuru, already twice world champion, but never classified during the Olympic Games. The representative of the Russian Olympic Committee, Madina TAIMAZOVA, was in a position to finally offer a medal to her delegation in judo, where up to now, no medal has been won by ROC athletes at the Budokan. Throughout the morning session TAIMAZOVA literally moved everything that was in her path, including Maria BERNABEU (ESP), Maria PORTELA (BRA) and Elisavet TELTSIDOU (GRE), who, in the first round sent one of the main contenders for the title, Margaux PINOT (FRA) back to the locker room.

We witnessed one of the longest contests of the tournament, as it took 12:41 of golden score for ARAI Chizuru to eventually score ippon with a shime-waza technique. More than 16 minutes is extremely long and it was mainly due to the incredible flexibility of Madina TAIMAZOVA, who escaped from many throwing attempts and floor work waged at her by the Japanese, by twisting her body in all directions. The strangulation seemed to be the very last option available. The Japanese judoka didn't miss the chance to enter the final and potentially add one more gold to the already impressive Japanese collection but first she had to deal with recovering from such a long bout.

The Italian team may have expected a better party at these Tokyo Games, or at least hoped for it. Yet the competition is tough and despite everything, two medals have already taken refuge around the transalpine athletes' necks. A new opportunity presented itself to them with the presence of Alice BELLANDI in the repechage today. She faced the reigning world champion though, the Croatian Barbara Matic, a little under the level she showed in Budapest a few weeks ago. Once again it was not an easy match for the world champion and she had to wait for the golden score period to execute a perfect o-uchi-gari for ippon, allowing entry the bronze medal contest.

Winner of the Tashkent Grand Prix in 2019, Elisavet TELTSIDOU (GRE) faced the 2017 Junior World Champion Giovanna SCOCCIMARRO (GER) to enter the bronze medal contest. It took a long golden score period again for the German to score ippon with a koshi-waza technique. 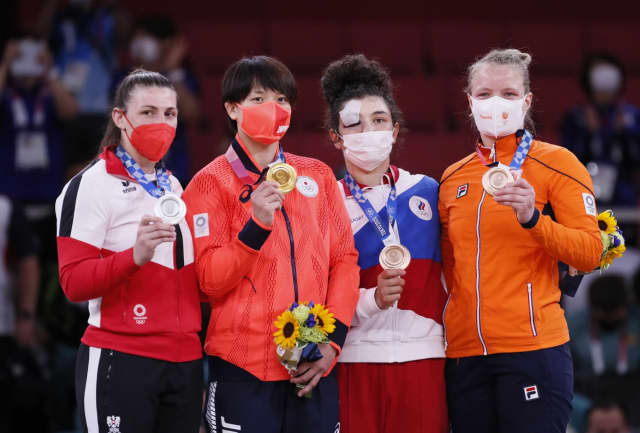 This was definitely one of the most awaited matches of the final block and it started immediately with a fast rhythm, with a mix of reversed seoi-nage from TRIPPEL and low koshi-guruma from BEKAURI. When Lasha BEKAURI scored a waza-ari, TRIPPEL knew that it would be difficult to come back. He tried, but the young Georgian managed to keep his distance from the German's attacks and at the end of a new day of judo, became the new Olympic champion of the men's -90kg weight division; a new name on top of the world for the next three years. 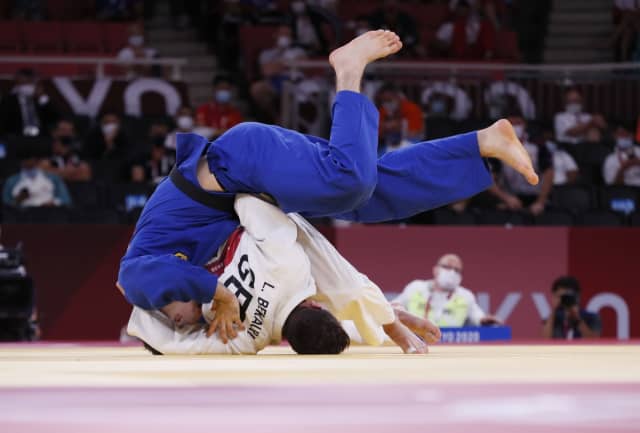 Lasha BEKAURI said, "Zurab Kakhabrishvili is the best doctor in the world because a month ago in Budapest I badly injured my shoulder and we were scared about Tokyo. Thanks to him today I felt great and I was able to produce my best judo. Now im Olympic champion. Life is good."

Eduard TRIPPEL said, "You know I know I can throw but in order to do that I have to be relaxed and enjoy what I’m doing. Everyone was nervous this morning. Not me! I took it as a normal competition and so I enjoyed it a lot. That is why I did good judo and the silver medal is the result of all of that." 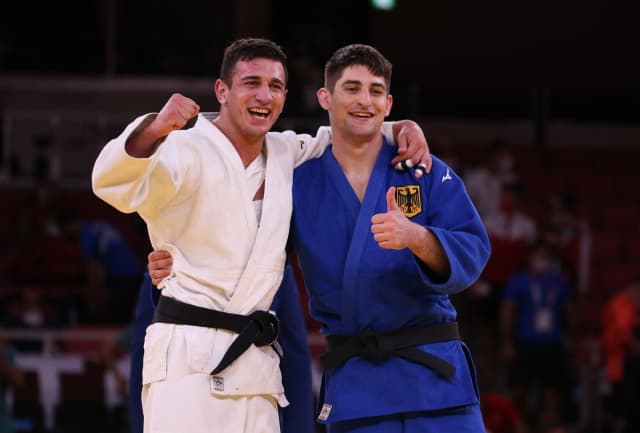 He knew it as soon as he landed on his back that the competition was over and that despite all efforts he won't go back home with the precious medal. Mihael ZGANK (TUR) was really disappointed. On the other side, Davlat BOBONOV (UZB) knew that he had performed the best move possible, with a really low tai-otoshi, sending a wave of happiness through the delegation stands, where the whole Uzbek team was waiting for their first medal. The day was long, but suddenly with moments like that it looked infinitely shorter.

In the second bronze medal contest, with his left-handed kumi-kata, Mikhail IGOLNIKOV (ROC) bothered many of his opponents during the day and TOTH (HUN) was no exception. The Hungarian struggled throughout normal and extra-time, but slowly he built something and in a last blast of energy scored a waza-ari to win a well deserved medal. 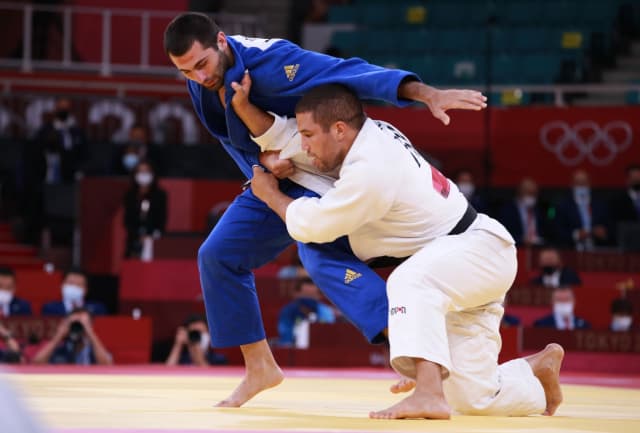 In the -90kg category, we attended two competitions. In the first one, the favourites that were Mikhail IGOLNIKOV (ROC) and Lasha BEKAURI (GEO) got away from the rest to enter the semi-final and in the other one the underdogs such as Mihael ZGANK (TUR) and Eduard TRIPPEL (GER) survived an awesome elimination game. The reigning world champion, Nikoloz SHERAZADISHVILI (ESP) was strangled in the quarter-finals, Davlat BOBONOV (UZB) could not resist Lasha BEKAURI, Noel VAN T END (NED) and Ivan Felipe SILVA MORALES (CUB) succumbed to the energy of Mihael ZGANK (TUR), while TOTH Krisztian (HUN) and Nemanja MAJDOV (SRB) could not reach the last four either. 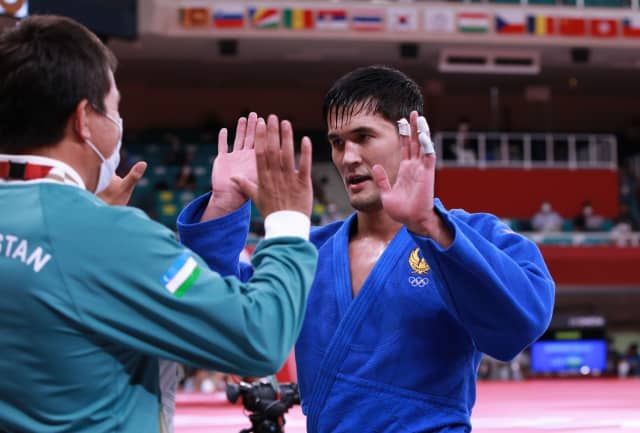 The first semi-final therefore pitted two favourites, Mikhail IGOLNIKOV (ROC), still able to win a medal for the ROC athletes and Lasha BEKAURI (GEO), clearly well recovered from his shoulder injury obtained in Budapest during the Mixed Team World Championships. If we had doubts about that injury, we have the answer, it's all good. BEKAURI qualified for the final, with a single waza-ari that sent IGOLNIKOV in the bronze medal match. Only 21 year old, BEKAURI was a junior world champion and now in the position to win the Olympic title.

The other semi-final saw Mihael ZGANK (TUR) and Eduard TRIPPEL (GER) face off, with the guarantee that one of the great leaders of the morning would still be present in the final and this was Eduard TRIPPEL, who after an other tensed and long golden score period finally scored a waza-ari that was uncertain until it was clearly confirmed by the video.

If several favourites were eliminated during the morning session, we found several of them in the repechage too, including three of the medallists of the last World Championships Hungary 2021.

Double world champion, Nikoloz SHERAZADISHVILI (ESP) had a difficult start with several golden score periods and finally a defeat against the often dangerous opponents, who he admits he has difficulty competing against, Mikhail IGOLNIKOV (ROC). To keep hoping for a medal, the Spaniard faced Davlat BOBONOV (UZB), who was one of the last chances of Uzbekistan to reach the podium. It was written that it was not SHERAZADISHVILI's day as he had to bow out to BOBONOV for a spot in the bronze medal contest.

In the second repechage match, 2019 world champion and winner of the World Judo Masters this season, Noel VAN T END met TOTH Krisztian (HUN), another world medallist, and with a shoulder movement banked a waza-ari that offered him the possibility to win bronze.

It must be noted that, after days of Japanese domination, for the first time since the beginning of the Olympic tournament, there was no Japanese athlete present in the final block for men, since MUKAI Shoichiro was eliminated by TOTH Krisztian in the early rounds. 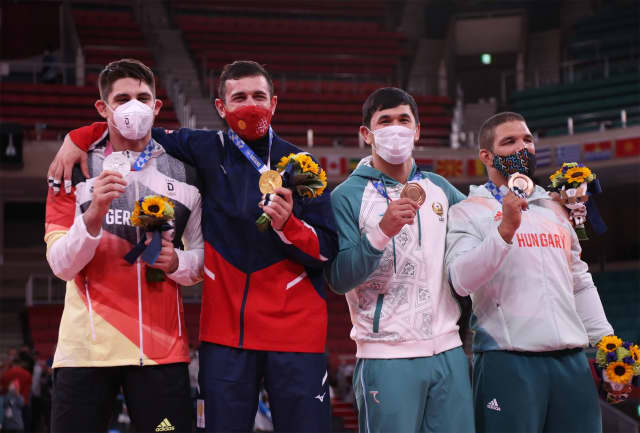