Written by Mark Pickering on 19. Jun 2017
Share
Five-star Brazil finish out of sight in Cancun with 71 days to go until the Worlds

The maiden Cancun Grand Prix saw the emergence of Pan American judoka once again on Sunday while Olympic and world medallists experienced mixed fortunes in a dramatic day of IJF World Judo Tour action as the heavyweights closed out the competition at the PoliForum Benito Juarez.

Brazil finished top of the medal table with five gold medals, two silver and one bronze ahead of Spain and Israel who won three gold medals and two gold medals respectively. Despite the majority of Brazil’s first choice judoka just completing a training camp in Tokyo, their 17-strong team in Cancun was loaded with Olympic and world medallists as the last Olympic Games hosts possess one of the strongest and deepest talent pools in the sport.

Mexico’s first Grand Prix concluded with five categories on the final day as the men’s -90kg, -100kg and +100kg categories were joined in action by the women’s -78kg and +78kg categories. 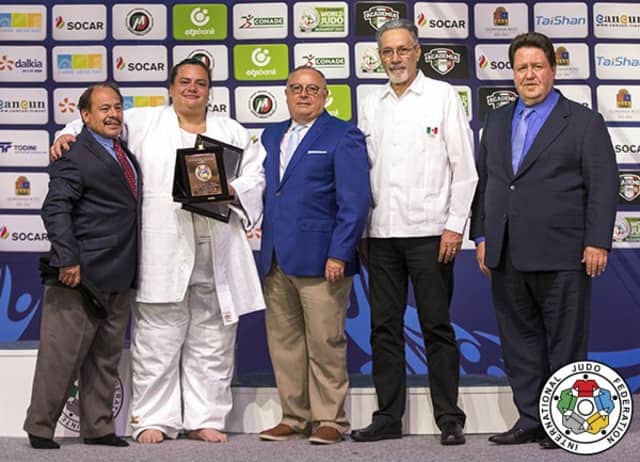 The three-time Olympian, who won the Pan American Games in 2007, became her country’s first Grand Prix medallist when she won bronze at the Havana Grand Prix last year and for years was the standard bearer for Mexican judo.

ONE MORE ROLL OF THE DICE BEFORE THE WORLD CHAMPIONSHIPS 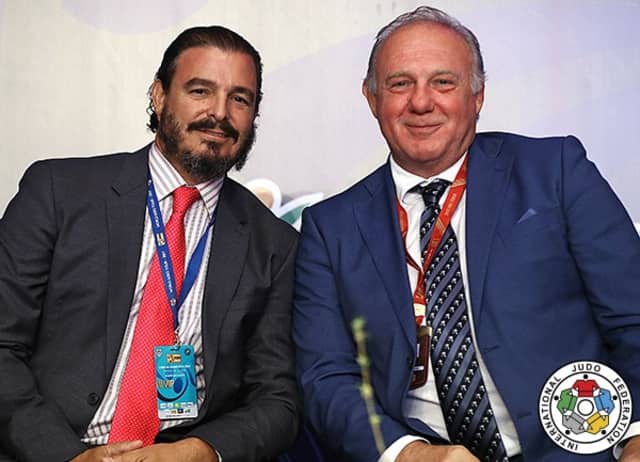 “I am very pleased with where we are at the moment in terms of our organisation and preparation for the World Championships,” said TOTH.

“We are working tirelessly as an Association every single day to ensure we do our maximum to host the best event we possibly can. I am particularly pleased by the fact that we as able to attain a sponsor in Suzuki which is a first for a sports event in Hungary of this magnitude.

“Tickets are selling very fast and we already have large groups of fans from countries such as Russia, Austria, France, Germany and Japan buying tickets in great quantities. We are even looking to open extra seating so that as many people as possible can enjoy this judo spectacle.

“I have had productive meetings here in Cancun with the IJF team, as we discuss areas such as the first organisation of the mixed team judo event on the last day, and everything has been positive.

The IJF’s final stop on the road to Budapest is in China as the first edition of the Hohhot Grand Prix in Inner Mongolia (30 June - 2 July) will be the most crucial event of the season so far as judoka chase selection, a seeded position and good form for the World Championships.

Double Olympic champion Teddy RINER (FRA), who will be aiming for a ninth world title in August, makes his return to competition in China having not competed since Rio 2016. Heavyweight king RINER is looking for a run-out before the Worlds but can expect more than a workout as he puts his seven-year unbeaten record on the line with -100kg Olympic champion Lukas KRPALEK (CZE) waiting in the wings to face the French great in Hohhot.

Japan’s number one heavyweight OJITANI Takeshi (JPN) has been on a tear as of late having won the Tokyo Grand Slam and Paris Grand Slam in succession while eclipsing his national rivals with wins at the Kodokan Cup, All Japan Championships and All Japan Openweight Championships.

-78kg: Winning return for double Olympic bronze medallist AGUIAR of Brazil
Double Olympic bronze medallist Mayra AGUIAR (BRA) made a winning return to action as she defeated double European bronze medallist Natalie POWELL (GBR) to win -78kg gold. Former world champion AGUIAR was making her first appearance on the IJF World Judo Tour since her home Olympics but it did not show as she caught Welsh judoka POWELL with a textbook sasae-tsurikomi-ashi for ippon. AGUIAR will be delighted to get a win under her belt before the Worlds and could well renew acquaintances with POWELL, whose silver moved her to 15 Grand Prix medals, in the latter stages in Budapest as both judoka could make a medal tilt on the grandest stage of all on the IJF circuit. 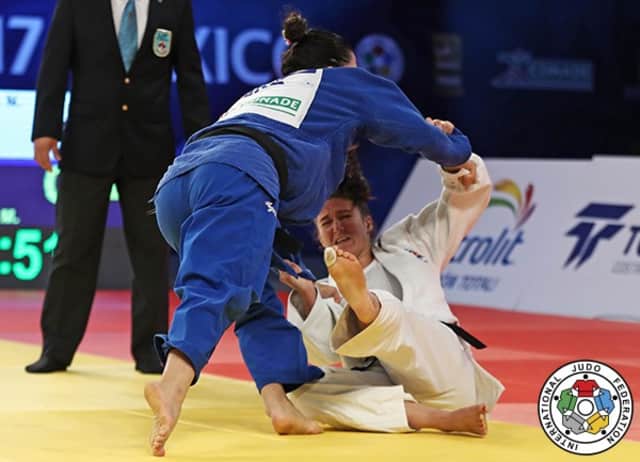 In the first semi-final POWELL bested 19-year-old IJF World Judo Tour debutant Karen LEON (IJF) by ippon after holding the Pan American judoka for 20 seconds with a kesa-gatame for a routine win. 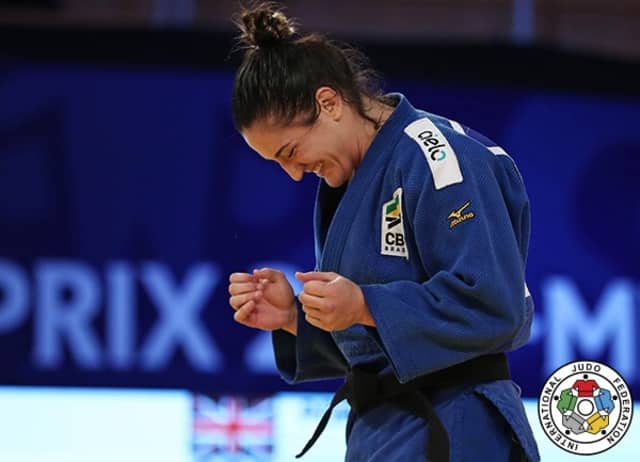 The first bronze medal was won by ANTOMARCHI as Pan American Championships bronze medallist Liliana CARDENAS (MEX) was ruled out of the contest through injury. ANTOMARCHI joined an IJF World Judo Tour medal podium for the first time and will hope that his this result is the start of a new chapter in her career having placed fifth at the Worlds and Grand Slams in previous Olympic cycles.

The second bronze medal contest was won by LEON who held down Chile Pan American Open silver medallist Jacqueline USNAYO (CHI) with a kesa-gatame for ippon. Teenager LEON completed a successful debut with a powerful display and will be a judoka to watch in the Tokyo 2020 Olympic cycle. The youngster escaped a tate-shiho-gatame to turn her Chilean rival into a pin of her own in an excellent ne-waza exchange. 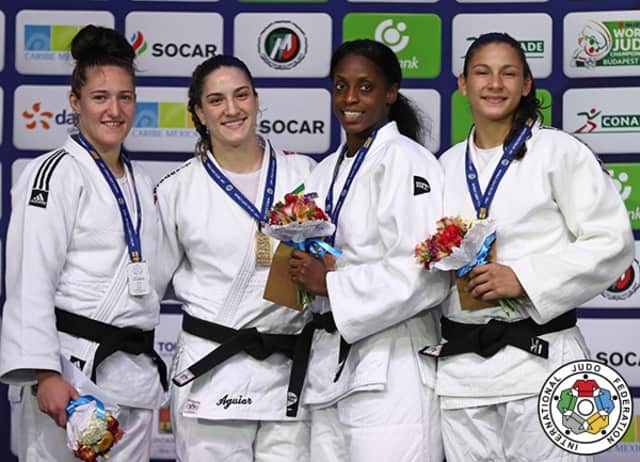 +78kg: Croatia’s SUTALO pitches a perfect record to deny a home victory
Zagreb Grand Prix bronze medallist Ivana SUTALO (CRO) topped an IJF medal podium for the first time with a win over Pan American Championships silver medallist Melanie BOLANOS (MEX). SUTALO, 22, produced three ippons in as many contests to take the -78kg title as BOLANOS had to settle for silver after being thrown for a waza-ari and held down for 20 seconds. 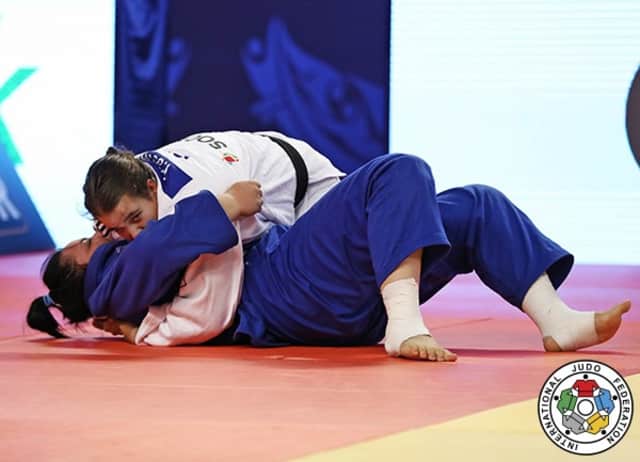 In the first semi-final Pan American Championships bronze medallist Nina CUTRO-KELLY (USA) fell to SUTALO via a tate-shiho-gatame as the American had no answer to the power of her European opponent. In the second semi-final BOLANOS held down Lima Pan American Open winner Rochele NUNES (BRA) and the latter tapped out to the satisfaction of the home crowd.

The first bronze medal was won by former Moscow Grand Slam bronze medallist Sarah ADLINGTON (GBR) as NUNES could not compete due to an injury. It was not the fashion ADLINGTON desired but the result is a great lift for the Scottish judoka who has resurfaced after a year away from the IJF circuit. NUNES pulled out having broken a bone in her hand.

The second bronze medal was won by Rio 2016 Olympic bronze medallist Anamari VELENSEK (SLO) who bounced back from her semi-final slip to tap out CUTRO-KELLY. VELENSEK’s heavyweight debut yielded a IJF medal podium at the first time of asking having started over with no World Ranking List points and will be a dangerous judoka in Hungary from an unseeded position. 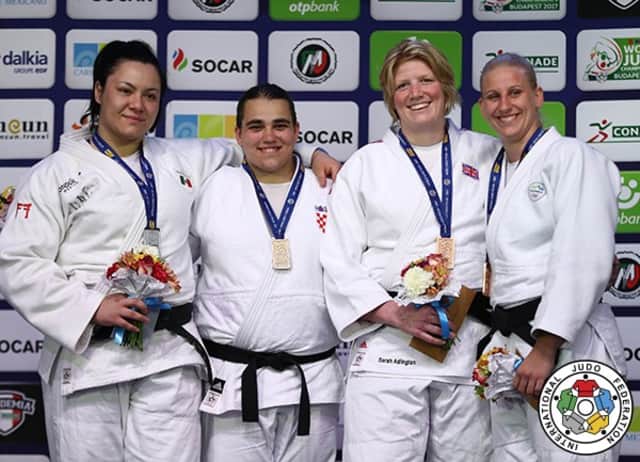 -90kg: First Grand Prix crown for Spain’s top seed SHERAZADISHVILI
Former Tbilisi Grand Prix bronze medallist Nikoloz SHERAZADISHVILI (ESP) recorded the best result of his young career as he defeated Bucharest European Open winner Tural SAFGULIYEV (AZE) in the -90kg final to claim his first Grand Prix gold medal. Abu Dhabi Grand Slam bronze medallist SAFGULIYEV, 26, led by a waza-ari before Tbilisi-born SHERAZADISHVILI pulled level with a waza-ari score of his own on the edge of the area and pinned down the Azeri with a modified yoko-shiho-gatame for ippon. 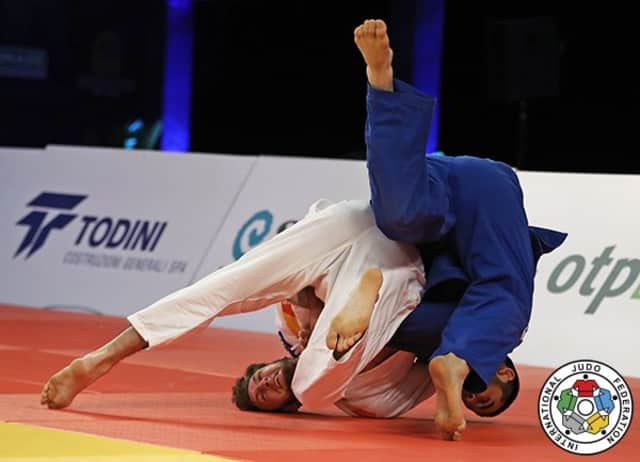 In the first semi-final SHERAZADISHVILI defeated Pan American Championships winner Ivan Felipe SILVA MORALES (CUB) by a waza-ari score. In the second semi-final Miami Grand Prix bronze medallist Colton BROWN (USA) lost out to SAFGULIYEV by a waza-ari score after a nervy four minutes as both men tentatively tried to plot a way into the final. 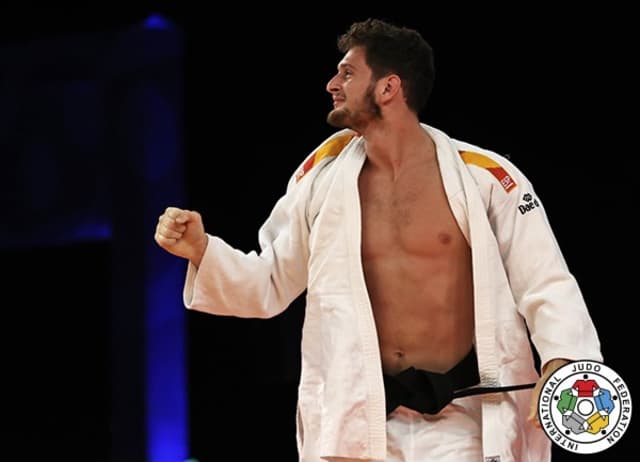 The first bronze medal was awarded to Abu Dhabi Grand Slam bronze medallist Nemanja MAJDOV (SRB) who beat BROWN by two waza-ari scores. The 20-year-old Serbian judoka won his first Grand Prix medal by opening the scoring with a waza-ari from a uchi-mata-sukashi and added a second from a modified kata-guruma as BROWN failed to find a way back into the contest.

The second bronze medal went to SILVA MORALES after Rome European Open bronze medallist Zachary BURT (CAN) was disqualified after a minute of golden score following his third shido. SILVA MORALES was not at his best today but earned his first IJF medal at this weight which he moved to after the Olympics and is capable of anything at the Worlds in August. 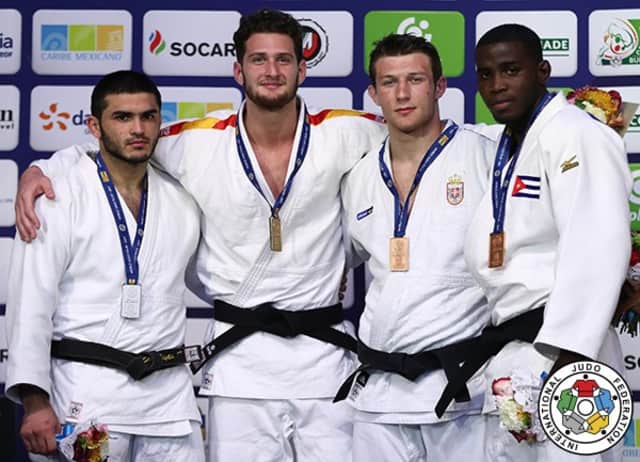 -100kg: Pole position for Israel’s persevering PALTCHIK
Bucharest European Open bronze medallist Peter PALTCHIK (ISR) won -100kg gold for Israel as a new Grand Prix winner was crowned on Sunday. World number 27 PALTCHIK evaded a trademark uchi-mata from world number 28 FLETCHER before throwing with a drop seoi-nage with 14 seconds left on the clock. Both judoka gave a great account of themselves all day long as they made a mockery of their rankings to impress and should both be called upon for the World Championships in August. 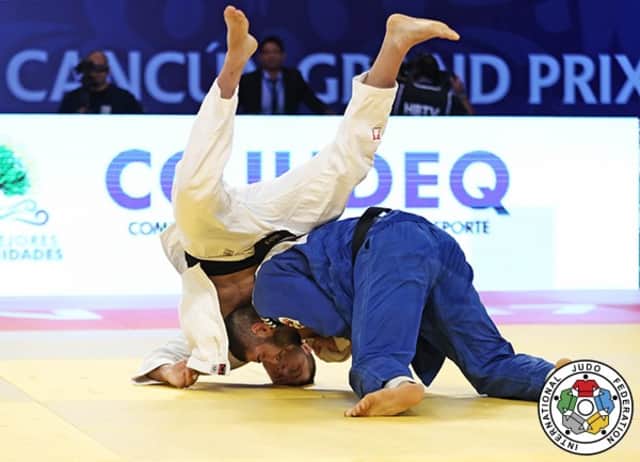 In the first semi-final FLETCHER submitted former world silver medallist Jose ARMENTEROS (CUB) having thrown the Cuban judoka with a ura-nage for a waza-ari. In the second semi-final PALTCHIK catapulted Abu Dhabi Grand Slam silver medallist Luciano CORREA (BRA) through the air with a majestic sode-tsurikomi-goshi which ended the opening session on Sunday in style. 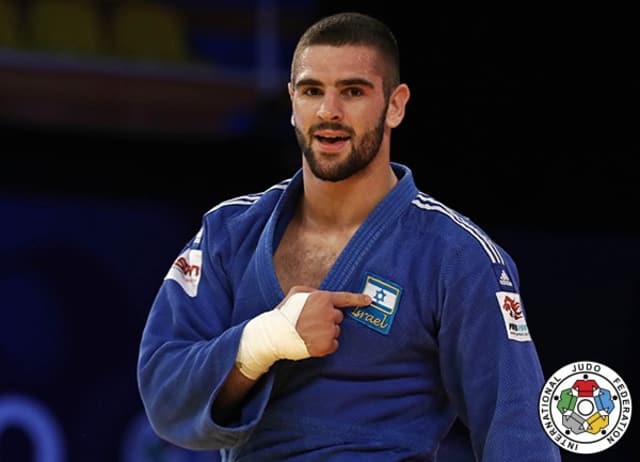 The first bronze medal was won by Pan American Championships silver medallist Andy GRANDA (CUB) with a neat foot sweep which brought down CORREA for ippon. CORREA is a good scalp and name on the resume of the Cuban judoka who won his first Grand Prix hardware.

The second bronze medal was won by Abu Dhabi Grand Slam bronze medallist Philip AWITI-ALCARAZ (GBR) as ARMENTEROS could not take part due to an arm injury sustained in his semi-final loss at the hands of FLETCHER. AWITI-ALCARAZ, who started judo with his siblings at Enfield Judo Club, has made great strides in the post-Olympic phase and could be in contention for Worlds selection after another performance that showed off his vast potential. 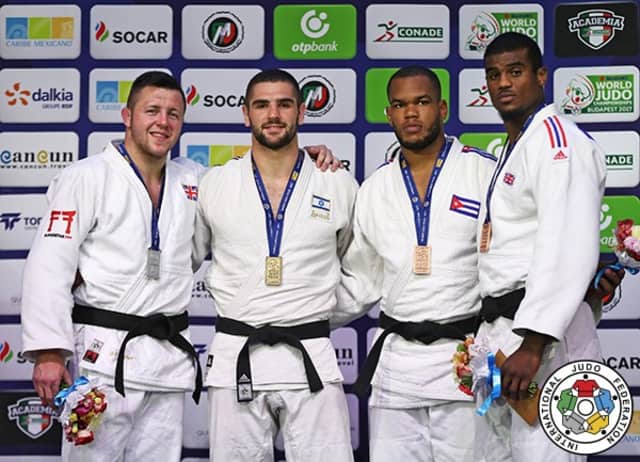 +100kg:  Brazil’s man-mountain MOURA becomes the new world number one
Ekaterinburg Grand Slam winner David MOURA (BRA) captured the world number one position for the first time in his career by triumphing in Mexico in the very last contest of the Cancun Grand Prix 2017. MOURA now has back-to-back IJF World Judo Tour victories for the first time in his career and will take some stopping at the World Championships. The 29-year-old, who for much of his career had played second fiddle to double Olympic bronze medallist Rafael SILVA (BRA), has seven consecutive contest wins from his last two events. The Brazilian outworked the laboured Pan American Championships winner Alex GARCIA MENDOZA (CUB) who received his third penalty for undoing his judogi with 14 seconds left in men’s heavyweight final. 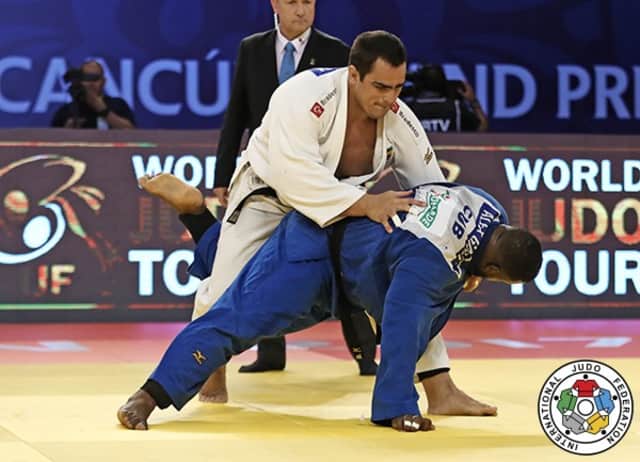 In the first semi-final MOURA defeated world number 127 Arash SOOFIANI (USA) by ippon after 18 seconds. The Brazilian threw with a yoko-tomoe-nage, a rare sight in the heavyweight men’s judo, and then applied the juji-gatame in a professional performance. In the second semi-final GARCIA MENDOZA powered past 18-year-old Lima Pan American Open bronze medallist Francisco SOLIS (CHI) by holding down the young Chilean judoka with a kuzure-kesa-gatame after controlling the scoreboard with two waza-ari scores.

The one and only bronze medal +100kg contest was won by teenager SOLIS as SOOFIANI received his third shido for going out in a tentative affair between two newcomers to the IJF stage. 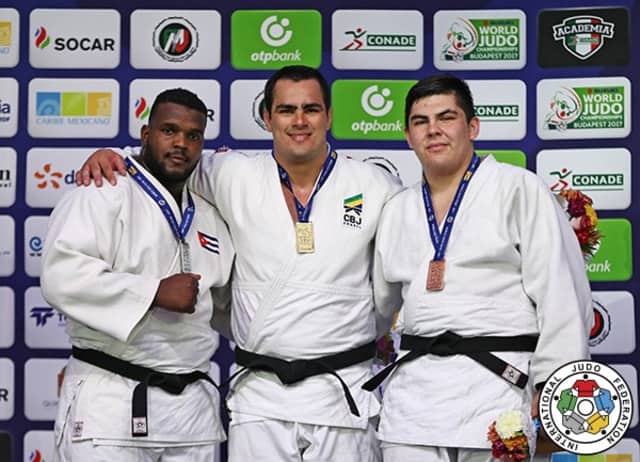