The International Judo Federation’s first visit to Cancun served up a dynamic second day of World Judo Tour competition as it was the turn of the middleweights to compete for Grand Prix honours.

Mexico’s first Grand Prix started with a day that will live long in the memory for the home team and day two had ippon judo in abundance as the women’s -63kg and -70kg categories and the men’s -73kg and -81kg categories were contested at the PoliForum Benito Juarez with 69 judoka (40 men and 29 women) going for gold.

The hosts’ phenomenal opening day was always going to be a hard act to follow but still they were much more than just being competitive as the results from day one still reverberated around the country on mainstream channels. 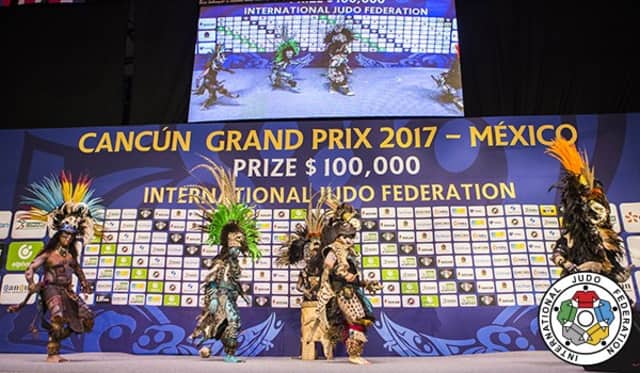 The opening ceremony was held before the final block on day two as Mr. Marius VIZER, IJF President, made the opening speech on the stage.

“Dear organisers, dear guests, dear judoka, I am very proud that judo mixed team event will be in the next Olympics at Tokyo 2020. Thank you to all of you for your contributions towards this achievement on behalf of the judo family.

“I want to wish all participants a successful event, I want to thank all delegations, all nation federations, coaches, athletes and referees for the their participation in this Grand Prix, I want to thank the Government of Mexico, the local government, the Ministry of Tourism, the city of Cancun, the Mexican Judo Federation and all of judo family for contribution to this Grand Prix. Thank you very much, I wish you a successful Grand Prix and to enjoy Cancun.” 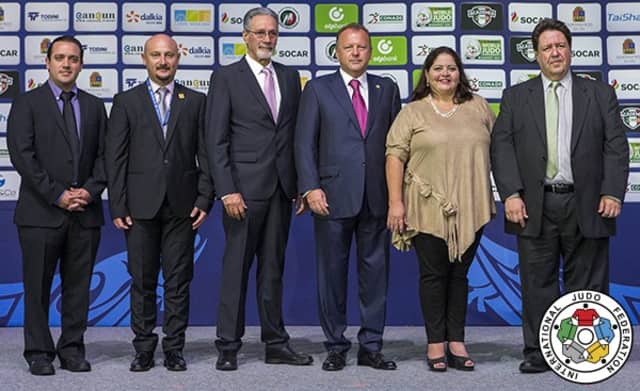 Mr. Valentin YANES GONZALEZ, Deputy Director of Quality For Sport of Mexico's National Commission for Physical Culture and Sport (CONADE), said: “Good evening everyone, I would like to say thank you on behalf of Ministry of Sport of Mexico for letting us be the host of this event, this fantastic IJF World Judo Tour event in Cancun. We would like to say thank you to the IJF President Mr. Marius VIZER and to all of the judo family. Thank you also to Mr. Manuel LARRANAGA, Pan American Confederation and Mexican Judo Federation President.

“We feel so happy to be hosting this event with 36 nations represented at this first edition of the Cancun Grand Prix. It gives us great pleasure to have such a high level of competitors who I thank for making this event so special. Congratulations to everyone and welcome to Cancun, welcome to Mexico.” 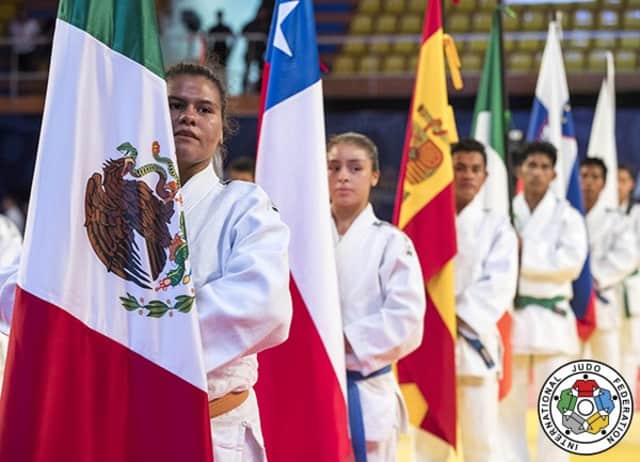 Ms. Marisol VANEGAS PEREZ, Secretary of Tourism of Quintana Roo, said: “Competitors, coaches, media, all officials, welcome to Cancun for this Grand Prix event. It is an honour for us to host this Grand Prix here in Cancun which has brought competitors to Mexico from all around the world.

“Cancun is one of the most important tourist destinations and is a place where all your dreams can come true. Quintana Roo offers a tremendous location to all visitors and we are happy to see the judo family here enjoying Cancun. Congratulations everyone and I wish you a wonderful tournament.”

The maiden Cancun Grand Prix will welcome the heavyweights to the tatami on Sunday for the final day of competition with double Olympic -78kg bronze medallist Mayra AGUIAR (BRA) and world heavyweight number two David MOURA (BRA) among those to look out for along with Cuba’s Pan American Championships winner Ivan Felipe SILVA MORALES (CUB) at -90kg and his teammate and former world silver medallist Jose ARMENTEROS (CUB) at -100kg. 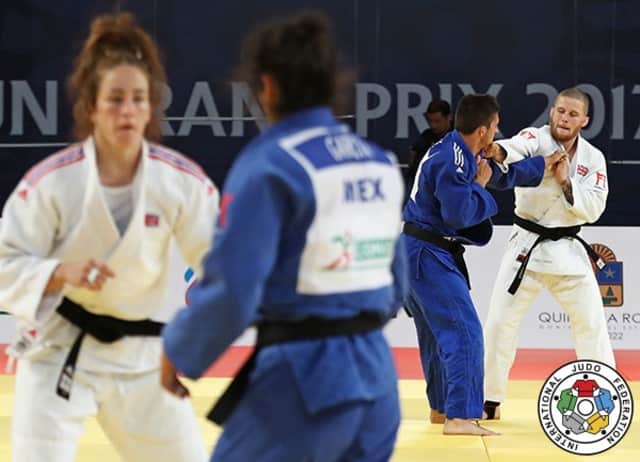 -63kg: Brazil’s QUADROS starts her fourth Olympic cycle with Grand Prix gold
Beijing 2008 Olympic bronze medallist Ketleyn QUADROS (BRA) won her third Grand Prix gold medal at the expense of Ekaterinburg Grand Slam bronze medallist Amy LIVESEY (GBR). QUADROS, 29, who won both of her Grand Prix gold medals in 2013, has a wealth of experience at the highest level while world number 14 LIVESEY, who won bronze on the Grand Prix stage in Budapest last year, has made a confident start to her senior career over the last year. QUADROS seized the initiative and threw her British opponent with a drop seoi-nage after two minutes for ippon to prolong her international career for Brazil with future call-ups now a certainty. 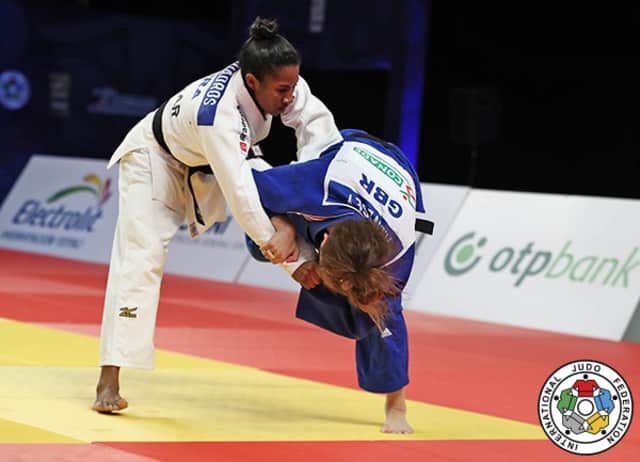 In the first semi-final Baku Grand Slam silver medallist Andreja LESKI (SLO) fell to QUADROS and a waza-ari score from a de-ashi-barai as the Brazilian guaranteed her seventh Grand Prix career medal. In the second semi-final LIVESEY submitted former Junior World Championships bronze medallist Vivian HERRMANN (GER) with a koshi-jime strangle having led by a waza-ari from an ouchi-gari.

The first bronze medal was won by Antalya Grand Prix bronze medallist Lubjana PIOVESANA (GBR) who submitted 23-year-old German judoka HERRMANN with a koshi-jime strangle after 42 seconds. PIOVESANA, 20, showed poise and precision to sink in the strange with razor sharp ne-waza to open the final block.

The second bronze medal was won by Pan American Championships bronze medallist Anriquelis BARRIOS (IJF) against LESKI. BARRIOS, who was bidding to win her first Grand Prix medal, had the height advantage while LESKI was more familiar with the rigours of the IJF World Judo Tour which made for a interesting contest. The 23-year-old Pan American judoka defeated the top seed for improve on her seventh-place from the Almaty Grand Prix last year with bronze from a waza-ari score in the closing seconds. 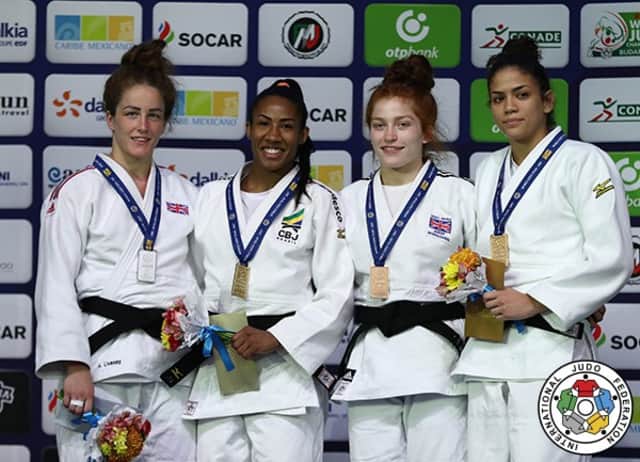 -70kg: World silver medallist BERNABEU conquers familiar foe for Spanish gold
World silver medallist Maria BERNABEU (ESP) denied Rio 2016 Olympic bronze medallist Sally CONWAY (GBR) a perfect return to IJF duty as the Spanish star took the -70kg final and her country’s second gold medal in Cancun. CONWAY, 30, who took silver on her post-Olympic return to competition at the Bucharest European Open a fortnight ago, led their head-to-head series 4-2 coming into Mexico with all four of the Briton’s wins coming in their last four meetings. Former Budapest Grand Prix winner BERNABEU, who finished fifth at the Rio 2016 Olympics, led with a waza-ari from an ashi-waza attack but the final was decided when CONWAY received her third penalty for going out of the area. Both judoka will be in the medal hunt come Budapest in August with Scotland’s CONWAY targeting her first world medal. 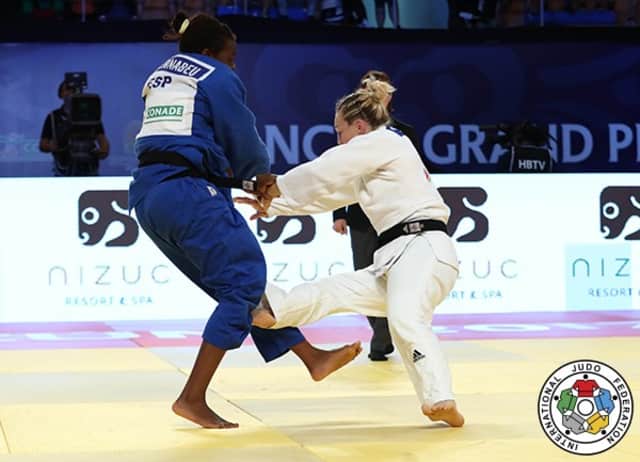 In the first semi-final Venezuela’s first world number one Elvismar RODRIGUEZ (IJF) lost out to CONWAY who threw her young opponent after 58 seconds of golden score with a sumi-gaeshi for a match-winning waza-ari score. 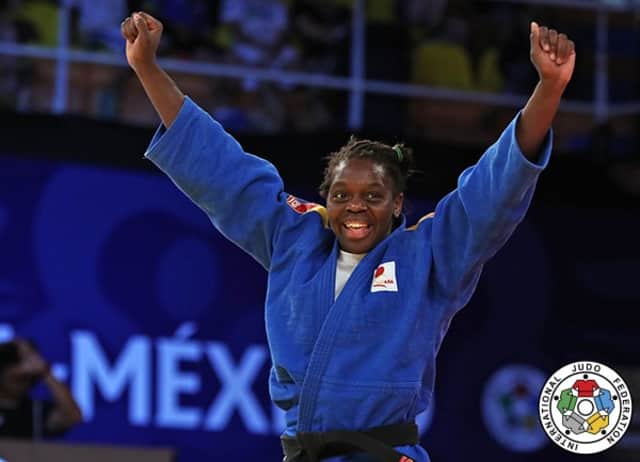 The first bronze medal was claimed by HOWELL who held down Abu Dhabi Grand Slam bronze medallist Barbara TIMO (BRA) for 20 seconds to win by by ippon. Former junior standout and London 2012 Olympian HOWELL is now enjoying the best run of her career as she has been able to stay injury free and has now won three Grand Prix medals this year.
The second bronze medal was captured by RODRIGUEZ as former Minsk European Open winner Roxane TAEYMANS (BEL) received her third and final penalty for going out of the area after 90 seconds of golden score. RODRIGUEZ looked more open and adventurous than her earlier contests and that told as TAEYMANS struggled to contain the world leader who picked up valuable World Ranking List points as she all but guaranteed herself the top billing for August’s World Championships. 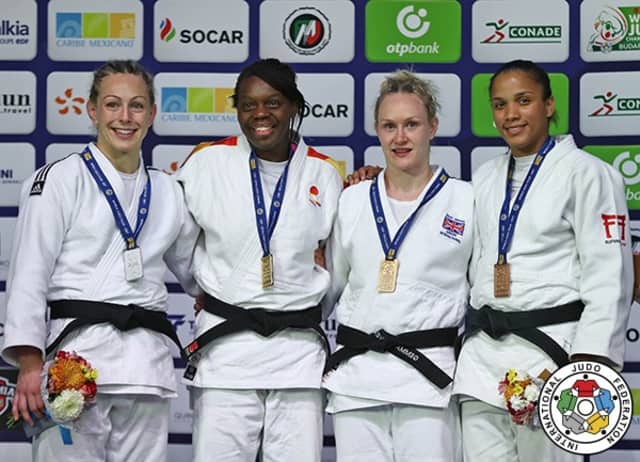 -73kg:  Brazil’s CONTINI sees off top seed to make ground on world’s top 10
Ekaterinburg Grand Slam silver medallist Marcelo CONTINI (BRA) won his first Grand Prix medal in dream fashion as he beat the top seed to clinch -73kg gold in Cancun. World number 13 CONTINI, who has gained the upper hand of teammate and Brazil’s Rio 2016 pick Alex William POMBO SILVA (who lost to BUTBUL in the second round in the morning session) avenged his compatriot’s defeat as he submitted BUTBUL – who is being tipped as the hottest commodity in Israeli judo – with a sankaku-jime. 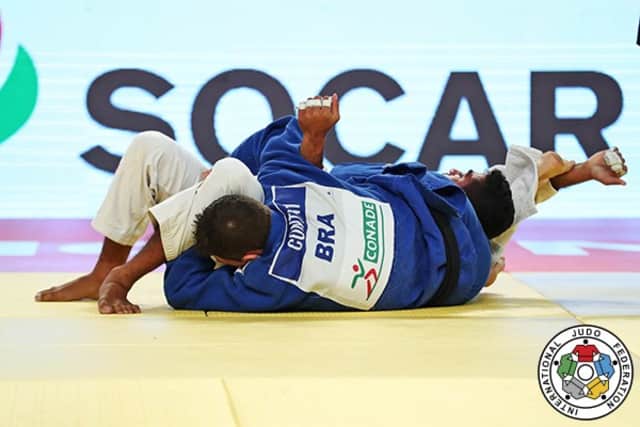 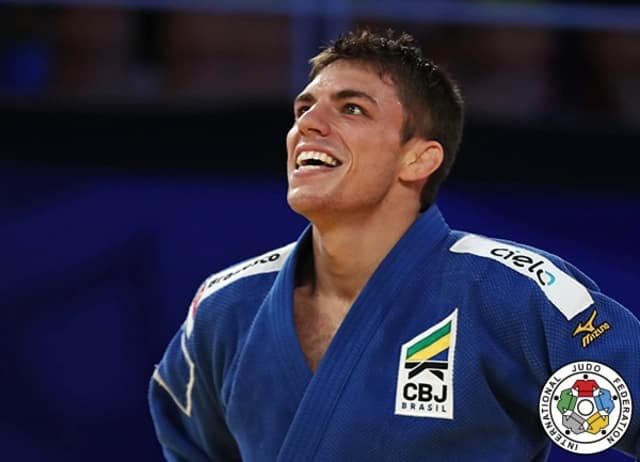 The first bronze medal contest saw Buenos Aires Pan American Open winner Alonso WONG (PER) defeat RAMIREZ with two waza-ari scores which both came from seoi-nage throws. WONG delivered his country’s second Grand Prix medal in as many days and his first with a strong outing and will now hope to become a permanent fixture on the IJF World Judo Tour.

The second bronze medal went to TURNER who defeated Pan American Championships silver medallist Eduardo ARAUJO (MEX) after two minutes of golden score in a hugely exciting contest which had the crowd out of their seats for the duration. The 21-year-old Mexican judoka was fighting for a Grand Prix medal for the first time which could also be said of his American adversary. TURNER launched ARAUJO with a stunning ippon seoi-nage after two minutes of added time for ippon and pointed up to his teammates in the crowd who jumped for joy in celebration of his first Grand Prix medal. 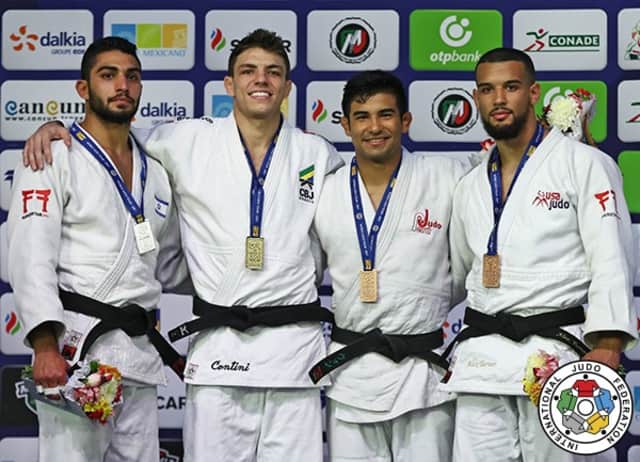 -81kg: Argentina’s leading man LUCENTI wins Grand Prix gold at 17th attempt
Pan American Championships silver medallist Emmanuel LUCENTI (ARG) won his first Grand Prix gold medal with a win over Russian Grand Slam bronze medallist Etienne BRIAND (CAN) in the -81kg final on Saturday. Two-time Olympian LUCENTI, 32, ended his five-year wait since his last IJF medal (Miami Grand Prix silver) as he always bring his best judo when competing in the Americas. The veteran, who made his Grand Prix debut in 2009, became his country’s first male Grand Prix winner by taking a first time meeting between two of Pan America’s most established -81kg judoka as he threw BRIAND with a drop seoi-nage for a waza-ari which proved decisive after four minutes. 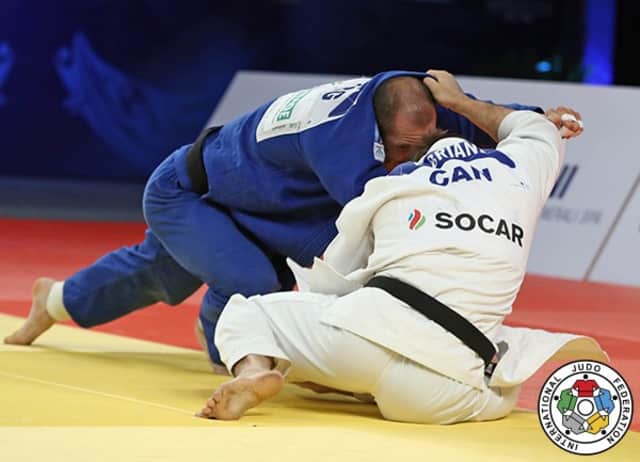 In the first semi-final BRIAND defeated Ekaterinburg Grand Slam silver medallist UNGVARI Attila (HUN) with a beautiful ippon-seoi-nage after 49 seconds of golden score. It was an emphatic ending from BRIAND who guaranteed his best finish at a Grand Prix. 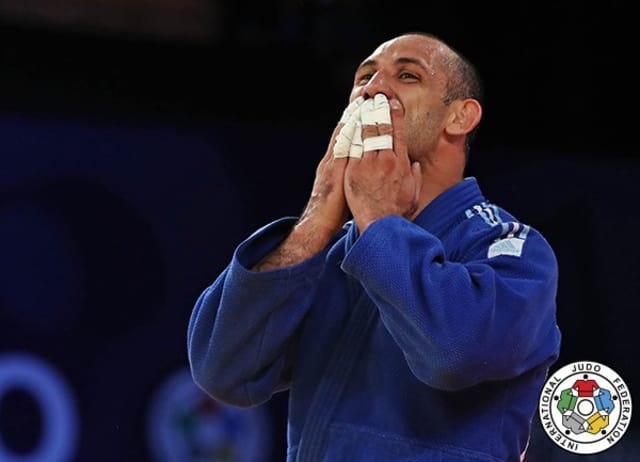 In the second semi-final LUCENTI defeated world bronze medallist Victor PENALBER (BRA) in golden score when the Brazilian received a second shido for passivity after an extra two minutes. PENALBER was the favourite in the contest between the two rival South American nations but did not expect such resistance and commitment from the Argentine who followed wins over European Games winner Sagi MUKI (ISR) and former world runner-up Srdjan MRVALJEVIC (MNE) with a dogged display against his Brazilian opponent.

The first bronze medal contest saw PENALBER emerge victorious against 21-year-old Buenos Aires Pan American Open winner Jack HATTON (USA). Two waza-ari scores were the difference after four minutes as the Brazilian threw with an osoto-gari and a reverse seoi-nage which both troubled the scoreboard.

The second bronze medal went to number one seed UNGVARI who forced former world silver medallist Srdjan MRVALJEVIC (MNE) to tap out to a sankaku-jime with 50 seconds left in the contest. UNGVARI, who was urged on from the stands by his older brother UNGVARI Miklos, is in the best form of his career and will fancy his chances of home success in Hungary this summer. 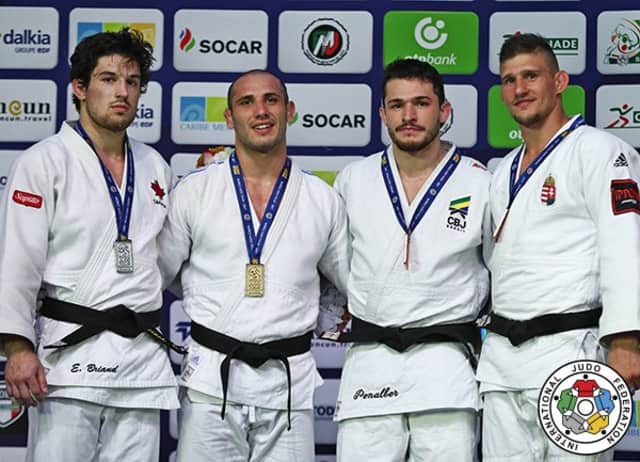