Written by Jo Crowley on 01. Apr 2022
Photographs by Gabriela Sabau, Marina Mayorova, Lars Moeller Jensen
Share
In September 2007 a fresh-faced 20 year old Erika Miranda competed at her first senior world championships. It was on home soil, in Brazil and she placed 5th, losing for bronze against Nishida of Japan. Nishida went on to become world champion in her home country, winning the 2010 Tokyo World Championships, while Erika placed 5th there too.

Two 5th places could be hard to take for a youngster but Erika had discipline on her side and continued, undeterred. Back in Rio de Janeiro, in 2013 Erika won the silver medal and finally stepped onto the world championship podium. This was the first of 5 medals, the last coming in 2018 in Baku. 12 years at world level and 5 medals later, with 2 Olympic Games participations and 6 Pan-American gold medals won, Erika retired, not unsatisfied with her career, but with a clear need to be finished. 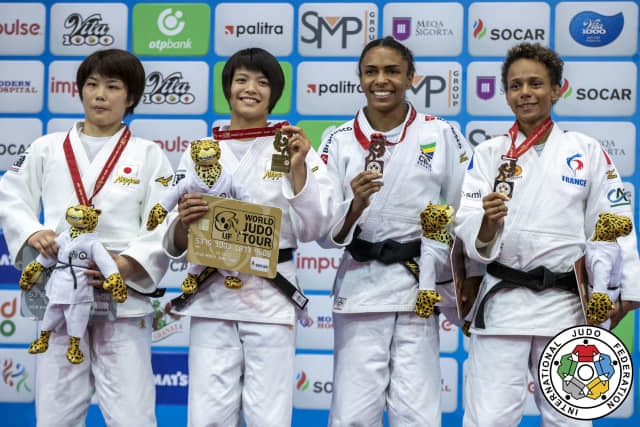 A world championship medal for the 5th and final time: Baku, 2018

“After I retired I went to Canada and studied business in Vancouver. I didn’t wear a judogi for two years. I was very stressed and had some problems with my health after retirement but this gap gave me the love for judo again, so it was right. I applied for a coaching role at the German centre in Munich. I felt that I had a lot of skills and experiences that I could share with a young team. They received me so well, helping me to adjust.

I’m taking classes in German, to learn the language. The pronunciation is so hard for me, with Brazilian Portuguese as my first language. So actually we work mostly in English. I want the judoka to speak in German with me but they don’t have the patience and almost always resort back to English. Claudiu, the German National Head Coach has been amazing. He speaks Spanish really well and so we manage without problems. 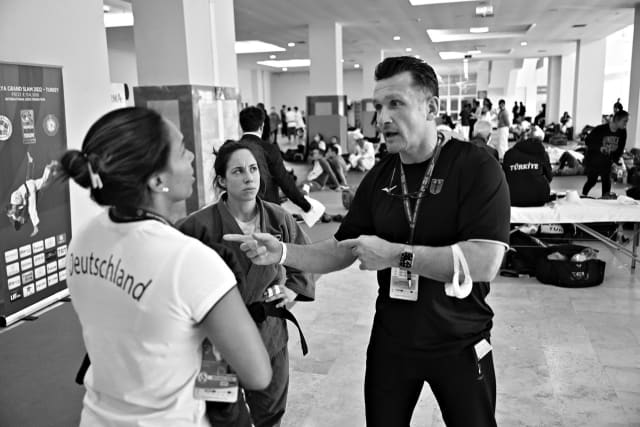 Erika with her Head Coach

I have been with Germany since October 2021 and already I won 5kg!” She laughs. It is a very different mental space from that of an athlete. 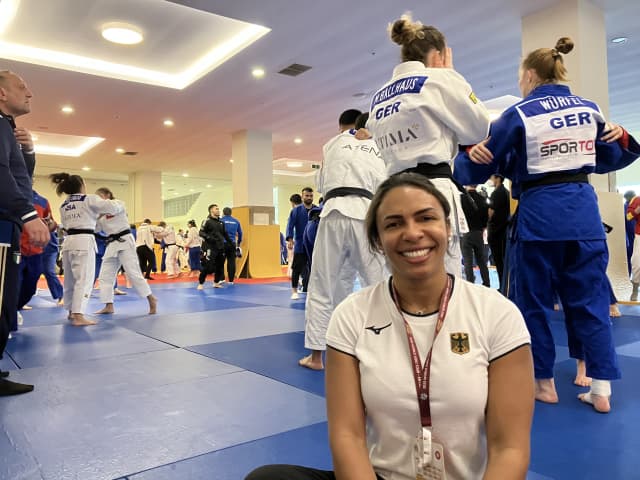 In the warm-up room at the 2022 Antalya Grand Slam

“When I was an athlete I didn’t observe a lot. Now I’m in Germany and I notice that there are really not so many women coaches. This is a big universe but there is not always a lot of space for women.”

International Women’s Day was just a few weeks ago and now the IJF is promoting the theme ‘Inclusion’ for this year’s World Judo Day on 28th October. With these dates in mind, we can add further significance to Erika’s appointment, especially as there are so few active female coaches in Germany. This is a high profile relationship and one which may well bring inspiration for many women involved in sport in Germany and beyond. 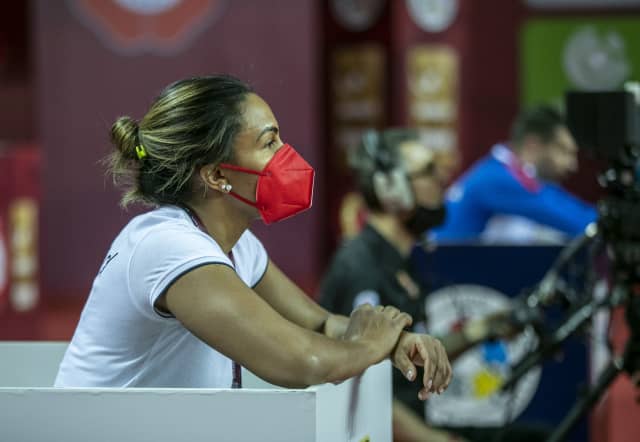 “I coach in Munich, at the centre there. I coach girls. It’s nice to coach them and I think girls have more feeling and are attached to their work, their training, maybe in a different way from men. I think they work harder mentally than the men, maybe not physically but mentally. These two areas are not separate, of course, in judo, but I see the women really engaged with their training.

Germany has a strong culture and I think it took them time to accept me but now they believe in the work. I changed a lot of things in the environment and the discipline they already have has been perfect. It’s the first time the girls have been led by a woman and this is different for them but they like it. They feel free to talk with me openly. It’s honest. There is a lot of fighting between us with all our strong personalities. Sometimes the respect is tested but these relationships, which include opinions, are necessary to really get to the depth of the job. I don’t want to be a coach where the athletes just follow the rules. It’s good that they test me and they push.

I’m very honest with myself and I know I have a big job to do. I work with seniors and have a lot of good girls in the team. My goals really revolve around helping this team to qualify lightweight women for the Olympic Games. I don’t know yet what the system will be for coaches at the Games but I am already so happy to be participating in the process. My ego doesn’t need the Games, just to do a good job to help the girls achieve what I know they can. In Germany there have been some problems qualifying lightweight women but I really think I can make an impact there.” 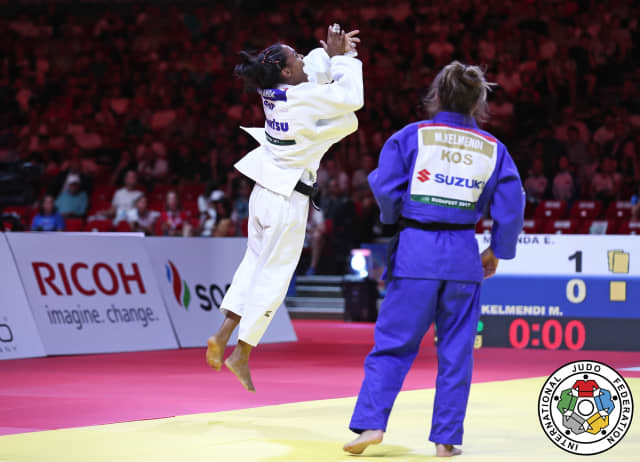 Winning bronze at the 2017 World Championships in Budapest

Erika is evolving and doing so with and open heart and mind. “Everything is new for me. I’m a coach now but I’m also still so curious everyday to learn more. I was like it as an athlete too, like a baby, always asking questions. As a coach I have the same butterflies I had when I was fighting, like I want to fight for them. When they win I feel I won too. It’s a crazy feeling. I’m still learning new things every day and it’s exciting. I’m so happy I came back to judo. It is home.

I was so far from the tatami in that two years off that even this morning I said to myself, ‘really Erika, you tried to escape judo and here you are back at a World Judo Tour competition!’ I really like this feeling, this energy.

I am giving the Munich girls my best and I am grateful they are here and they accept it. My way is so different for them but between us we are really making it work.” 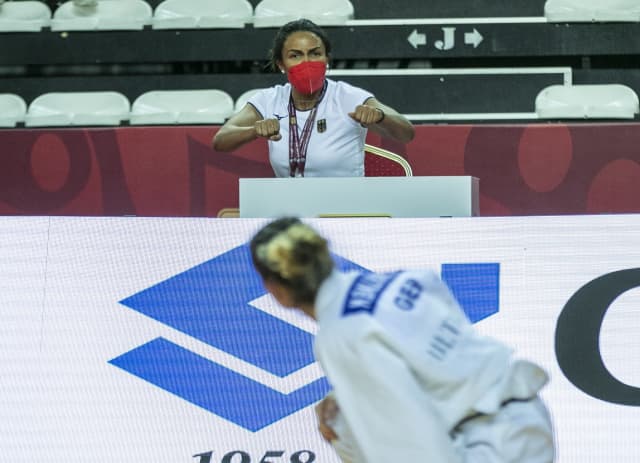 Erika is now one of a growing number of women coaches working in high performance. From Decosse to Boenisch to Nakano there is skill, commitment and drive and it is clear that what is most prominent is their ability and not their sex but as the world is not yet an even playing field and while judo continues to push forward in all areas of equality and inclusion, it is important to archive this shift, acknowledging achievement for all.

The 19th and 20th century mountaineer and explorer Fanny Workman was clear on this point, “When, later, woman occupies her acknowledged position as an individual worker in all fields… no such emphasis of her work will be needed; but that day has not fully arrived and at present it behooves women, for the benefit of their sex, to put what they do, at least, on record.”

This story is about Erika Miranda, but it is also about women and sport and values. Vamos Erika!