Written by Nicolas Messner, Leandra Freitas on 27. Apr 2021
Share
Judo is everywhere. This is not a fairytale. This is the reality. Through the Judo for the World programme, the IJF already had the opportunity to visit many incredible and remote places, where judo is present. This is always an enchantment, to discover that our sport, born in Japan, was able to spread all over the globe and enter the smaller communities, to share values that are universal. 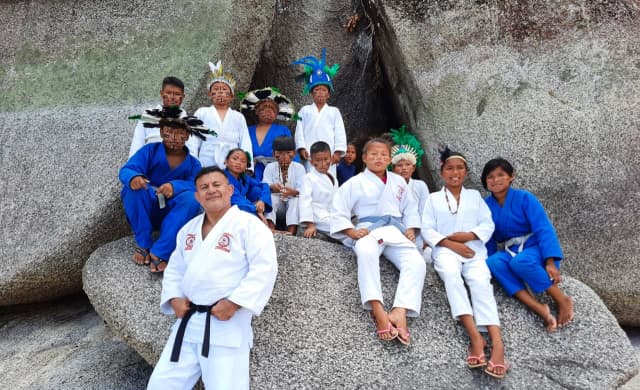 Brazil is a judo country, boasting numerous world medallists and Olympic champions. Thus, it is not surprising to find judo all over that nation, but what might seem a little more astonishing is that judo is also practised by indigenous people in the most isolated communities.

On the occasion of Indian Day* (Dia do Indio), celebrated on 19th April, Lucio Glaucio Mendonça De Almeida (Project Manager and founder of a social project) and Jessica Muller Lima da Silva (project teacher) organised a special event in the municipality of São Gabriel da Cachoeira, supported by the Brazilian Judo Confederation. The small city is located on the northern shore of the Rio Negro River, in the region of Cabeça do Cachorro, Amazonas state, Brazil, far away from the main cities. 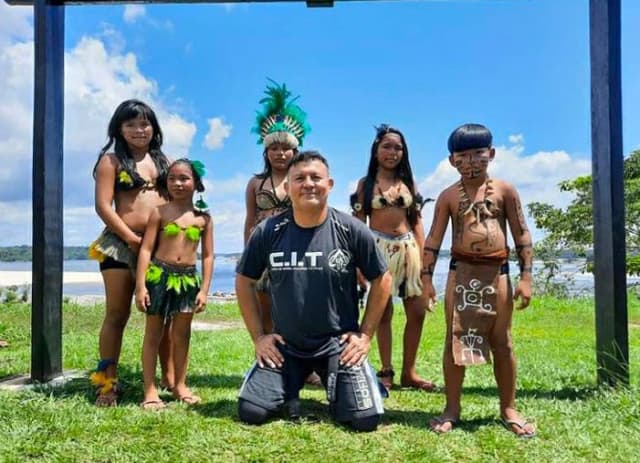 Lucio Glaucio explains, "In the municipality of São Gabriel da Cachoeira there are 23 ethnic groups and 95% of the inhabitants are indigenous, including Baré, Tukano and Dessano ethnic groups. Together with Portuguese, there are four co-official languages: Nheengatu, Baniwa, Tukano and Yanomami. From 46,000 inhabitants, 95 are now judoka. The programme that we have developed is a social project that aims to help children and young people in need."

Ney Wilson, High Performance Manager of the Brazilian Judo Confederation, said about the programme, "The Indian Day was a festive day for judo in the Amazon, where 50 young judoka, who have graduated from the São Gabriel da Cachoeira Judo Project, took part. It is unbelievable to think that they live 5 days away from Manaus, by boat!

This project, carried out in the most indigenous city in Brazil, is an initiative of the Municipality of São Gabriel da Cachoeira. However it has the support of the Brazilian Judo Confederation, the Judo Federation of Amazonas and the ACOPAJAM (Associação Comunitária de Pais e Alunos de Judô do Amazonas - Community Association of Parents and Students of Judo in Amazonas). Sensei Jéssica Miller is in charge of the project and maintains Jigoro Kano's judo and spirit in the indigenous capital of Brazil, with all her heart. We thank Mayor Clovis as well as the President of the Judo Federation of Amazonas, David Azevedo, for their support and we praise the dedication of our athletes and our teacher Jéssica, in this very important and significant place for our state! 'There is no more noble mission under the sun than that of teaching,’ as Jigoro Kano said."

All the students who participated in the celebration on 19th April are part of the Judo for All project and they all wanted to honour indigenous people.

The project, founded in November 2018, is an initiative of the municipal government of São Gabriel. It has been led by Jéssica since she joined the municipality sports department and according to the leaders of the programme, the demand has increased due to good results within the community.

For Lucio Glaucio and Jessika, "This programme is important for the children and the youth. Through it, they can follow and practise judo and the moral code of judo. It has already started to change the young people's view and helped them to escape from social vulnerability. The project has positive consequences and there is a call to develop it both in the city and in the riverside communities. It is important for social inclusion. The young people we train are also now entering competitions."

Unfortunately, for the moment, everything is on standby because of the global pandemic that affects Brazil massively. Nevertheless, the graduation ceremony took place on 19th April and everything will resume as soon as possible. 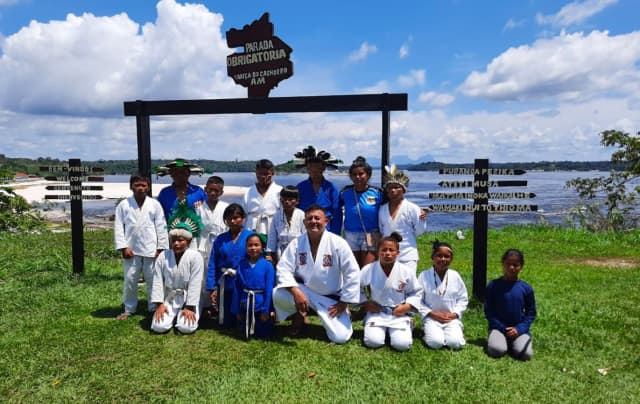 Lucio Glaucio and Jessika also explained that, "The goal of the programme is to increase the number of judoka and the number of beneficiaries, but the most important part is that the countryside needs sport as well because the number of drug addicts increases and judo is a way to fight the advance of drugs. Used as an educational tool, it has the power to contribute to athletes and to the citizens of our region."

This is a common observation; judo is never only a sport and physical activity. It is an educational tool. In a region affected by isolation and plagues such as drug consumption, the sport can help a lot. This is what Lucio Glaucio and Jessika are doing and this is why judo has such an important role to play and why judo on the shore of Rio Negro River is so colourful. 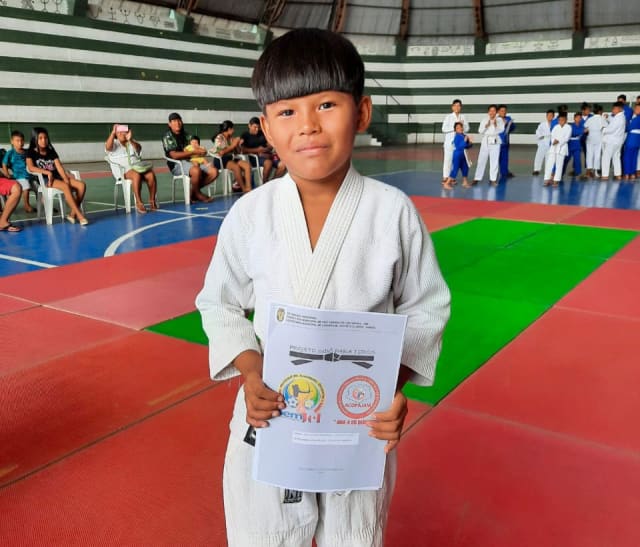 * - Indian Day (Dia do Indio), annually observed on 19th April, is an official holiday in Brazil, declared in 1943, that recognises and honours the indigenous peoples of Brazil. The indigenous peoples of Brazil are referred to as Native Brazilians or Brazilian Indians. They have inhabited the territory of Brazil since before the European invasion. Although the Portuguese had already known that South America was not India when they first reached the Brazilian shore, they continued to use the word ‘Indians’ (índios) to designate the people of the New World.

Indian Day was established to celebrate the anniversary of the first Inter-American Indian Congress that opened in Mexico on 19th April 1940. It is mostly celebrated in the states with a relatively large indigenous population. For example, the municipality of Bertioga, São Paulo hosts the National Indian Festival that is considered the world's largest indigenous cultural event. The main goal of Indian Day is to give Brazilians an opportunity to learn about culture and the traditions of Brazilian indigenous people and raise awareness of uncontacted peoples.

Interview
Julien Goes Around the World (6)