Written by Mark Pickering on 26. May 2018
Share
Day two results from #JudoHohhot2018

Two-time Grand Slam winner NOUCHI Aimi (JPN) won her first Grand Prix title as Japan continued to run away with top spot in the medal table. NOUCHI defeated u23 European Championships bronze medallist Gili SHARIR (ISR) to take -63kg gold after the injured Israeli could not contest the final. The Japanese has only lost to Olympic champion Tina TRSTENJAK (SLO) in 2018 - which came in the Tunis Grand Prix final - and will now become a regular sight on the IJF World Judo Tour. 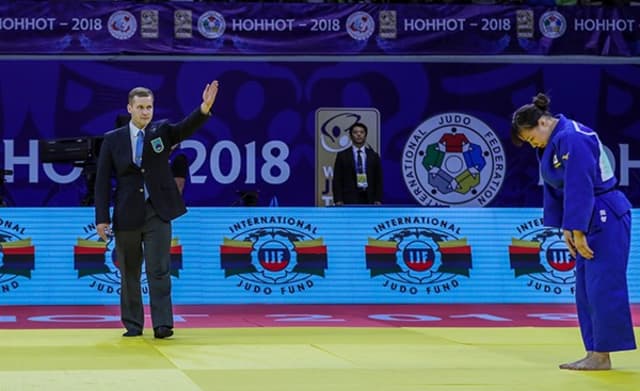 In the first semi-final SHARIR prevailed as former Junior Worlds bronze medallist Catherine BEAUCHEMIN-PINARD (CAN) was disqualified after being penalised on three occasions for infringing the rules. In the second semi-final NOUCHI bested Grand Prix debutant TANG Jing (CHN) by ippon as Japan guaranteed one more medal. The first bronze medal contest was won by Düsseldorf Grand Slam bronze medallist BOLD Gankhaich (MGL) who showed her character to come from behind to defeat TANG. BOLD fell behind to a waza-ari score before levelling terms with a beautiful sasae-tsurikomi-ashi. While the crowd was split between supporting the two judoka it was the Mongolian who triumphed with a seoi-nage in golden score which earned a second waza-ari.  The second bronze medal was won by BEAUCHEMIN-PINARD who defeated Beijing 2008 Olympic bronze medallist Ketleyn QUADROS (BRA) with the only score of the contest. The world number 19 from Brazil lost out to the world number 23 from Canada by a single waza-ari score from an ouchi-gari. Final NOUCHI, Aimi (JPN) vs SHARIR, Gili (ISR)   Bronze Medal Fights TANG, Jing (CHN) vs BOLD, Gankhaich (MGL) BEAUCHEMIN-PINARD, Catherine (CAN) vs QUADROS, Ketleyn (BRA) 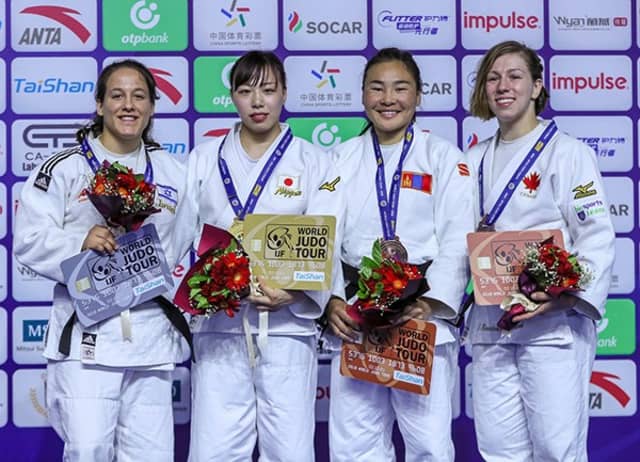 -70kg: VAN DIJKE victorious over former world number one for the Netherlands

Düsseldorf Grand Slam bronze medallist Sanne VAN DIJKE (NED) defeated Pan American Championships bronze medallist Kelita ZUPANCIC (CAN) to win the -70kg gold medal which was her first on the Grand Prix stage. VAN DIJKE conquered Canada’s former world number one to capture her country’s first medal at the Hohhot Grand Prix 2018 in a category which always delivers for the Netherlands. A waza-ari from the Dutchwoman was the only score of the contest in a highly-competitive final. 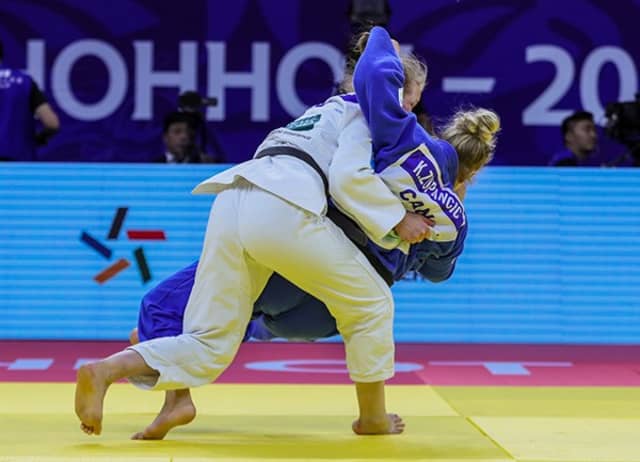 In the first semi-final European bronze medallist Gemma HOWELL (GBR) lost her concentration in golden score as VAN DIJKE held down the in-form Brit for her second waza-ari score. In the second semi-final world number one Maria PORTELA (BRA) was surprisingly beaten by ZUPANCIC who overpowered her long-time Pan American rival on the ground with a hold down for 20 seconds.

The first bronze medal was awarded to world champion ARAI Chizuru (JPN) who bested PORTELA with a buzzer-beating uchi-mata for ippon. Neither judoka would have expected to be contesting a bronze medal contest but that’s judo and the world number one overcame the world number two to reach the medal podium in Hohhot. The second bronze medal was won by HOWELL who threw Antalya Grand Prix winner Anna BERNHOLM (SWE) with a makikomi after one minute and 24 seconds of added time. London 2012 Olympian HOWELL defeated her former -63kg rival to continue her dramatic rise up the -70kg rankings in 2018. 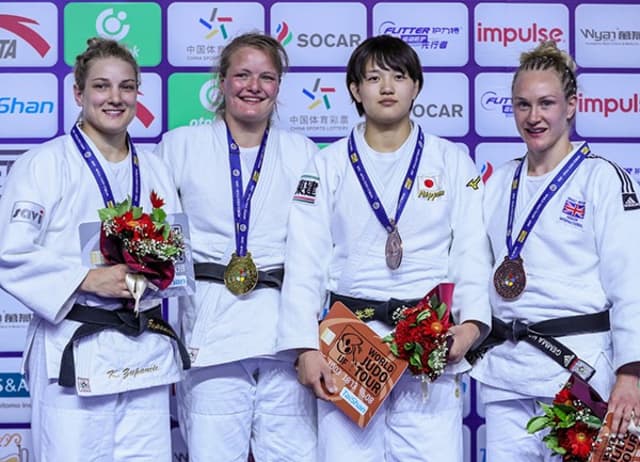 World bronze medallist AN Changrim (KOR) won his third Grand Prix gold at the expense of returning world champion HASHIMOTO Soichi (JPN). The two -73kg standouts have a rivalry which started in Japan at the All Japan Championships as AN qualifies for both countries and decided to compete for South Korea. One-time Grand Prix winner HASHIMOTO was unbeaten from early 2016 to the end of 2017 as he won 35 contests in a row in a run which turned him into a star in the sport but he met his match today as AN recorded one of the biggest wins of his career. World number one and AN were even in regulation time and produced far better judo in golden score. AN extended his head-to-head (4:2) winning run over HASHIMOTO with a seoi-nage after four minutes and seven seconds for a waza-ari score. HASHIMOTO was rusty all day long and you could see that he was making his first start on IJF World Judo Tour this year despite winning the All Japan Championships in April. 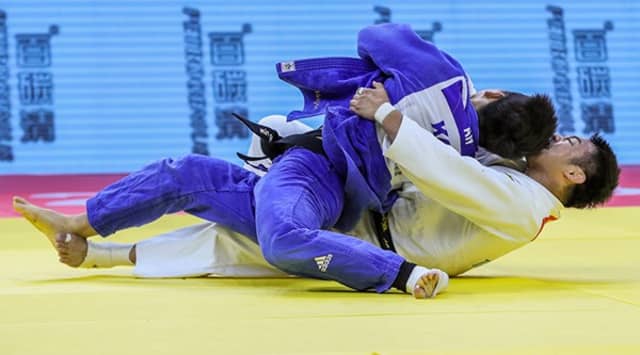 In the first semi-final HASHIMOTO put on a throwing clinic against Agadir Grand Prix bronze medallist Anthony ZINGG (GER) as he won by ippon having launched the German multiple times. In the second semi-final AN booked a place in the final after Ekaterinburg Grand Slam winner TSEND-OCHIR Tsogtbaatar (MGL) was penalised three times.

The first bronze medal was won by TSEND-OCHIR who won a riveting derby contest against former -66kg judoka QING Daga (CHN). Rio 2016 Olympian in the -60kg category, TSEND-OCHIR was more positive and produced a waza-ari with six seconds left as the crowd lapped up the back-and-forth action. A yoko-tomoe-nage effort from the young Mongolian subdued his opponent to spare both judoka from golden score. 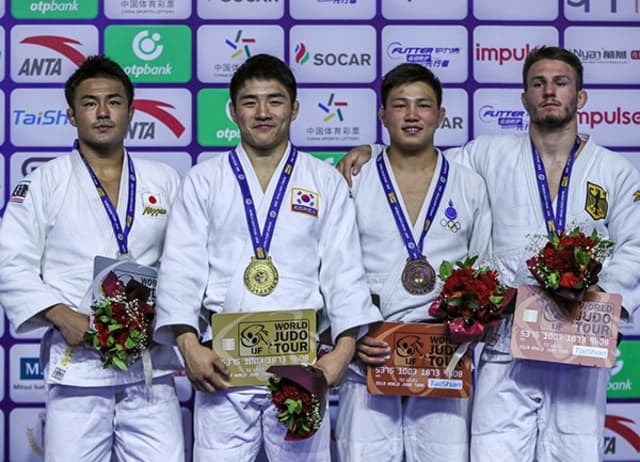 Ekaterinburg Grand Slam silver medallist SASAKI Takeshi (JPN) shook up the -81kg category by humbling Olympic champion Khasan KHALMURZAEV (RUS) after only 65 seconds in the final. SASAKI debuted on the IJF World Judo Tour at his home Grand Slam in December and in typically Japanese style has been quick to make his presence felt. KHALMURZAEV, who won world bronze last year, was left reeling by the Japanese and will be craving a rematch which will surely come in 2018. 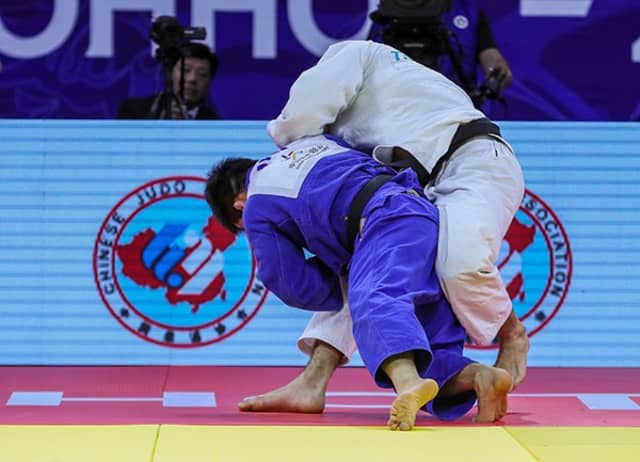 In the first semi-final KHALMURZAEV profited from an error-strewn display by Tbilisi Grand Prix silver medallist Anri EGUTIDZE (POR) as the Portuguese was penalised three times to receive hansoku-make. In the second semi-final SASAKI defeated Paris Grand Slam silver medallist LEE Seungsu (KOR) by ippon having led by a waza-ari in a one-sided contest.

The first bronze medal was won by LEE who defeated Junior world champion Matthias CASSE (BEL) 17 seconds into golden score by a waza-ari.

The second bronze medal went to four-time Grand Prix winner Alan KHUBETSOV (RUS) who thwarted EGUTIDZE with neat footwork that even his football counterparts would be proud of. KHUBETSOV salvaged a bronze medal with an ouchi-ko-soto combination in golden score for safe passage onto the -81kg medal podium. 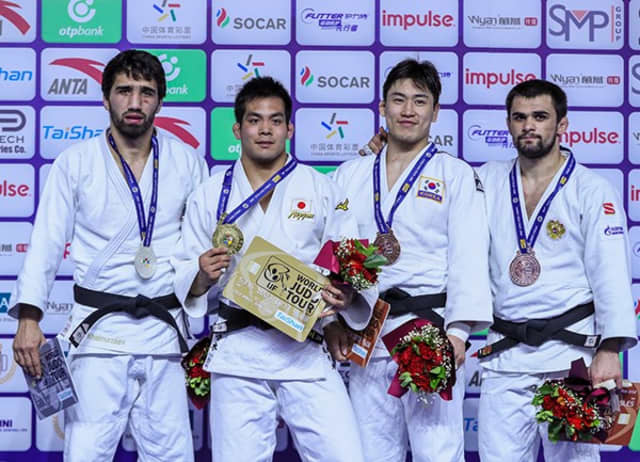