Written by Nicolas Messner, Jo Crowley on 12. Jan 2021
Photographs by Marina Mayorova, Emanuele Di Feliciantonio
Share
Gold for France, Japan, Korea and Georgia. Today has offered an equal spread of men and women, with most of the world’s middleweight superstars taking to the mats. A couple of notable names missing, such as Ono Shohei and Tina Trstenjak and Martina Trajdos, but that did not detract from the intensity of the judo. 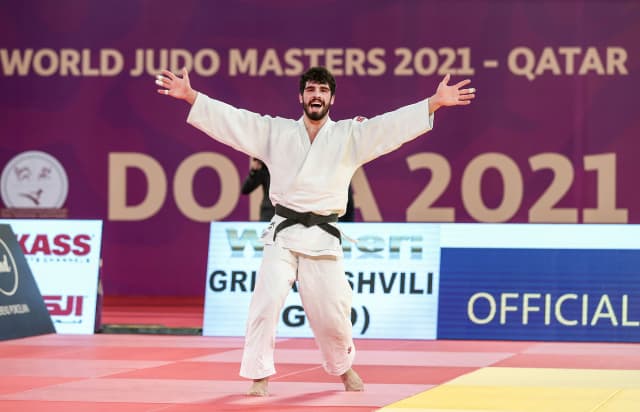 It’s been a day of power, clearly showing off the physical work that has been undertaken in recent months. The rhythm of competition is settling too and for the referees, coaches and officials, not just the athletes.

There has been a mix of fortunes for the number one seeds today, with -63kg and -73kg running somewhat to form, but they didn’t make it to the final block at -70kg and -81kg. Such is the excitement of judo, never predictable, but always spectacular.

At the end of day 2 there are 3 gold medals for Korea, two for Japan and France, one for Kosovo and Georgia. So far 16 countries have had representatives step up on to the podium.

-63 kg: Undefeatable AGBEGNENOU Unsurprisingly, Clarisse AGBEGNENOU (FRA), world number one and a big favourite of the competition, qualified for the final, during which she met the number two seed, the Japanese fighter NABEKURA Nami. Both athletes passed through the preliminary rounds without being endangered, although it can be noted that AGBEGNENOU did not win all her matches by ippon. 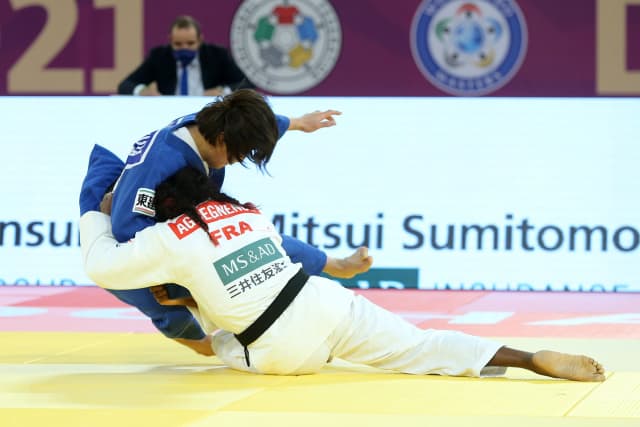 Well installed with her powerful guard on the left, AGBEGNENOU seemed to quickly take the measure of her final opponent, dominating her completely and making her take two penalties. At the same time, the Frenchwoman was penalised once and could still have been in danger. Without a mark on the scoreboard, the time for the golden score arrived with its share of uncertainty and still the same inability to turn domination into concrete action for the French competitor. It was only after 2 minutes and 41 seconds of added time that AGBEGNENOU managed to find an opportunity with a liberating tani-otoshi. To date, only Japan’s Doi has been able to put a chink in Clarisse’s armour, but that is looking more distant every day. No-one seems able to put the four-time world champion in danger now, but the road to the Olympic title is still long. 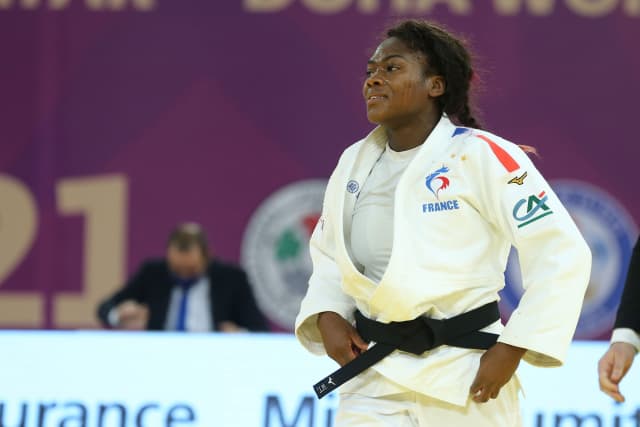 Anriquelis BARRIOS (VEN), second at the recent Hungarian Grand Slam and Sanne VERMEER (NED), winner of the Tbilisi Grand Prix in 2019, met for the first bronze medal contest of the day. The Dutch athlete scored a first waza-ari followed with an immobilisation to win her first medal on the occasion of the World Judo Masters.

In the second match for bronze, it was the gold medalist of the 2018 Düsseldorf Grand Slam, Andreja LESKI (SLO) and Magdalena KRSSAKOVA (AUT), winner in Cancun in 2018, who faced each other. After having scored a first waza-ari with a counter attack earlier the match, the Slovenian concluded with a clear ippon 50 seconds from the end, finishing a beautiful competiton day and a first medal on the occasion of the World Judo Masters. 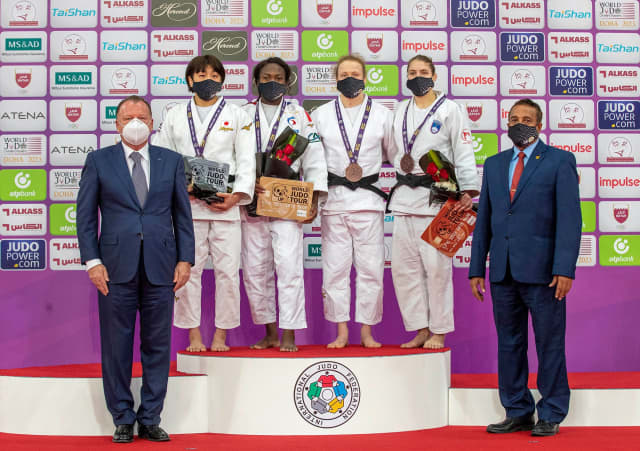 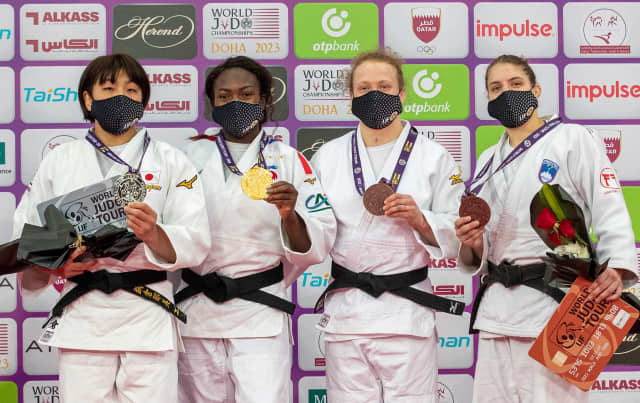 -70 kg: ONO Yoko Tops the Podium for Japan Marie Eve GAHIE (FRA) was expected to do well in the -70kg category after her brilliant world title in Tokyo in 2019. However, things did not go as planned for the Frenchwoman who bowed out at the hands of future finalist Madina TAIMAZOVA (RUS), in the quarterfinals. The latter therefore entered in the final, to face a regular at major world events, the Japanese judoka ONO Yoko (JPN). 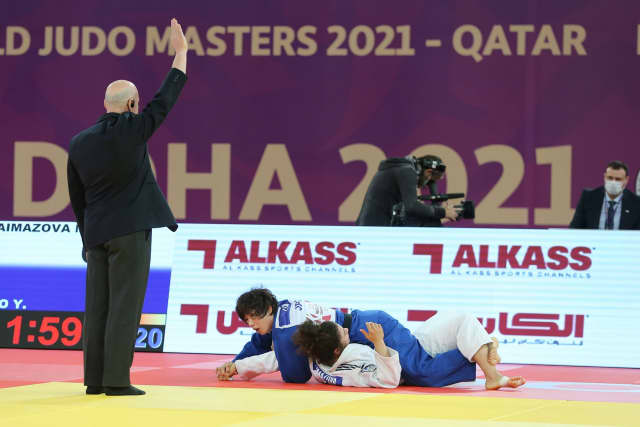 TAIMAZOVA resisted well during normal time, but the golden score period was too much for the young Russian, who had to suffer a defeat by hold down in less than two minutes of golden score. 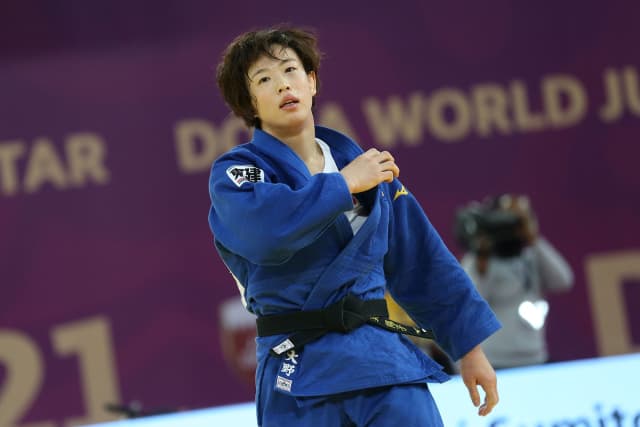 In the repechage, Marie Eve GAHIE (FRA) still had work to do for the possibility of getting on the podium, but lost to Kim POLLING (NED) who then faced her compatriot Sanne VAN DIJKE for the bronze. The very experienced POLLING, who with today's medal has won five medals at the Masters (4 gold and one bronze), defeated VAN DIJKE to again climb on to the podium; a World Judo Tour rostrum finish for the 22nd time in her career... quite impressive!

To complete the podium it was necessary to count on Giovanna SCOCCIMARRO (GER) or Aoife COUGHLAN (AUS). 42 seconds into golden score, SCOCCIMARRO scored a waza-ari with a wide hip movement that gave her her first medal on the occasion of the World Judo Masters. It has to be noted that Coughlan’s performance was unexpectedly strong, beating Polling along the way. She’s made huge strides in recent times and is knocking at the door of some impressive future medals. 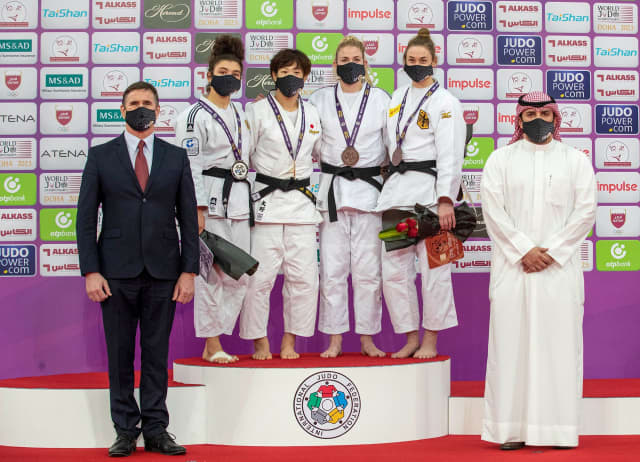 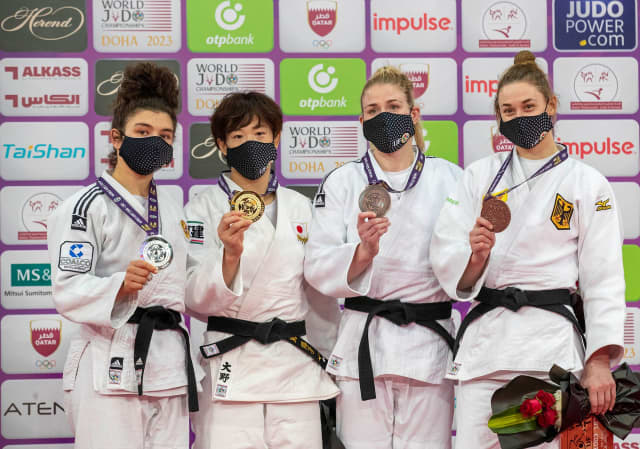 -73 kg: AN Changrim Brings the Third Gold Medal for Korea The 2017 world champion, HASHIMOTO Soichi (JPN) was the big favourite before the start of the day and without a hitch he made the final, to meet the 2018 world champion AN Changrim (KOR), in a match that promised to be explosive. 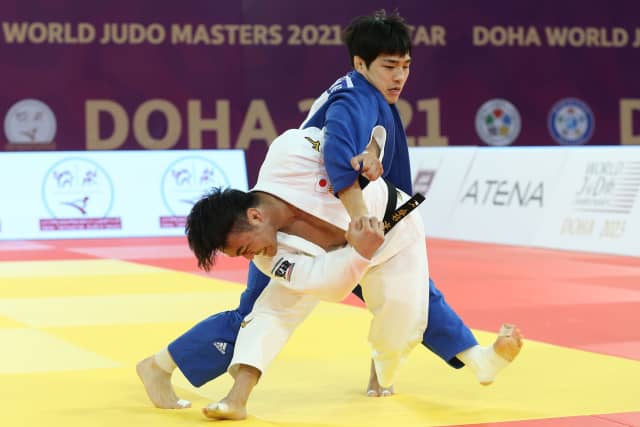 This action led to the disqualification of Hashimoto

At the end of regular time nothing was scored and the athletes entered golden score, where they continued to neutralise one another, incapable of finding the slightest opportunity to score. It was only after 3 minutes and 43 seconds of extra time that HASHIMOTO applied a dangerous technique for which he received hansoku-make, the victory going to AN Changrim, delivering a third gold medal to Korea, on the occasion of the 2021 World Judo Masters. 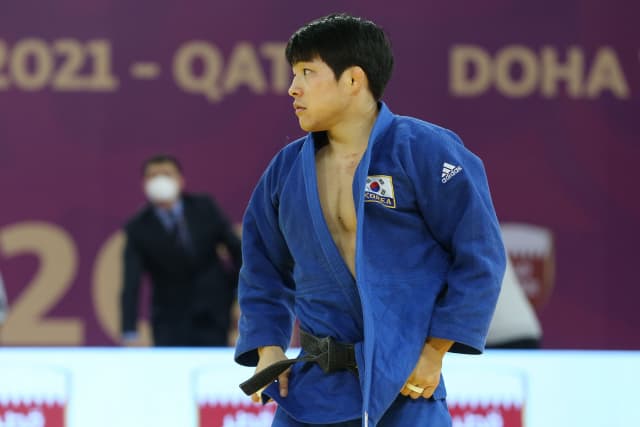 Igor WANDTKE (GER) worked hard for a chance to stand on the podium, fighting against Zhansay SMAGULOV (KAZ) for the bronze. With only a few seconds remaining on the scoreboard, WANDTKE scored a waza-ari with an opportunist’s seoi-nage, which brought him a well deserved bronze medal.

In the second bronze medal contest it was the Uzbek Khikmatillokh TURAEV who faced Antoine BOUCHARD (CAN) and who won the medal with a waza-ari. 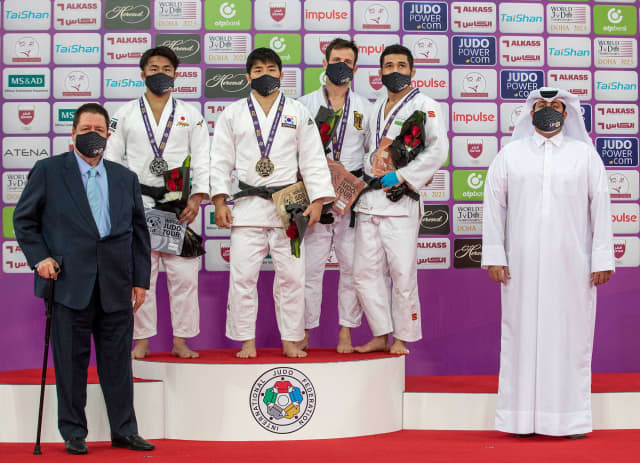 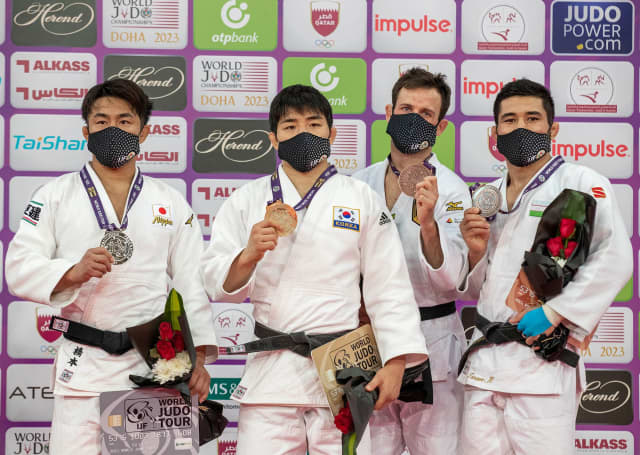 In the last category of the day, everything was possible with a field of play rich in world medalists. In the small game of eliminations, it was Tato GRIGALASHVILI (GEO) and Frank DE WIT (NED) who won through every round to give themselves a chance to climb on the top of the podium. 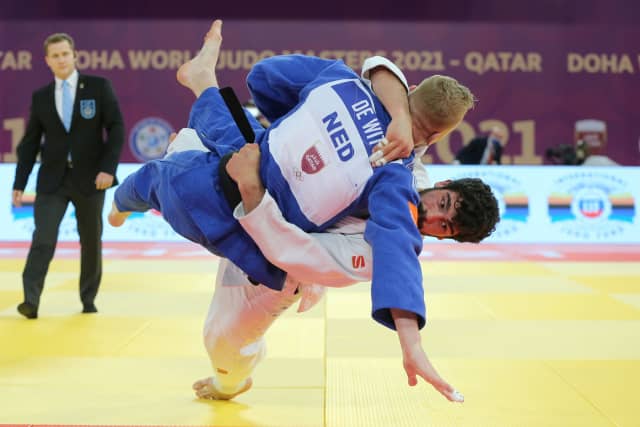 If the final it seemed rather balanced during a large part of regular time, but following a very slight injury DE WIT, on his return on the tatami, seemed slightly distracted, which GRIGALASHVILI was able to take advantage of to throw him before applying an unstoppable arm lock. Nice work Mr. GRIGALASHVILI! 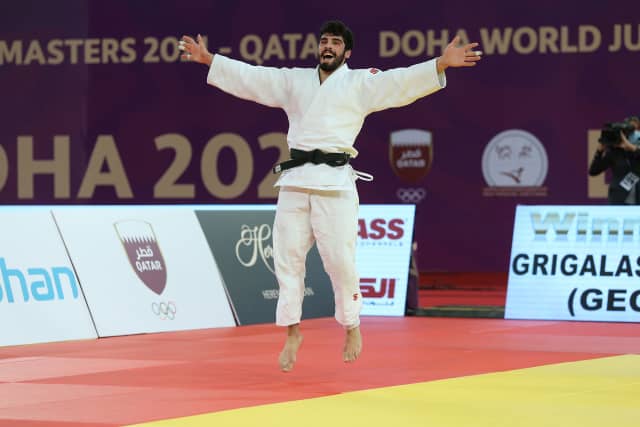 While some of the big favourites like Saeid Mollaei eliminated in the third round, or Antoine VALOIS-FORTIER eliminated as soon as he entered the scene, it was Alan KHUBETSOV (RUS) and Ivaylo IVANOV (BUL) who qualified for the first bronze medal match. Being thrown for waza-ari after a positioning mistake, with a seoi-nage, IVANOV had to run after the score to push KHUBETSOV to be penalised three times. This is also a way to win in judo and it's totally valid, especially since IVANOV really tried to score. His tactical awareness was at a very high level today.

2019 world champion Sagi Muki, absent from the circuit for many months, returned to competition for the Masters. Still a little short of form, he nevertheless qualified to compete for the bronze medal against LEE Sungho (KOR). The least that we can say is that it was a tough match; the world champion who was forced into golden score. When Sagi Muki launches an attack this is for real and that's what he did when he initiated a massive hip movement. Already falling down, LEE used all he had to change the momemtum to throw MUKI for ippon, or so it seemed at first sight. However, the first action was clearly Muki's, so after video refereeing, the ippon was canceled and a waza-ari given to the Israeli, which was totally logical. 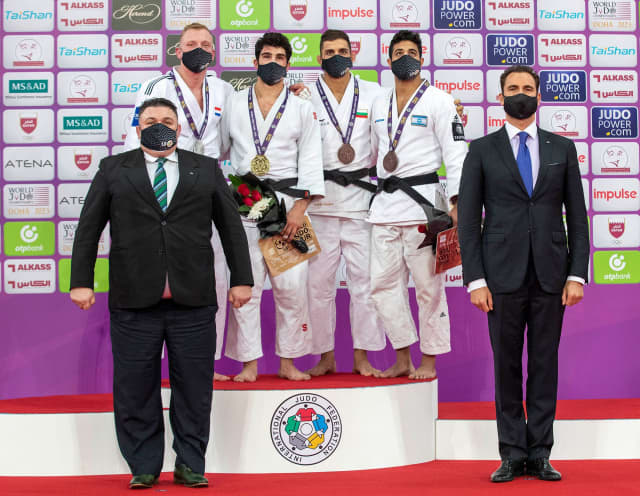 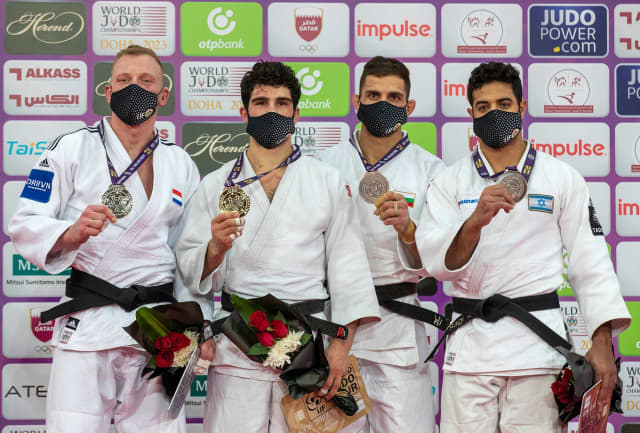