24. Sep 2021
Share
On 23rd September 2021, at the invitation of the Slovenian Olympic Committee, the President of the International Judo Federation, Marius Vizer, officially met for the first time with Slovenian judo clubs and members of the Slovenian Judo Federation in Ljubljana. During the visit he also met with the Minister of Economic Development and Technology, Zdravko Pocivavsek and visited coach Marjan Fabjan and the Z'dezele Sankaku club.

During the meeting, Mr Vizer presented the IJF's view of the current position of the Judo Association of Slovenia and gave his assessment of the successes and achievements of Slovenian judo in the past, along with his hopes for the future.

Marius Vizer said, "Slovenian judo has a successful results and a great future ahead of it and I am convinced that when members are deciding what the vision of Slovenian judo should be, they should consult with those who represent the pillars of Slovenian judo, including top athletes."

The meeting, which was attended by representatives of forty-two clubs, was held at the invitation of the Slovenian Olympic Committee. Bogdan Gabrovec, President of the Olympic Committee of Slovenia, said, "Judo has been the top sport in Slovenia over the last twelve years and during that time it has become a way of life in many environments. The desire of our Olympic Committee is that Slovenian judo continues to develop successfully in this direction.” 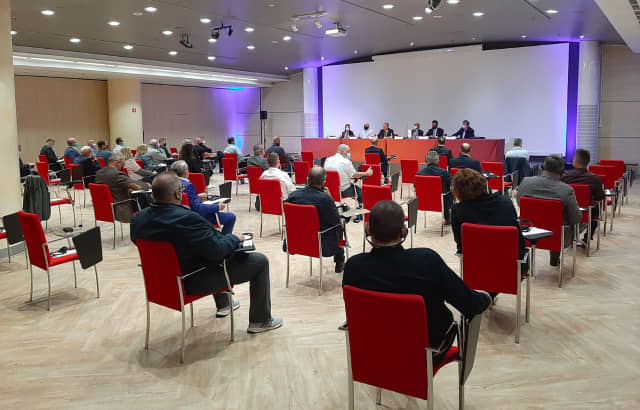 Vlado Cus, acting President of the Judo Federation of Slovenia, said about the meeting, "I am glad President Vizer visited the Judo Federation of Slovenia, during which, he honoured the successes of our judoka and JZS. I believe that with the help of the IJF we will also be able to carry out key projects we have set for ourselves. With their realisation we will be able to provide our judoka with conditions that will be comparable to international competition."

Marius Vizer also met with the Minister of Economic Development and Technology, Zdravko Pocivavsek in Ljubljana. They used the meeting to discuss the opportunities that judo, as one of the most successful Slovenian sports, home and abroad, offers for the development and promotion of sports tourism in Slovenia.

On the way to Ljubljana, Mr. Vizer also visited the Z’dezele Sankaku club and the most successful judo coach in the history of Slovenia, Marjan Fabjan. Coach Fabjan, together with Olympic medallists Tina Trstenjak, Urska Zolnir Jugovar in Lucija Polavder, offered guests a tour of the club premises. During the visit Mr Vizer surprised coach Fabjan and presented him with the IJF gold medal, the highest recognition of the International Judo Federation.

Interview
Anja Stangar is Back