Written by Nicolas Messner on 18. Feb 2019
Share
British judo holds a special place in the history of world judo and can be related to the expansion of the sport outside Japan. One can say that the specificity of the history of early British judo is due to the country itself as well as to the context and to the pioneering vision, the unflagging energy of the key figure: Gunji Koizumi. 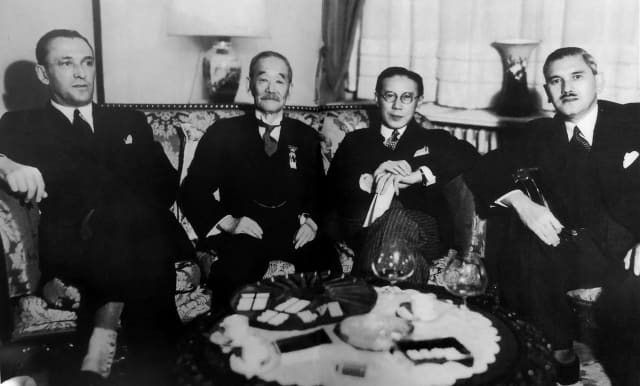 When the man arrived in London in 1906, jujutsu clubs already existed. Everything had started earlier on in the late 1890s when wrestling tournaments had been popular in major European cities. So this is not surprising that E. W. Barton Wright, an Englishman who had studied jujutsu in Japan, before Koizumi arrived, had already invited Tani Yukio in order to promote his own club, the Bartitsu-Club of London.

Tani's name had become a symbol of invincibility and Kooizumi practiced in Tani's Dojo. After having spent three years in America to study electrical engineering, Gunji Koizumi was back and active in various London jujutsu schools. At that time, the writings of two British judoka, E. J. Harrison and W. E. Steers, both Kodokan members, had contributed to making Kano's judo better known to British readers. In January 1918, Koizumi founded the Budokwai in London, partly to help the Japanese in very difficult situations, partly to develop the fighting art in Great Britain.

The Budokwai was a martial arts society but mostly kendo and jujutsu were taught. The 1918 promotion show included wonderful exhibitions such as naginata*, nabebuta**, kusarigama*** or iaijutsu****.

In 1920, as a result of Kano's visit to the UK, the Budokwai adopted the principles of Kodokan Judo. Koizumi as well as Tani, who was the chief instructor, became Kodokan members. Lectures on various aspect of Japanese culture completed the programme. Kano himself, supervised the evolution of the club. Throughout the years the promotion of Budokwai was constant and well orchestrated. During the 1927 annual exhibition attended by his Imperial Highness, the Japanese grading system was improved by using coloured belts for grades under the black belt. It must be said that colored belts as we know them today didn't exist in Japan at that time. This innovation that was later systemized by the French was largely responsible for the success of judo in the world.

From a professional point of view, Koizumi had become a successful expert in oriental lacquer work and he used his money to support the Budokwai until the 1930s and during the war. Judo had by then entered the closed world of British top universities. A black belt committee, the Yudanshakai of Great Britain, was created in 1934. Budokwai members were active and dedicated. They considered that judo was a principle for life. 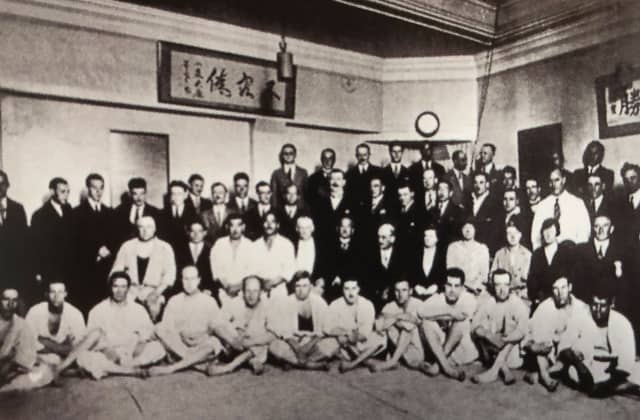 The Budokwai in 1928 (© courtesy of Richard Bowen)

In the early 1930s, Trevor Leggett, one of the most influential figure in British judo, toured Europe teaching judo before leaving for the Kodokan. Judo appeared on British TV in 1938 for the first time thanks to the efforts of John Barnes, the future president of the Budokwai. A close relationship existed between Kano and Koizumi. For a long period of time, British judo was like a European springboard for Kodokan judo. For example until the 1960s, the British Judo Association only awarded grades up to 3rd dan, the Kodokan Tokyo awarding higher grades.

In Germany, the apparition of the 'Japanese method' is linked, like in other countries to the discovery of Japan's culture and military strength. In 1906, under the impulse of Erich Rahn in Berlin and, later on, of Alfred Rhode, in Frankfurt, jujutsu started to be better known and it spread to the main cities of the country. Years later, Dr. Shigeyoshi Matsumae, the 4th president of the International Judo Federation, would recall the year he spent in Germany in 1933.

In Berlin, he met 'an old judo acquaintance', Kitabatake Kyoshin: “At that time, he was a 5th dan and a very powerful man. So we were more or less evenly matched. At university, he had specialized in Indian philosophy and had come to Berlin to study German philosophy. [...] Of course, our conversation at once turned to judo, which was very popular in Germany. The Japanese students used to spend their free time practicing with the Germans and Kitabatake was the leader among them.“

During the 1920s-1930s, the organization of physical education and sports became a political priority in Germany. Fundamental reforms were made in order to control national sports structures. Consequently, the development of the Japanese method benefited largely from the general trend. The police and the army granted a special place to jujutsu and judo. The national-socialist party attributed a big role to athletic activities in the formation of citizens. The manly and formative values of physical exercices and combat sport were exploited in the instruction of special forces in the army. 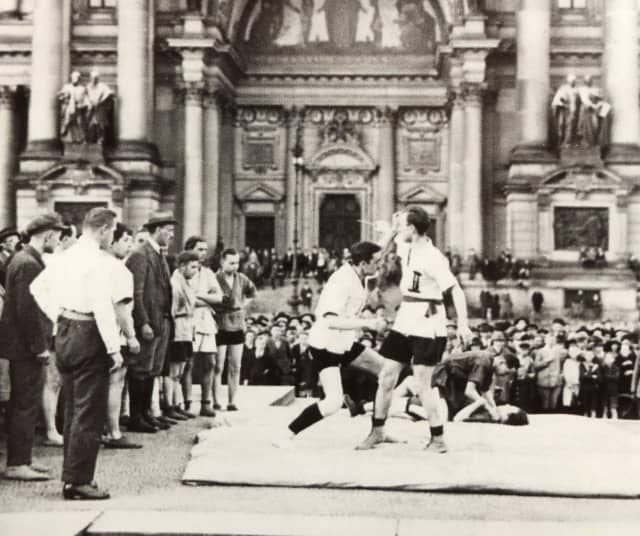 In the 1930s, the growth of German judo was unequalled in Europe. Regular international contacts occurred as early as the late 1920s. But there were also several exchanges within Europe. On 15 November 1929, a team from the Budokwai was invited to meet a team of the Frankfurt Jiu Jitsu club. On the 17th, a second meet was staged against the Jiu Jitsu Club of Wiesbaden. In August 1932, an international 'Judo-Sommerschule' was organized. Alfred Rhode ran this summer camp with a group of Japanese experts, including Koizumi, Tank, Ishiguro, Kitabatake and a Korean Rhi, who was teaching in Switzerland. It brought together judo players from Germany, Great Britain, Switzerland and Hungary.

Jujutsu was introduced in France via Great Britain by Edmond Desbonnet, who practiced with Tani at the Bartitsu Club in London and was eager to import the Japanese method to Paris. In September 1905, the French Apostle of Bodybuilding opened the 'Salle des Champs-Elysées' immediately attracting the Parisian elite. But after a short while, his agreement with Ernest Regnier, the first French instructor, broke.

It was not before the late 1920s that a permanent structure was established, the jujutsu section of the ‘Ecole Spéciale des Travaux Publics de la ville de Paris‘ (ESTP), a civil-engineering school. Moshe Feldenkrais ran the class. Ukrainian-born, Feldenkrais had gone to Palestine shortly after the 1917 revolution and the Balfour Declaration. He was one of the 'Builders of Israel'. Back to Paris at the beginning of 1930s, he registered at the ESTP. Thanks to the help of the head of the school, he was appointed jujutsu instructor, which paid for his tuition. At the same time, he became the assistant and friend of Professor Frédéric Joliot, who received the Nobel Prize for Chemistry in 1935. 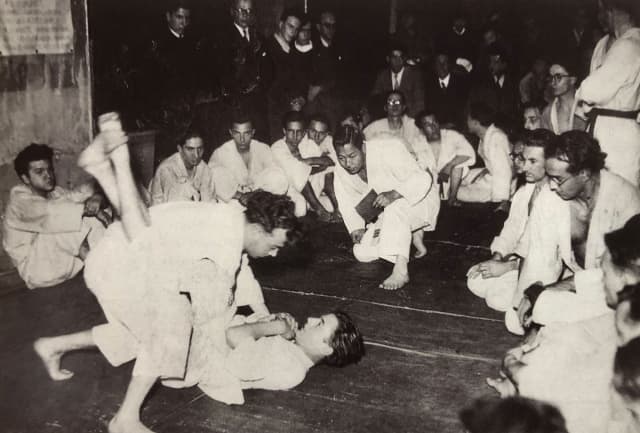 The dojo was located in the Quartier Latin, and its members were students, scientists and intellectuals in engineering schools or at universities like La Sorbonne. Some professors of the well-known Collège de France took part in the practice. The teachings of Feldenkrais were self-defense-oriented. But, using his knowledge on anatomy and physics, he put the stress on the analysis of body motions. In 1933, he attended a lecture given by Kano. Feldenkrais was very impressed. He managed to meet the founder of judo. They appreciated each other and started an exchange of ideas over the years. In September 1936, Feldenkrais and other scientists established the Jiu-Jitsu Club de France (JJCF) during Kano's new stay in Paris. Kano accepted an honorary position in the club.

Each in their own way, Great Britain, Germany and France were going to play in important role in the broad movement of internationalization and sportification of Kano's judo. The combined contribution of these three nations led to the establishment of the basis upon which judo will develop as such. While English judo appeared to be a European relay for Japanese judo, German judo chose a sport orientation. France, meanwhile, took a third path, that of independence. Westnernizing and marketing the teaching of Kano's method, French judo offered an alternative to Japanese judo.

* The Naginata is an ancient weapon that can be compared to the western halberd. Initially used by Samurai, foot soldiers and warrior monks during battles, it later became mainly a weapon used by women. Thus is was a must to study Naginata for all ladies born into a Samurai family.

** The Nabebuta is the use of saucepan lids in self-defense, described by one journalist at that time as resembling “wooden cymbals”.

*** 'Kusari' means chain, and the 'Kama' was originally a farming tool, a short sickle. Combined, it forms the 'Kusarigama', a weapon used mainly in Okinawa, designed from simple tools to bypass laws against the possession and carrying of weapons in medieval Japan.

**** The iaijutsu is the art of drawing the sword. It is one of the Japanese martial disciplines in the education of the classical warrior. It's a combative sword-drawing art but not necessarily an aggressive art because iaijutsu is also a counterattack-oriented art.