Written by Nicolas Messner on 07. Oct 2021
Photographs by Gabriela Sabau, Marina Mayorova
Share
Although there were only three categories competing on the second day of the 2021 World Junior Championships in Olbia, -57kg, -73kg and -63kg, they were three particularly dynamic categories, from which the judo had the scent of major international senior competitions. 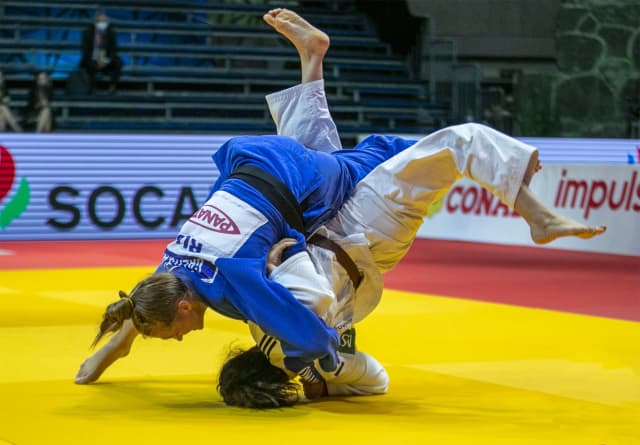 The favourites' competition day mirrored what often happens in this growing age category, namely that for some the plan was followed, while for others the path was strewn with pitfalls, from which all of them did not get up. Before the start of the final block, Kerem Primo (ISR), barely 16, had demonstrated all her know-how, like the Romanian Adrian Sulca, while Szofi Ozbas (HUN) failed to repeat her performance of the last World Junior Championships, which she won with unexpected mastery.

Winning the world title among juniors is quite an achievement. For all the athletes present in Italy, it is the culmination of a promising start to their career. All are already training like their elders and many are already competing in the upper age category. Often the changeover from junior to senior is therefore gradual, although it is well marked; being a successful junior does not have the immediate consequence of getting on a senior podium.

Nevertheless, it will be very interesting to follow the journey of our new champions in the weeks and months to come when they appear on the World Judo Tour. We already know, for instance, that almost all of the French athletes present in Olbia will be lined up for the Paris Grand Slam the following week.

Beyond the competition and the results, it is therefore the construction of the future of world judo that we have witnessed for two days in Italy. 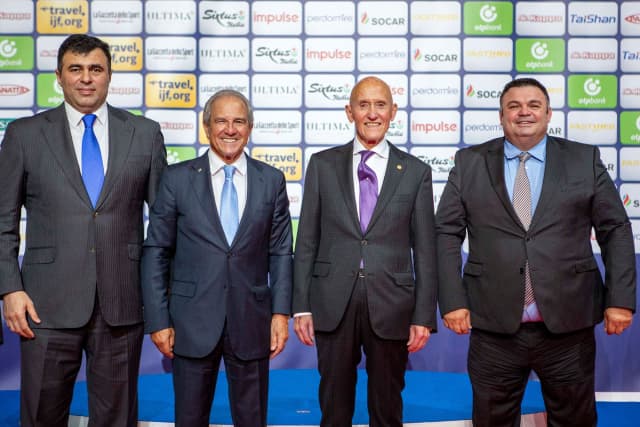 Juan Carlos Barcos said, "Being here together is a fantastic way through. We have been working together for many years and now our friends represent the future. I am very proud of the work done together."

Jan Snijders explained, "This new Refereeing Commission team is lead by big champions who are well known for the quality of their judo knowledge. This is what judo needs." 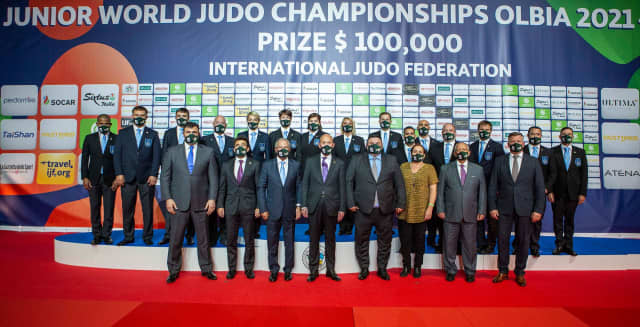 Florin Daniel Lascau added, "For many years we have been following our elders advice. The legacy of Juan and Jan is enormous. A new team has come together and thank you to them for having shown us the way."

Armen Bagdasarov concluded, "I can only say thank you to Juan and Jan. They taught us what we know and answered all our questions. We represent the future but without them we wouldn't be here and we still respect all that they represent."

-57kg: A Generous Win for Galitskaia

Only 16 years old, Kerem Primo was nevertheless the favourite of the competition and she didn't disappoint her fans. The Israeli qualified for the final where she faced Kseniia Galitskaia (RUS). Primo showed all her technical and tactical skills during the preliminary rounds, which is impressive with an athlete of such a young age. She obviously benefits from the experience of her senior teammates in the national team. 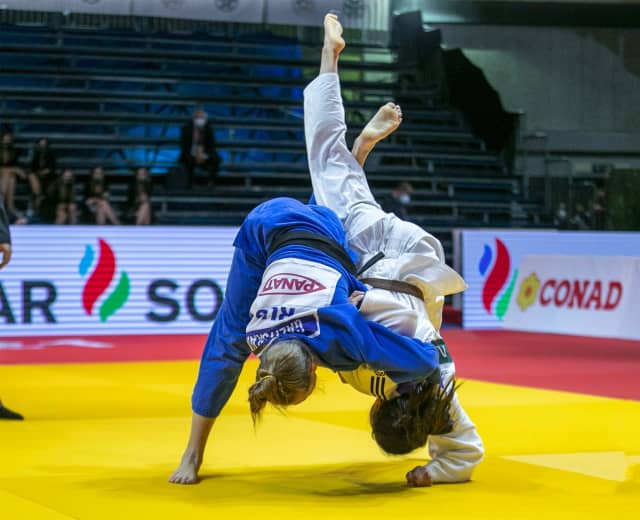 We witnessed a very intense final, with Galitskaia being taller than her opponent and trying some massive uchi-mata attacks, when Kerem Primo seemed to be quickly the most dangerous. What we can say for sure is that both athletes were very generous in all their attacks and it maybe because Primo was too generous that she put everything into one uchi-mata attempt that Galitskaia immediately overpassed to throw her with an acrobatic uchi-mata sukashi for ippon. 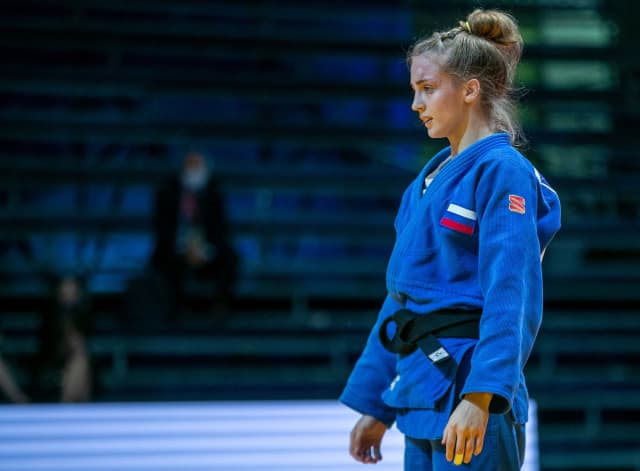 Kseniia Galitskaia said, "It was the first time we faced each other so I did not know what to expect. I saw she likes to attack; me too! And that is what happened. We both attacked at the same time but I was faster. That is how I won."

In the first bronze medal match Veronica Toniolo (ITA), who was coached by her dad, faced Ozlem Yildiz (TUR). After little more than one minute in the golden score period, Toniolo was penalised a third time offering the victory and the medal to Ozlem Yildiz.

The second bronze medal contest of the category saw Faiza Mokdar, who used to compete in the lower weight division, facing Natalia Elkina (RUS) for place on the podium. The match started with a clear domination of Natalia Elkina who seemed stronger than her opponent but on the floor Faiza Mokdar did a really nice piece of groundwork to pin down the Russian. Within a few seconds, Elkina simply stood up, as if it was easy. Mokdar didn't give up and pinned her down again. This time she held her down for 20 seconds to win the bronze medal. 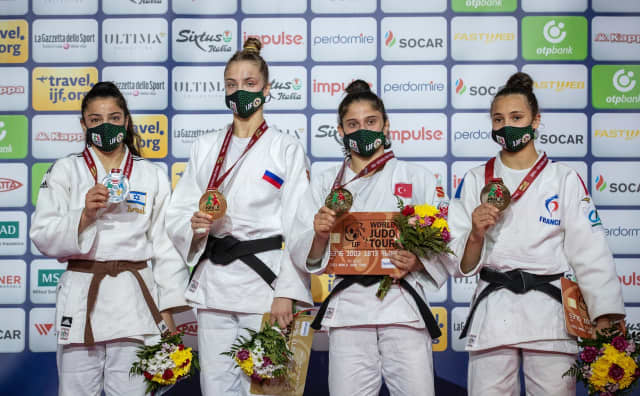 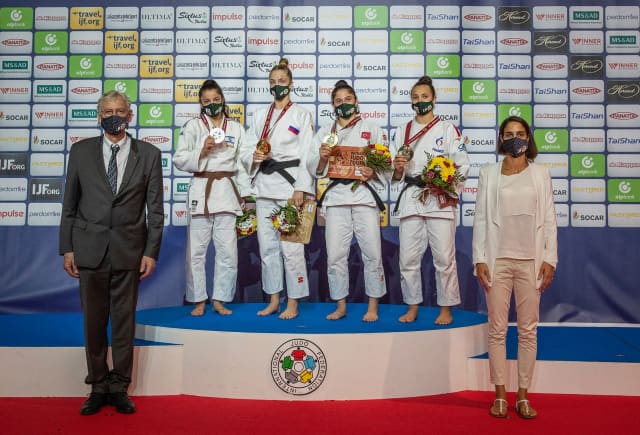 Medals, flowers and checks were presented by Mr Jean Luc Rouge, General Secretary of the International Judo Federation and Ms Giulia Quintavalle, Member of the Technical Commission of the National Olympic Committee of Italy and Olympic Champion

If the first athlete qualified for the final, Adrian Sulca (ROU) became known rapidly, it took a long golden score between Umalt Demirel (TUR) and Joan-Benjamin Gaba (FRA) to determine who will face him. It was eventually Demirel who qualified after Gaba was disqualified for applying a forbidden technique. 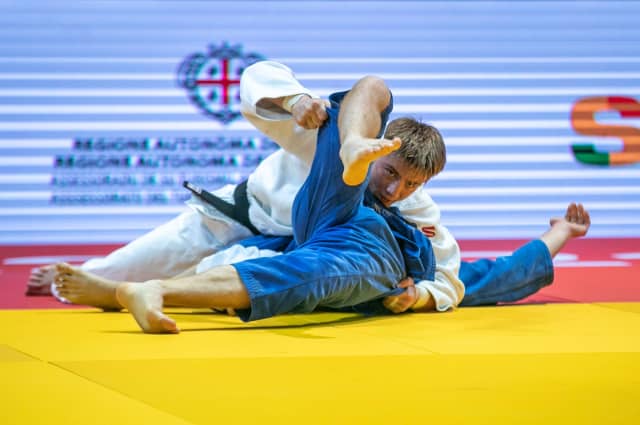 The first interesting sequence of the final was on the floor, with Adrian Sulca showing all his skills to take control over his opponent, but Demirel showing no less effective defensive capacities. The match kept going with a steady but intense pace until another groundwork session. This time Adrian Sulca did not let his chance pass by. He flipped Demirel over to pin him down for ippon. At the end of the match the winner showed his respect to his opponent by helping him to stand again. 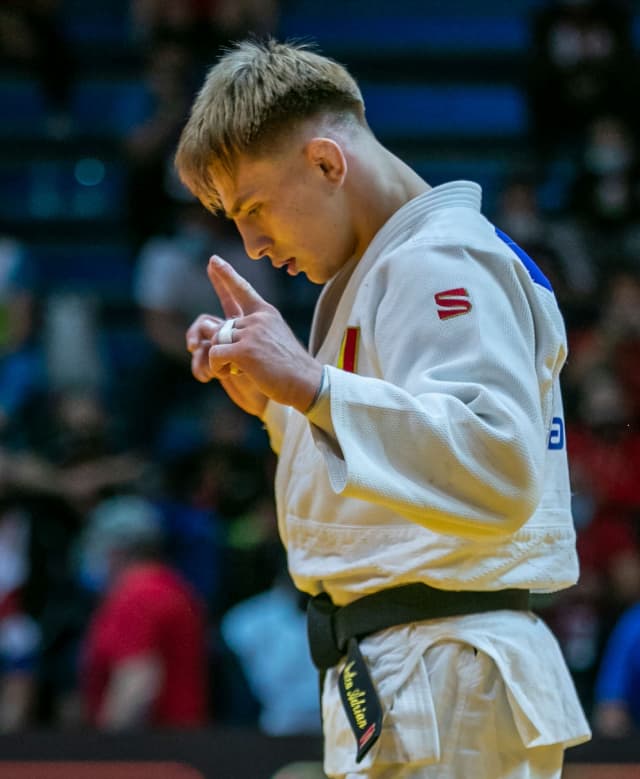 Adrian Sulca said, "I’ve been working so hard for this moment. My toughest opponent is me. I have to repeat to myself to not give up. I didn’t give up! I had fun on the mat and now im world champion. Next step: the senior category!"

In the first bronze medal contest, Joan-Benjamin Gaba still had a chance to climb on the podium against Luigi Centracchio (ITA), who had the whole Italian delegation behind him to cheer and hope for another medal of the host country. After having been penalised twice already, the French judoka was under pressure and for the second time in a row after his semi-final, he applied a forbidden technique and was disqualified, giving the bronze medal to Italy to add one more award for the host country.

The second match saw Jus Mecilosek (SLO) reaching the bronze medal contest against Czech Daniel Pochop. Mecilosek, scored a first waza-ari to take the lead, but the score was cancelled. The match went on with several strong attacks from both sides, but eventually Daniel Pochop scored a waza-ari after 2 minutes and 10 seconds of golden score, with a koshi-waza technique, to win the medal. 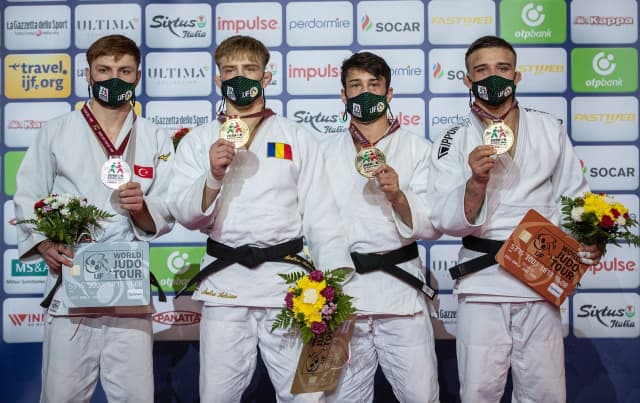 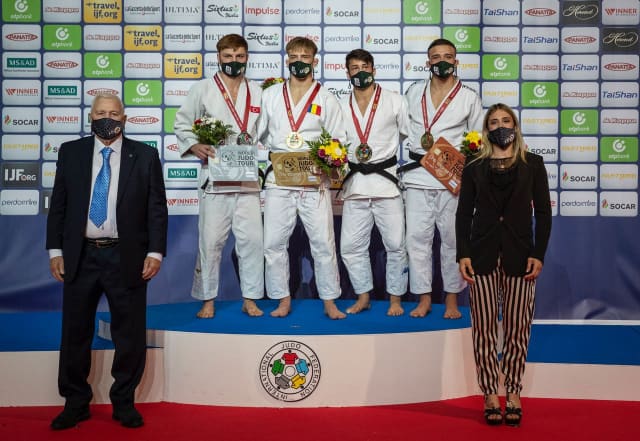 Current Junior World Champion, Szofi Ozbas of Hungary was the indisputable favourite of the competition, but in the quarter-final she faced future finalist Joanne Van Lisehout, who was on fire today in Olbia. After the Dutch fighter scored a waza-ari, Ozbas was incapable of scoring back. Van Lisehout continued on her way as she eliminated French Mélodie Turpin, who so far had a perfect day. In the final, Van Lisehout was opposed to Laura Vazquez Fernandez (ESP), who, without making too much noise, climbed one by one the steps of a great day of judo. 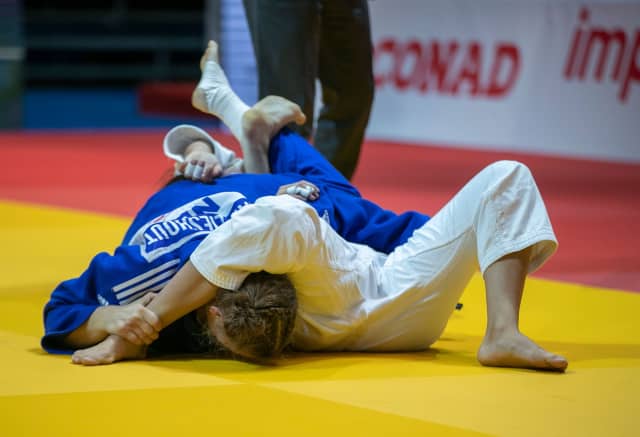 After three previous matches between the two athletes, Van Lisehout always won and once again she took the lead with a strong waza-ari, pushing Laura Vazquez Fernandez to her limits. With one minute remaining on the clock, Joanne Van Lisehout pinned down the Spanish competitor for ippon. It seems obvious that no-one could stop the determination of the Dutch athlete to become junior world champion today in Olbia. 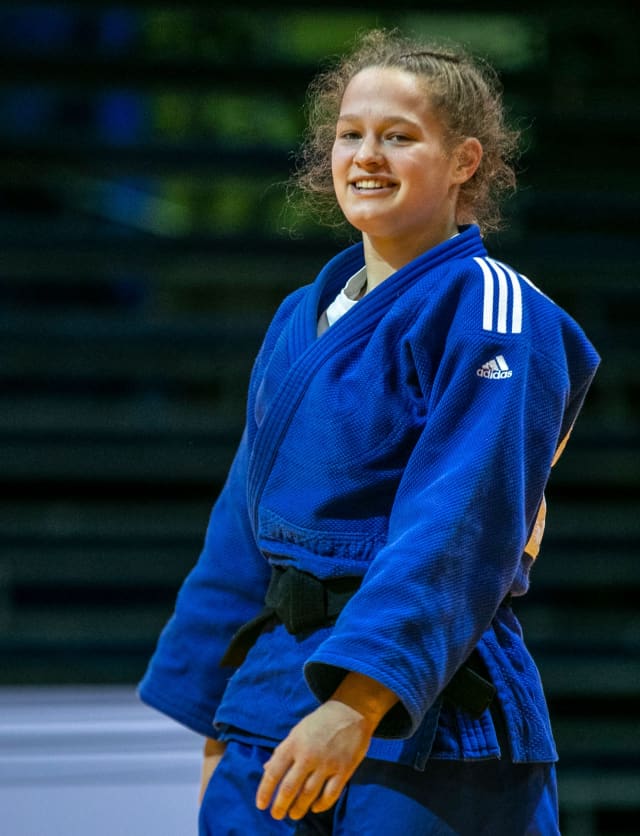 Joanne Van Lisehout said "I wasn’t feeling great this morning but I didn’t know why. I decided to take the day match by match and I saw I was growing round after round. In the end I felt good and I stayed focused until the end. Now I will enjoy the gold and have a little rest before the team competition."

Brigitta Varga is a member of the active and performing Hungarian delegation. To step on the podium she still had one important match for bronze against Mélodie Turpin (FRA). Varga produced a massive hip technique to throw Turpin for ippon and a well deserved bronze medal at the end of the day.

Szofi Ozbas, who is a regular on the World Judo Tour now, still had a chance to add one more line to her already beautiful prize list. For the bronze medal she met Katarina Kristo (CRO), who was for sure inspired by the feat of Barbara Matic, earlier this season, when the Croatian competitor became the first judo world champion ever in her country. Obviously Katarina Kristo had a plan and she followed it. Every time Szofi Ozbas put her strong left arm under Kristo's arm, the latter was attacking to avoid Oszbas and install her kumi-kata. Slowly but surely the match was getting close to the end with nothing scored but at the very last second, the tactic that Katarina Kristo had been applying, worked out and she scored a waza-ari with a yoko-otoshi to win bronze. 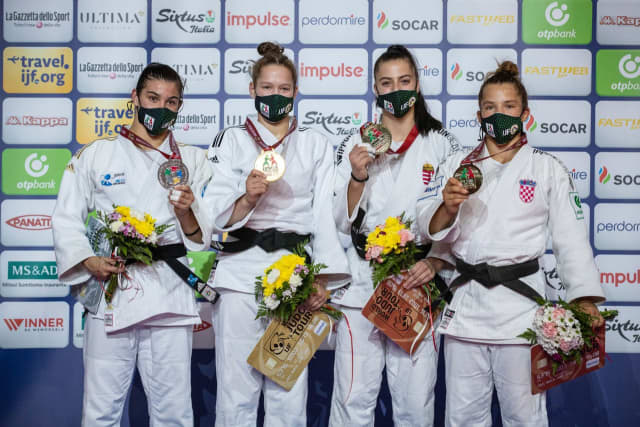 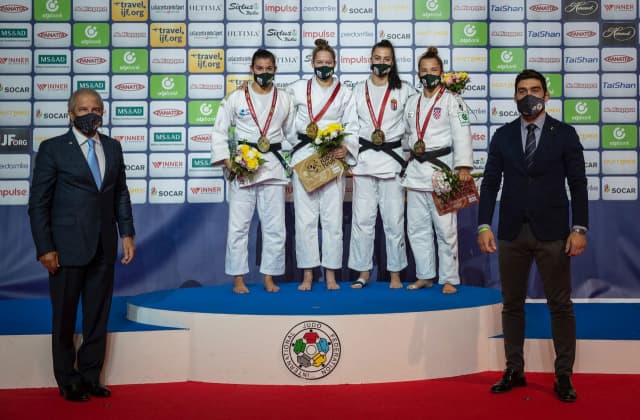