Husband and Wife to empower Women in Judo

Written by Nicolas Messner on 25. Mar 2019
Share
Johannes Daxbacher (GER) is an active member of the IJF Military and Police commission. A policeman himself, he has been involved in Ethiopia for many years, together with his wife Regina, to help build the judo federation, in a region which is considered as the Cradle of Mankind. We met Johannes and Regina and asked them to tell us about their experience of teaching judo in developing countries. 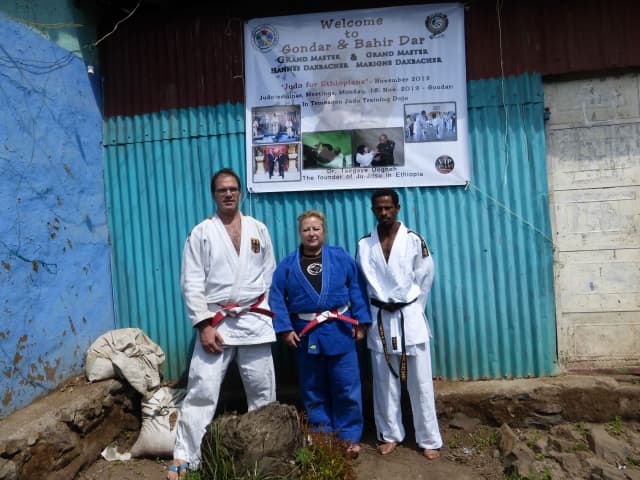 Johannes Daxbacher was 9 times in Ethiopia between 2010 and 2018 and in 2013, Regina joined him for an unforgettable journey. There they have been working actively with Dr. Tsegaye Degineh, patron of Ethiopian Judo, and his team. Daxbacher was also recently invited by the Secretary General of Sudanese Judo Federation, Mr. Salah Musa Altay, to visit the neighboring Sudan (2018).

“When I first travelled to Ethiopia, I had to face many different challenges that were linked with the difficult financial situations of many judo players. When you come from Germany, a wealthy country, you suddenly discover issues that can put people in danger. We have different cultures and mentality and we have to adapt to each other. The lifestyles are totally opposite and people are solving and dealing with problem in an other way than the one we are used to. Sometimes I am happy to see that there is great curiosity and joy to learn Judo. Other times it's a bit more challenging, because people don't know what it is. But the biggest issue for me was the lack of equipment", said Hannes.

"After more than ten years of going back and forth, we are pleased to see the positive evolution. There are now judogi and tatamis thanks to the support that we received from German Judo clubs and from the German Embassy in Addis Ababa. Boys and girls can now play and learn judo together, leaving their slippers on the edge of tatami. They have good qualified coaches. Ten years ago there was no judo. This is a great feeling", added the German expert.

Today judo in Ethiopia is seen as a noble and esthetic activity, practiced by children, men and women, policemen and others: “We have the feeling that people are coming to judo, because they know that they will learn great values on the tatami. The dojo looks like a protected area where safety and security are the key words. The judoka believe that by practicing judo, they will have the benefit of a peaceful environment and that is actually true. The Ethiopian judo family is great. With the support of many people, also from abroad, we are able to build a great friendship that goes beyond all borders", both Hannes and Regina said. 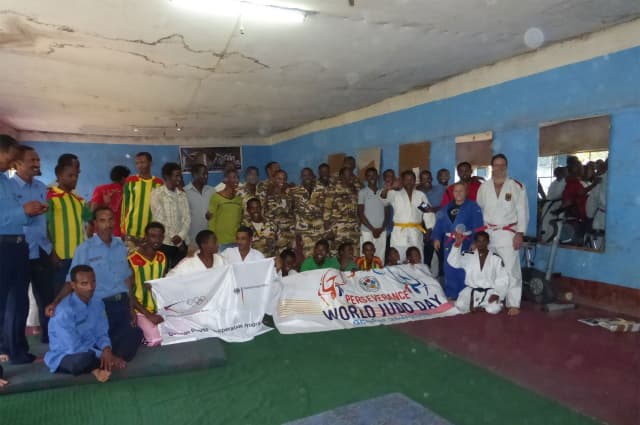 When it comes to cultural differences, gender equity is a crucial subject, but once again, based on his experience, Johannes believes that everything is possible: “Once again, we have to adapt to the local habits. It is different to teach judo to women in Ethiopia than it is in our home country for instance. But I can feel that Ethiopian women appreciate judo and they appreciate even more when they can practice. Before I first went on the tatami with women, I tried to know if I was allowed to touch them, as judo is a contact sport. I am very careful not to hurt anybody's feelings. This is a key point to build a better and more understanding society. I believe that it is very important when we can have mixed training sessions.“

Regina added: “I do agree and for this reason, it is really great, when female judo coaches can teach women in those countries. I can tell you that it was amazing to be on the mat with my husband in Ethiopia to share our teaching methods.“

When judo is mainly perceived as an activity for men and hardly accessible for women both think that it is very important to show as much as possible that judo is different and that the doors of any dojo will always be open without any kind of discrimination: “The more there are female judoka on air, the more people, and especially women themselves, will understand that they can come to judo. Ultimately people will see that as a normal situation. When we went together in Ethiopia and the judoka discover that I was on the tatami with Johannes as a female judo coach, suddenly we sow more women coming in and up to 50% of the participants were young girls and women.“

Regina takes her coaching role very seriously: “I see it as a highly serious task. I when people to get excited about judo. I want them to enjoy and to help them to develop their self-confidence, but also to learn respect and other judo values. For me it's really not a problem to have both genders of the tatami. It's actually very good because as a female coach, I can demonstrate that I am also very skillful. It helps the guys to understand what rôle the women can play, not only on the mat, but in the society. I always try to help the women to overcome the typical 'women's fear' because I believe that it can improve their personal life as well. Judo is very useful to escape from the 'victim-role'. Women can also start to solve and organize their lives like men, despite different cultural backgrounds. I get a lot of questions from women when I'm in the dojo. It is like a 'woman to women' understanding. Through judo, women have the chance to change their lifes in a positive way, and maybe they will also teach Judo to younger students one day.“ 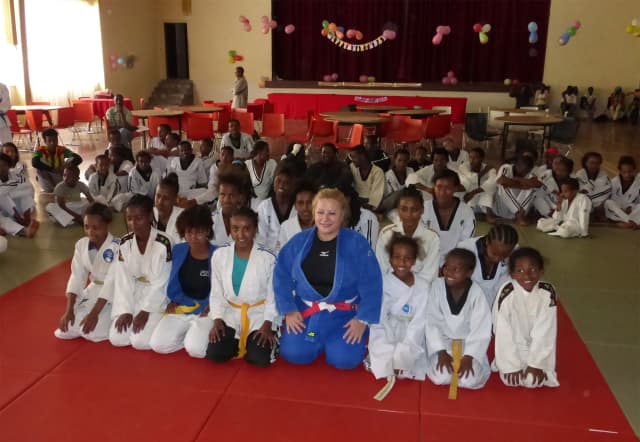 Being a husband and wife on the tatami looks a bit unusual but both are totally clear with it: “We are used to this feeling, because we have been teaching together in our Judo club Polizeisportverein Königsbrunn since 1990, as well as in a lot of seminars. We can exchange our roles (uke, tori) more or less immediately, as the conditions are requested by our judo students. We also know about the different roles 'female teacher' and 'male teacher' and we know how to look at those roles with our respective eyes. We share the tasks and that works pretty well. If one of us is leading the class, the other one is free and can interact with the students.“

Coming back to the gender equity subject, Regina added: “I think that empowering women in sport is not only important, it is vital to improve the female role in the society and to fight against the motto 'women are the weak gender'. Women have an important role in the society. Think about it. 50% of the parents are women – and parents are soooo important for children and the future of our mankind. Furthermore, women have to learn to fight for the (Judo-) values and also know how to get protected by those values like respect.“

"Over the years, we have seen a really positive impact on women. After a while, they are not any more seen as weak and as victims. They learn how to say 'STOP' even in their domestic relationships. Judo is definitely growing self-confidence, which is so important to survive in the social world', observed Hannes. 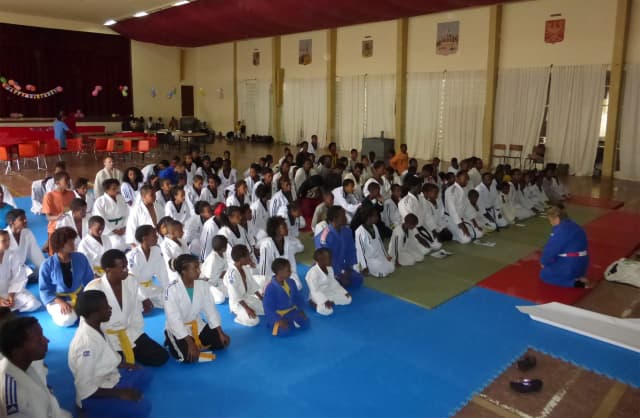 Gender equity has become a major subject in Ethiopia. Dr. Tsegaye Degineh, who met the Prime Minister of the country explained: “The Prime Minster Abiy Ahmed reshuffled his cabinet and there are now 50% female minsters in our government. Women are the pillar of the society and the means of our existence. Women are 43% of the world’s agricultural labour force besides taking care of the family. In Ethiopia they are working 16 hours a day, walking three hours to bring water every day. They are carrying child to give birth, carrying child after the birth while working, carrying fire woods, carrying water, carrying their husband's farming equipment, carrying, …. cooking and feeding the family, they are the primary caretakers of children and elders,… I learned in my job that the struggle of women for gender equality should be also the struggle of men. That the reason why I have a high appreciation for my friends Regina and Hannes on their involvement in the Judo particularity focusing on gender equity. We've started to see promising talented female Judoka in Ethiopia.“

In neighboring Sudan, he had many adult beginners on the tatami. In his opinion, these people and especially the women are a fantastic treasure for the future judo development. They were happy to learn judo and he saw that they were playing and learning with great emotion and happiness. Hannes would not be surprised to see some of those women becoming really good teachers in the future: “With women we have more development-power and a development not only with 'male eyes'. Women are solving problems with less aggression, they have another conflict resolution potential. If they are not considered as potential victims, there will be less violence and it will help for a more peaceful society. Our judo-values are crucial for it!“, concluded Hannes.

Johannes and Regina Daxbacher are planning on going back to Ethiopia in 2019 to work with the federation on the next important steps.

Development
Rwanda is Banking on Women