Inside Judo’s Toughest Course – Kangeiko at the Kodokan

Written by Mark Pickering on 27. Jan 2018
Share
Kano Jigoro shihan had a vision for judo, for the martial art that he created in 1882 as a 22-year-old to be disseminated across the world. Fast forward 136 years, from that time, and the International Judo Federation, the Olympic sport’s world governing body, counts 196 countries and five continental unions as its members and 26 of them won medals at the Rio 2016 Olympics Games.

The sport is more prosperous than ever, the champions are household names and alongside them judo's values are making a genuine difference to societies. Through all the progress there remains one constant that everyone who dons a judogi, in any dojo in the world, is mindful of and it remains with them beyond their time on the mat.

For all the progress, home, for the sport, remains the same mystical, magical location.

This is one dojo where an address is not needed. If you are in the area you will spot the prominent sign posts guiding you to the eight-story building awash with judoka, artifacts, and the best teachers of the art which is meticulously persevered and rigorously practiced every day.

Nestled between a urban entertainment park which houses restaurants, shops and an amusement park and a 25-floor government building sits judo's mecca. 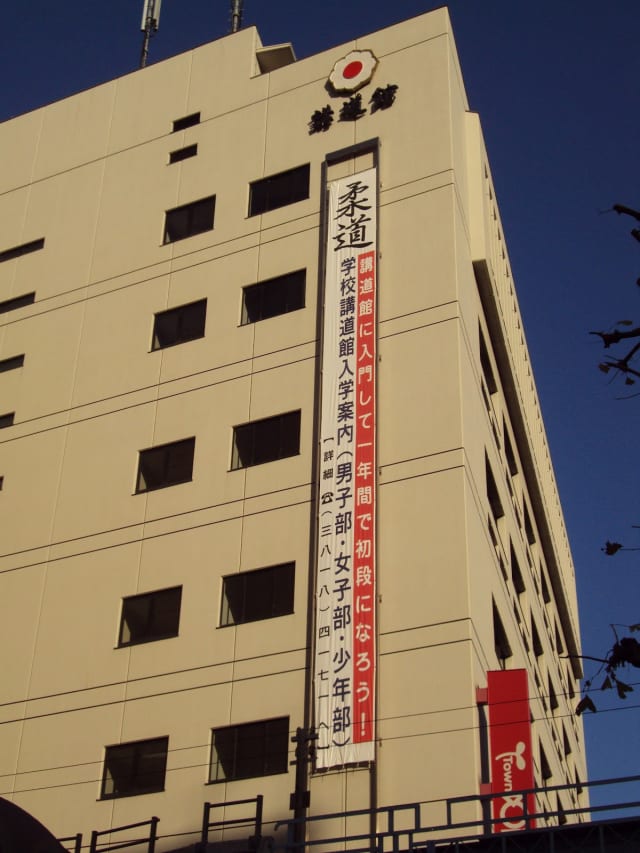 From approaching on one side you can see the centre's logo, an eight-sided white mirror showing purity and softness with a red iron circle in the centre, which shows that gentleness can control force, and is as meaningful and insightful as the famous building itself.

If you approach from the other direction, a busy cross road junction, with typically convenient access to the city's world-envied rail network, you will be greeted by a sight that will stop you in your own tracks. One of the city's most photographed statues depicts a pioneering educator, slight in size, yet peerless in terms of influence, with humble beginnings from a sake-brewing family, to a fast learning jiu jitsu practitioner, to being the first Asian member of the International Olympic Committee and of course, most crucially the founder of judo: Jigoro Kano. 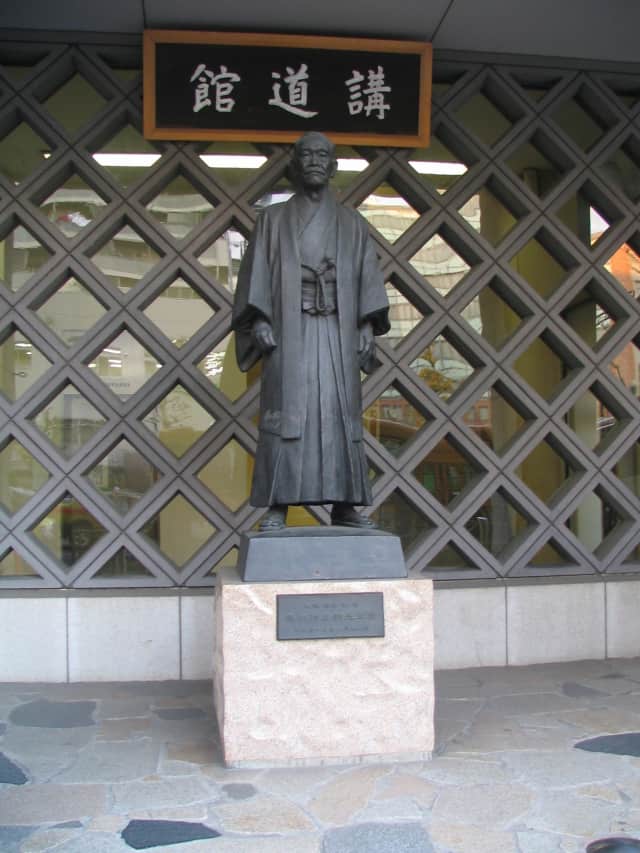 Home for judo, home for Jigoro Kano's educational tool, martial art and Olympic and Paralympic powerhouse is the Kodokan Judo Institute in the Bunkyo neighbourhood on Tokyo, Japan.

Not just a spiritual home, but a practical and theoretical base for judo in the world, the Kodokan, which houses a shop, a hostel, a library and museum and multiple dojo's from the fifth to seventh floors, remains at the heart of the sport and on every judoka's bucket list.

Every January a mix of hardened international judoka, acclaimed Japanese masters, unsuspecting but humbled young judoka and every level of practitioner in between descend on the world's most famous martial art centre for a 10-day winter training course that torments the soul, stings the body and overworks the mind - and all before the sun is up, in the very land of the rising sun - to justify the most gruelling start to a year for a judoka. And yet it always leaves you wanting more.

This is Kangeiko (Mid-Winter Training), the Kodokan's festive onslaught and the first event in its stacked annual calendar. A form of Kangeiko is also held in Universities in Japan, albeit usually a shorter form, and there are some international versions but the Kodokan edition is the most famous. 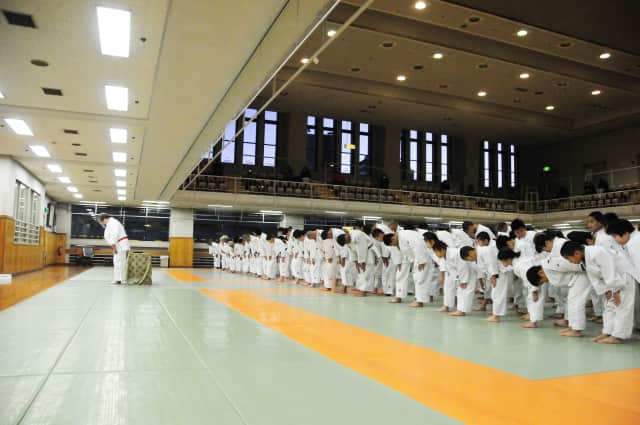 The course started in 1884 - originally with a multiple-week format - and is aimed at developing your body and spirit through the harsh winter conditions. Kangeiko training is held from 5:30am to 7:30am for 10 consecutive days and is a challenge of intestinal fortitude for all judoka.

Rising out of bed before the sun is up is just the start. Those living in Japan will take the first trains of the day, flush with the homebound revellers of the night, to practice their art before going about their usual working day. 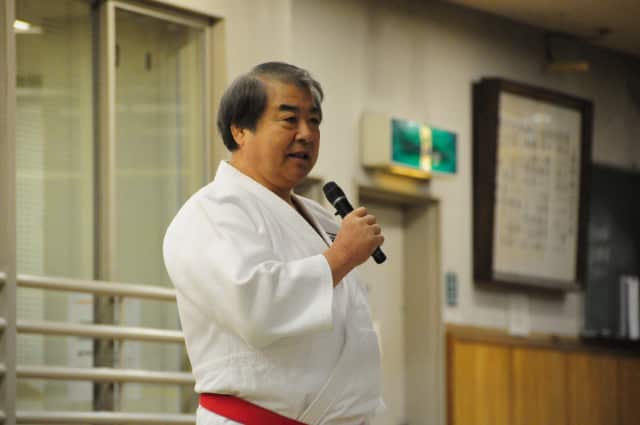 Most international judoka will stay at the Kodokan hostel on the third floor of the building. There are a handful of dormitories which are usually full with international teams and several private rooms are also available.

For those residing within the sport's most famous venue, their night's sleep and all it's comfortable conditions is abandoned at 5am, as the alarms begin to ring out and the sound of zori (flip flops) clip-clopping in the corridor acts as a second alarm as the devoted start to rise at their place of morning worship.

You are immediately confronted with the biting conditions but an immaculate white judogi awaits, and, for some, transforms them towards feeling like a modern day samurai, while for others, a judogi is simply the personal garment that they feel most comfortable in.

Kodokan-based judoka walk from the third floor to the fourth floor reception and store their zori, before they process their entry cards. A shivery amble takes you from the fourth to the seventh floor dojo, with the sounds and shudders of the main dojo growing with every step.

A sea of humanity greets you at the dojo, all dressed in white - in what is as pure and as pleasant a sight as you can see in the sport - with all colours of obi, but most being white, black and red, all briskly running around the outskirts to get the blood flowing and loosen up for the two-hour session. 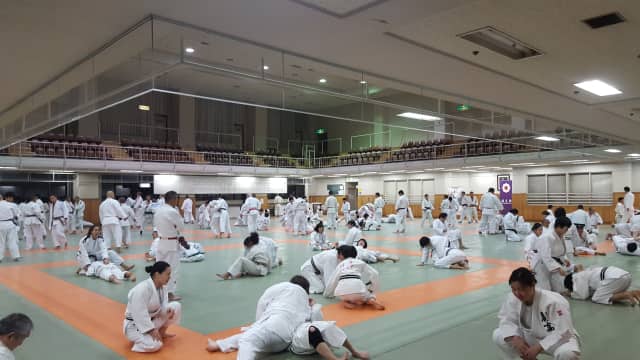 The official warm up starts promptly at 5.30am and is of course led by one of the children who can be heard right across the dojo as he names the exercises and counts in Japanese the number of repetitions.

The body is initially adverse to this early manipulation, but after some movements such as hindu push ups, a specialty in Japan, press ups and sit ups, the external temperature reaches a comfortable level.

Sensei Mukai Mikihiro, who was one of the first instructors of Olympic champion Baker Mashu and worked with him when he was a child for many years at the Kodokan, calls time on the warm up after a thorough full-body heat-up.

The session splits off with a boys and girls class, an adult white belt group, a women's class and a men's class while a host of Japanese greats dot the sidelines and cast their expert eye over proceedings while regularly selecting a lucky partner to engage in some uchi-komi.

After a roll call for all judoka at 6:30am, to check the daily attendance, the session opens up and the majority will engage in randori.

As the sun rises up, by now, the sweat falls down onto the hallowed tatami, and after a seated bow from both uke and tori towards to the chair of Jigoro Kano and then towards each other, the pairs move out into the tatami, each looking for an ample amount of space to employ their skills and show the artistry of their craft.

The diligence of the Kodokan instructors leads them from uchi-komi to uchi-komi and randori to randori as they offer their body and mind for others to learn and grow.

Veteran Japanese black belts are cheerful and playful as they administer a ne-waza masterclass and engage with domestic and foreign judoka. After bowing to close out free-sparring there is always a warm exchange which goes beyond introductions and shows genuine interest about your background, judo history and why you too are, like them, passionate enough to enlist in Kangeiko.

As the glare of the sun marauds through the dojo, the sprung tatami feels, at that time, as one of the most crowded spots in the city. As you step off for a moment to hydrate and regain your breath, you are treated to the magical sight of a full tatami with judoka from the age of 5 to 95, from a white belt to a 10th Dan, from Japanese to New Caledonian, Turkish and Welsh judoka and everything in between.

The beating of the drum to mark the end of training always catches you off guard as it ends your early morning endeavours and the satisfaction creeps in with the realisation of having started your day with two hours of exertion at the home of judo.

Plans for breakfast are promptly made, with those you know, and those who you just met and only moments ago were attempting to throw. After your first post-training hot shower, the least painful of your stay, the day is yours to do as you please in the capital city which mixes the ultramodern and the traditional, from neon-lit skyscrapers to historic temples.

Jigoro Kano said regarding Mid-Winter Training: "It is easy to have difficulties and troubles on the way, but they can only be able to get through with indomitable spirit and with the great care."

With every day, comes new challenges, as the body creaks up the stairs and the growing soreness is amplified in the extreme cold. But for all those ailments there is vivid moments of inspiration that only Japan and the Kodokan can produce and with them your mental toughness surges with every session.

Moments such as 95-year-old 10th Dan Abe Ichiro doing some light uchi-komi having walked up all the flights of stairs to the main dojo on the 7th floor, Sydney 2000 Olympic champion Huseyin Ozkan randomly turning up with his latest student, or reigning IJF Veteran World Championships winner Komuro Koji showing up and sharing his ne-waza tricks to a crowd of engrossed Dan grades, or spotting a backpatch of a compatriot from your far and distant land, or after day nine of training Inoue Kosei and his latest charges engaging in randori with the Kodokan members for the traditional Kagami Biraki. There is inspiration all around you.

After day 10 those with a perfect attendance are awarded a Kangeiko certificate by their respective Kodokan instructor having completed an experience that will remain with all participants for life and will be something they can draw in during future challenges both in and outside the dojo.

This year 324 judoka registered to participate in Kangeiko including 37 international judoka from 27 countries.

Over half of the participants completed the course with 183 judoka spending their early morning on the seventh floor of the Kodokan including 22 international judoka. 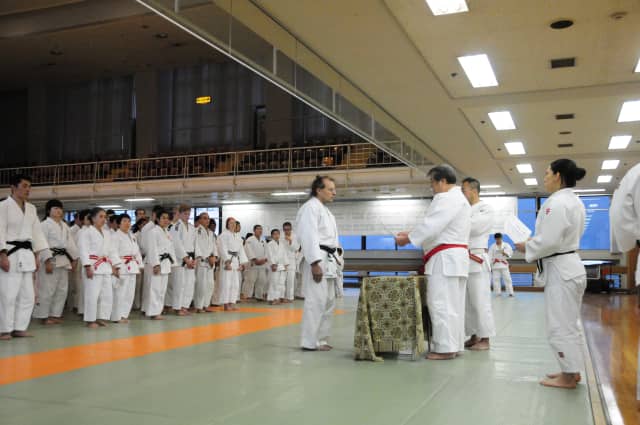 It's not just every January, for 10 days, that the Kodokan opens it doors to the world. That's the time when judoka embark on a trip of a lifetime with the Kangeiko course in mind but in truth judo's home dojo is there for all its practitioners from every dojo in every nation and is ready to welcome anyone and everyone. 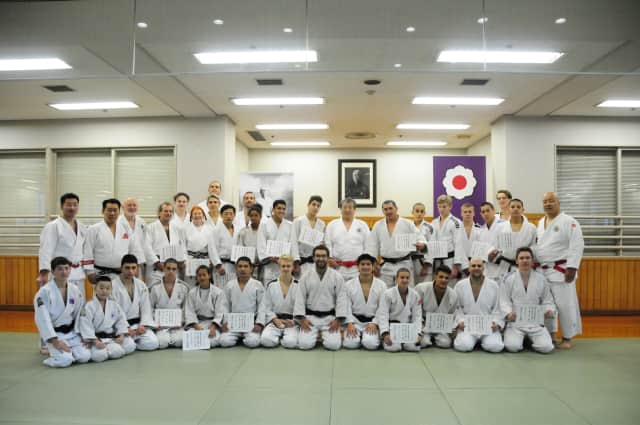 The international participants at #Kangeiko2018

As the official training venue for the Tokyo 2020 Olympics, the Kodokan, is not only at the core of the sport but will be at the centre of the next Olympiad which is what it deserves, for a sport, a nation, and a visionary creator who have all so much to the Olympic movement and to society.