Written by Mark Pickering on 04. Mar 2017
Share
The Japanese national team’s all-conquering coach Kanamaru Yusuke was unveiled to the public and judoka at the national dojo in Wales on Saturday having arrived for a one-year stay in the capital city of Cardiff.

Former world silver medallist and a world-renowned coach of Olympic and world champions, Kanamaru, 37, led Ono Shohei to gold at the Rio 2016 Olympics and Nagase Takanori to bronze.

Tsukuba University graduate Kanamaru, who arrived in Wales on Thursday after the post-Dusseldorf Grand Prix training camp, was presented with a Welsh rugby shirt on Saturday as members of the British Judo Centre of Excellence joined the Welsh contingent for open randori at Sport Wales in Cardiff. 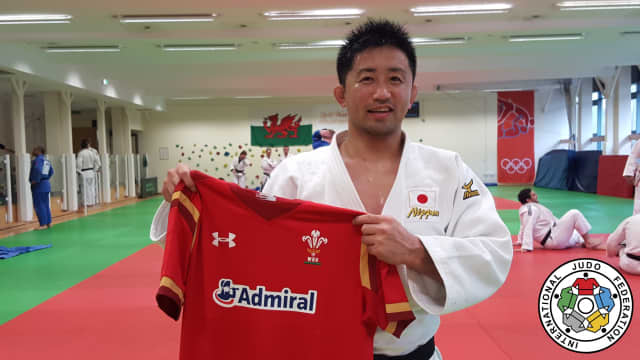 The former -73kg ace, who himself took part in the randori, will work the highly-talented young Welsh team over the course of the next year while studying English in the city and will link up with the Japanese team at major events.

Kanamaru said: “I am very happy to be here and very excited. I am impressed by the national dojo and I thank everyone for their warm hospitality.”

Darren Warner, Welsh Judo Association Chief Executive Officer, said: “It is a great honour to welcome Kanamaru Yusuke to Wales. Kanamaru is one of the most successful and sought after coaches in the world. We are delighted that he is here and look forward to working together.

“I would like to thank the Japanese Olympic Committee and the All Japan Judo Federation for their collaboration with us and their support.”