Written by Nicolas Messner on 23. Jan 2020
Photographs by Gabriela Sabau
Share
Some events are more anticipated than others, some athletes more observed than others. What is certain is that all the events on the World Judo Tour are now of great importance in the race for Olympic qualification. This applies particularly to the Tel Aviv Grand Prix, which opens an exciting Olympic season and whose first day of competition has just ended with the gold medals obtained by Japan (2), Korea (2) and Slovenia (1). 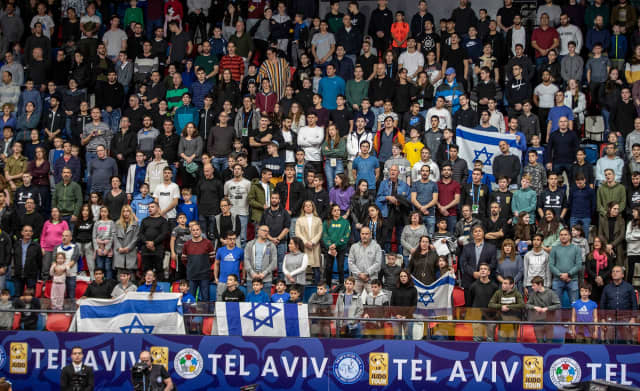 From 8:30 am on Thursday January 23, the female categories -48kg, -52kg and -57 and male -60kg and -66kg trod the tatami of the Shlomo Group Arena, each square centimeter of which breathing and pulsing at the rhythm of the judo throws.

In front of an enthusiastic and knowledgeable audience, supporting local athletes as well as international champions, the crème de la crème of world judo met in Israel for the second edition of the Grand Prix, in a country that no longer has to prove its expertise in judo.

During the opening ceremony, young gymnasts and Japanese drummers performed and the competition was officially declared open. The IJF and Israeli anthems played.

Mr. Moshe Ponte, President of the Israel Judo Association, declared: “My best appreciation goes to the IJF and its President, Mr. Marius Vizer. Thank you for all your support through friendship and love. This year 84 countries have come to Tel Aviv and for us it's an amazing event. We are proud to host you and I'm sure you'll enjoy the Israeli hospitality. Leaders from dozens of countries are in Israel on the occasion of the International Day of Commemoration in memory of the victims of the Holocaust. We will never forget and we will do our best to fight any kind of antisemitism and discrimination. Welcome to Israel and good luck to all the participants."

The CEO of the Ministry of sports, Mr. Yossi Sharabi said: “I want to wish good luck to all athletes. I wish you wonderful time in Israel.“

Mr. Sylvan Adams, co-host of the Tel Aviv Judo Grand Prix added: "Good luck to all participants. It's happening on a very special day. With the celebration of the 75th anniversary of the liberation of Auschwitz-Birkenau, we are here at a sporting event to show our best and to build friendship. Let the games begin.“ 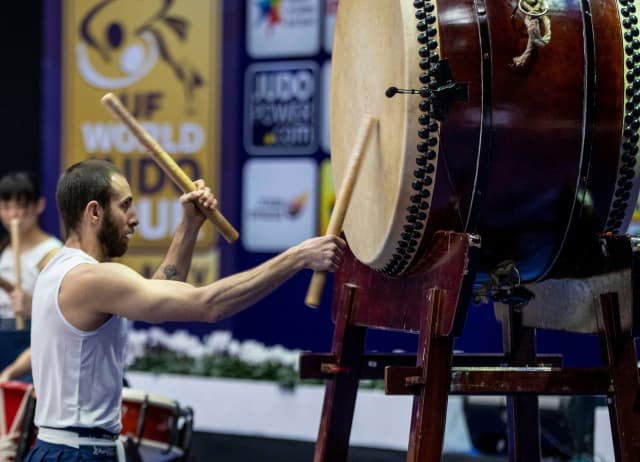 Mr. Vladimir Barta, IJF Head Sport Director, concluded: “In the name of the IJF President, Mr Marius L. Vizer, it is my pleasure to welcome you all to Israel for the first Grand Prix of this Olympic year. Tel Aviv is hosting for the second year in a row an IJF World Judo Tour event. Hundreds of world class athletes are here to offer the best judo show. Last year's edition was a great success and left everlasting memories to all participants. In 2020, we can count on even more delegations and athletes who are looking for points and honours. I wish them good luck! I want to congratulate the Israel Judo Association, the government of Israel and all the sponsors for organising such a great event. Thank you for all the efforts to make Judo the best application of mind and body.“

The first final of the day opposed the winner of the 2018 World Masters, TSUNODA Natsumi (JPN) with the silver medallist of the 2019 World Judo Championships, Shirine BOUKLI (FRA). At the halfway point, each athlete had been penalised with a shido for avoiding the grip. Not at all impressed by her elder, the young French advanced on TSUNODA, but forgot to attack and was penalised a second time. However, Shirine BOUKLI has to learn fast at her expense, that the Japanese are particularly precise and strong on the ground. TSUNODA could keep the mask of victory, imperturbable, as she had just applied an unstoppable armlock on which BOUKLI had to give up. 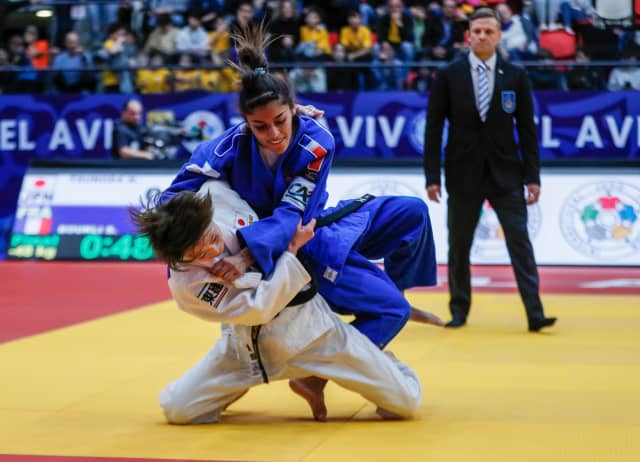 The very first match of the final block, on Day 1 of the Tel Aviv Grand Prix 2020, opposed Tugce BEDER (TUR) and Milica NIKOLIC (SRB). The first to be dangerous was the Serb, performing a drop shoulder movement from which the Turkish judoka escaped at the last moment, to avoid the Waza-ari. More powerful physically, NIKOLIC seemed to have the measure of her opponent, but was still penalized a first time for passivity, while BEDER took the upper hand on the ground. The match was balanced and approached golden score, even though NIKOLIC was again penalised. It was only after 1:22 of additional time that Tugce BEDER found the opening on a counterattack to win the bronze, her first medal at a Grand Prix.

In the second bronze medal contest, 2012 Olympic bronze medallist CSERNOVICZKI Eva (HUN) faced the 2019 Tbilisi Winner Melanie CLEMENT (FRA), who in 2019 defeated the double world champion, Daria Bilodid (UKR). CSERNOVICZKI was quickly penalised because of a prohibited kumi-kata below the belt. The two perfectly fitted guards, between the left-handed CLEMENT and the right-handed CSERNOVICZKI, turned to the advantage of the Hungarian who on the edge of the tatami launched a powerful koshi-guruma, for a first Waza-ari. But keeping all her concentration, CLEMENT followed a few seconds later with a perfect tani-otoshi and a clear ippon. 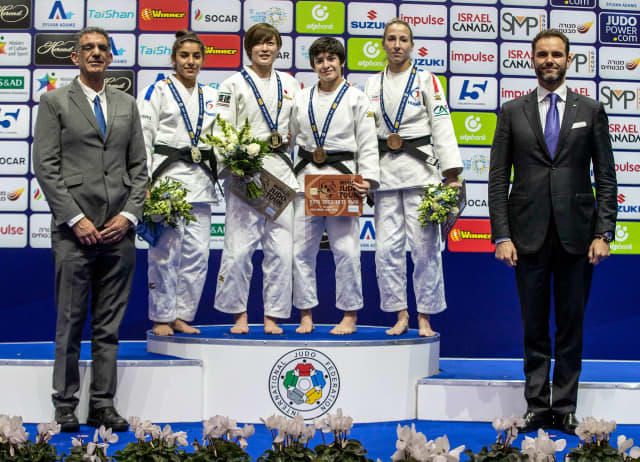 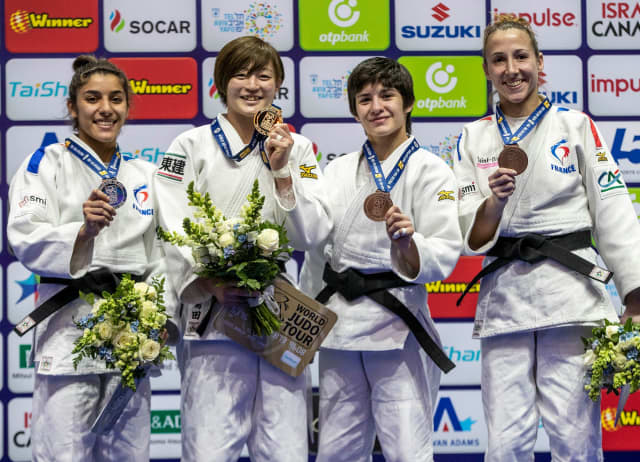 It was a 100% Asian final that we witnessed, with JEONG Bokyeong (KOR) and MAEDA Chishima (JPN) qualified to climb onto the highest step of the podium. The battle for kumi-kata was fierce for much of a knife-drawn final, but it was MAEDA that finally won after impeccable Japanese ground work once again: ippon after an immobilisation. 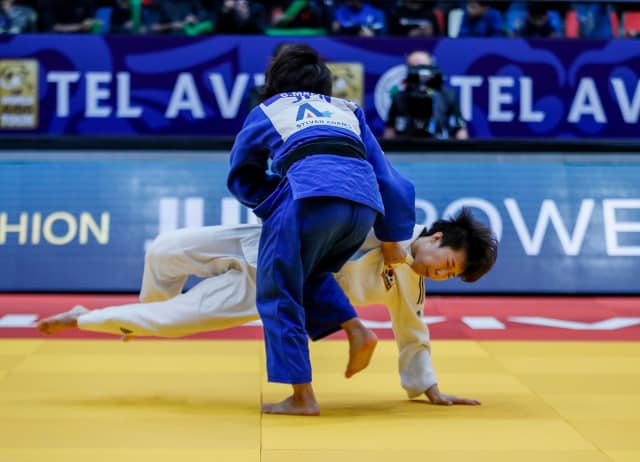 The first bronze medal in the category was contested by Anastasia POLIKARPOVA (RUS) and PARK Da Sol (KOR). It took almost two minutes of golden score to see POLIKARPOVA disqualified after receiving three shidos, PARK winning a new medal for the Korean delegation. 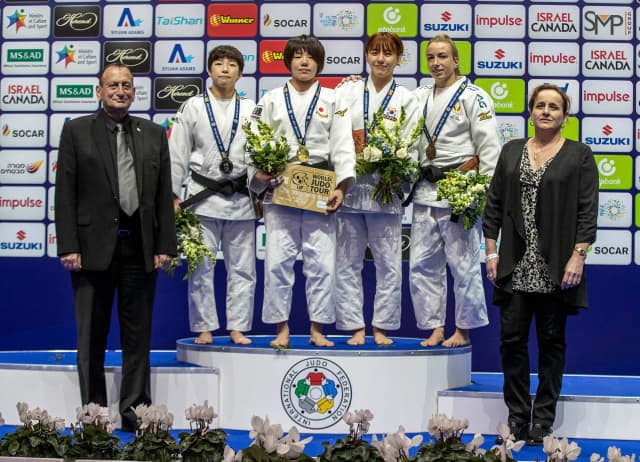 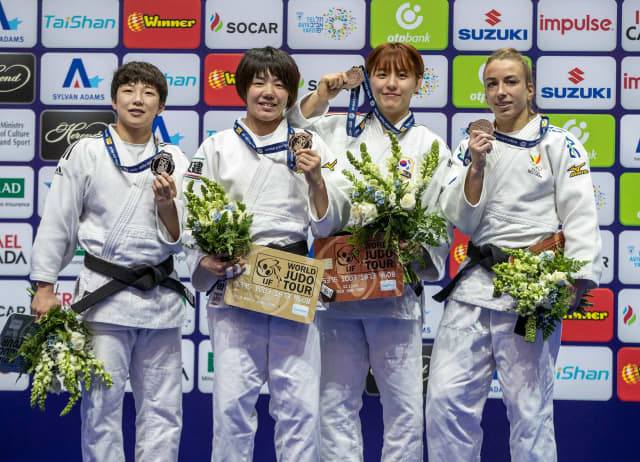 -57kg: KAJZER Wis her Second Gold at a Grand Prix

It took some long minutes of golden score for the victory to finally tip over to Kaja KAJZER of Slovenia against Helene RECEVEAUX of France, on a somewhat confused action initiated by RECEVEAUX but concluded with a counter by KAJZER. 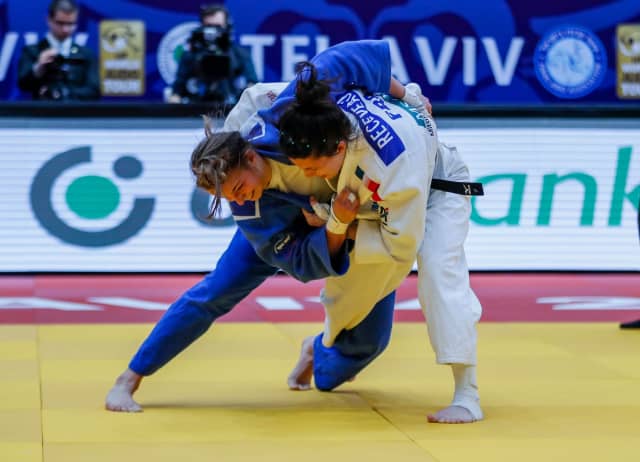 Five-time winner of a Grand Prix gold, Nora GJAKOVA (KOS) was up against the world multi-medalist Telma MONTEIRO (POR) for a place on the podium. GJAKOVA was in full control of her opponent and initiated the first action to score a masterful Waza-ari, very close to ippon, with harai-goshi. The Kosovar then only had to control MONTEIRO until the final gong, to win a twelfth medal in Grand Prix. 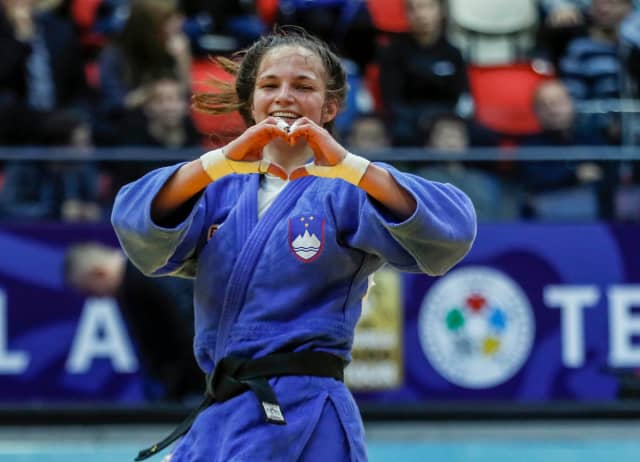 In the second bronze medal match, Anna BOROWSKA (POL) was up against KARAKAS Hedvig (HUN). The Hungarian quickly took the lead and then her opponent launched an attack which was countered for a second waza-ari. There was a moment of hesitation however because the refereeing table seemed to want to cancel this second mark, which was done a few seconds later, to actually disqualify the Polish for a dangerous action as she had dived on the head. With this bronze medal, KARAKAS Hedvig wins her 18th medal in Grand Prix. 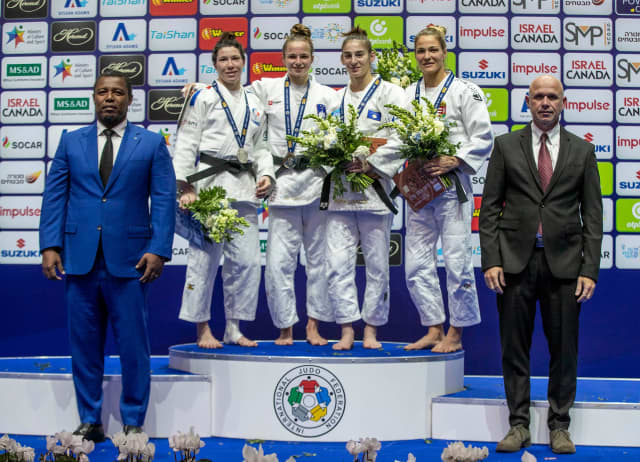 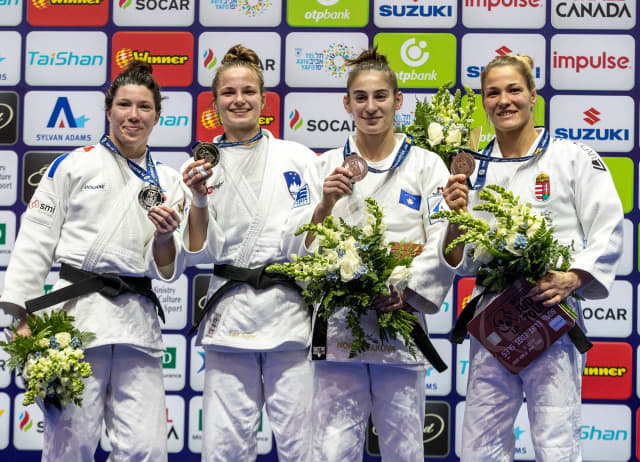 The first men's final of the day was between Mihrac AKKUS (TUR) and KIM Won Jin (KOR), demonstrating the high quality of the Korean team engaged in Tel Aviv. The first powerful attacks, while the two athletes were in perfect control for a while, came from KIM's side, with a sasae-tsuri-komi-ashi on the left, followed a few seconds later by a counter in o-soto-o-soto style, from which AKKUS miraculously escaped. It is therefore with a simple shido registered on the scoreboard in the Turkish corner that AKKUS and KIM entered golden score. Two shidos later, AKKUS saw his golden dream fly away when he was penalised twice for a cross-grip, offering KIM the sixth gold medal in a Grand Prix. 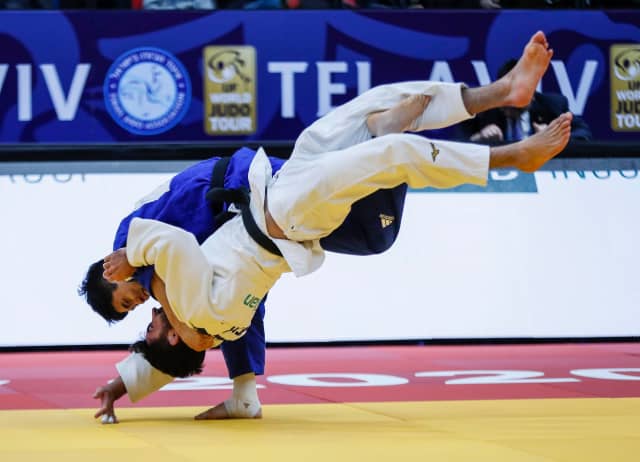 The first bronze medal match saw LEE Harim (KOR) and AOKI Dai (JPN) opposed in a 100% Asian confrontation. Halfway through the match, AOKI Dai, once again demonstrated the supremacy of Japanese judo on the ground, carrying out meticulous work towards an armlock, to win his third medal on the Grand Prix stage. 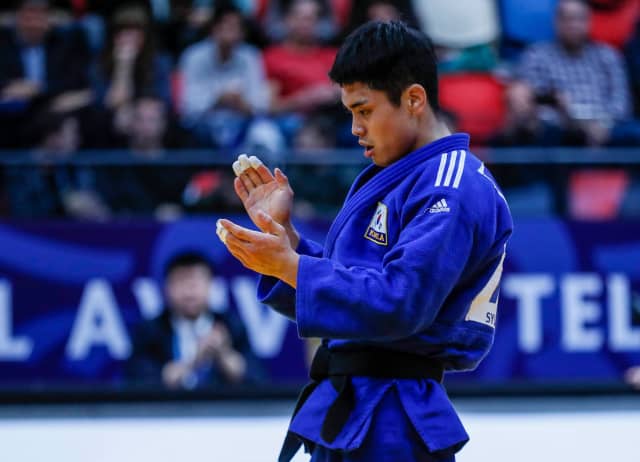 In the second bronze medal contest, Hakberdi JUMAYEV (TKM) faced Nicolae FOCA (MDA). At any time, the match seemed to be able to tip over to one side or the other, the two athletes taking all the risks to score, but like felines, they escaped each attack with agility. Despite relentless attacks from both sides, FOCA ended the four minutes of regular time with two shidos to his credit, after committing two fouls. But that is perhaps what gave him the little extra will to win when JUMAYEV seemed to be looking for the third shido. Working in construction in Israel, without having the opportunity to train as much as he’d like, he obtained his participation in the Grand Prix at the last moment. The least we can say is that Nicolae FOCA patiently built his victory by executing at the end of the effort a perfect ippon-ko-uchi-gari to get on the podium. 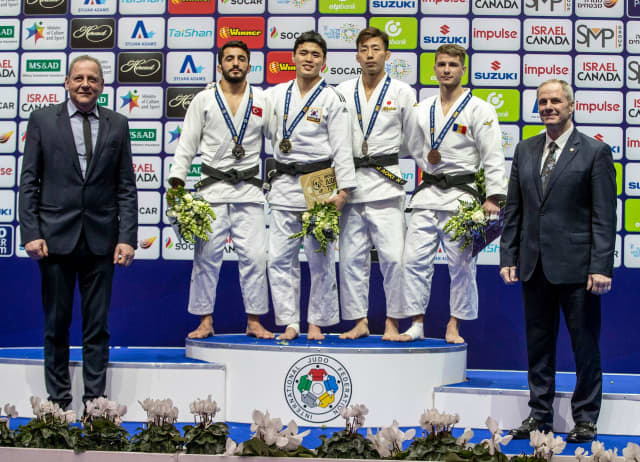 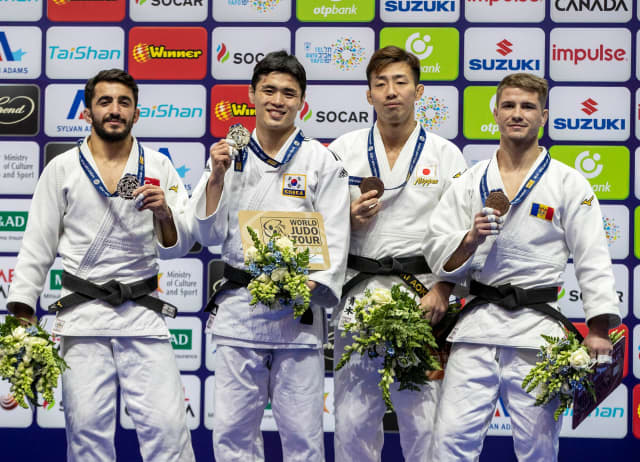 -66kg: An Dominates the Category

The second men's final of the day saw Yerlan SERIKZHANOV (KAZ) beaten by AN Baul (KOR), who after less than thirty seconds scored a first Waza-ari to take a serious advantage on the final victory, which he confirmed a few moments later with a second Waza-ari from a left shoulder throw. 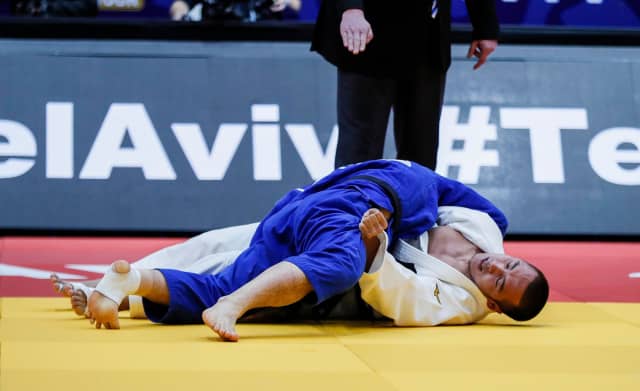 If the audience was watching the final block quietly so far, the whole public suddenly woke up and made their voice heard as Tal FLICKER (ISR) climbed on the tatami to offer perhaps a first medal to the host country. But for that he had to face Yeldos HUMAKANOV (KAZ) and the least we can say is that the match was close and stressful for the athletes, the referees and the public. It was not until the golden score, via a powerful attack on the left, that FLICKER was able to score a Waza-ari which suddenly released a united crowd. 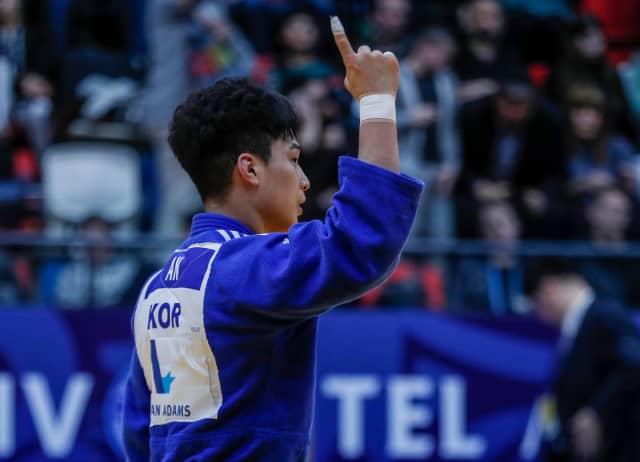 Having barely recovered from their emotions, the public continued with the entry of Baruch SHMAILOV (ISR), due to face the Brazilian Daniel CARGNIN. Once again the match was intense between the left-hander SHMAILOV, penalised twice during regular time, and the right-hander CARGNIN. However, supported by the audience, SHMAILOV found the necessary resources to have his opponent penalised twice and return to equality. After more than two minutes of golden score, the Israeli was again penalised for having held his opponent's belt for too long without attacking. First bronze medal for Brazil here in Tel Aviv. 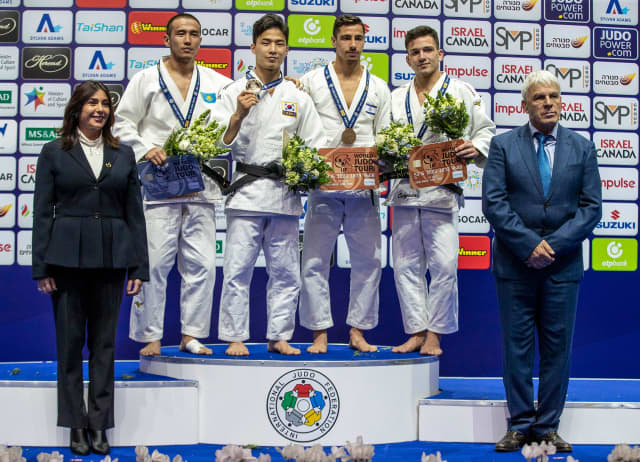 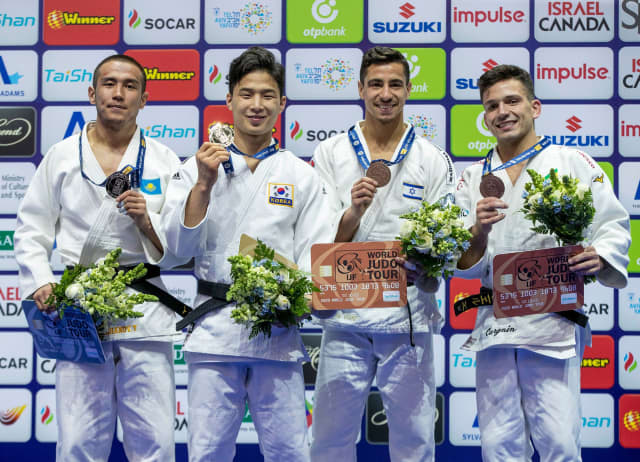