Double world champion Daria BILODID (UKR) retained her Paris crown with victory over Osaka Grand Slam bronze medallist KOGA Wakana (JPN) to improve to 9-0 against Japanese judoka. BILODID, 19, was lethargic in the earlier rounds as she looked drained and had to dig deep to force her way into the final. The teenage sensation emerged reenergised and refocused in the final block as she was a comfortable winner over Japan’s latest -48kg project KOGA. A waza-ari score from a makikomi effort was the difference for BILODID who was applauded and celebrated by the capacity crowd. The stock of the 18-year-old Japanese prospect will skyrocket after taking silver in her first Paris Grand Slam but it sends her country back to the drawing board, as they’re yet to find a player who can defeat BILODID with only several months to go before the Games. 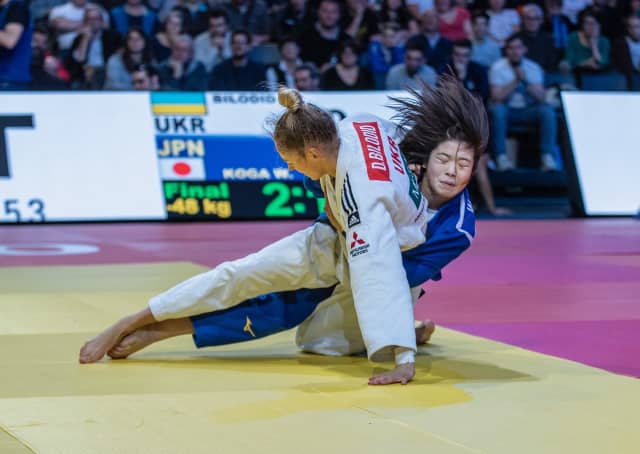 In the first semi-final BILODID survived a nervy battle against Tel Aviv Grand Prix silver medallist Shirine BOUKLI (FRA) who forced the Ukrainian wonderkid into golden score. BILODID showed her character by staying with the task in hand and never folded with the crowd and a new contender against her as she produced the one and only score of the absorbing contest after four minutes of additional time. 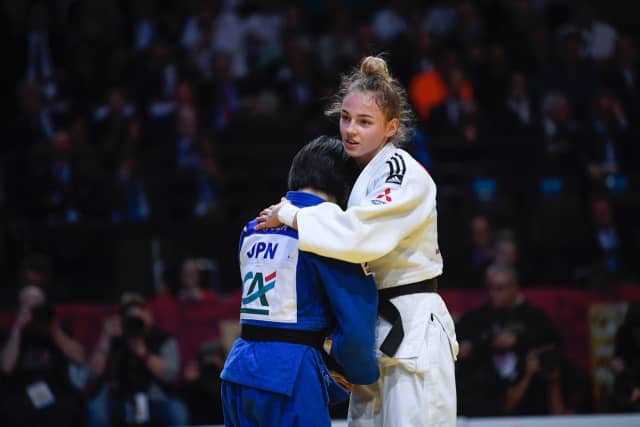 In the second semi-final Tel Aviv Grand Prix bronze medallist Melanie CLEMENT (FRA) slipped to defeat against teenage contender KOGA who countered the home judoka on the edge of the area for a waza-ari score and held down her opponent for 15 seconds to negotiate her way into the final.

The second bronze medal contest opposed BOUKLI and former world champion MUNKHBAT Urantsetseg (MGL) in a first-time meeting between the two and unsurprisingly the veteran Mongolian prevailed with a trademark juji-gatame for ippon. 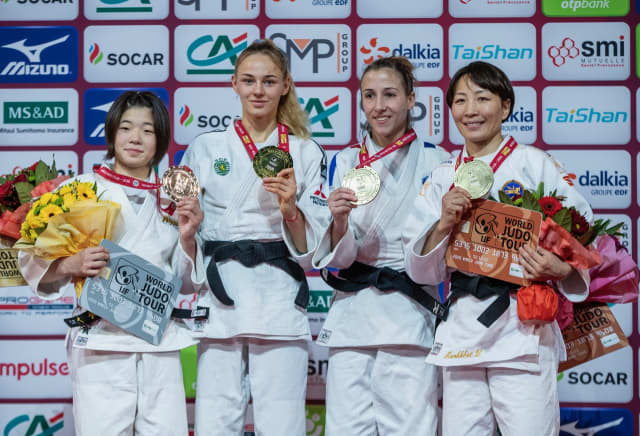 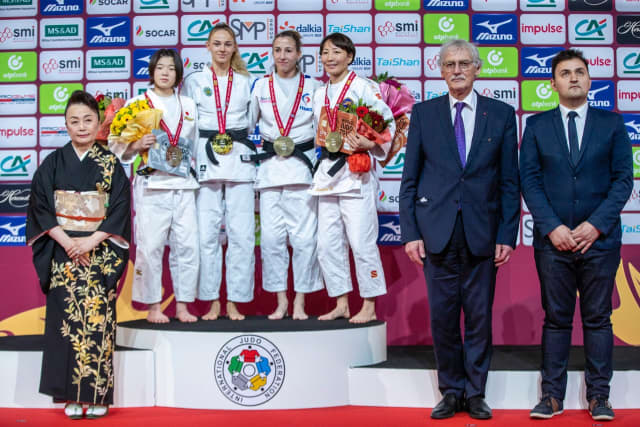 -52kg: Kosovo defeats Italy as KRASNIQI steps in for KELMENDI

World Judo Masters winner Distria KRASNIQI (KOS) defeated Olympic silver medallist Odette GIUFFRIDA (ITA) as a late replacement for her injured teammate and Olympic champion Majlinda KELMENDI (KOS). The talk before the tournament centred around the likelihood of seeing one more chapter in the epic rivalry between GIUFFRIDA and KELMENDI but, after Kosovo’s hero had to withdraw for the second competition in a row, it prompted a last-minute reshuffle by Kosovo’s mastermind Driton TONI KUKA as KRASNIQI made the move up from the -48kg category to instead compete in the -52kg division. 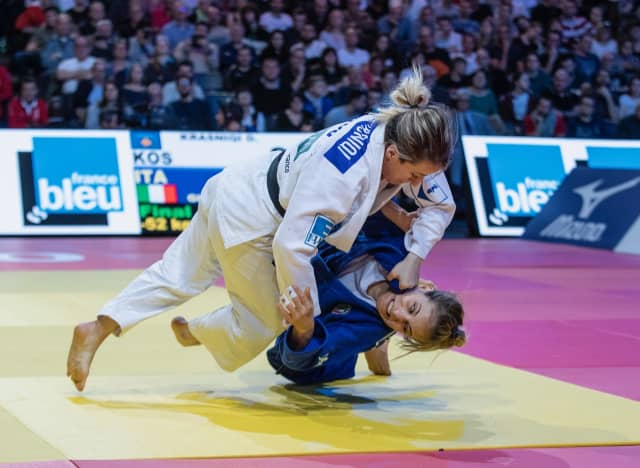 KRASNIQI, who trailed 1-3 in her head-to-head series against GIUFFRIDA - having long flirted with the heavier division before firmly settling back into the -48kg category during this Olympic cycle – outfought the Italian as KELMENDI urged her on from the stands. A hiza-guruma from KRASNIQI, who is ranked number two in the -48kg category and number 48 in the -52kg category, gave her a waza-ari score before GIUFFRIDA received her third and final shido for pushing out her rival. 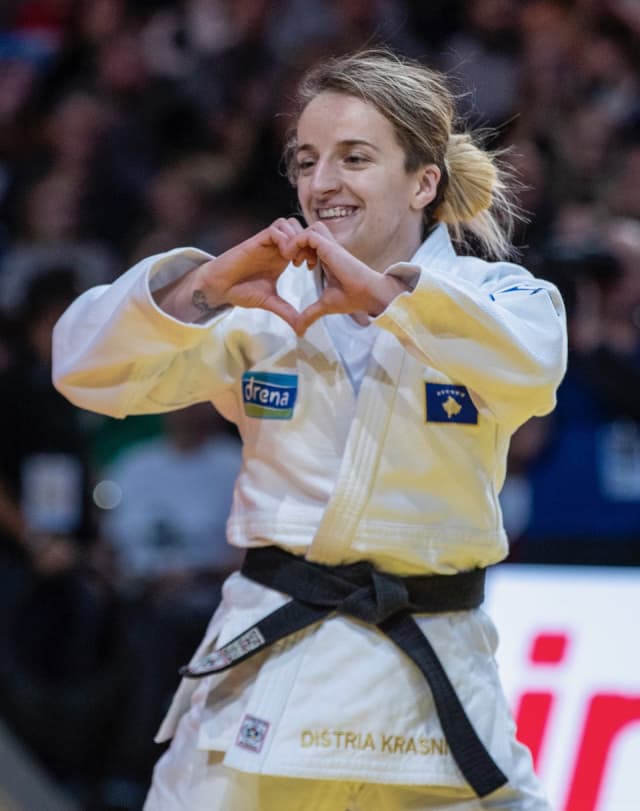 In the second semi-final GIUFFRIDA humbled world number 14 Astride GNETO (FRA) who made three mistakes and was disqualified as the Italian lapped up the result and the jeers of the crowd before disappearing into the tunnel to look ahead to her final.

In the second bronze medal contest MENEZES lost out to her teammate and world number 15 Larissa PIMENTA (BRA) from a low, left-sided seoi-nage, after 15 seconds of golden score, which was awarded a waza-ari score to put the 20-year-old on the brink of selection for her first Olympic Games. 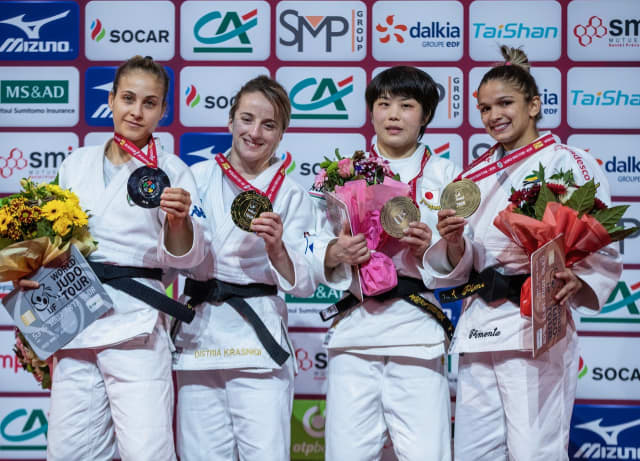 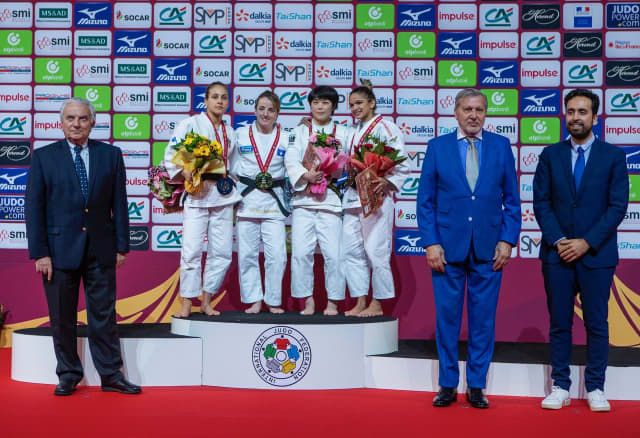 Unstoppable world champion Christa DEGUCHI (CAN) ruled in Paris for the third year in a row as the world number one dispatched former world champion DORJSUREN Sumiya (MGL) in the -57kg final. DEGUCHI earned her fourth Grand Slam title overall by catching DORJSUREN with a tomoe-nage for a waza-ari score and comfortably saw out her advantage to start her season with a customary gold in France. The owner of red backpatch in one of judo’s marquee weight categories took it all in her stride as she marches on towards the Olympics and has undoubtedly been pencilled in as the favourite this summer in Japan where she still resides. 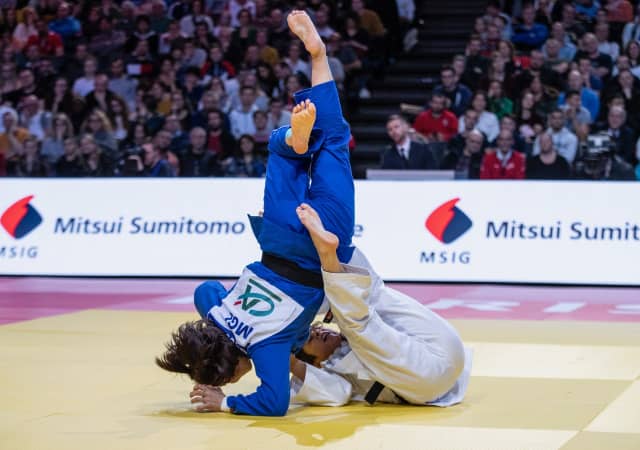 In the first semi-final DEGUCHI defeated world number 10 Sarah Leonie CYSIQUE (FRA) at the halfway point by the maximum score to power her way into the gold medal contest. 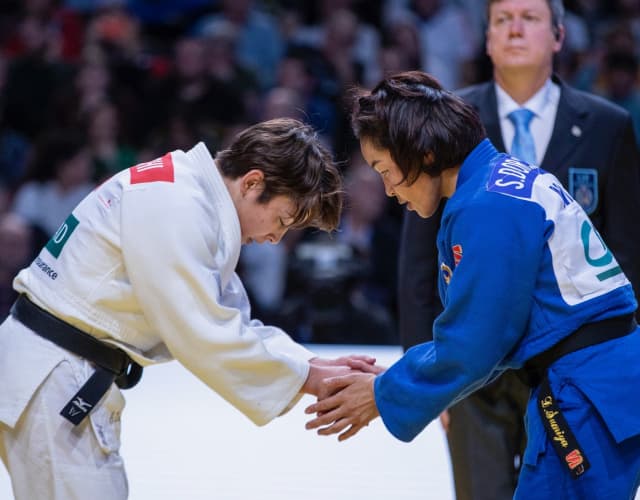 In the second semi-final Olympic bronze medallist Telma MONTEIRO (POR) came undone against DORJSUREN after receiving hansoku-make having narrowly avoided the same fate in her quarter-final.

The first bronze medal was won by world number six TAMAOKI Momo (JPN) as MONTEIRO was unable to compete having been disqualified in her previous contest.

The second bronze medal was won by Tel Aviv Grand Prix bronze medallist Nora GJAKOVA (KOS) who pinned CYSIQUE with a sankaku-gatame for 20 seconds and ippon as Kosovo made a major impression on day one in Paris. 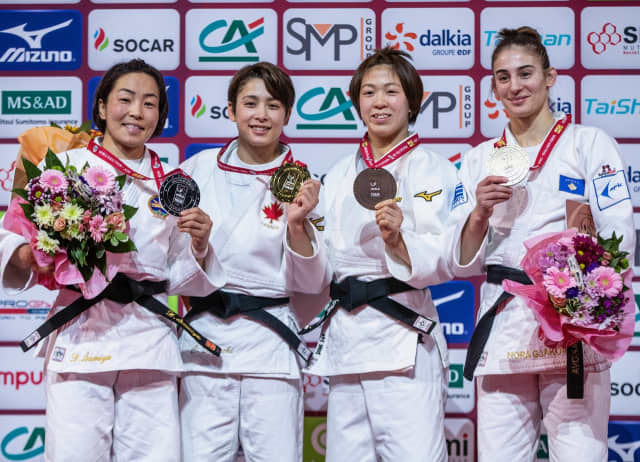 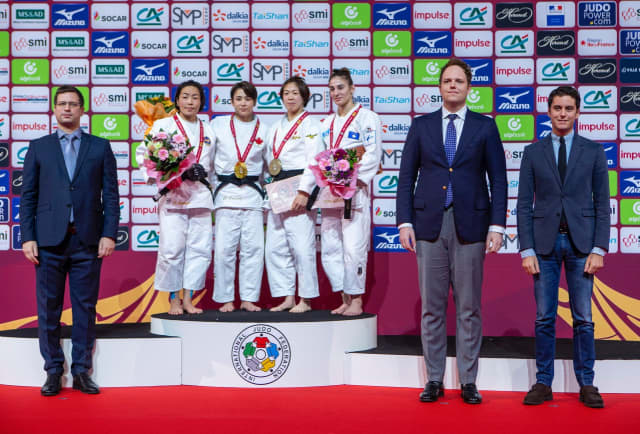 Four-time world champion Clarisse AGBEGNENOU (FRA) appropriately ended day one on a high for the hosts as the leading attraction on Saturday powered to gold. AGBEGNENOU, who was encouraged as always by the familiar and deafening chants of ‘Clarisse, Clarisse’, avenged her World Judo Masters final defeat at the hands of Tokyo 2020 contender NABEKURA by ippon from a ura-nage. The Japanese ace entered the final minute with two shidos already to her name and, to her credit, decided to risk everything and as she committed to her attack the home hero was waiting and sent the crowd into raptures by handing France their first gold medal of the competition. 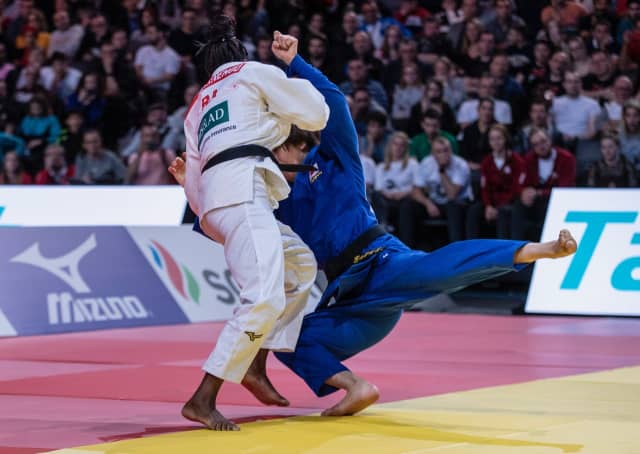 In the first semi-final AGBEGNENOU defeated world number six Andreja LESKI (SLO) by ippon by tipping over the unsuspecting Slovenian for the maximum score on the edge of the area to send the crowd wild. 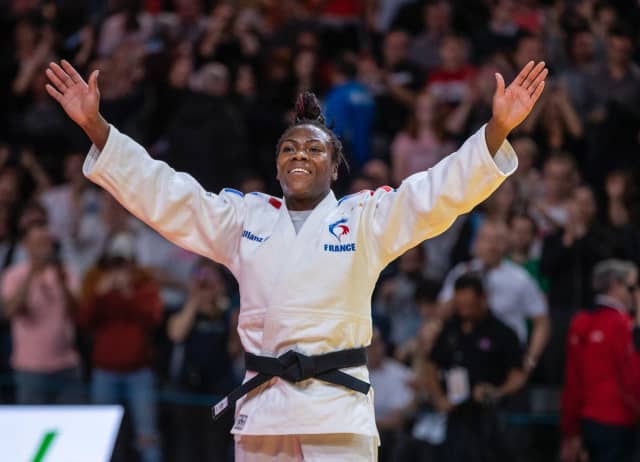 In the second semi-final NABEKURA pinned down Olympic champion Tina TRSTENJAK (SLO) for 20 seconds and ippon to earn a place in the Paris Grand Slam final in impressive fashion.

In the first bronze medal contest Tel Aviv Grand Prix silver medallist Catherine BEAUCHEMIN-PINARD (CAN) produced a disappointing performance as she lost out by shidos against TRSTENJAK who imposed herself just enough to force three errors from her Canadian opponent.

The second bronze medal contest saw Osaka Grand Slam winner DOI Masako (JPN) prevail over LESKI after the Slovenian stepped out of the area after two minutes of added time and duly received her third shido. 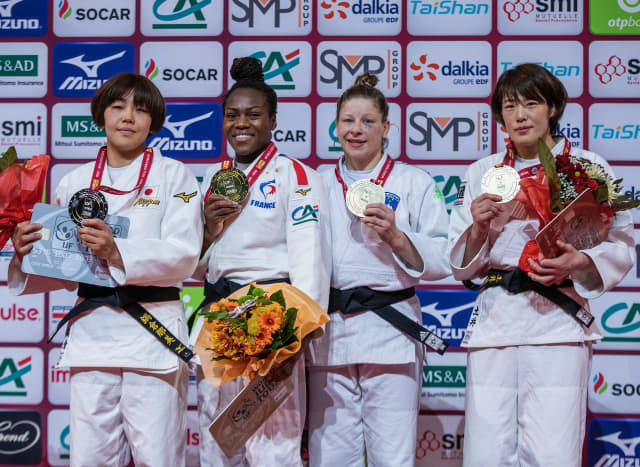 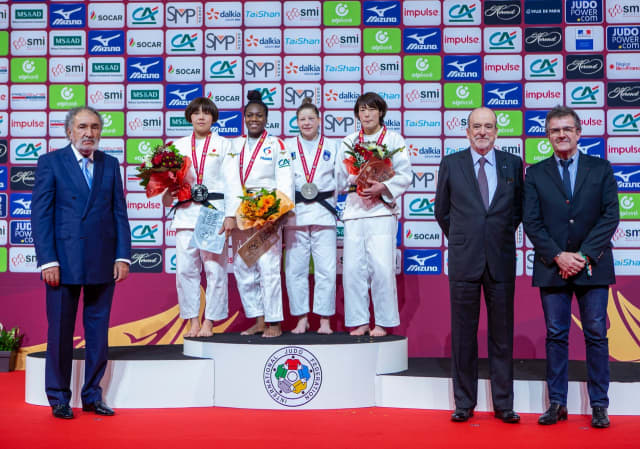 -60kg: World no. 1 NAGAYAMA comes from behind to beat Russia’s ABULADZE

World number one NAGAYAMA Ryuju (JPN) came through his latest test to lay claim to being in pole position for Tokyo 2020 as his teammate TAKATO Naohisa will have to wait for his turn to impress in two weeks time in Germany at the Düsseldorf Grand Slam.

NAGAYAMA went behind against Abu Dhabi Grand Slam bronze medallist Yago ABULADZE (RUS) who held down his Japanese rival after an opening exchange and the Tokai University talent escaped after 14 seconds to remain in the final. The World Judo Masters winner immediately fought back with a morote-seoi-nage for a waza-ari score and then sealed a remarkable and quickfire turnaround by throwing with a ura-nage to capture -60kg gold. 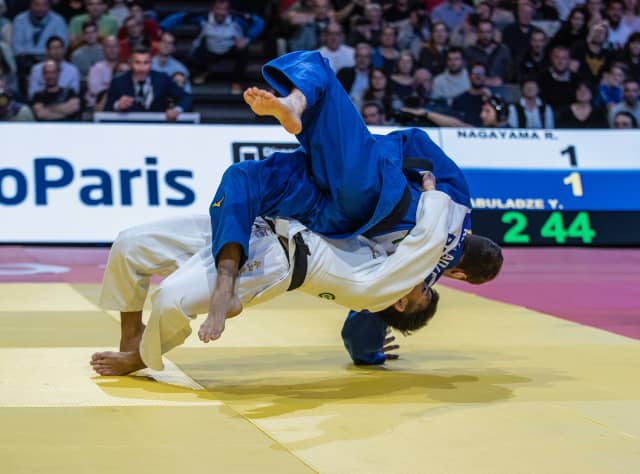 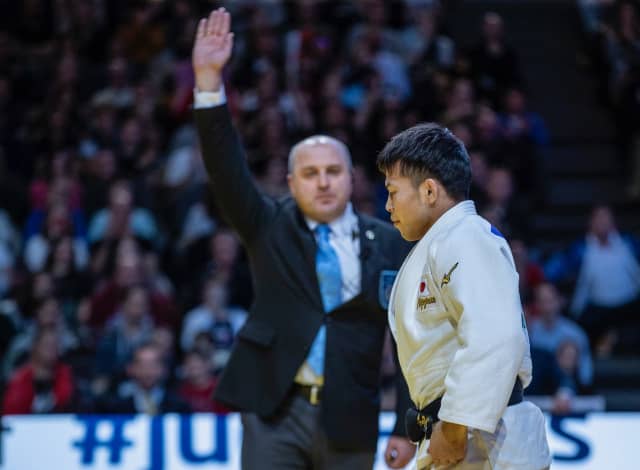 In the second semi-final ABULADZE beat former world champion Yeldos SMETOV (KAZ) by a waza-ari score to progress into the first men’s final of the competition.

The first bronze medal contest was won by SMETOV who sent Tel Aviv Grand Prix winner KIM Won Jin (KOR) through the air with an enormous ura-nage for one of the ippons of the day.

The second bronze medal contest saw AKKUS up against former world silver medallist DASHDAVAA Amartuvshin (MGL) and it was the man from Mongolia who sealed a place on the podium from a perfectly timed o-uchi-gari for ippon two minutes into the contest. 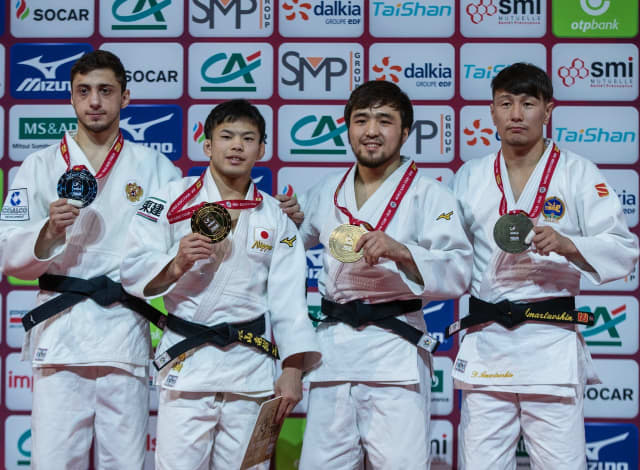 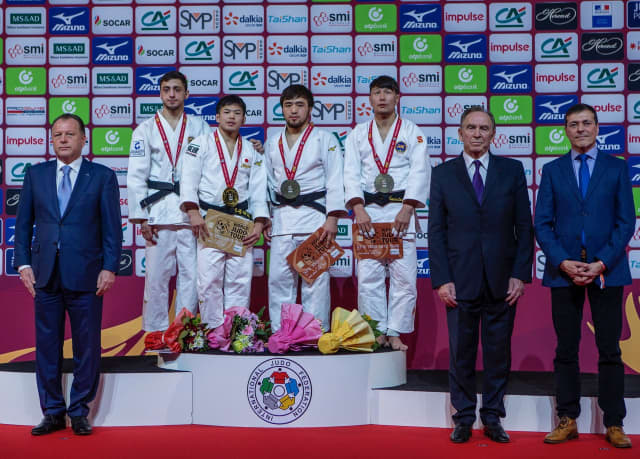 -66kg: Korean one-two as AN Baul re-establishes himself at the expense of KIM

Olympic silver medallist AN Baul (KOR) made a timely return to form and beat his teammate to gold as he now looks set for another tilt at Olympic gold this summer. Baby-faced AN, 25, who won the world title in 2015, registered an unblemished record while Japan-based KIM, 27, squandered the chance to register a vital win over his compatriot as he tamely surrendered the final after receiving his third shido in golden score. 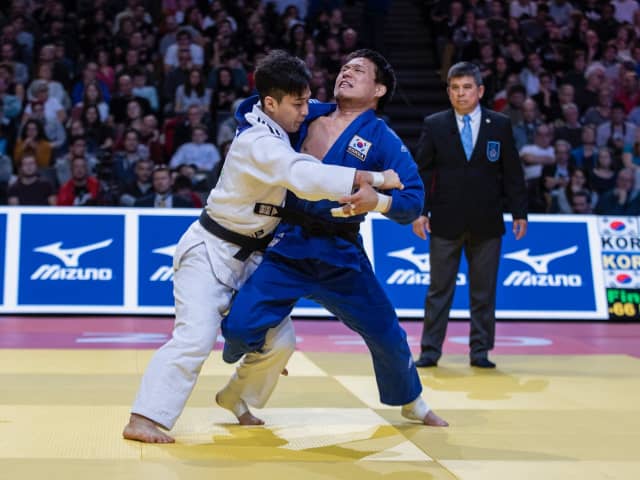 In the first semi-final AN thwarted World Judo Masters bronze medallist YONDONPERENLEI Baskhuu (MGL) by the maximum score to book an all-Korean final.

In the second semi-final 2009 world champion Georgii ZANTARAIA (UKR) struggled against world silver medallist KIM Limhwan (KOR) and accumulated three shidos to bow out of the race for gold as it was KIM who marched on to the final.

In the first bronze medal contest ZANTARAIA reigned over countryman and world number 26 Bogdan IADOV (UKR) with a ko-soto-gake which edged him onto the podium by a waza-ari score. As soon as the gong signalled the end of an exciting clash between the two teammates, the pair immediately shook hands after a spell of ne-waza and the evergreen ZANTARAIA soaked up the moment, and regained his breath, before returning to his feet. 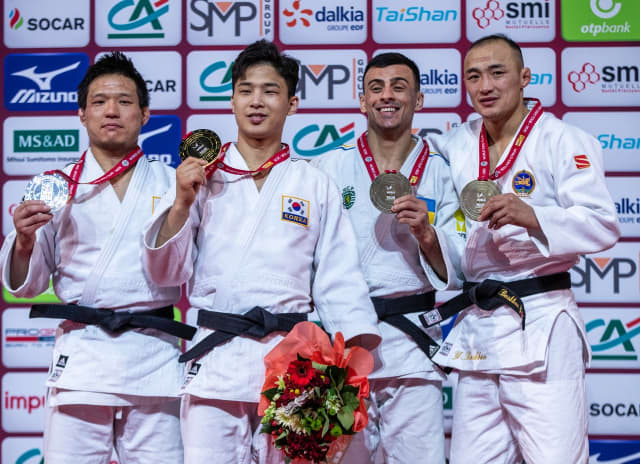 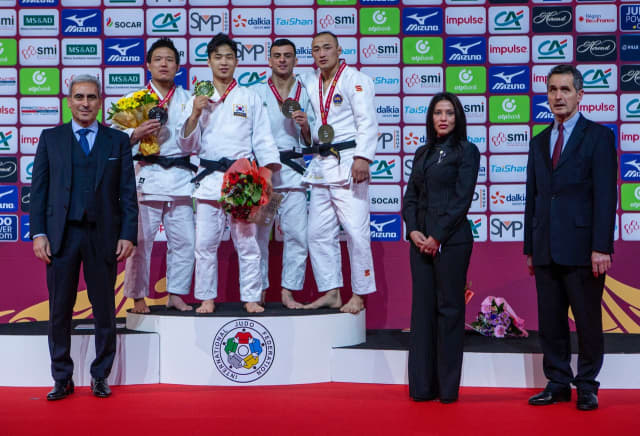 Former world champion HASHIMOTO Soichi (JPN) lived up to his billing as the top seed by defeating three-time Grand Prix winner Zhansay SMAGULOV (KAZ) to win the -73kg final. The Paris crowd saw HASHIMOTO crowned the champion for the third time as he repeated his 2017 and 2019 wins to be the last man standing from a field of 76 judoka. The Japanese number two countered a modified kata-guruma with te-waza for a waza-ari score with 40 seconds remaining to record back-to-back gold medals on the IJF World Judo Tour. 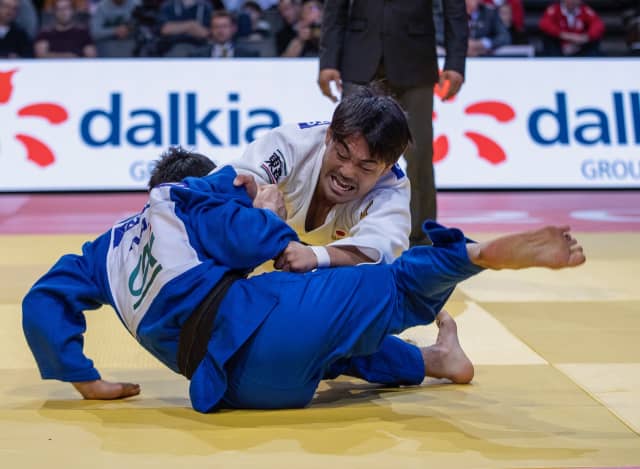 In the first semi-final HASHIMOTO drew a host of errors from world number 10 Bilal CILOGLU (TUR) who came up short against the Japanese thrower as he lost out by hansoku-make. 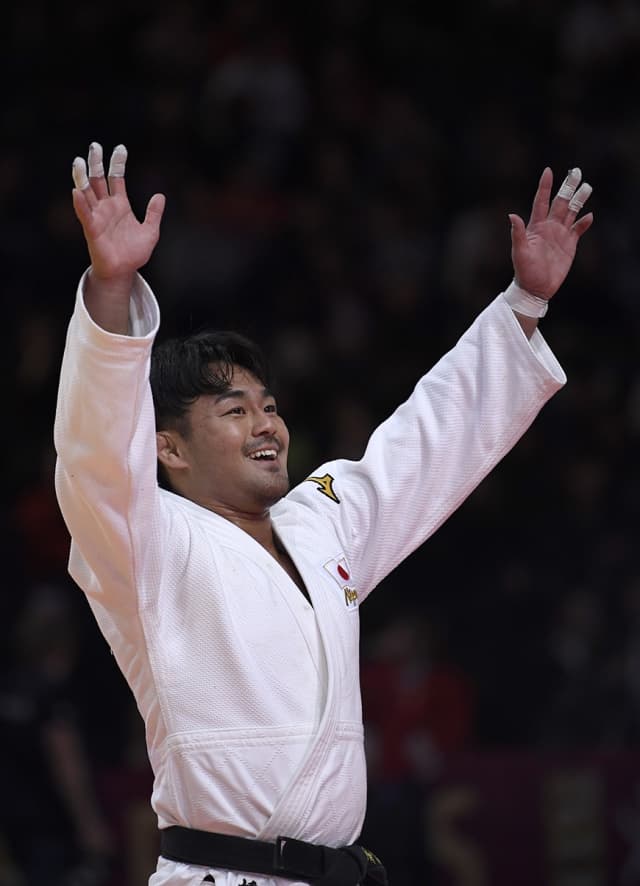 In the second semi-final Rio 2016 Olympian TSEND-OCHIR Tsogtbaatar (MGL) lost a high-scoring contest against SMAGULOV who initially led by a waza-ari before his Mongolian rival restored parity before going over for ippon.

The first bronze medal was won by TSEND-OCHIR who recorded one of the finest wins of his career by beating Japanese legend EBINUMA Masashi. Double Olympic bronze medallist EBINUMA, who could very well have graced Paris for the final time in his illustrious career, lost control of his opponent and was penalised for a false attack in added time which was his third infringement.

The second and last male bronze medal contest was won by world number 15 Khikmatillokh TURAEV (UZB) who stormed past CILOGLU inside 10 seconds after a stunning o-soto-ko-soto combination which had the crowd gasping in awe. 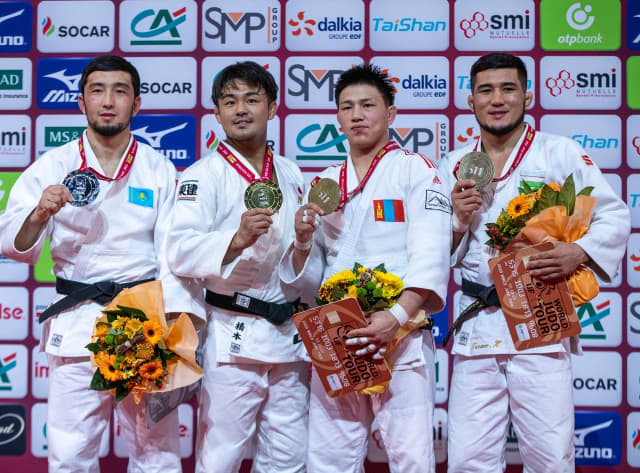 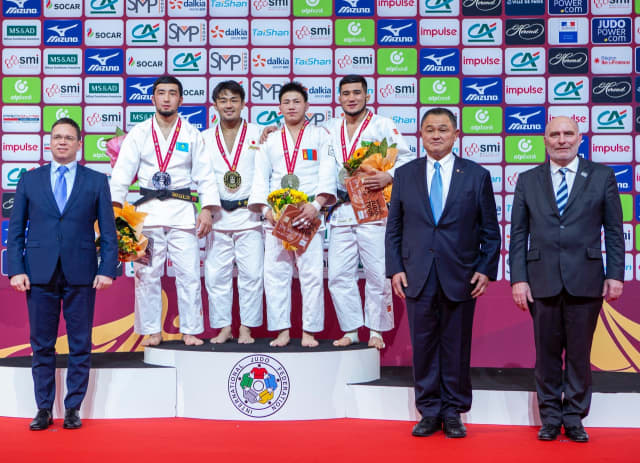