Written by Jo Crowley on 03. Jan 2021
Photographs by Jack Willingham
Share
The first edition of the IJF JudoFest streamed on 27th December 2020 and was a veritable smorgasbord of education and superstar insight.

One section stood out in particular as a perfect pre-cursor to our 2021 relaunch into the World Judo Tour and it was led by Florin Daniel Lascau and Neil Adams, in their roles as IJF Referee Supervisors. As two giants of judo, former world champions, with immense knowledge, both historical and current, they put themselves under the spotlight to answer questions regarding the refereeing rules for contest judo. Here we highlight some of their explanations, in the spirit of fairplay and with a goal of a unified approach to this coming Olympic year. 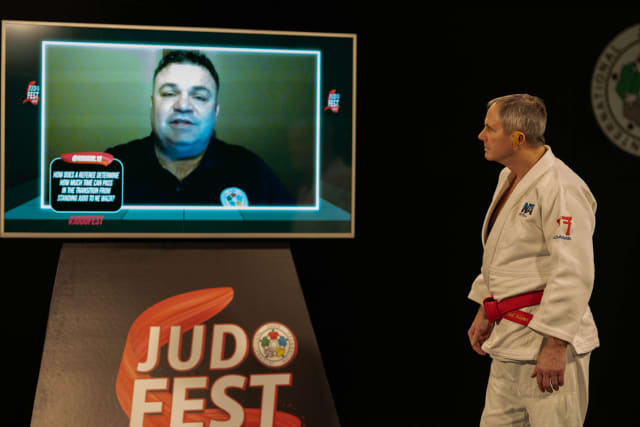 Why has Yuko been removed?

Referee Supervisors: Judo is a dynamic sport and we try to offer it not just to judoka but for the world. We offer two scores and two penalties only, simplifying the scoring, making it easier for everyone to understand. During Olympic qualification the IJF aims to not change or modify rules. We have just a small window after the Olympic Games to try new rules. We tried the extra waza-ari for one year, for example, but found it was an unacceptable way to finish contests.

How does a referee determine how much time can pass in the transition from standing judo to ne-waza?

Referee Supervisors: As long as we can see the fight is active, we will allow the continuation of the fight. 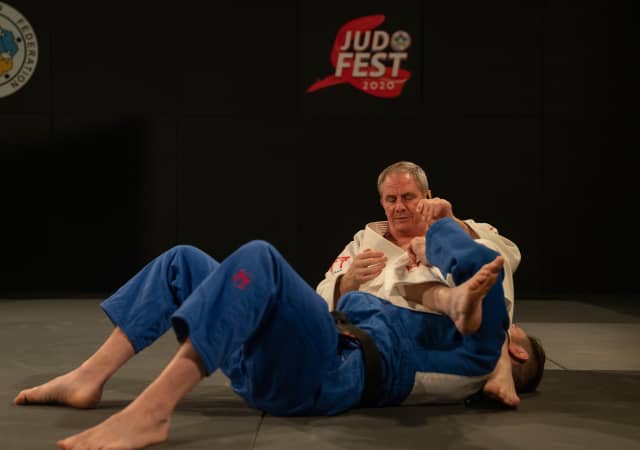 Neil Adams demonstrated a number of transition and ne-waza situations

Referee Supervisors: If I stay here, it’s mate and we will be stood up, but if I’m working really hard to take the leg out and there is progress then the referee will allow it to continue.

Is it ok to hold the wrist?

Referee Supervisors: We can not simply hold the wrist as a grip. Catching the wrist when you’re being gripped or in the process of gripping and using it to throw immediately is allowed, as with any other unorthodox grip.

Can we wear knee pads or other protection under the gi?

Referee Supervisors: There must be no metal or hard objects and we must ensure our opponent still has a fair chance to grip and so here judogi control becomes important. An unfair advantage is created if the trousers become too tight. We use the sokuteki to ensure each judoka offers the same opportunity for their opponent to grip. We advise all national teams to invest in their own sokuteki, to help make the checking process as smooth as possible.

When is going out of the mat a shido?

Referee Supervisors: The responsibility is with the athlete who is stepping out, unless there is clear evidence in posture that there is a push, which would be a shido. Techniques initiated inside but finishing outside, as long as one foot is in when the action begins, can be considered for scoring purposes. If a ken ken technique begins inside and continues outside, if their is no break in action or change of action, it can be considered. Continuous change from an attack to a counter is also scorable even if the counter begins outside. If the attack is blocked and a new action begins from the other person after even a slight pause, this is a completely new chapter of the exchange and is not continuous. We have to differentiate and that would not be scorable. It is not one movement.

What is a pistol grip?

Referee Supervisors: From the traditional low sleeve grip, if the thumb comes around and catches over the end of the sleeve, it is a pistol grip. It offers great control but is non-traditional and can even restrict the blood supply. It can be used in an immediate attack but cannot be held for any amount of time. It’s illegal as a grip but if we have a situation where two judoka are fighting for the end of the sleeve, for example and one catches a pistol grip and throws simultaneously, we can consider the technique for scoring purposes. The word ‘immediately’ becomes more and more important. 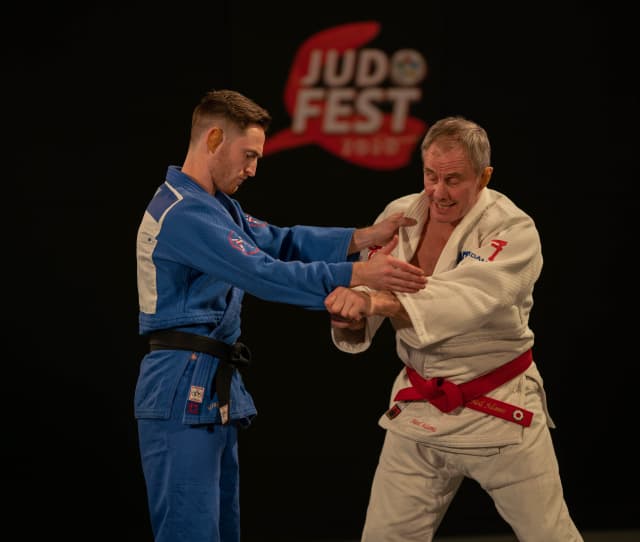 Can you have two hands on one sleeve for defending?

Referee Supervisors: In any situation, to knock off or break off a grip with two hands on one sleeve is not allowed, regardless of subsequent attack. It’s all about being positive. Blocking out, pulling in, in order to defend and not make real attacks, is negative judo.

Is it legal to pass the head under your opponent’s arm?

Referee Supervisors: It is not. Ducking under to avoid the strong grip is definitely a penalty. If you ducked under and attacked immediately it would be ok, so again it’s about being positive. The attack would have to be a real and strong attack.

Is ude-garami allowed behind the back?

Referee Supervisors: Twisting up towards the back and head with a twist of the wrist as well will apply pressure to the shoulder and the wrist. This is not allowed. The general arm entanglement, the normal movement, is encouraged.

Are flying juji-gatame and sankaku allowed?

Referee Supervisors: There are two dangers here. The person applying the flying technique can be at risk with their own weight and the opponent’s weight on the back of the neck as they plant themselves on the tatami. Uke is also put in a position with a straight arm for a relatively long time, making submitting impossible in a timely fashion, to avoid injury.

It is our responsibility to show techniques to judoka of all ages, with the principle of keeping all participants safe. If one person does not have any chance to avoid a dangerous situation then it is not a fair technique. 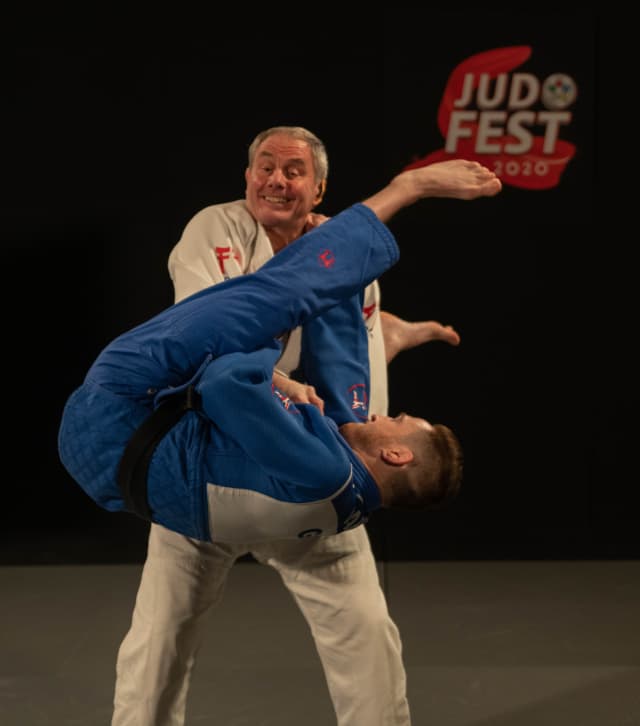 Where is tachi-waza and where is ne-waza?

Referee Supervisors: An opponent on one knee or two knees is still in a position to be scored against with a tachi-waza technique. With one hand down it’s still possible. If all 4 limbs are on the floor it is ne-waza. If I bring my partner back up for a throwing action then it would be ne-waza, but the moment of change occurs the moment uke starts to stand up. Then the position can be considered for tachi-waza attacks again.

If one of the principles is holding the gi, why make it thicker?

Referee Supervisors: We have to design and provide a uniform that is appropriate for all judoka from -48 to +100kg. Thinner material such as a karate gi is just as inappropriate as a really thick gi. The standard thickness applied can be gripped by all judoka of senior weights.

As well as taking questions, Mr Lascau and Mr Adams also used some video clips from recent IJF World Judo Tour events, to revisit some challenging circumstances and highlight the need for supervisors and also for the most up to date technology.

Referee Supervisors: We can see that in some situations an initial landing often looks, at full speed, as though there is no score but, with the help of slow motion playback, we can check the exact point of landing and with the most appropriate angle, there can be a score.

Angles of vision can also assist us when checking whether a score should be waza-ari or ippon. It is important to get this right, despite the slim margins. The impact decides the score. The principle of rolling can often be in play. Landing on the backside and rolling to the back after landing can be two different movements, but if the landing comes from the lower back and through to the shoulders in one movement, even softly but with control, it will be ippon. The whole of the back makes contact.

Landing with uke’s elbow outside takes the opportunity to score away. The angle of the camera here is important. This is where the importance of the referee supervisors is clear. Three angles from cameras means a comprehensive view.

This all goes to illustrate the hard job of the referee, the supervisors and the commission.

As this segment of JudoFest 2020 closed, our Referee Supervisors noted that the hour had flown by and that their desire to see the rules applied consistently and fairly made it a pleasure to offer this kind of clarification.

Referee Supervisors: Thank you to FF for making it possible for us to share so much information. This has been a blast and we would like to wish you all a happy and healthy start to 2021. Make it happen and we’ll see you all out there!

The IJF Referee Supervisors will be supporting the athletes, national teams and of course the referees in Doha for the IJF World Judo Masters in the coming days.