A new home for the refugees in Meheba, Zambia

By Nicolas Messner on 21. Dec 2018
Share
On December 19th, as the end of year approaches and most of the dojo's around the world are going to close their doors to celebrate the new year, a brand new dojo was opened in the Maheba Refugee settlement, 700km from Lusaka, the capital city of Zambia. 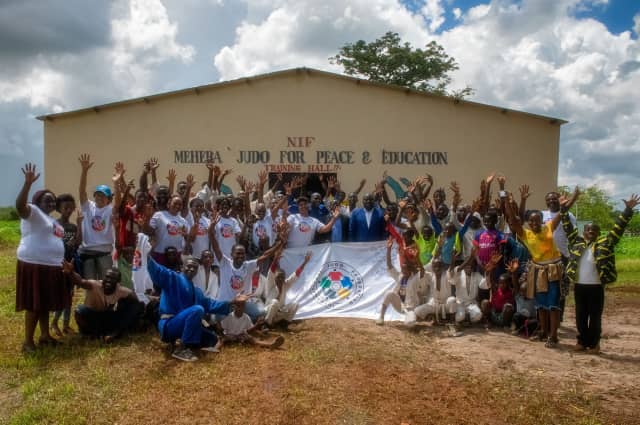 Financed by the Norwegian Olympic and Paralympic Committee and Confederation of Sports (NIF), the venue was inaugurated by the IJF Judo for Peace director, Nicolas Messner, in the presence of the President of the Zambian Judo Association (ZJA), also President of the National Olympic Committee of Zambia (NOCZ), Alfred Foloko, who was accompanied by executive committee members of the judo federation, by representatives of the Zambian Government, local authorities, camp leaders and UNHCR (United Nations High Commissioner for Refugees) delegate.

More over the stars of the day were the young refugee judoka themselves, who will from now on, benefit of the new dojo, which is meant to become a true home to all of them, as they had already suffered too much in recent years.

The Maheba project was officially launched in November 2016, within the framework of the ZJA structure development plan (Olympic Solidarity programme). Quickly identified as a potential starting point, Maheba was just waiting for a coach to initiate the judo activities. In January 2016, when Faustin, a black belt judoka, arrived in the camp, aged 32, after having escaped from his home country, where is life was in danger, the project enter into action. Thus Faustin was designated as the coach. He stared with a dozen of children, with the equipments provided by the Federation. 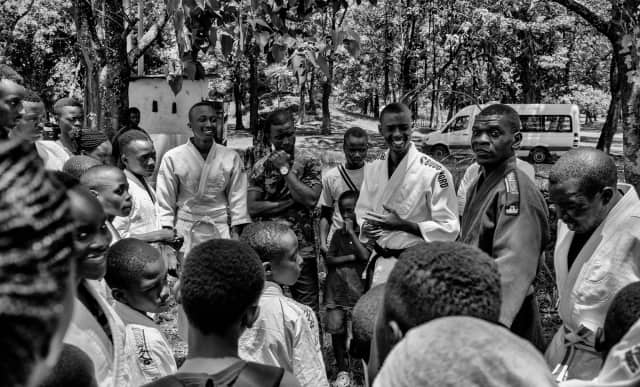 One year later, the group of judoka reached already 100 members. It is on the occasion of the second inspection visit of the Judo for Peace commission in October 2017 (which was accompanied by the representative of NIF, Diane Huffman, and of the 'Judo for Fred' commission of the Norwegian Judo Federation, Birgit Ryningen), that a clear situation of the needs could be established that led to the building of the dojo in the last semester of 2018.

For Faustin, this sounds like a miracle: “Life is harsh here. We are far away, isolated. We have suffered a lot over the past years, when we had to flee our respective countries (more than ten African countries are represented among the refugees) and to settled down here. We have to rebuilt everything, including ourselves. To live here, we had to become farmers, which was not the case for all of us. I was graduated from university at home, some of us had a job in an administration, but here this is different. This dojo in Meheba is a real miracle. I was a black belt before arriving here but I couldn't imagine that judo would give me such a second chance. Thank to the hard work of everyone, this is becoming a reality. This dojo is beautiful and we are gonna be able to welcome more children who will learn our sport and its values.

Until now, Faustin and his assistant coaches, have been organizing judo five days a week, from Monday to Friday, starting with the youngsters in the early afternoon, and continuing with the more advanced judoka late afternoon. The new dojo having been built between two schools, one including a dormitory, it is guaranteed that the number will increase, while judo will stil be proposed to the children of the first place, where it all started. Today, the programme includes more than 200 judoka. 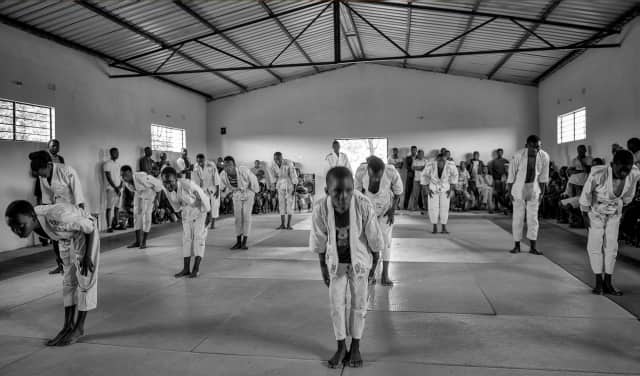 Let the show of the judo demonstration begin

Alfred Foloko, who was present in Maheba and represented both the ZJA and the NOCZ was very happy: “We had a very beautiful day in Maheba. We saw a lot of smiles of the faces of those young people who witnessed many traumas. Judo has the incredible capacity to give back hope. I told to the audience that if their dream was once broken, it was not destroyed and judo will help them to dream again. We have the responsibility to help those children, they are like ours. This dojo is their new home and they have to make it beautiful and keep it in good conditions to welcome more and more people. We are going to keep supporting the programme in Maheba, before we will also move on to other places that need our support. Sport is an incredible tool and especially judo. Once you enter into the dojo, there is no difference any more, we are all the same and we speak one single language, which is judo.“

The Acting Refugee Officer and administrator of the Ministry of Home affairs (Mofya Kaputa) and the representative of the Ministry of Community Development and Social Services (Nyawa Phiri) agreed to say that judo has started to play an important role within the community and they are looking forward to seeing that impact increasing in the near future. When the President of Maheba Sports disciplines representing the provincial sports coordinator of the Ministry of Sport, Youth and Child Development, Kenneth Lingunja, underlined the fact that the dojo being located between two schools, he would be very pleased to see all the children taking part in the sport and that one being integrated within the sport curriculum of the schools of Meheba. 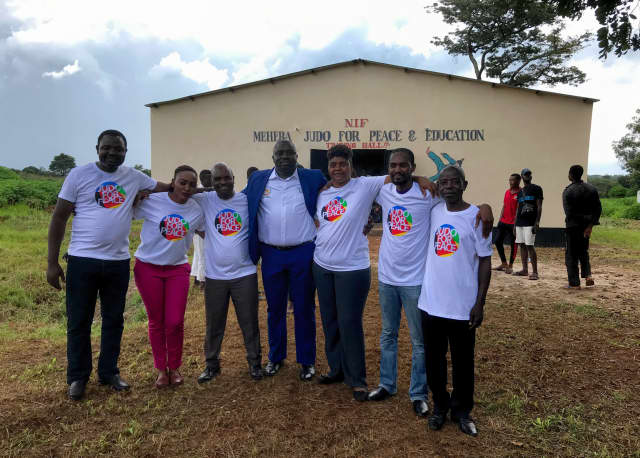 Nicolas Messner, who has been accompanying the ZJA since the beginning, was very pleased: “Within a few years, we have been able to develop a really powerful and effective project that benefits more and more refugees. This would not have been possible without a strong partnership between all the stakeholders. It's the third time that I come to Maheba, I see that the number increases and that the level follows, thanks to Faustin and his team. We have the proof here, that judo can definitely bring peace and maybe more important, inner peace after the trauma the refugees went through. Cutting the ribbon today and opening the doors of the dojo was a very emotional moment for all of us.“

The new dojo will for sure change the lives of many children and young people in Maheba as it has already started. Since the inception of the Judo for Peace programme and with the support of all the partners involved, refugees were able to leave the camp to participate in Competition throughout the country and they already obtained their first medals. This will develop in 2019, especially since the UNHCR representative mentioned that he believes in what judo and sport can bring to the community, thus he wants to be more involved. There are still a lot to do though, and the IJF, ZJA, NOCZ, NIF, Government... will keep working hard to welcome more partners on board and to help more people. 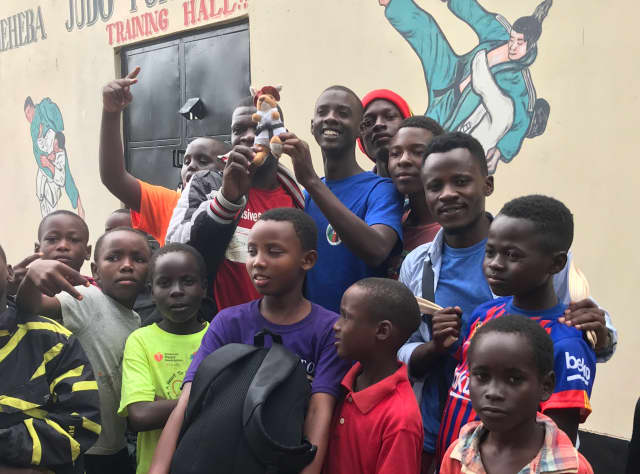 Judoroo Jr., the little mascot that went to space with French Astraunot, Thomas Pesquet, is now traveling the world and was also present on the occasion of the dojo inauguration

During the afternoon, the young judoka wanted to talk to the IJF representatives and therefore a very open and friendly exchange took place in the brand new dojo. All of them said as one: “We value this place and we will make it our home. From here we hope and we believe we can have a better life. Maybe one day, we'll be able to participate in big competition under the refugee banner. That would be amazing, and we will always remember that it all started here. Thank you for what you have bene doing for us. We will never forget.“