Written by Nicolas Messner on 09. Oct 2021
Photographs by Gabriela Sabau, Marina Mayorova
Share
While the last day of the individual Junior World Championships ended in apotheosis and while there is now the mixed team competition to come to definitively close the 2021 edition of the competition, Michael Tamura, IJF Sports Director in charge of the juniors, commented on a week full of lessons. 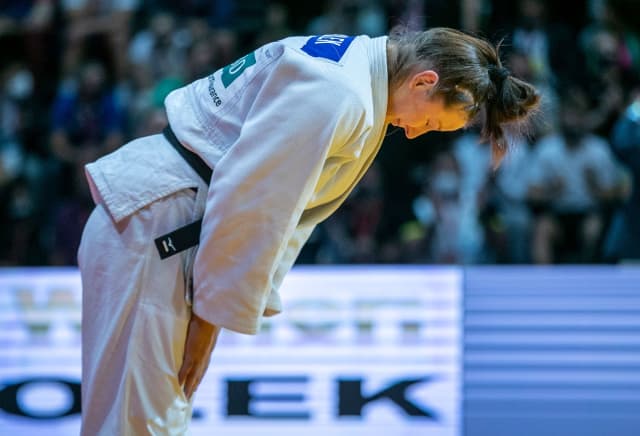 But before that during the final block, the IJF President, Mr Marius Vizer and the Mayor of the city of Olbia, Mr Settimo Nizzi, were presented with a special gift from Mr Gavino Piredda, President of the organising committee of the World Judo Championships, Olbia 2021. 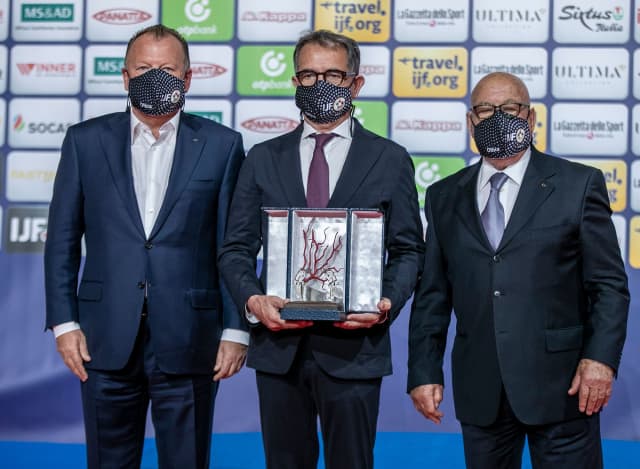 Michael Tamura explained, "From a personal point of view, it was a huge opportunity to be here and officiate as the Sports Director. I want to give a huge thank you to the IJF President, Marius Vizer and Vladimir Barta, the IJF Head Sport Director, for giving me the opportunity and for guiding me through this very exciting and demanding job. For me, it's really a dream come true to be here. It's exciting, it's overwhelming to be part of this organisation. I love judo and my judo family. Honestly this is beyond expectations.

What has been really challenging over the past months was dealing with the whole Covid situation. You can't imagine how difficult it is to bring delegations from all over the world, together here to compete. I must say that the IJF protocol is an example of good practice and of safety for everyone. 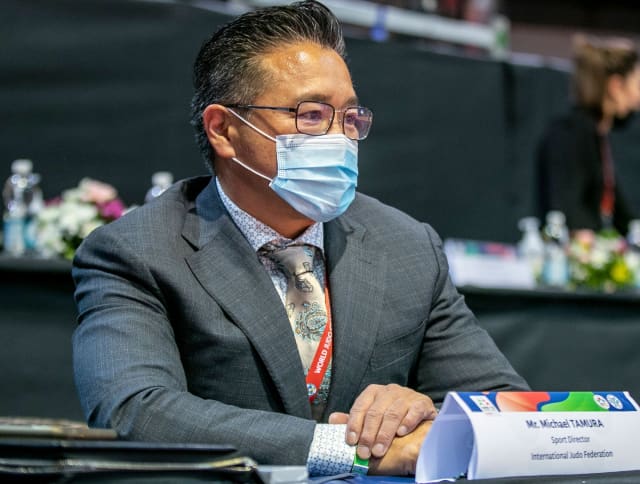 To be clear, before the start of the competition, I was a bit scared, because most of the athletes had to stop competing and even training during Covid. Delegations were isolated, so I didn't know what to expect in terms of level, but you saw, during the week, that the judo was incredibly strong and dynamic. This is a great sign, showing that our judo family never surrendered when faced with the pandemic. I am so proud of everyone.

You know, months ago, nobody would have imagined what we went through and still today nobody can tell exactly where we are going. What is sure is that judo in Olbia proved to be doing really well.

As I'm also in charge of Judo Canada, I can tell you that we are still struggling, because it's different in every province. Over there, as well, we are working hard and the IJF gave us a great example and brought us hope.

To summarise, I am a happy Sport Director. I am happy about what I saw and how it went and I'm really looking forward to watching the mixed team event. This shows how much our judo community is united."

Anna Monta Olek (GER) and Real Van Heemst (NED) qualified for the first final of the fourth day of competition at the Junior World Championships. For both it presented a potentially very special moment, since it could be Germany’s first gold medal in Olbia and for Van Heemst it would be a great confirmation of the good form of the Dutch delegation which has already won one gold and one silver medal. Whatever the results would be, the two athletes dominated the preliminary rounds with consistency and concentration. Olek and Van Heemst knew one another quite well already. They met a few weeks ago during the Junior European Championships, in the final and the German judoka won. What would the results be this time? 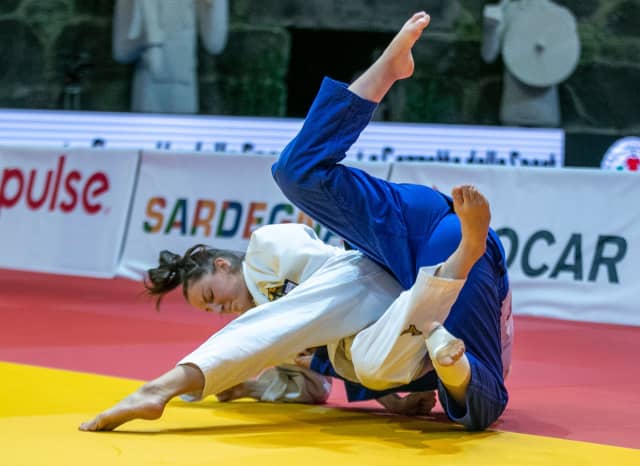 Once again Anna Monta Olek executed the perfect final, scoring a first waza-ari with her right-handed uchi-mata, followed immediately on the floor for ippon.

Anna Monta Olek said, "It was the same final as the European Championships. We are now starting to know each other so before the final I said to myself, ‘do exactly the same as last time.’ I did it and it worked. On top of that, Germany got a bronze. What a superb final day!" 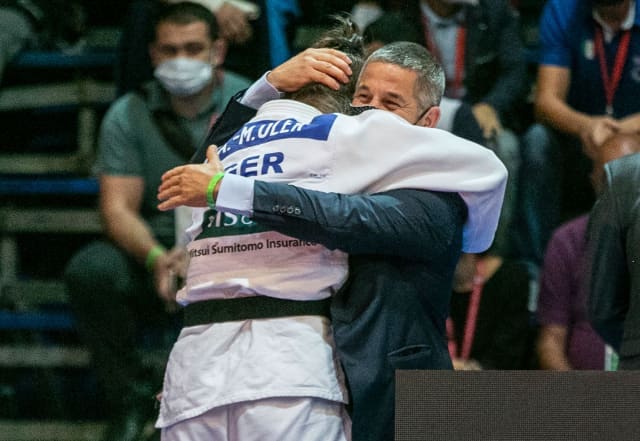 The second German competitor of the category, Raffaela Igl, was also present in the final block. She faced Yelyzaveta Lytvynenko (UKR) for a place on the podium and after a nice piece of groundwork pinned down her opponent for ippon and the bronze medal.

In the second bronze medal contest, Liz Ngelebeya (FRA) was opposed to Eliza Ramos (BRA). With less than one minute to go, Ngelebeya scored waza-ari and seemed in a good position to win but a few seconds later Eliza Ramos also scored with an o-soto-gari for waza-ari. It was time for golden score, in a match that was more undecided than ever. It was eventually Ramos who scored the second and liberating waza-ari to win the bronze medal. 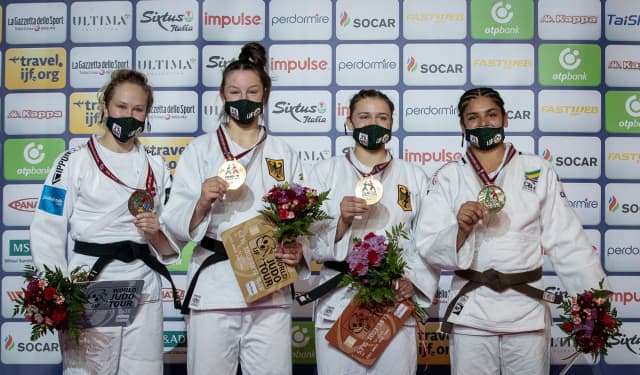 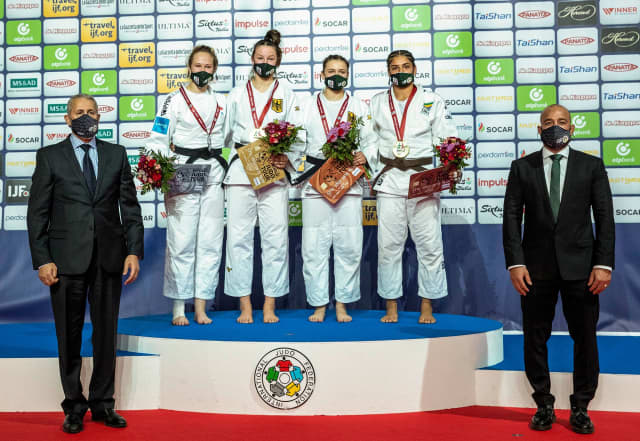 -100kg: This Time It's Gold for Sulamanidze

Uzbekistan and Georgia are two major players on the World Judo Tour, so finding competitors coming from those two countries was not really a surprise. The whole morning session was dominated by the two judoka, Sukhrob Rajabov (UZB) Ilia Sulamanidze (GEO), who moved a lot of weight to clear the patch in front of them. 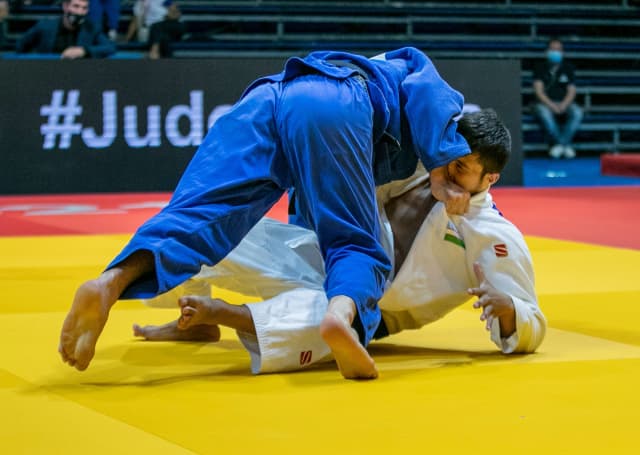 We had to wait until the last minute to see the first score of the final, when Ilia Sulamanidze executed a perfect okuri-ashi-barai. Already the winner of several World Judo Tour medals, of the senior world championships bronze medal in Budapest this year and a former junior world silver medallist, 2021 is his year to become the new junior world champion too.

Ilia Sulamanidze said, "Before the final my coach was talking a lot and I said, ‘don’t worry, I’m ready.’ I started slowly and after 2 minutes I started to push. Then I threw just as I expected." 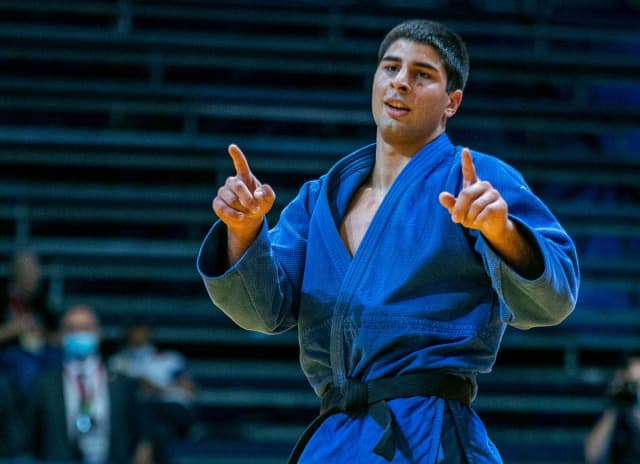 The first bronze medal was disputed between Viktor Adam (SVK) and Matvey Kanikovsiy (RUS) and it was the Russian who scored the first waza-ari and kept dominating the match before scoring a superb ippon with ashi-guruma to seal the deal.

Another Uzbek competitor was also present in the final block: Utkirberk Toroboyev. He qualified for the second bronze medal contest, to fight against German Kilian Kappelmeier and during a tough match scored two waza-ari to win what was still the first medal of the Uzbek team before the final took place. 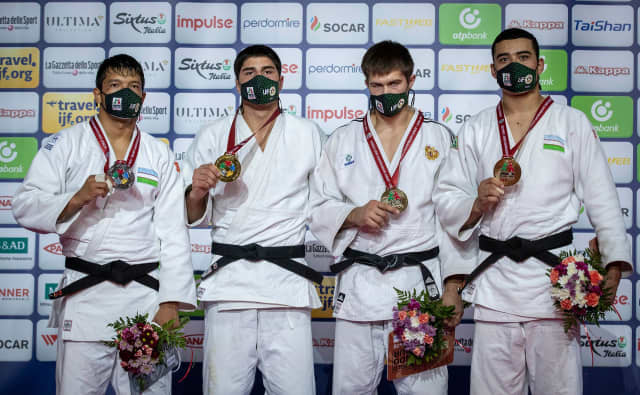 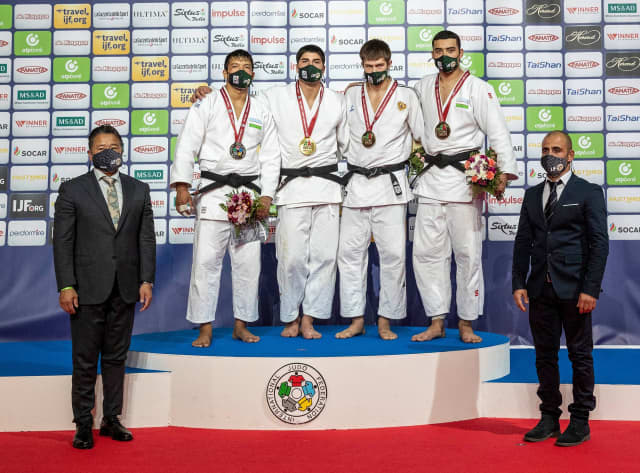 Marit Kamps of the Netherlands was not really a surprise, as she arrived as the top seed here in Olbia. She joined Coralie Hayme of France in the final. Actually the French judoka was seeded number two and so this was not a surprise either, in a category where athletes are more and more showing incredible physical and technical capabilities and a great ability to throw. 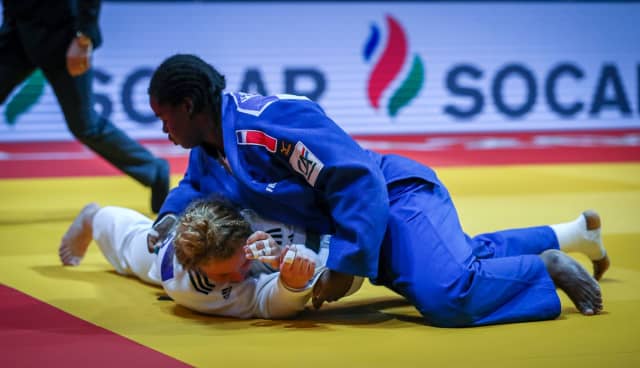 The least that can be said is that Coralie Hayme dominated the final. Never really in danger, she controlled the kumi-kata perfectly, pushing Kamps to be penalised twice and at the right moment, the French fighter executed a low tai-otoshi to score waza-ari, one she kept until the final gong, for a well deserved junior world title. Hayme's mastery at that level of competition was quite impressive. Nothing seemed to bother her and she applied the perfect tactics.

Coralie Hayme said, "I was thinking too much all day long, in every contest. Before the final I said to myself, ‘be proud,’ so in order to be proud I had to give everything. I could have been more mobile but it was ok. She did what I expected before the contest. I did not want to reach golden score or count on shidos so I tried to score and I did it and now I’m proud and happy." 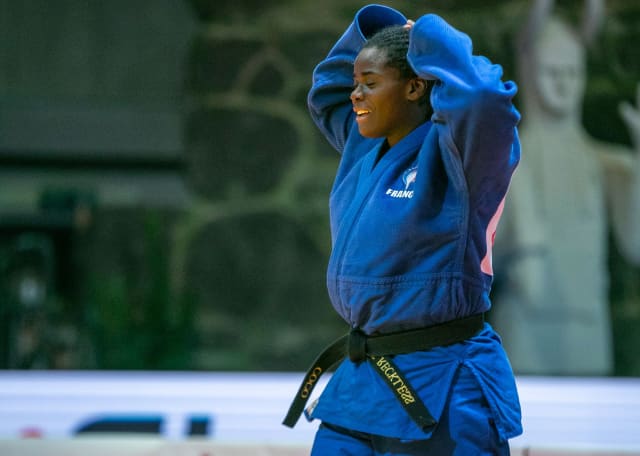 Despite many difficulties, Venezuela is one of the countries that puts athletes in the position to win medals regularly, here with Amarantha Urdaneta, but also on the World Judo Tour. She faced Hilal Ozturk of Turkey; a country that has a strong recent history in the women's heavy weight division. In less than 45 seconds the result was known, with Ozturk scoring waza-ari from a maki-komi technique, followed with an immobilisation for ippon.

Lea Fontaine, also from France, was hoping for a better finishing position, but she had to limit herself to compete for bronze against Elisabeth Pflugbeil of Germany. The same scenario occurred here as during the first bronze medal contest, with a first waza-ari from Fontaine followed by an immobilisation for ippon and a new medal for the French delegation. 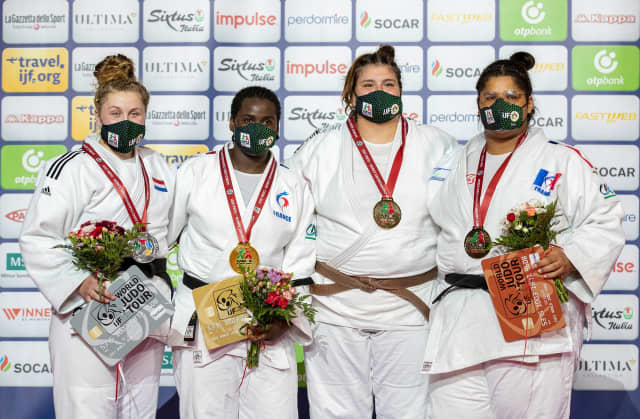 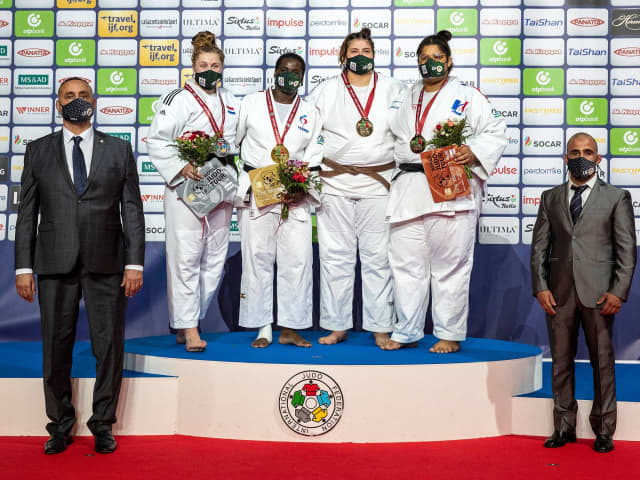 The last category of the day and of the individual tournament saw two countries already with at least a gold medal each, facing off for the ultimate title. In fact, before the beginning of the day, Georgia, represented by Saba Inaneishvili, was pointing at the second place in the nation ranking, with two gold medals already, with Hungary, represented by the current European Champion, Richard Sipocz, sitting with one, so far. 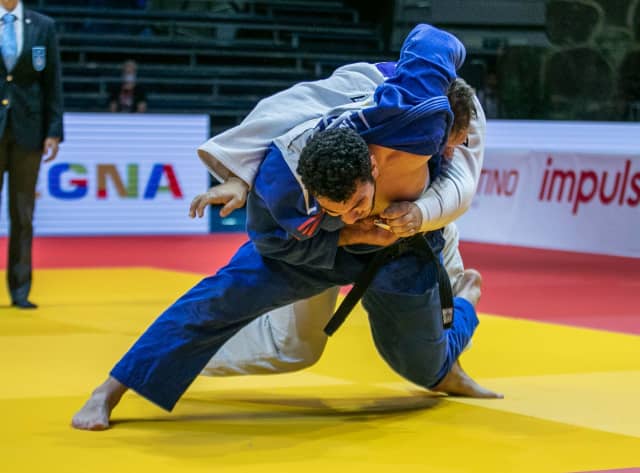 The final was a tactical match between the strongest men of the day and they needed the golden score period to determine the winner. During normal time, only shido had been given and none of the attacks, from either side, seemed to be dangerous, until Saba Inaneishvili jumped into a tiny space to score a waza-ari and add a fourth gold medal for Georgia. Georgia finished at the first place in the medal ranking. 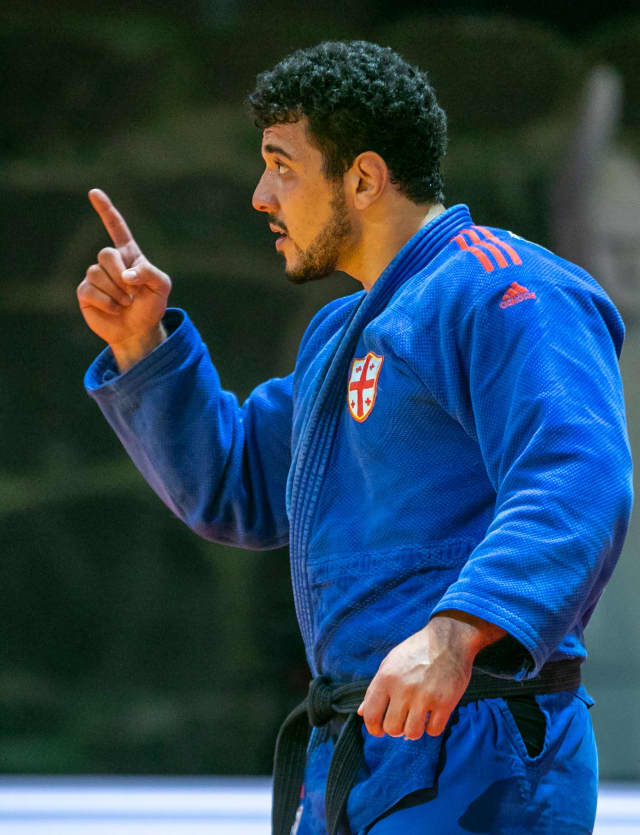 Saba Inaneishvili said, "Of course I wanted to win but you know, my mother came to see me and it is the first time we have seen each other for five years. I won for me and for her.

In the final, my plan was to wait and stay away from him until he became tired and then to push very hard. Mission accomplished! It is the happiest day of my life." 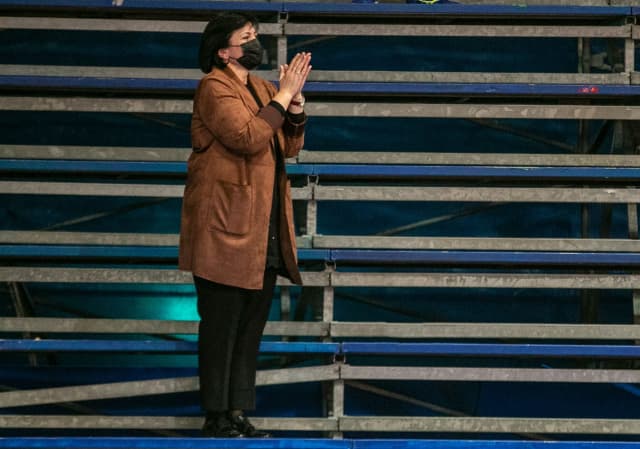 As for the final of the -100kg, both Georgia with Irakli Demetrashvili and Uzbekistan with Shokhrukh Mamarasulov, qualified for a medal match but this time only one could step on the podium with the bronze. Mamarasulov took a strong lead with a maki-komi for waza-ari but then Demetrashvili produced one of the most powerful throws of the week. After engaging with o-uchi-gari, he concluded with a massive ko-soto-gari that landed Mamarasulov flat on his back for ippon and a new medal for Georgia.

Germany secured a medal, with both Yvo Witassek and Losseni Kone qualified for the second bronze medal contest. It is always difficult to score against a teammate when you know exactly and perfectly what he's doing. Witassek produced a powerful o-soto-gari that Kone desperately tried to counterattack but it was not enough and the first waza-ari initially given was turned into ippon and the bronze medal for Witassek. 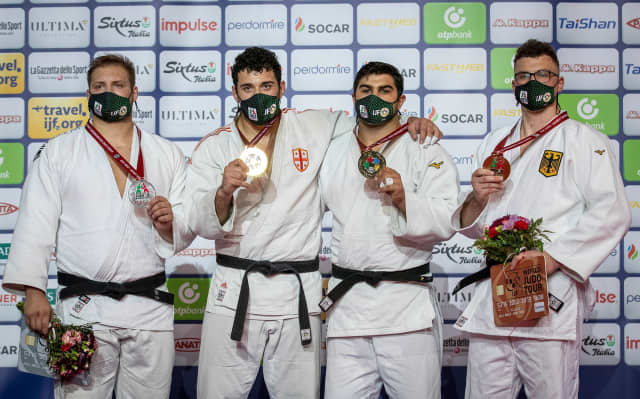 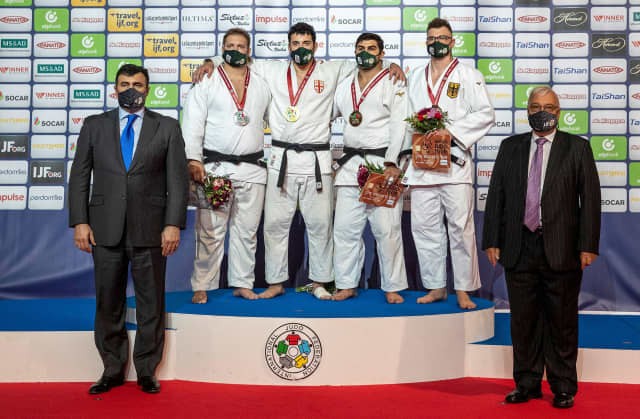