Soundbites and Results from the Veterans Worlds – Day 3

By Gabriela Sabau, Christian Pierre on 12. Oct 2019
Share
On 12 October, the floor was open to the men of categories M4 (45-49 years) and M5 (50-54 years). All together another competition day full of action with 274 judokas on the mat striving to excel and crown themselves World Champion in their respective categories. 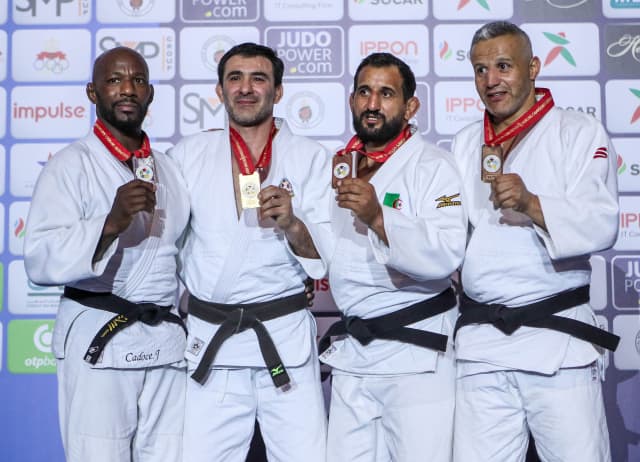 We mentioned it earlier, the number of participating competitors – 1.183 from 49 countries – at this World Championship is impressive. Proof that the judo veterans’ community is very much alive. However, no judo without the referees. Seeing to it that every bout is fought fair and square, no less than thirty referees, four mat chiefs and two IJF supervisors are present here in Marrakech, making the righteous calls. IJF Media had a chat with both IJF supervisors.

“As supervisors we don’t change the rules, but we sometimes have to further comment on the rules,” says IJF Referee Commission member Pasquale Chyurlia. “Sometimes there is a need to do so. Championships like this Veterans or Cadets sometimes bring young or less experienced coaches to the mat and we’re here to explain and help them understand the interpretation of some rules.” 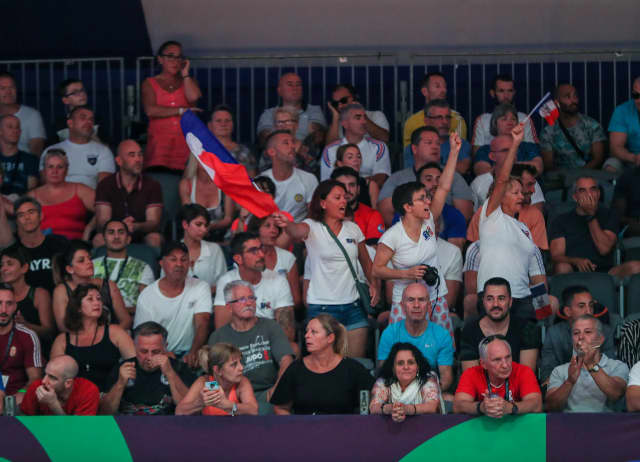 “There is no difference in refereeing a Veterans tournament,” says IJF Refereeing Director Donald Ferland. “The same IJF rules apply. The older athletes also adapt to the new way of thinking. We have to understand that people are human and that sometimes there is adaptation time necessary and occasionally the problem is the judo teaching they had. We notice techniques that are not correct, but mainly that’s not the athletes’ fault. So good judo education remains important. Athletes on the main World Judo Tour know that, at this tournament, you have guys that are in their sixties or seventies, they don’t really adapt that quickly to the rules, hence the importance of good refereeing. However, I’m very much impressed. Overall, most people here know exactly what they are doing.” 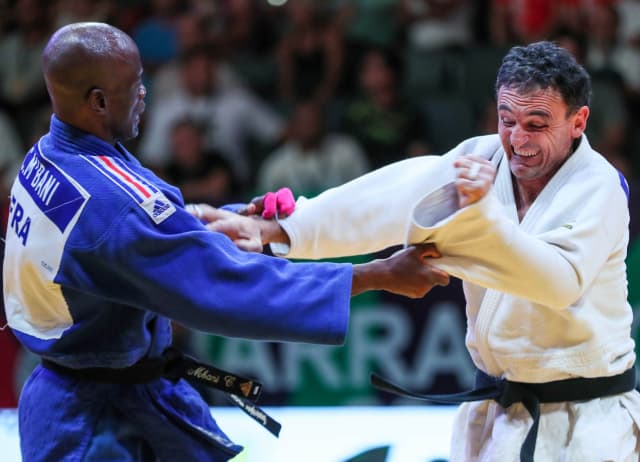 You have to be impressed seeing people in their fifties, sixties even seventies doing pretty good out there on the tatami. “Indeed, the judo we see here is quite good. We’ve seen some fine throws. Most of the guys are still pretty strong and they have a good knowledge of judo,” Donald says.

“It’s also nice to see they have many tactics”, adds Pasquale. “They’re here to win. They are very determined.”

“The problem here is if you got to Golden Score, you’re a bit older as a veteran and the overtime is much tougher on you,” Donald smiles. 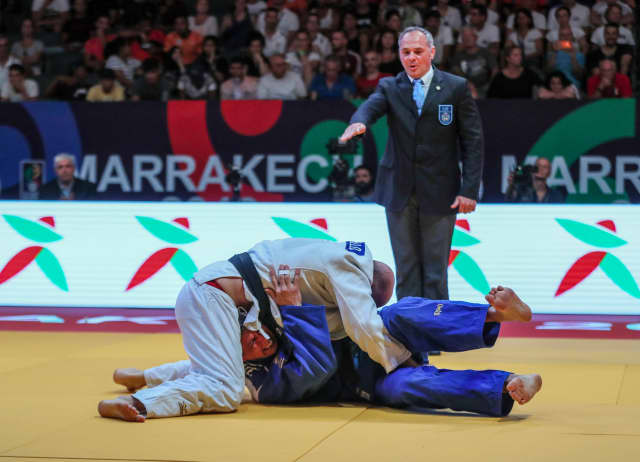 “What we want to set in place is that younger referees evolving towards their A-license can also come to these kinds of tournaments to get a lot of exposure but also that little bit of stress of refereeing at a genuine World Championship staying focused all the time. Because the judokas on the mat are competing for a World title here. So, as we go into the future, we will try to get younger referees involved as well so they will have more experience for the regular circuit and A-license, that’s the goal,” says Donald.

Overall, the Veterans Worlds are a great tournament. These judokas on the mat show that judo is a lifelong sport. The adagio ‘Judo for Life’ stands.

“I also notice that participants now prepare well to come here to compete. They train hard, and they don’t look too bad on the mat. They are really in good shape. The set age limit for men is category M9, age 75 to 79. When you’re 80 you can’t compete anymore, but you can coach,”, Donald jokes.

Pasquale confirms. “They prepare well in their dojos at home and they are indeed in good shape. Which helps also in preventing injuries. So far, we haven’t encountered any serious injuries and that’s also very important.” 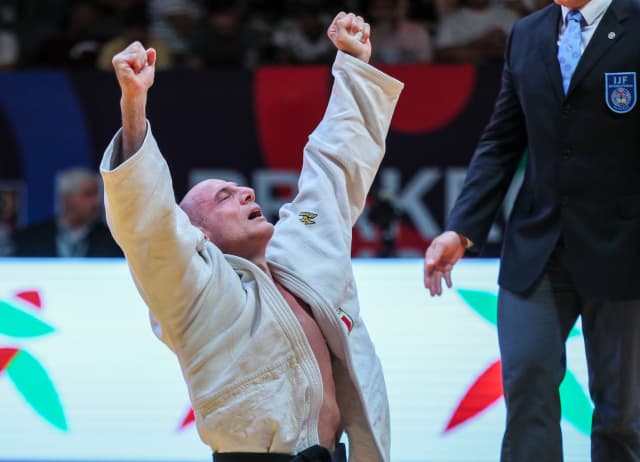 Chilean judoka René Zapata (M4/-90kg) is one of these well-prepared judokas. He appears in good shape when stepping on the mat. “I wanted my first bout to be a good one,” the judoka from Antofagasta, a port city and regional capital in a mining area in northern Chile’s Atacama Desert, commented.

“It’s important to have your head right from the very start. Luckily, I won the match against my Canadian opponent. It was like a clash of the Americas,” he jokes. Veteran judo is important to him. “For me it’s a ‘rebirth’. I started with judo when I was a kid, growing up with the sport I love. But then when you get older, there is work and family as well and sometimes you have to step away from it for a while. So, when I restarted with the veterans it was like feeling much alive again, just exhilarating. I’ve been training six days a week to prepare myself. Almost like a professional,” René laughs.

“I run my own business, so that makes it possible for me to do so and spend more time at judo. It’s my fourth Veterans World Championship,” the Chilean proudly ends. 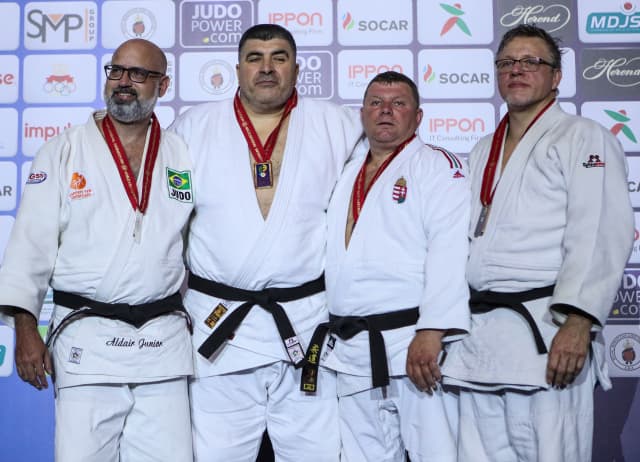 “Again, we saw very exciting judo today in Marrakech. We saw judo of a high level, very physical. Every judoka was giving his best performance. I’m looking forward to the female competition on the last day,” Denis Weisser, Chairman of the Veterans Commission commented. “I’m also happy we could reward already a number of the winners of the ‘My Way to Marrakech’ video contest and we will continue tomorrow. So, it was a little bit of everything today. I’m happy so many competitors participated in this event. It’s fabulous.” 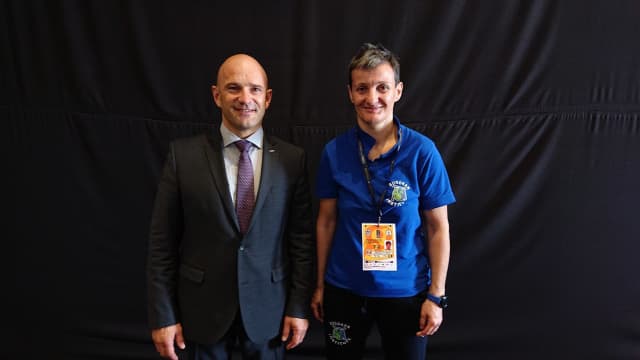