Written by Pedro Lasuen on 20. Feb 2021
Photographs by Gabriela Sabau
Share
A planetary virus, numerous confinements, deprivation of liberty and concern for an uncertain future: this as a backdrop! We need light, hope. That's what sport is for and especially judo. That is why the Tel Aviv Grand Slam had to be organised and celebrated. For this reason, after an epic event full of administrative, political and geographical obstacles, the third and last day was the culmination that closed a brilliant week for everyone and everything.

When, despite the restrictions, a country turns to organisation and welcomes more than sixty delegations, with all the health and safety guarantees, it is fair to honour the efforts made by Israel.

Of course, for showing that fatalism is a decision and that there is always an alternative, which is to fight, we must celebrate Judo.

Finally, because the tournament has shown that everything is possible, it is only a question of will, we honour the rest of the world for taking part.

To give voice to all this in a synthesised way, there is nobody better than the president of the International Judo Federation, Marius L. Vizer, “sport has the power to change the world."

The last day of the grand slam was in the image and likeness of the previous two. Many favourites fell by the wayside and only a few confirmed their credentials. 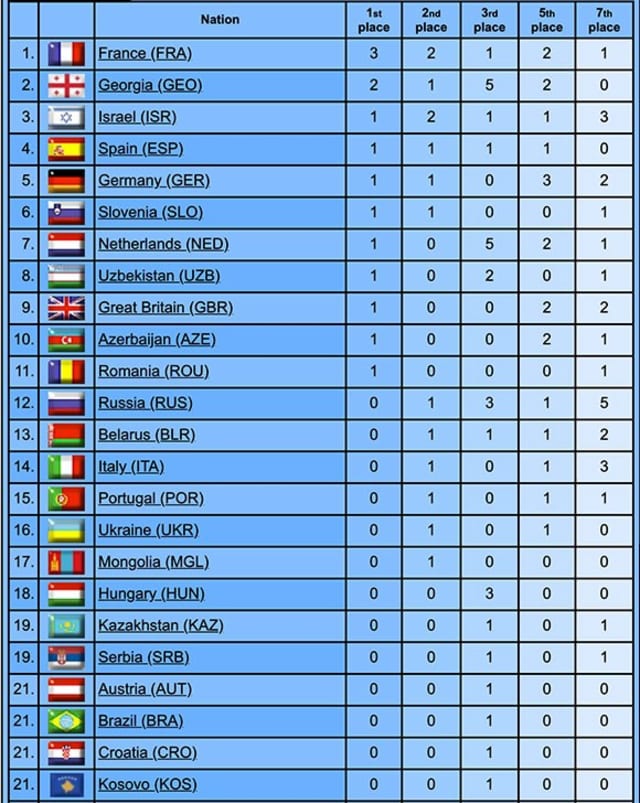 Two gold medals for Georgia, one gold for the Netherlands, France and Germany today and 24 countries on the podium after three days of competition

The first category in contention is the hunting ground of Nikoloz SHERAZADISHVILI (ESP), world champion in 2018. The Spaniard came out of a year of drought looking to win the title and showing very good manners. "The word that sums it up is perfection," declared Niko, as he is called on the World Judo Tour. "Physical, technical and tactical perfection is always the aim.” The truth is that, from the first fight against Li KOCHMAN (ISR), the Spanish defeated all his opponents by ippon. In the final he faced Lasha BEKAURI (GEO), eighth in the ranking, and the outcome was different from the expectation. 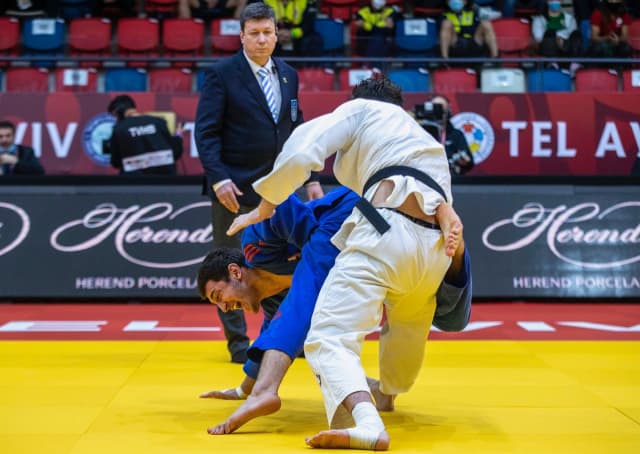 Bekauri is a typical product of the Georgian school: powerful, agile, clever and combative. He is a junior world champion and throughout the day he demonstrated a stratospheric level. In that last fight against SHERAZADISHVILI it was BEKAURI who had better sensations, winning by waza-ari and putting his name among the favourites for the world and Olympic titles. “We are both right-handed and Niko is extremely strong,” explained the Georgian. "Fighting him is very tough." 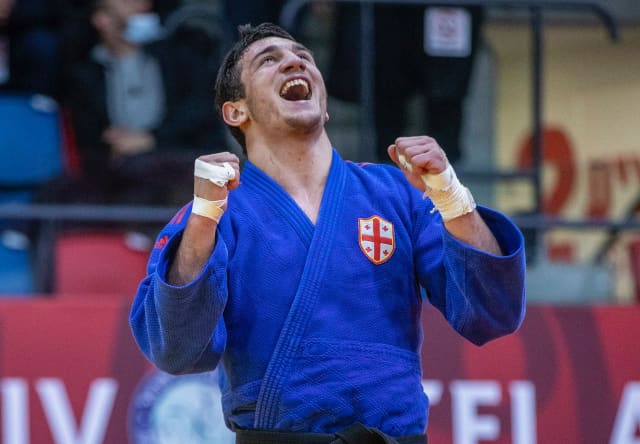 The first bronze medal bout featured two veterans from different backgrounds. The champion of two grand slams and five grand prix, Krisztian TOTH (HUN), beat Milan RANDL (SVK), whose record is much more modest. It was the victory of hierarchy and no one thought it strange.

The second bronze medal was an opposition of styles. On the one hand, Beka GVINIASHVILI (GEO), a force of nature. From another, Mammadali MEHDIYEV (AZE), taller and more technical. In Tel Aviv nature prevailed. 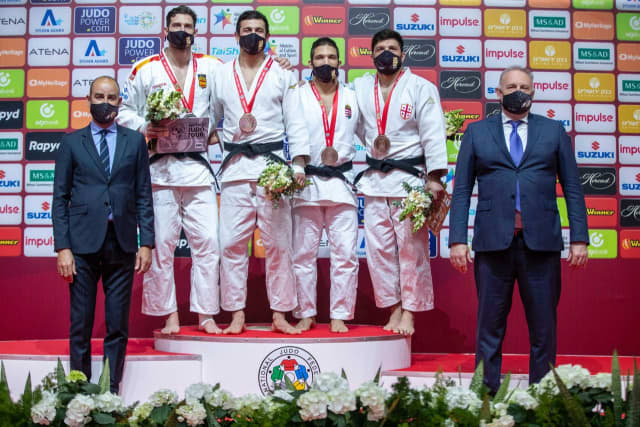 Medals and flowers were presented by Dr Laszlo Toth, Member of the IJF Coordination Committee of Directors and President of the Hungarian Judo Association and Mr Kfir Iluz, Executive Director of COMTEC Group 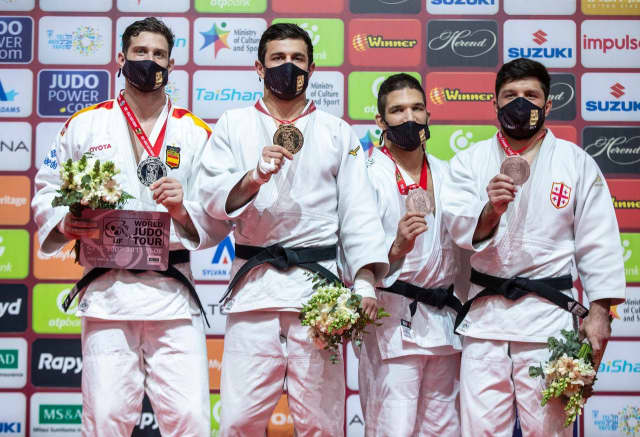 France and Germany put the Franco-German friendship into brackets for a day. Each of the two semifinals presented a French and a German. The first to hit was Fanny Estelle POSVITE (FRA). The 28-year-old Frenchwoman has reached her full maturity and for two years, with a couple of exceptions, has not stepped off the podium. Posvite overcame all the obstacles that came her way. In the semifinal, she eliminated Luise MAHLZAN (GER) and continued on her course, next against Anna Maria WAGNER (GER), who had just defeated Posvite's compatriot and a silver medalist at the Rio Olympics, Audrey TCHEUMEO (FRA). It was a tough fight that was close to breaking the foundations of the European Union. The German won in golden score by hansokumake. 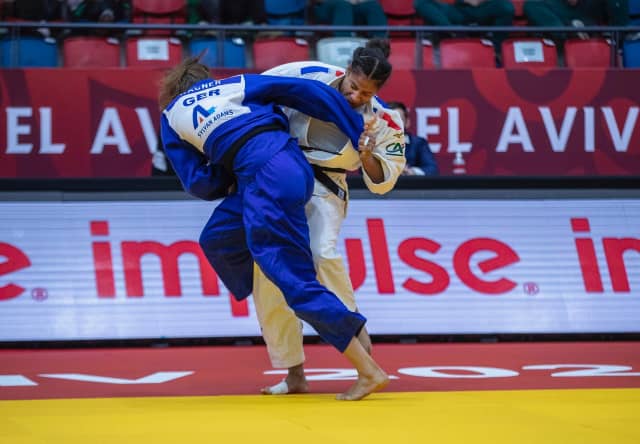 Before the medal ceremony, the German cried and explained why, “They were not just tears of joy at having won. In Doha I was frustrated with my judo and I know that if I feel good I can beat anyone. Today I have shown it." 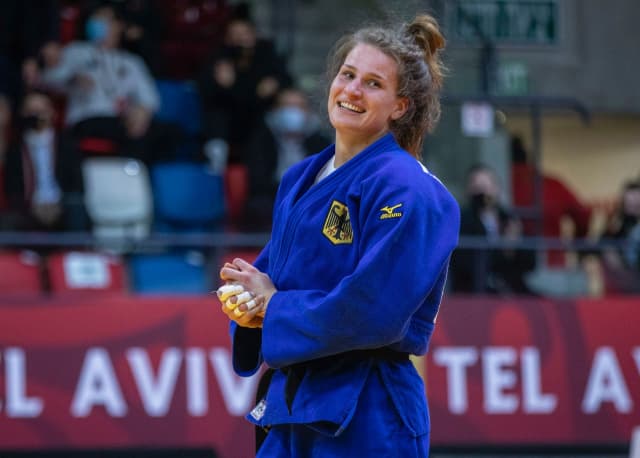 MAHLZAN and TCHEUMEO also did not collect the remains, in the form of bronze medals, because they were defeated respectively by Carla PRODAN (CRO) and Marhinde VERKERK (NED). 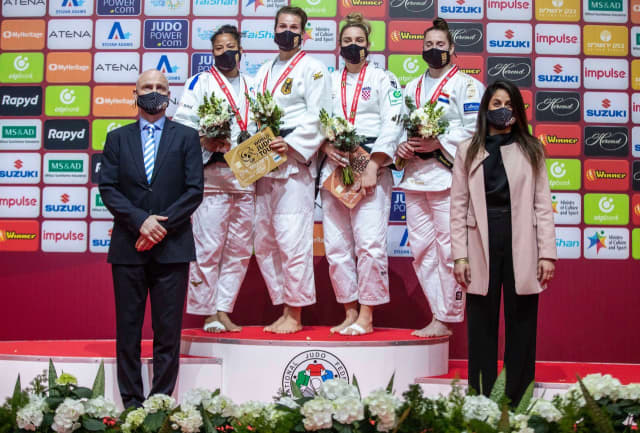 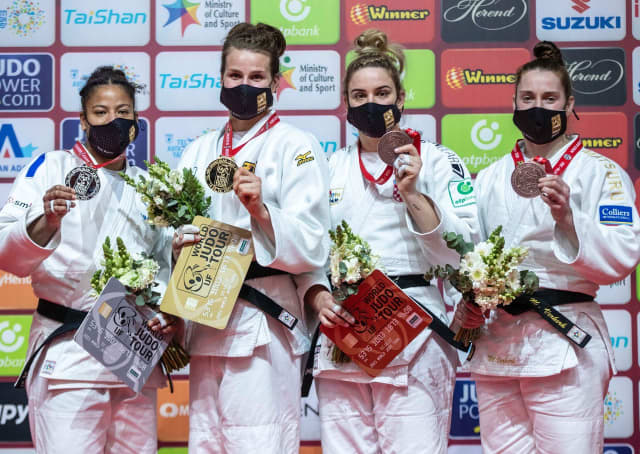 -100kg: Not in my House, or Maybe Yes The world number one Varlam LIPARTELIANI (GEO) and the current world champion Jorge FONSECA (POR) did not travel to Israel, nor the fourth in the world ranking CHO Guham (KOR), but the local idol and world number two Peter PALTCHIK (ISR), as well as world number five Michael KORREL (NED) were there. They asserted their stripes in a gentle, uncomplicated manner. The two judoka imposed their judo in all the fights of the day and reached the final with total normality. 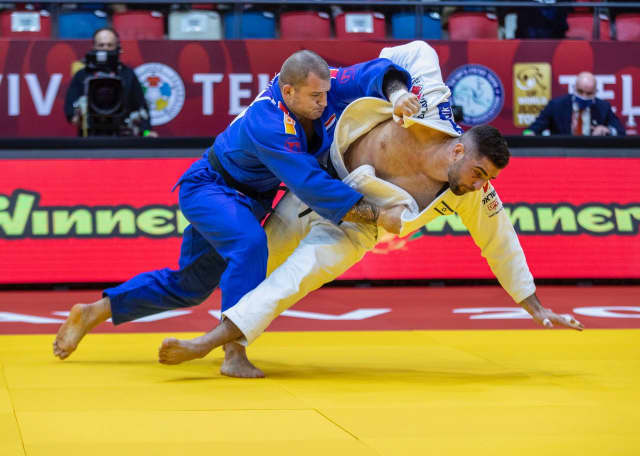 In general KORREL is more aggressive, with a very offensive attitude. PALTCHIK is more refined, powerful but neater. It was a clash of enormous intensity that reached golden score. They each had two shidos and Korrel didn't seem at all distracted by the atmosphere. Calm and confident, he finished the job with a waza-ari, dashing Paltchik's hopes of winning twice in a row at home. 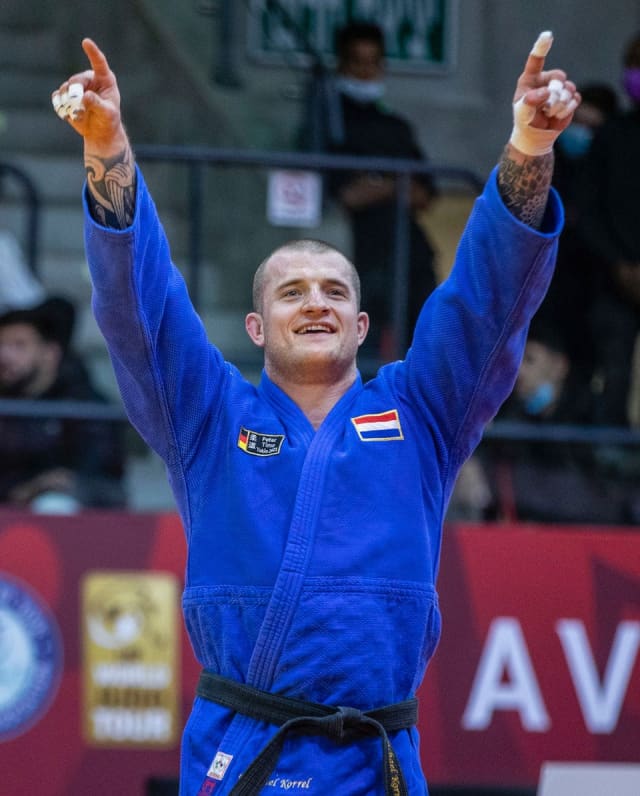 "I summarise my journey in a few words," KORREL told us later. “I am back on track.”

The Georgian team did not bring all of their stars to Israel, but they have a quarry that seems limitless despite the size of the country. It is a team so attached to judo that it always aspires to achieve medals in any competition and, before fighting for bronze, it had already won a gold and a bronze at -90kg and had another bronze guaranteed. The same can be said of Azerbaijan and, as for Russia, the largest country on earth, is a historical judo power. With such credentials, medals, even bronze, were expensive. The first flew to Russia with the magnificent ILIASOV. Logically, the second set course for Tbilisi, hanging from SULAMANIDZE's neck. Georgia thus continued its harvest of medals. 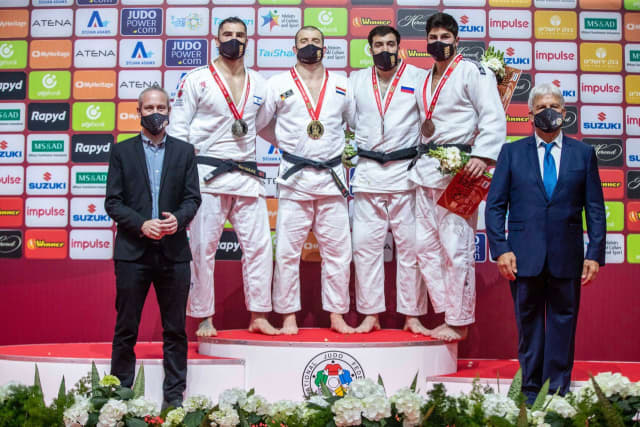 Medals and flowers were presented by Mr Hili Tropper, Minister of Culture and Sports of Israel and Mr. Moshe Ponte, Member of the IJF Coordination Committee of Directors and President of the Israel Judo Assocation 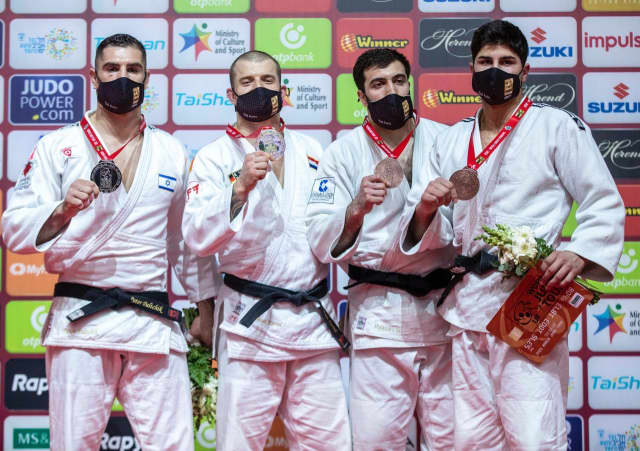 +78kg: French Style If there is a team that everyone envies, it is France, in its women's categories. It has three current world champions and, in the heavyweight category, it has found a rare pearl in the form of Romane DICKO (FRA). She is the girl of the moment, 21 years old and a marvel of strength and technique. Before Tel Aviv Dicko has won the last four tournaments in which she has participated and those are big words. In the final she faced Rochele NUNES (POR), who presents a very different profile. Ten years older, the Portuguese woman does not usually win gold medals but perseveres and is subscribed for bronze. She was defeated by DICKO in a final that lasted twenty-five seconds, as if the young French woman were in a hurry or not wanting to break a sweat. Her victory was the testimony of youth, overwhelming any hint of seniority. 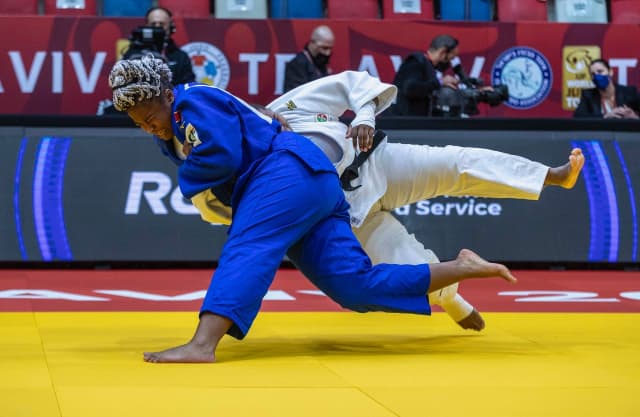 “What I liked the most is that I managed to execute all the movements that I work on during training. That means I'm on the right track,” DICKO explained, although, more than a road, it seems like a highway to more gold. 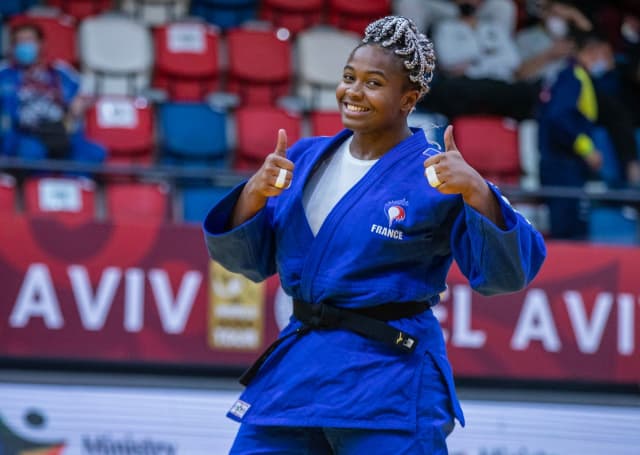 At 29, Maryna SLUTSKAYA (BLR) no longer has anything to prove. She has a good collection of medals and remains unchanged among the top ten in the ranking. In Tel Aviv she added one more by defeating Jasmin GRABOWSKI (GER) in the first contest for the bronze medal.

Maria Suelen ALTHEMAN (BRA) has three more years, many more medals and a better ranking, since she is world number three. Altheman beat Melissa MOJICA (PUR) in record time. For once, the +78kg women settled their unfinished business faster than the rest of the categories. 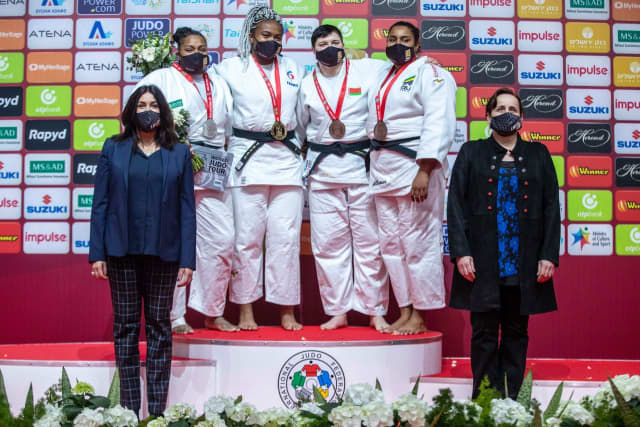 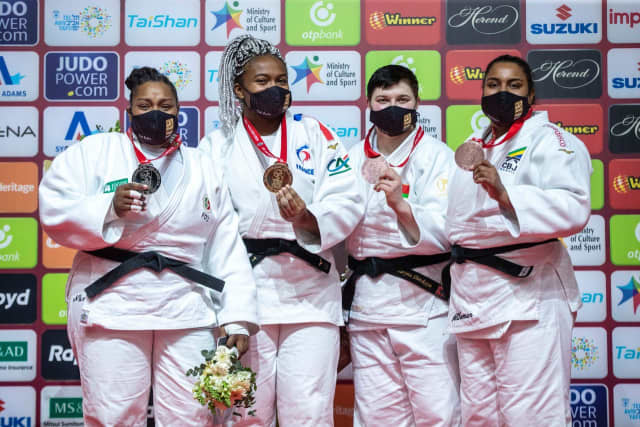 +100kg: Not the Usual Suspects In the heaviest category, there was a real slaughter. The two favourites, Lukas KRPALEK (CZE) and Guram TUSHISHVILI (GEO) were eliminated early, much too early if they plan to dethrone Teddy RINER (FRA), undisputed king of the category. The Georgian tied up the bronze but left with a bittersweet taste in his mouth. 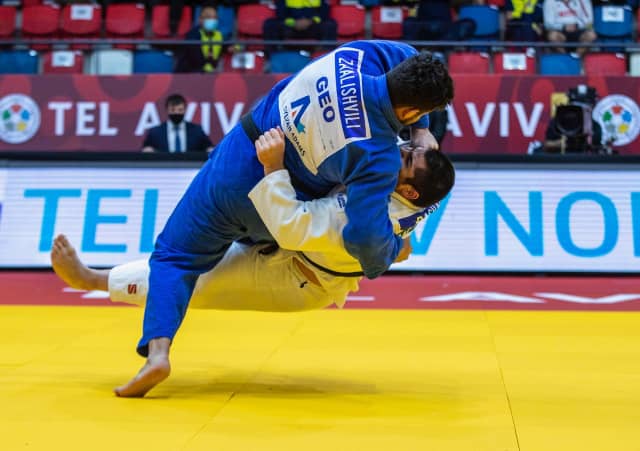 The Netherlands was another country that left Israel satisfied, thanks to the medals achieved in the last two days; the most recent, bronze, by Jur SPIJKERS.

The final crowned Gela ZAALISHVILI (GEO) for the second time in a Grand Slam, who defeated Tameraln BASHAEV (RUS) and underpinned a glorious day for the proud Georgian team, with two golds and as many bronzes. 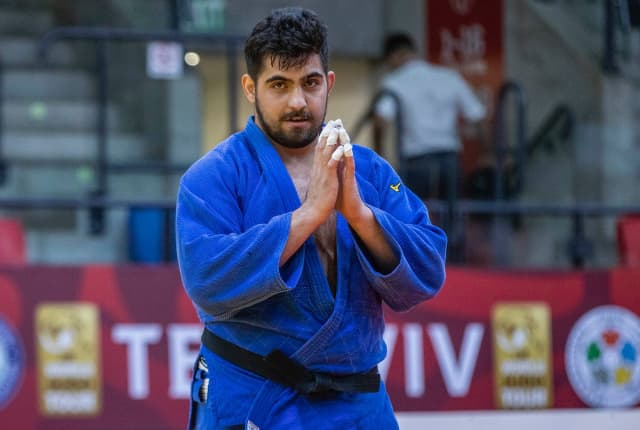 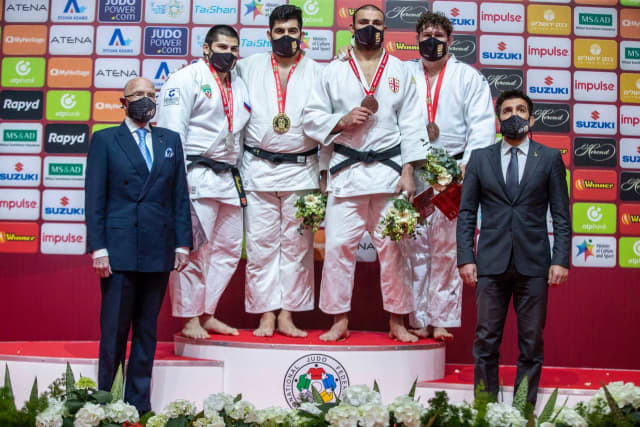 Medals and flowers were presented by Mr Alex Gilady, IOC Member and Vice Chair of the Coordination Commission for the Games of the XXXII Olympiad - Tokyo 2020 and Mr Giuseppe Maddaloni, IJF Refereeing Supervisor & Olympic Champion 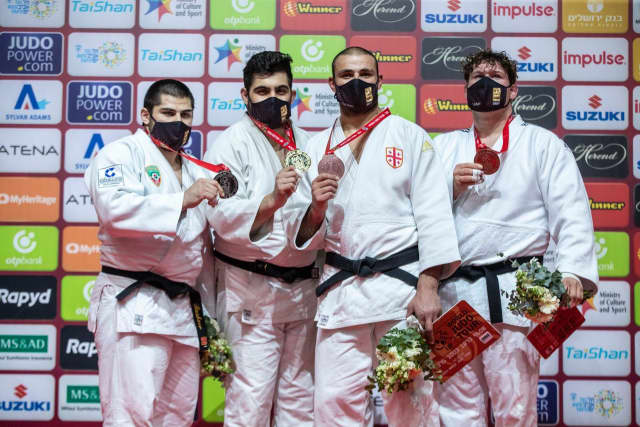 It has not been an anodyne week; it never is on the World Judo Tour. As the paths of our sport are inscrutable, what seems obvious never is and there is no guarantee of success for anyone. For the rest and to make it short, it has been a matter that has to do with Joy, Union, Deference and Organisarion, which is to say, with J.U.D.O.