Written by Nicolas Messner, Jo Crowley on 19. Feb 2022
Photographs by Gabriela Sabau, Emanuele Di Feliciantonio
Share
The third day of the third World Judo Tour event of 2022 is at an end and as always Tel Aviv has filled our hearts. There is no welcome like the one we find in Israel. We have seen that through the event the home crowd have supported their athletes, no matter what and this is wonderful for the judoka. We are sure they feel the pressure but they also feel the adoration and that is important.

Maybe Israel would have liked more homegrown medals but judo is, as ever, unpredictable and we are sure that the five medals in Tel Aviv will only build as the year progresses.

The final medal standings are diverse and interesting and still with a healthy mix of the mainstays and the heirs sprinkling themselves through all categories. There is no sign just yet if the settling of the teams, no sign that decisions have been made towards Paris success in 2024; it’s all still exploratory and leaves everything to play for. For us, that’s a treat, a guarantee of surprises and spectacular judo at every event. 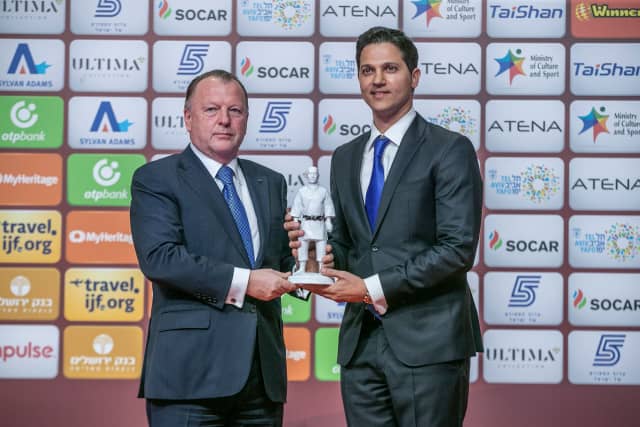 Already second in Paris less than two weeks ago, the Azeri Mammadali Mehdiyev, seeded number one here in Tel Aviv, is in good shape for sure, evidenced by his entry into the final once again. If Nemanja Majdov (SRB) was not among the big favourites of the competition, he is not a stranger, since he was world champion in 2017 in Budapest. Since May 2019, he had not entered the final of a grand slam though. Here he is back at the highest level and that is good news. 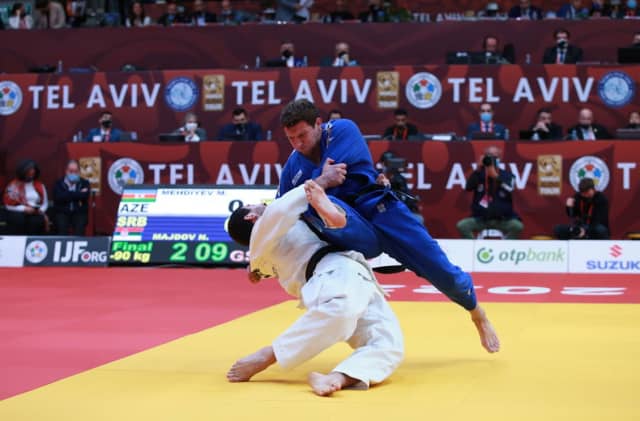 These athletes totally neutralised themselves during normal time and had to enter the golden score period with one shido a piece, which was doubled a fews seconds later. 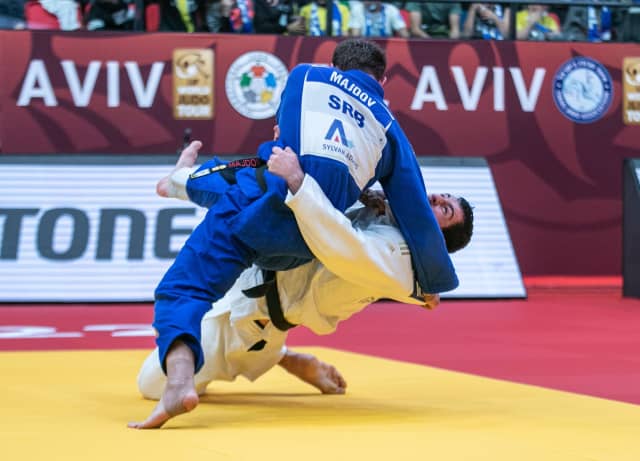 No more mistakes allowed! It took over two minutes of extra time for Mehdiyev to finally find a way to throw his opponent. He did it well indeed, with a powerful counterattack. Majdov who prior to that had been really careful, didn't pay attention and while he was trying to grab Mehdiyev, the latter immediately turned and threw him with ura-nage; no discussion! This was ippon. 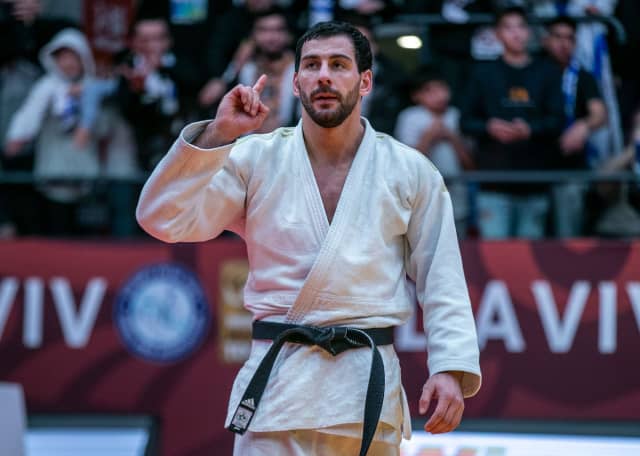 Jesper Smink (NED), winner of the first Grand Prix Portugal, at the very start of the season, is again present in the final block, against Ivan Felipe Silva Morales (CUB), seventh in Paris at the beginning of the month, for a place on the podium. After an intense match, where even though the two athletes were penalised with two shido apiece, it was Ivan Felipe Silva Morales who won the medal with a waza-ari scored from an o-uchi-gari.

Mihael Zgank (TUR) and Erlan Sherov (KGZ) battled for the second bronze medal. Having just a shido to his name, Mihael Zgank did not panic and scored a first waza-ari with soto-makikomi. It took him two attempts to conclude with an immobilisation for ippon. This is the third medal in a grand slam for Mihael Zgank. 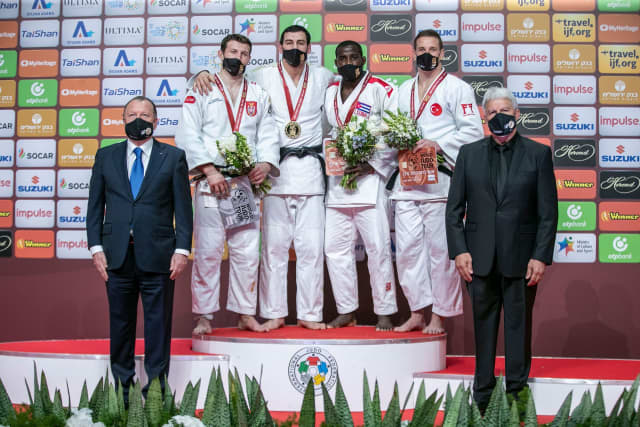 Medals, cheques and flowers were presented by Mr Marius Vizer, President of the International Judo Federation and Mr. Moshe Ponte, Member of the IJF Coordination Committee of Directors and President of the Israeli Judo Assocation 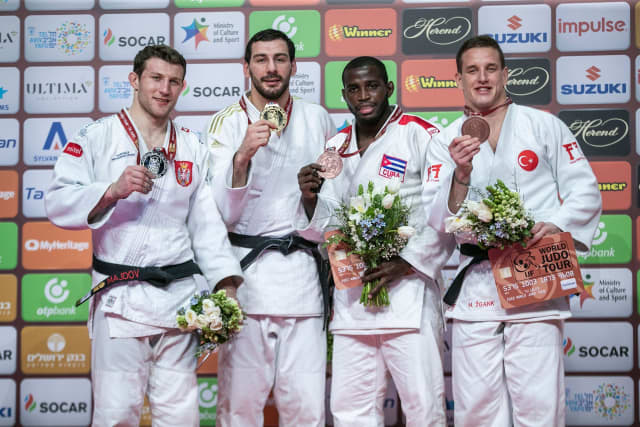 The category started with a big bang with the early elimination of Madeleine Malonga (FRA). Cruelly lacking in rhythm, her power was of no use against Patricia Sampaio (POR) who let the storm pass at the opening of the match before rolling the tall Frenchwoman and pinning her down for ippon. It was a disappointment for Malonga who will have to return to work to find the level which is really hers and which led her to become world champion 3 years ago. Taking advantage of the opening of the road by the Portuguese, it was finally Alina Boehm (GER) who took the opportunity to reach the final, against Beata Pacut (POL), the 2021 European champion. 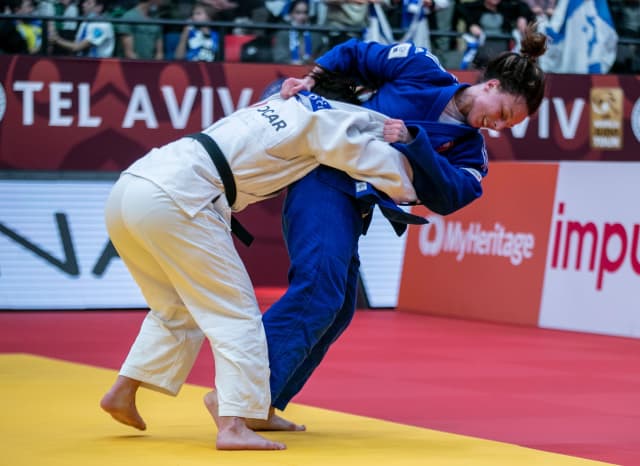 Both competitors were fully engaged and wanted to win. Not able to throw, it was eventually the penalties that made the difference and it was Beata Pacut who won her first ever gold medal in a grand slam. 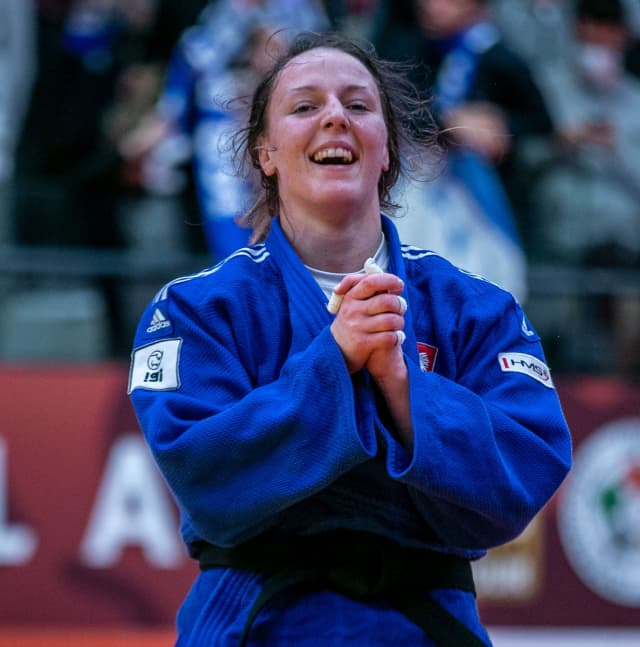 Patricia Sampaio (POR) qualified for the bronze medal match against Giorgia Stangherlin (ITA), without reference at this level of competition for the moment. After a first waza-ari scored with a soto-makikomi, she later one pinned down Stangherlin for ippon to win her first medal in a grand slam.

In the second match for a bronze medal, Guusje Steenhuis (NED) and Alice Bellandi (ITA) battled for the podium. Alice Bellandi quickly took the lead with a magnificent seoi-nage that was rewarded with an ippon but video showed that the landing was not totally flat on the back, so it was downgraded to waza-ari. Alice Bellandi continued to put pressure on her opponent. It was a masterpiece of a low tai-otoshi for a clear ippon next that eventually gave her the victory and a first medal in a grand slam. 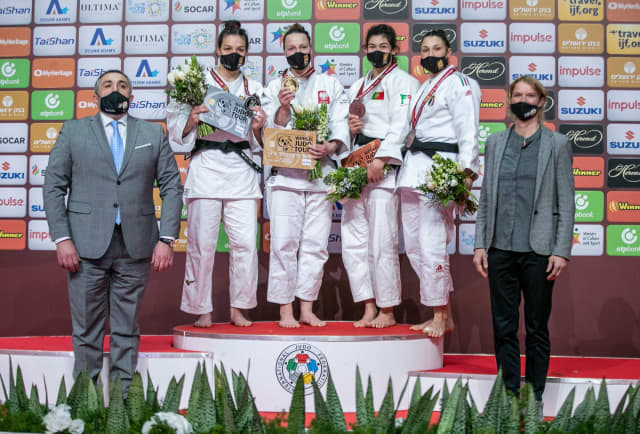 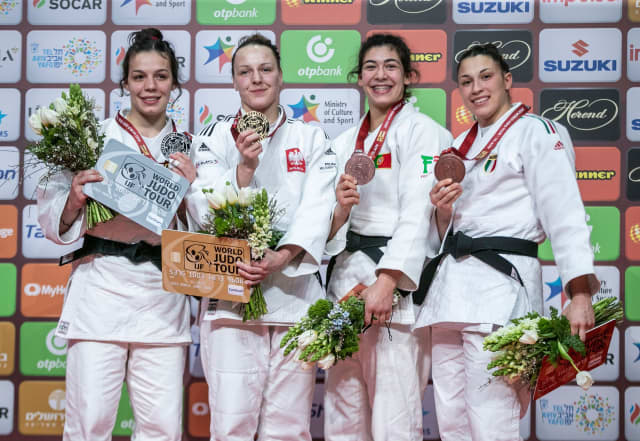 It was undoubtedly the most anticipated category of the day, with the smooth entry of Peter Paltchik. Obviously he is the darling of the public because hundreds of spectators were already present an hour before the start of the competition, to encourage him as he walked on the tatami. Despite this flawless support and the 'Peter, Peter, Peter' which was chanted by the public, Paltchik did not manage to reach the final, since he was eliminated by an exemplary, powerful Michael Korrel (NED) in the semi-final. The latter found in front of him in the final Ilia Sulamanidze (GEO), only twenty years old and already seeded number two in the tournament. 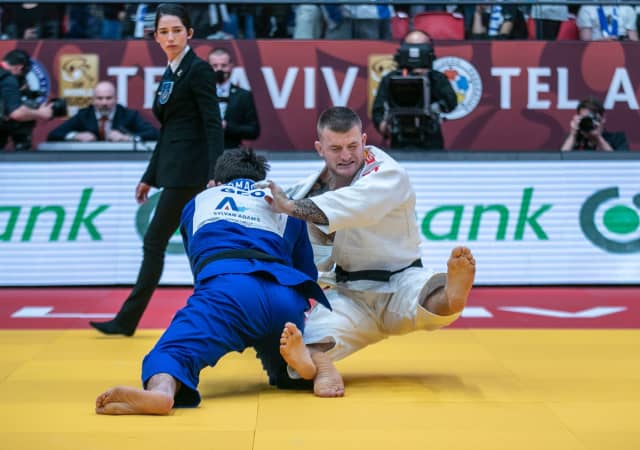 If the first part of the match was well balanced, suddenly Ilia Sulamanidze executed the perfect o-soto-otoshi that sent Michael Korrel to the ground for ippon. This is medal number one in a grand slam for the Georgian. Knowing his young age, this is probably not the last one; a competitor to be followed in the years to come. 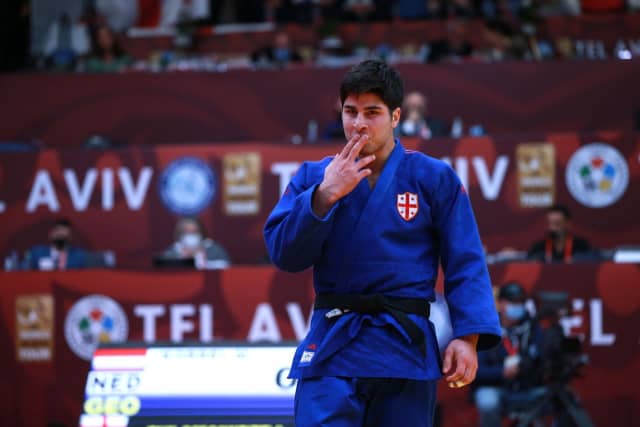 155th in the world ranking, Eduard Serban (ROU) took on local star Peter Paltchik (ISR) for the second bronze medal. It was hardly possible to talk to your neighbour as Peter Paltchik entered the venue and it required some courage for Serban to compete under so much pressure but he went on the tatami and competed in his most important match so far, putting all his heart into it and pushing Paltchik to golden score. Eventually Eduard Serban was penalised a third time, the victory going to Paltchik. This released all the celebratory pressure that the public wanted to share and the whole stadium sang for many long minutes to recognise their champion. 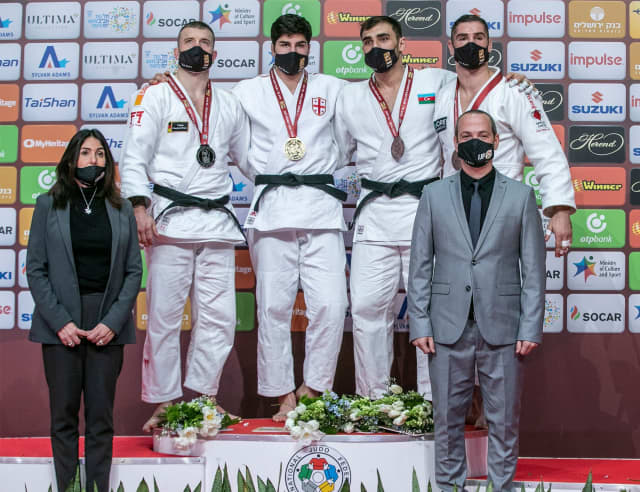 Medals, cheques and flowers were presented by Mrs Miri Regev, Member of Knesset of the State of Israel and Mr Noam Greenberg, CEO of the Israeli Judo Association 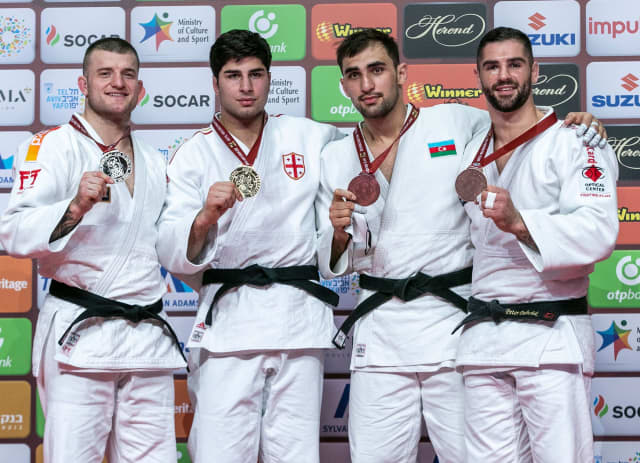 Luckily for Romane Dicko (FRA), she did not follow the example of her compatriot Malonga and won without worry, right through the eliminatory phases to infiltrate the final of the +78kg category. It must be said that Dicko has become a really safe bet for the French delegation. Second in Paris less than two weeks ago, she only saw the gold slip away from her fingers because of a small error against the Japanese judoka. After eliminating Julia Tolofua in the semi-finals, in a Franco-French match, she was opposed by Beatriz Souza (BRA) in the final. 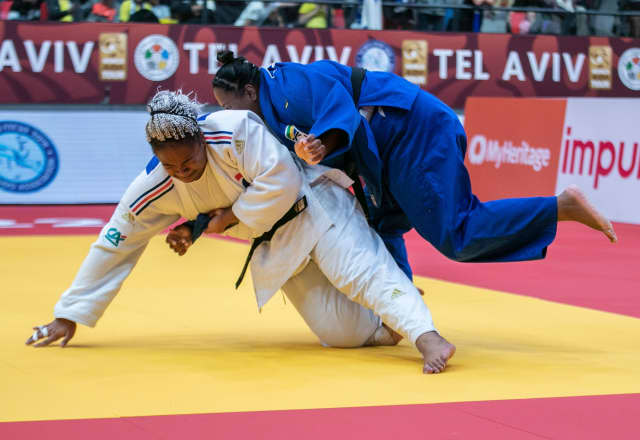 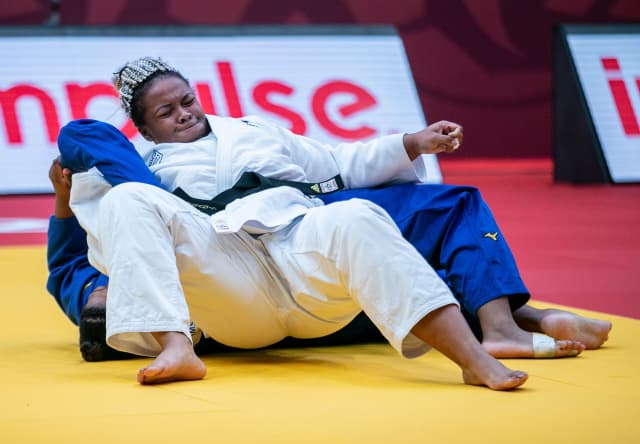 The two athletes played a well balanced finale until the last moments, Beatriz Souza offering a good opposition to the French champion. The most important part for her was not to make any mistakes, like in Paris two weeks ago and she didn't. Waiting patiently, she overturned Souza to pin her down with a ushiro-kesa-gatame for ippon. This time the medal is made out of gold. 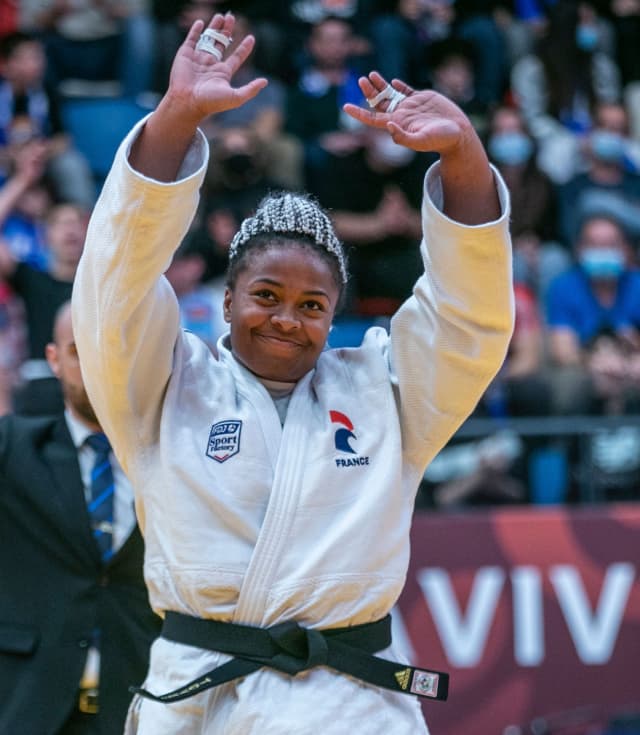 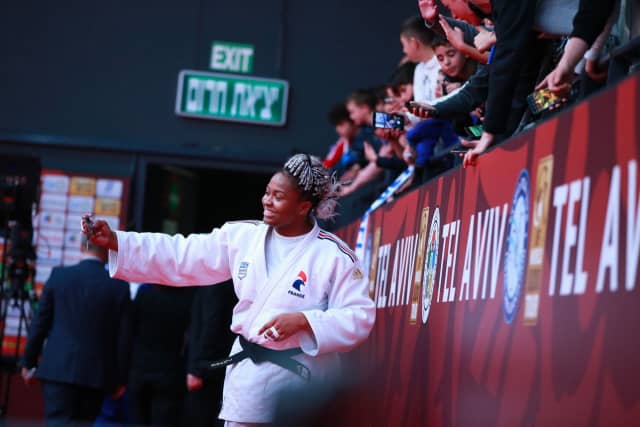 The Israeli public had one last chance to support a national athlete for a medal with Raz Hershko (ISR) who qualified for the bronze medal match against the third-placed athlete in Portugal a few weeks ago, Adiyasuren Amarsaikhan (MGL). The match was long including the golden score period but Raz Hershko was finally able to enjoy winning the medal in front of her public, who gave her a massive round of applause.

Nazgul Maratova (KAZ) and Julia Tolofua (FRA) battled for the second bronze medal. After rolling her opponent, Julia Tolofua concluded with an immobilisation to win her fourth medal in a grand slam. 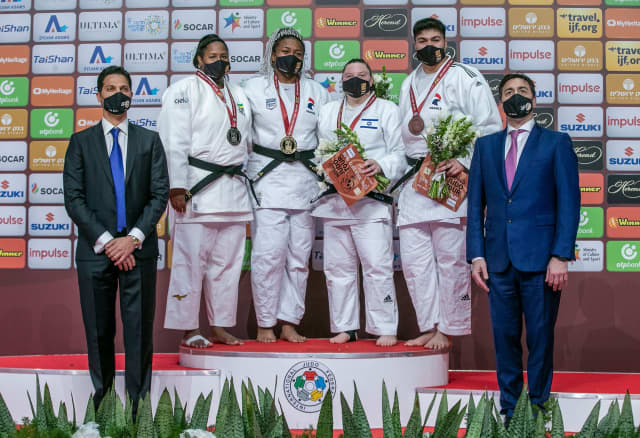 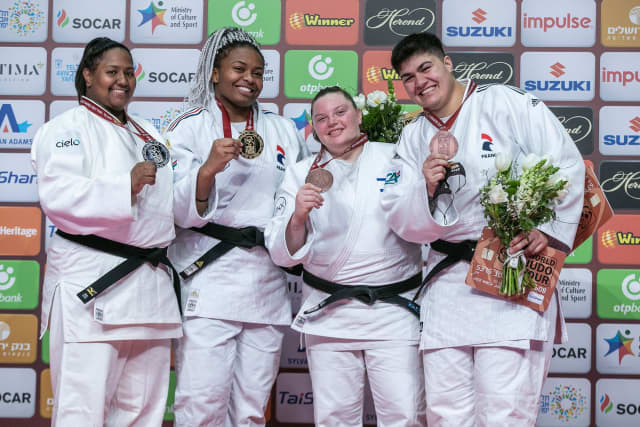 It was two regulars at major international events and collectors of medals who found themselves in the final. On one side, the Brazilian giant Rafael Silva, twice an Olympic medallist and multiple world medallist. On the other, strong and as fast as lightning, was Guram Tushishvili (GEO), 2018 world champion and silver medallist in Tokyo last year. A clash of the Titans was in view. 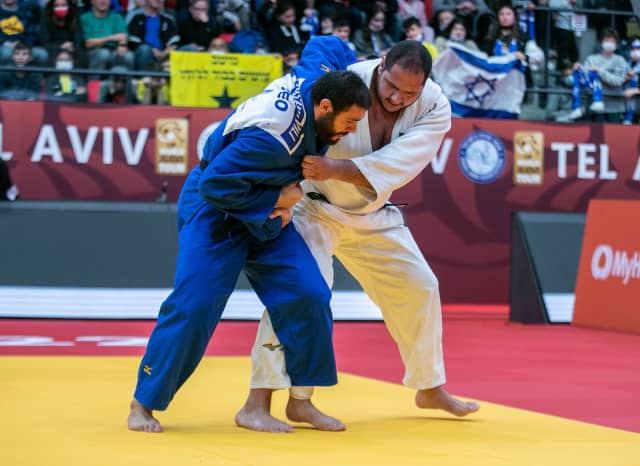 Even if a match involving Rafael Silva always looks like David against Goliath, everyone knows that in this case David is incredibly powerful. Once again, Guram Tushishvili proved it by tiring his opponent until he was penalised for the third time, to win gold. 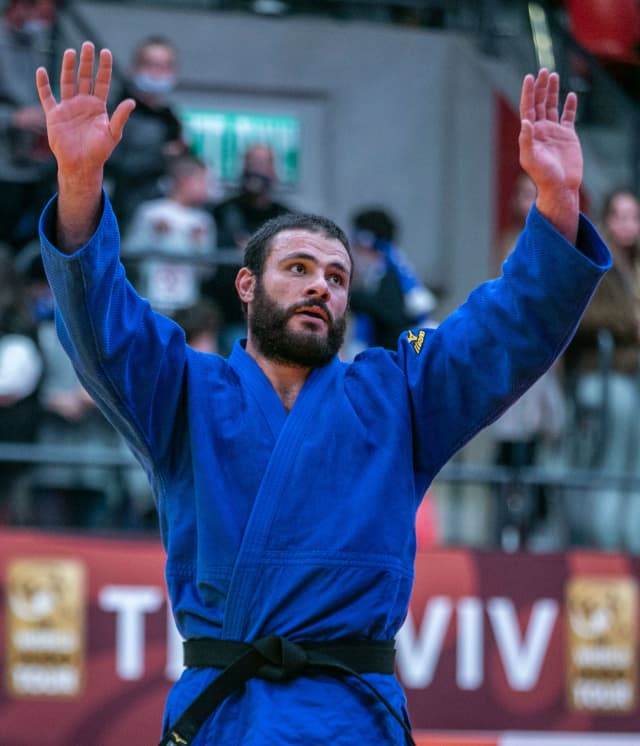 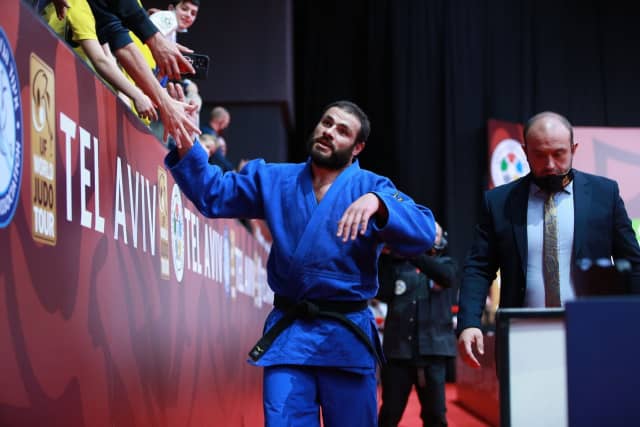 Andy Granda (CUB), third in Tbilisi in 2021 and Temur Rakhimov (TJK), third in Abu Dhabi at the end of 2021, fought for the first bronze medal. After Andy Granda was penalised a third time, the medal went to Temur Rakhimov, the third one of this kind for Rakhimov.

Stephan Hegyi (AUT), bronze medallist in Antalya in 2021 and Onise Bughadze (GEO), 113th in the world, gave themselves the chance to climb on to the podium. To win his third medal in a grand slam, Stephan Hegyi had to drop under the his opponent and perform a left handed tai-otoshi for waza-ari and he did it. 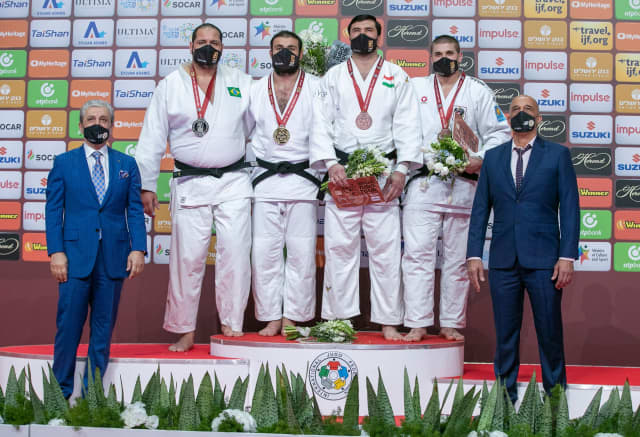 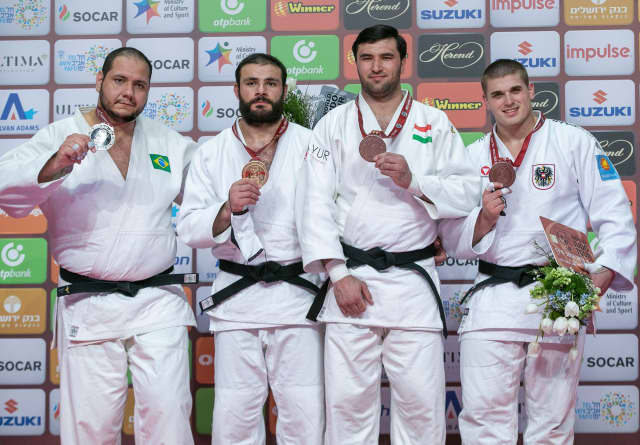