Written by Jakhongir Toshpulatov, Nicolas Messner, Gabriela Sabau on 25. Jan 2020
Share
The 2020 Tel Aviv Grand Prix was already a success before this third day started. Everything, from an organisational point of view, was perfectly orchestrated by Moshe Ponte, the president of the Israeli Judo Association, and his team. The last five categories of the competition (Women's -78kg and + 78kg and men's -90kg, -100kg and + 100kg) did not contradict the impression already well anchored in the minds of all participants. 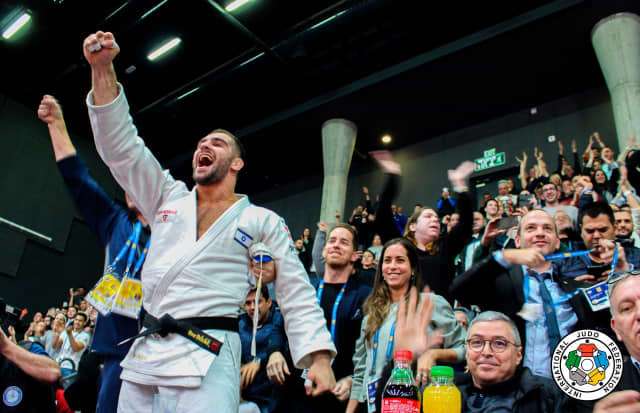 Peter PALTCHIK is celebrating Or SASSON's victory from the stands

To top it all, the Israeli athletes distinguished themselves particularly in the last categories, with the two stars of the day being Peter PALTCHIK and Or SASSON, with the unwavering support of the public. They traced their way to the final, in a style full of finesse and power, that enchanted the thousands of fans. It is often said that public support is a plus and it is undeniable. It can also put extra pressure on the shoulders of local athletes because they want to do well at home. It is certain that PALTCHIK and SASSON did not miss the rendezvous.

A few minutes prior to the last final block of the tournament, world champion Sagi Muki, offered to Sylvan Adams, Co-host of the Tel Aviv Grand Prix and to Moshe Ponte, President of the Israel Judo Association, the World Champion red back numbers.

Sylvan Adams declared: “Sport is a language that everybody understands. It's noble and beautiful. Judo has values that mesh totally with my life concept. I met Ponte three years ago and today I can say that every single sport needs a Moshe Ponte to show them the way to success. I'm happy to be part of the judo family and to be able to support it, because Judo deserves it.“ 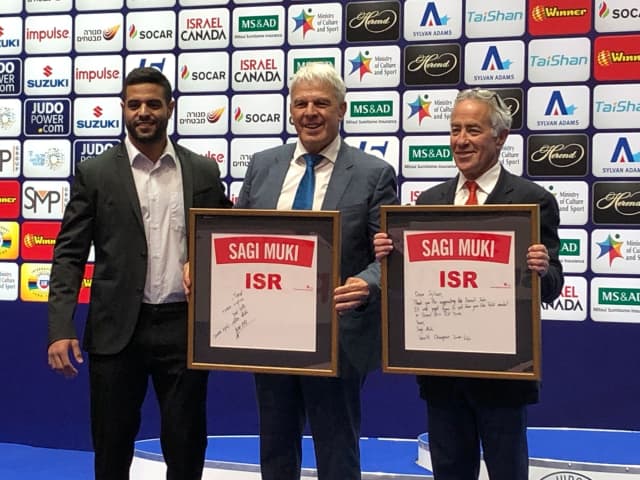 It must be underlined that Mrs Miri Regev, Minister of Culture and Sports, was present along with Mr. Alex GILADY, IOC Member and Vice Chair of the Coordination Commission for the Games of the XXXII Olympiad - Tokyo 2020. Mr. Alex GILADY said: “Tel Aviv is a living city. People here love sports. Judo is reflecting this. This third day of competition is the perfect illustration that judo is successful because there are great judoka who give their best, but also great organisers. I want to congratulate them for everything they do for the sport.“

At the end of an amazing day, the Minister declared: “This Grand Prix in Tel Aviv is one of the most professional competitions that we organise in Israel and I am very happy to see all the judoka who came, from 83 countries, in an Olympic year. I’m very proud of Tal, Peter and Or about their sporting achievements, without forgetting all the other athletes who took part and I am also very proud about the amazing work that Moshe Ponti is doing with his team. They are incredible. I always feel a bit sad about the people who didn’t come and I hope that next year they will be here and see that Israel is a country where we are cherishing peace. Thank you for giving me the opportunity to thank Marius Vizer, who continues to set up judo with a very professional standard and to be a leader, enforcing the Olympic charter in order to keep clean the Olympic movement.“

-78kg: POWELL Scores for the Third Time at a Grand Prix

The first female final of the day pitted the 17th in the World Ranking List, winner of the Tashkent Grand Prix in 2019, Bernadette GRAF (AUT), with the 2017 world bronze medalist, Natalie POWELL (GBR). It took less than two minutes for Natalie POWELL to complete a smoothly led final, thanks to a first waza-ari from a harai-goshi and a flawless ippon via o-uchi-gari. It is the third gold medal at a Grand Prix for POWELL. 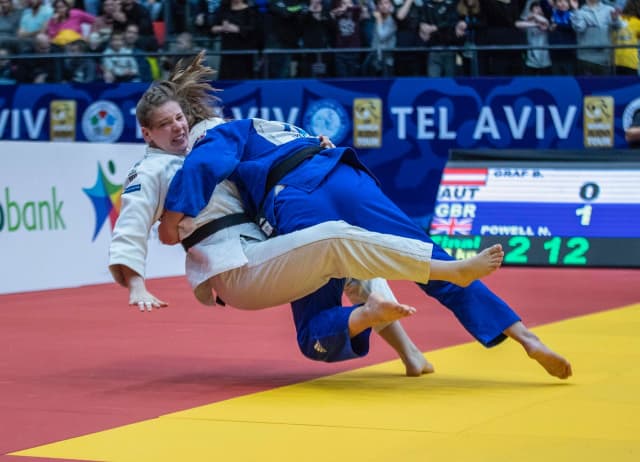 In the first final for the bronze medal, Patricia SAMPAIO (POR), three times world medalist in juniors, found Luise MALZAHN (GER) in her way, whose record on the circuit is established, with an impressive 33 medals. SAMPAIO scored the first waza-ari with o-soto-gari to take the lead. She then controlled the assaults of MALZAHN to win her fourth medal at a Grand Prix. 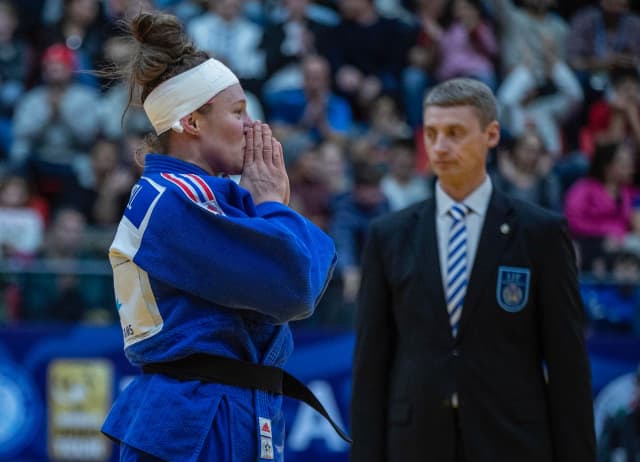 With no medal obtained to date on the World Judo Tour, Patricija BROLIH (SLO) faced YOON Hyunji (KOR), holder of a Grand Slam bronze medal (Tokyo 2012), for a place on the podium. Enjoying a first waza-ari with yoko-tomoe-nage and a second with uchi-mata, YOON won the bronze medal without any problem 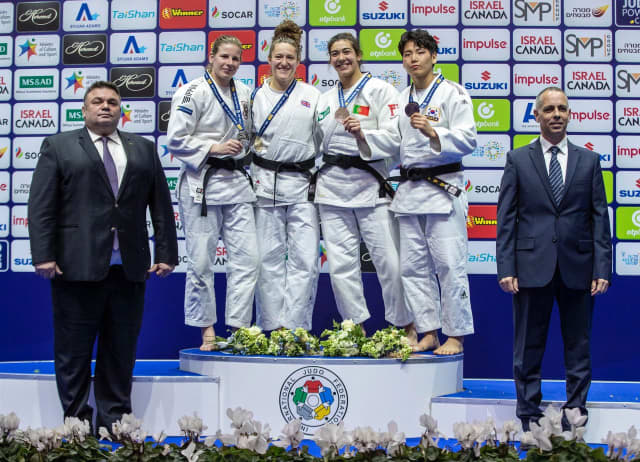 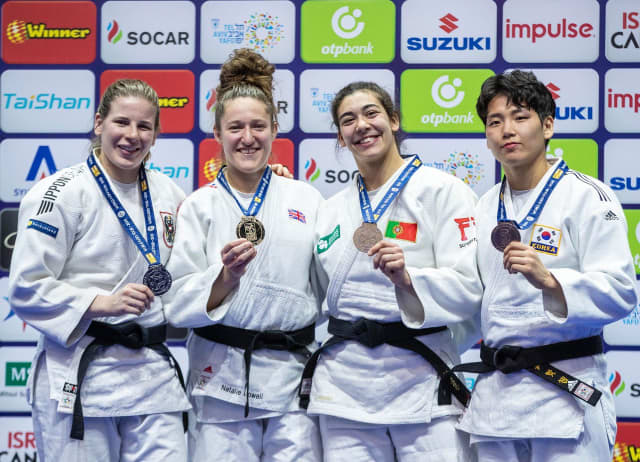 Building on her performance at the 2019 World Masters, during which she won gold, Tessie SAVELKOULS (NED) entered the final against the 2018 European Champion, long injured, but back at the highest level, Romane DICKO (FRA). The French controlled the final and scored ippon with an o-uchi-gari to take a significative win in Tel Aviv. 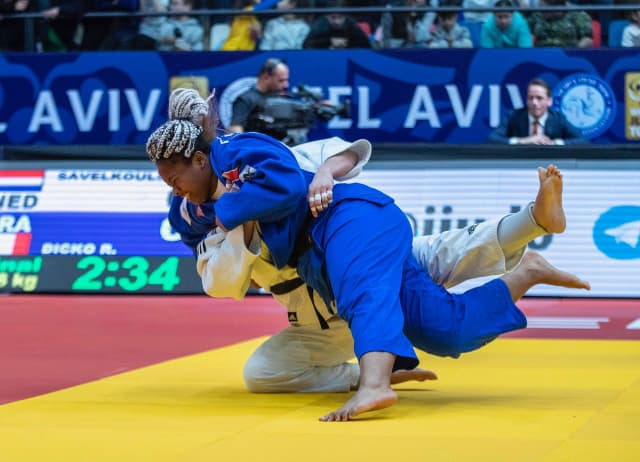 The first bronze medal was disputed between a Grand Slam medalist, from the 2019 inaugural Brasilia tournament, Rochele NUNES (POR) and KIM Hayun (KOR), silver medalist at the 2019 World Junior Championships. As KIM was disqualified after having received three shidos, Rochele NUNES won the bronze medal. 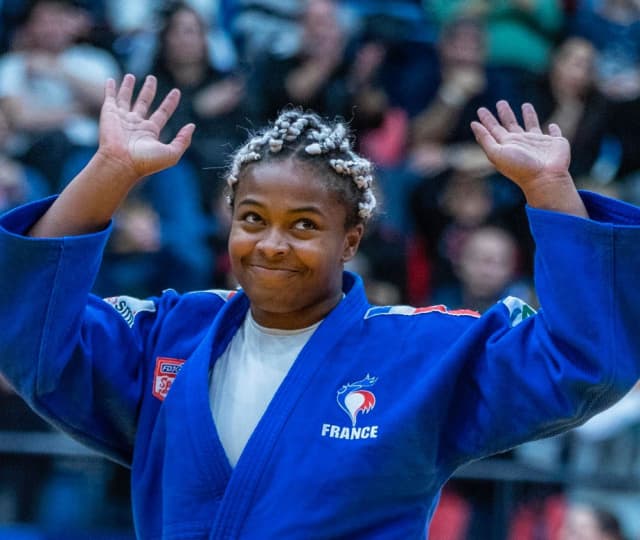 World medalist from 2019 Kayra SAYIT (TUR) and Larisa CERIC (BIH), world medalist in 2018, had undoubtedly come to Tel Aviv for a more beautiful metal, but they had to settle for a bronze medal match. Rapidly SAYIT took the lead with a left handed sasae, immediately followed with an immobilisation for ippon. 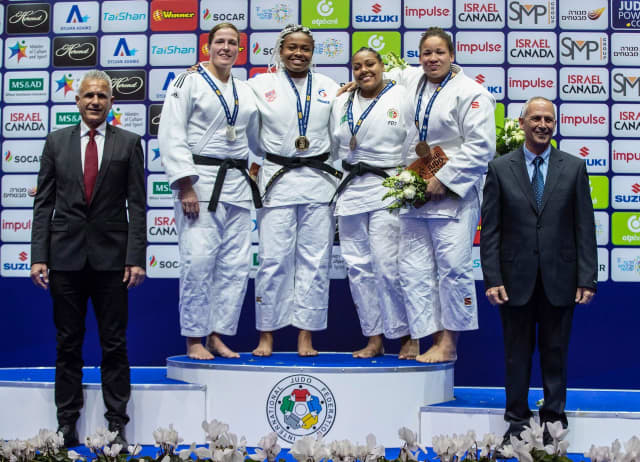 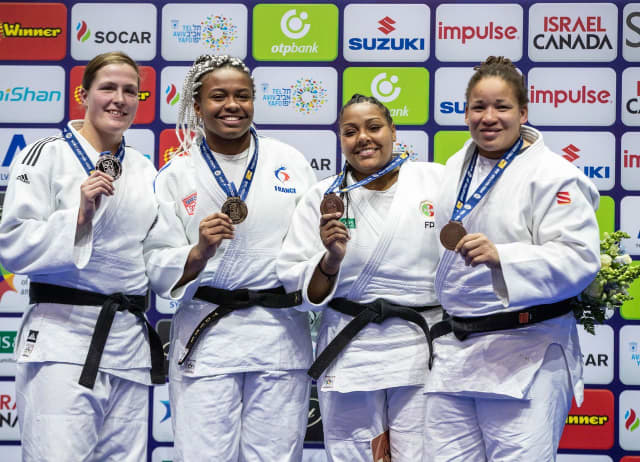 It is obvious that Korea made the trip to Tel Aviv with a great desire for medals. Having already won two gold medals on the first day of competition, the Country of the Morning Calm once again placed several athletes in the finals of the last day. The first of them was the 2015 World Champion and 2019 Paris Grand Slam winner, GWAK Donghan (KOR), bearing Mikail OZERLER (TUR), bronze medalist from the last Qingdao World Masters in China, at the end of 2019. If the score seemed tight after four minutes of regular time, GWAK seemed to be in control. However, he had to wait for golden score to design a superb waza-ari, with a shoulder technique. 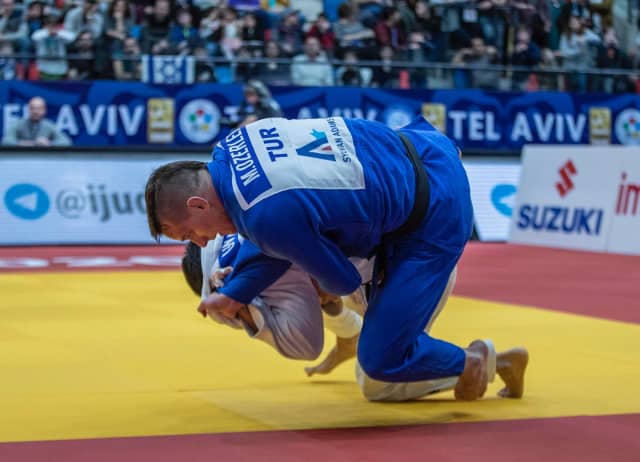 The first bronze medal was decided between Piotr KUCZERA (POL), holder of three Grand Prix medals so far, and Davlat BOBONOV (UZB), who saw himself already in the final but who was eliminated in the semifinal by the Turkish athlete, OZERLER. After each judoka received a shido for passivity, KUCZERA was the first back to action with several spectacular left-handed uchi-mata attempts that unbalanced BOBONOV but couldn't send him to the floor. The Uzbek was penalised a second time. It is with two shidos to his name and one to KUCZERA that BOBONOV entered the golden score. After 37 seconds, KUCZERA eventually countered one last attack from the Uzbek, to win his fourth medal in a Grand Prix. 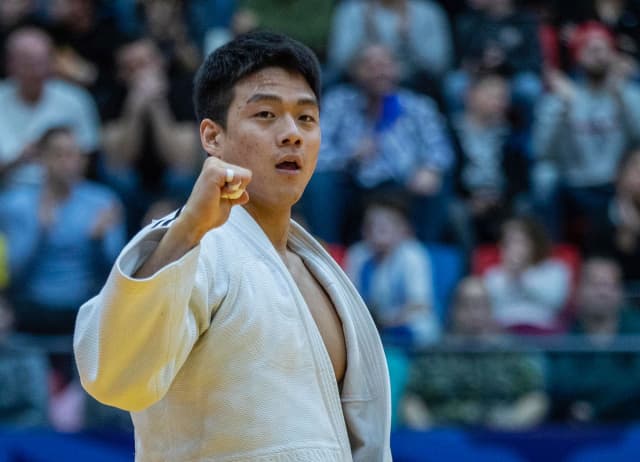 With his sumi-gaeshi and powerful ground work sequences, Marcus NYMAN (SWE) entered the bronze medal match, where he faced the 2014 Junior World Champion, Rafael MACEDO (BRA). At the halfway point MACEDO scored a waza-ari with an almost magical shoulder movement (morote-seoi-nage), that was very close to scoring ippon. He replicated the exact same technique a few seconds later and this time for a clear ippon, that propelled NYMAN into the sky of the Shlomo Arena. 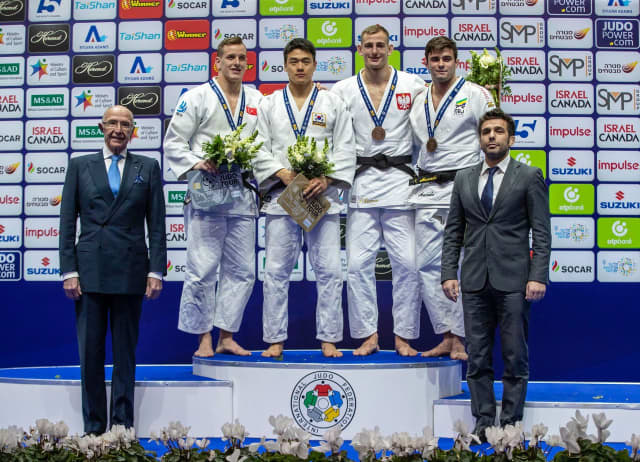 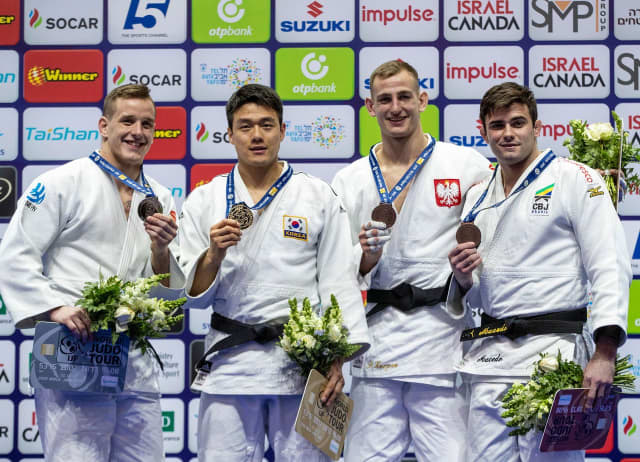 The first of the two most anticipated finals of the day, positioned the silver medalist of the World Junior Championships 2015, Leonardo GONCALVES (BRA), and the world number 7, Peter PALTCHIK (ISR) against each other, Peter supported by a whole people. A little slow at the beginning of the day, PALTCHIK gradually increased in power to deliver an anthology match in the semi-final against world medalist Karl-Richard FREY (GER). A little more discreet or less under the scrutiny of the public, GONCALVES traced his route, without trembling, to face the Israeli. 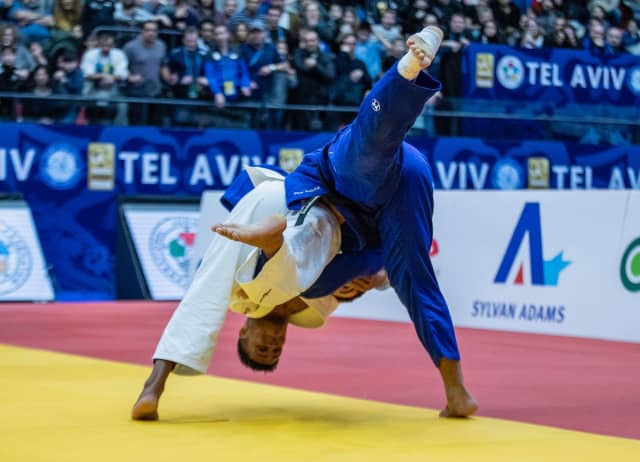 The first big fright for the Israeli camp came when GONCALVES launched a superb harai-goshi, that sent PALTCHIK flying in the air, but he escaped miraculously to land on his stomach. Dominated by his opponent physically and technically, but more present tactically and supported unconditionally by the audience, PALTCHIK found the only opportunity at his disposal to score a liberating waza-ari to take the lead. It only remained for him to control the fierceness of his opponent for very long seconds before the audience exploded with joy and celebrated for long minutes. 'Peter, Peter, Peter', chanted thousands of spectators. The echoes of their song will resonate for a long time in Tel Aviv. 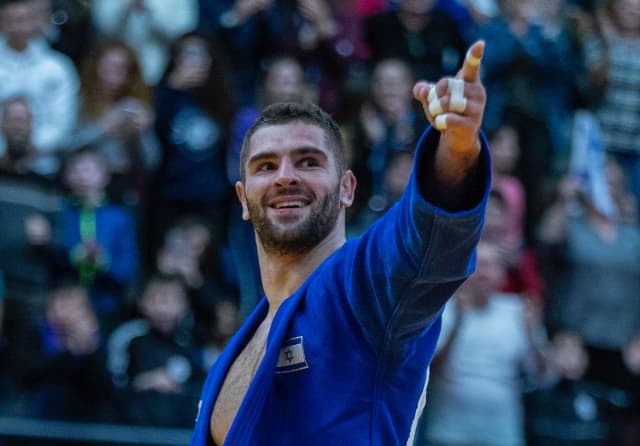 The first bronze medal match was contested by Kacper SZCZUROWSKI (POL) and the double world medalist, Karl-Richard FREY (GER), barely recovered from his semi-final against Peter PALTCHIK, but he recovered enough to win as SZCZUROWSKI was disqualified after having been awarded with three shidos. This is the 15th medal at a Grand Prix for FREY. 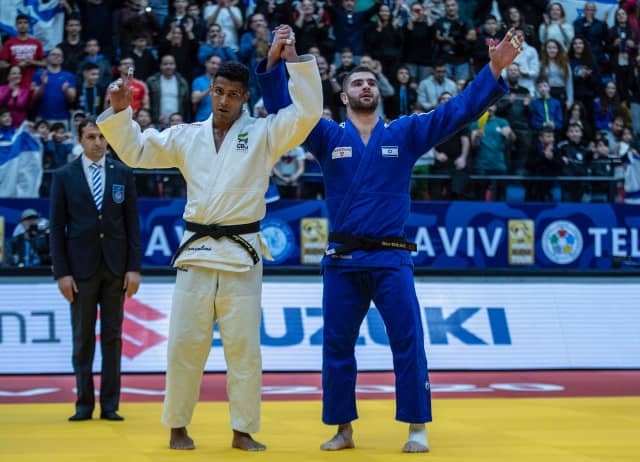 In the second match for the bronze medal, Rafael BUZACARINI (BRA), silver medalist in Brasilia in 2019, met Daniel MUKETE (BLR), U23 European Champion in 2019. One minute before the end, Rafael BUZACARINI scored a first waza-ari with a shoulder technique, which he concluded on the floor for ippon and an eleventh medal at a Grand Prix. 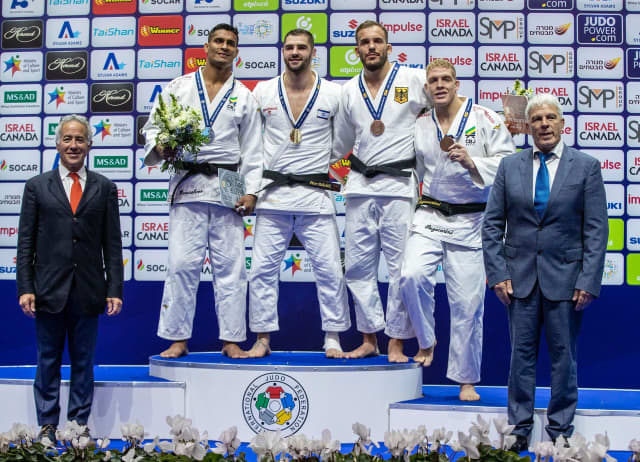 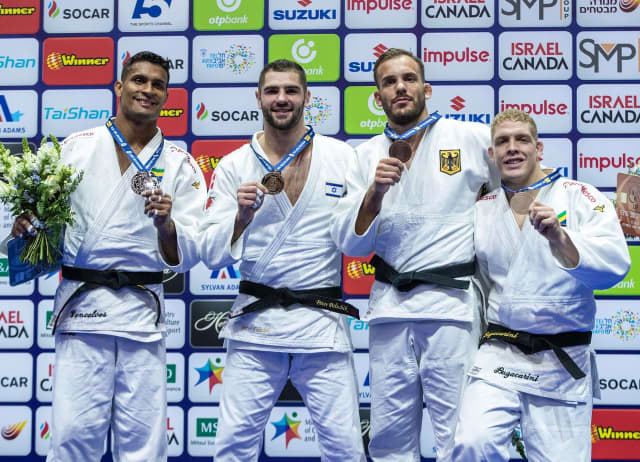 +100kg: Or Concludes an Amazing day for Judo and for Israel

What better final could the enthusiastic Tel Aviv public hope for than the one that pitted the holder of 20 medals on the World Judo Tour, KIM Sungmin (KOR) and the Rio 2016 Olympic bronze medalist, Or SASSON (Israel)? After the warm-up of the PALTCHIK final, once again the Israeli public could make their voices heard and show their passion for judo. After only 25 seconds and a first drop-seoi-nage by Or SASSON, KIM relaxed too much and had a waza-ari scored against him on the edge of the tatami. A perfect tactician, SASSON controlled the Korean to win the second gold medal of the day for Israel, while Peter PALTCHIK, already installed in the stands, encouraged his team-mate vehemently. With this second gold medal, Or Sasson, concluded this Grand Prix, one which will go down in history as a great success. 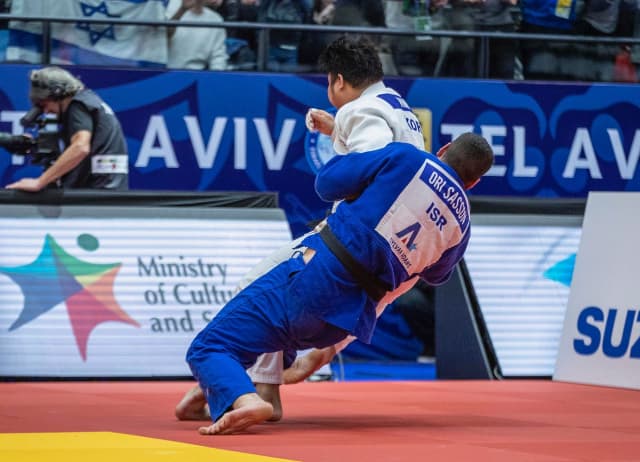 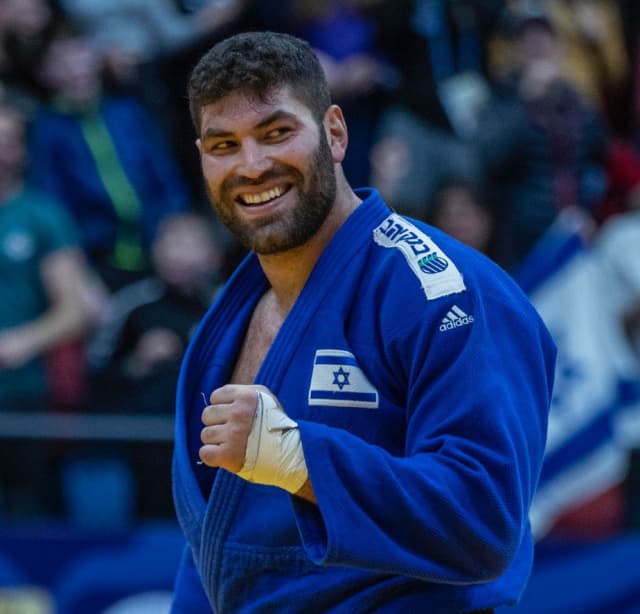 For the second bronze medal contest, KUMASHIRO Yusuke (JPN), gold medalist at the Qingdao Grand Prix in 2012 (-100kg) was up against the silver medalist of the Tashkent Grand Prix, Bekmurod OLTIBOEV (UZB). In less than thirty seconds OLTIBOEV took the lead with a left-handed eri-seoi-nage for waza-ari, but KUMASHIRO also scored, so both athletes had to summon extra grit, to enter the golden score period. After little more than 30 seconds, the Japanese competitor scored with a right handed o-soto-gari, that didn't offer any chances to OLTIBOEV. 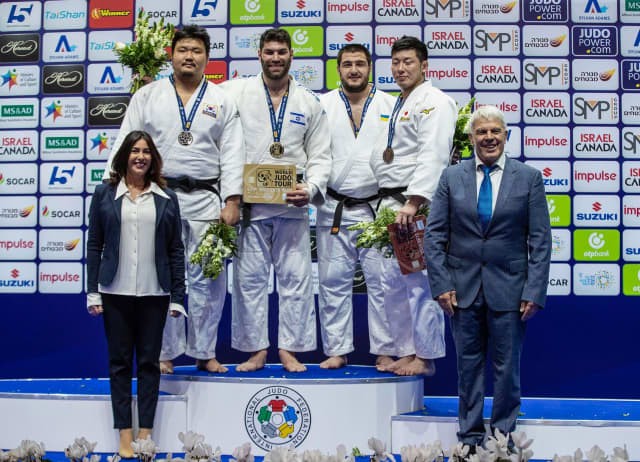 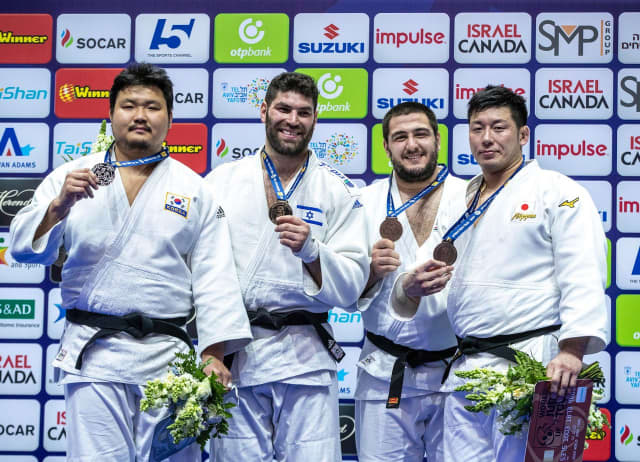