THE DYE IS CAST

By Nicolas Messner on 10. Nov 2017
Share
During the next two days, all judo lovers’ eyes will be looking at the city of Marrakech where the Open World Championships 2017 is taking place in the ‘Palais des Congrès’. Staging this event for the first time in history, Morocco is ready to welcome the 40 men and 18 women, who will participate on Saturday 11 and Sunday 12 of November.

To trace the history and lineage of the Openweight title means tracing judo back to its arrival on the Olympic stage and to look back through the careers of the pillars of the sport. It all really begins with one of the most famous Olympic stories of all time. Judo's appearance at Tokyo 1964 hypnotised the world when the late 10th Dan and legendary Dutchman Anton Geesink beat domestic opposition in their backyard to become the first non-Japanese Olympic judo champion. There is no weight category in judo which is more steeped in history, tradition and icons of the Gentle Way than the Openweight category.

During the official draw, Mr. Marius Vizer, IJF President, declared: "It is my great pleasure and honour to welcome you all here in Marrakech on the occasion of our Open World Championships. I want to thank HM. King Mohammed VI of Morocco and the Moroccan authorities who have made this event possible. I want to thank all those involved in the organisation of the world championships and I want also to underline the great efforts of Teddy Riner, who was personally involved.

"For all those who love our sport, this competition is very important. The level of the competitors coming from all over the world shows the global dimension of this championship. It is a special competition, in a different environment to the one we are all used to go to, but I am convinced that it will be a great success.

"I want to congratulate Mr. Chafik El Kettani and his team for his commitment and especially for the hard work to make sure that all delegations, including the Israeli team, could be welcomed in the best and same conditions.

"I wish you all the best luck during the next two days." 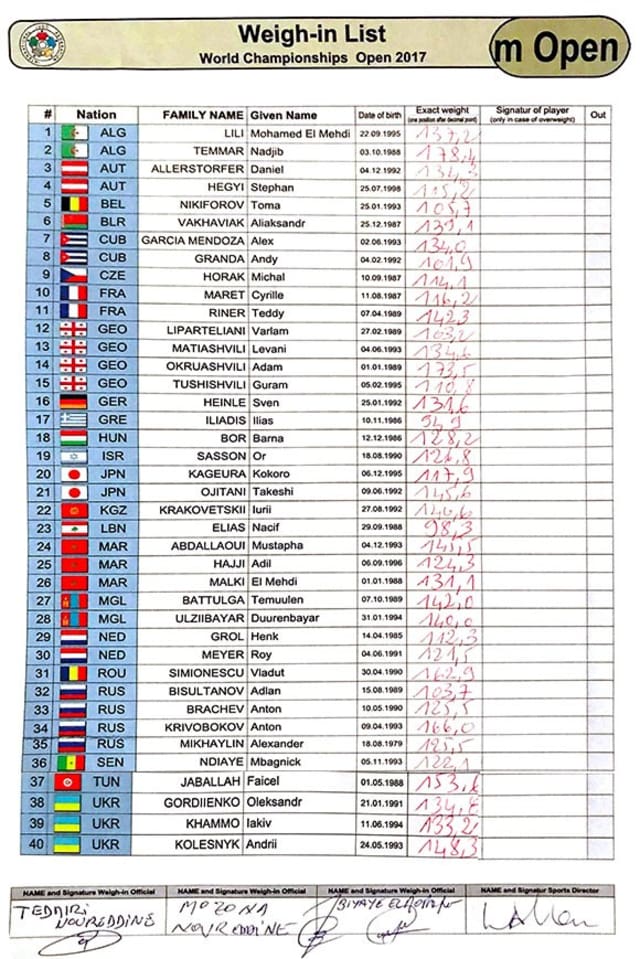 Mr. Chafik El Kettani, President of the Royal Moroccan Judo Federation said: "I am very happy to see you all here today on the occasion of the draw. We all worked very hard to welcome you in this beautiful and ancient city of Marrakech. Morocco is known for its amazing hospitality based on friendship, mutual understanding and peace.

"We hope that you are going to enjoy your stay in our country. I want to thank the IJF President, his team, and all the judoka who are present. I want to congratulate my team for the great work and we are looking forward to the next two days of amazing judo.

"Last but not least, I want to thank our champions, Assmaa Niang (MAR) and Ilias Iliadis (GRE), who are with us today in the occasion of the draw. Assmaa is a role model for many young judoka and especially for the girls and for here it is a great challenge to be here as she usually compete in the -70kg. Thank you to her. I wish you good luck and the best." 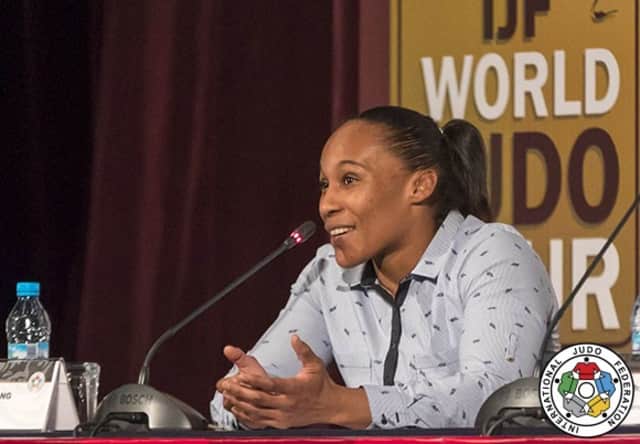 After the technical aspects of the draw, and during the press conference, Assmaa Niang, who was invited to join the IJF President on the stage, declared: "This an amazing moment for me to be here and to be part of that judo family. You know, when I learned that the Open World Championship was taking place in my country and in Marrakech, I said that there was no way that I couldn't participate. It is a challenge for me but I love challenges and I am not afraid of them. I also know that through my participation, I can inspire the young generations and particularly the young girls.

"Judo is developing rapidly in Morocco and in Africa. We have a huge potential and we need such an event. This competition will help us to develop even more. I thank the IJF and the Moroccan Federation for giving me the opportunity to be here."

Ilias Iliadis, triple World Champion and Athens 2004 Olympic Champion, who is coming back to competition on this special occasion said: "Who I will compete with at the first round is not important. I am here to do judo, to enjoy and to give the best of me. When people ask me if I am ready, I answer that I was born ready. So no matter who I will meet in the first round, I will be here and I will be strong. 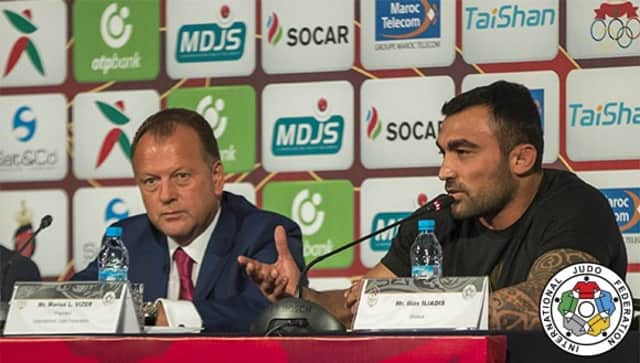 "I agree with Assmaa, we have a role to play in the society. I came back here for the challenge of course, but mainly because I want to inspire the new generation. I want to tell them that they can be successful. I want to show them that everything is possible. You need to work hard for that, but this will change their lives."

The dye is cast. After the official draw, the next step will be tomorrow with the men's competition. The preliminary rounds will start at 11:00am in the Palais des Congrs, the final block starting at 5:00pm. On Sunday the women will start their competition at 2:00pm, with the final block on the last day also scheduled for 5:00pm. 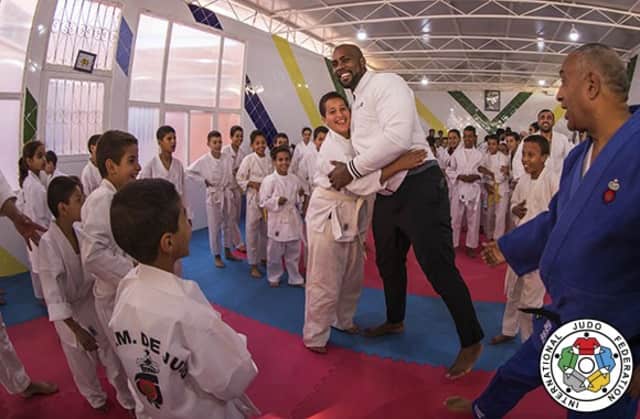 This educational programme is part of a larger project that has been developed by the Royal Moroccan Judo Federation for several years, as explained Mr. Chafik El Kettani, the national federation president: "We started those activities with orphans in 2013 in Casablanca. We have now 12 programmes running throughout the country (3 in Casablanca, 2 in Rabat, 2 in Agadir, 1 in Meknes, 1 in Oujda, I in Tangier and 1 in Marrakech).

"All together more than 1,200 children are concerned. It's an official partnership that we have signed with the authorities in charge of the orphanage institutions of Morocco. The federation offers the insurance, the judo outfits, the judo teachers and equipments. 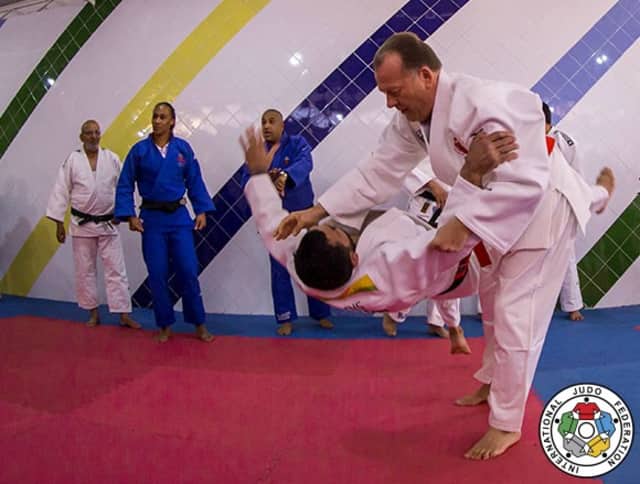 "Through that educational and social programme we want to widen the base of judoka and we want to offer a better future to those children who have a difficult life. We really believe in our social role. Often the children have no access to sporting activities and through judo we can a real and positive impact on them.

"In the oldest institution where we launched judo, some children are already reaching the podiums of our national competitions. Maybe one day, our next generation of champions will come from there. 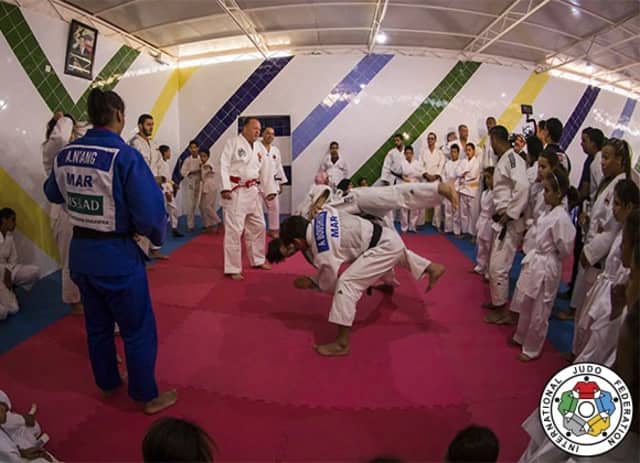 "Our goals is to be able to start judo in all the orphanages of the country, which represents more than 100 institutions."

After a warm welcome this morning, the IJF and Moroccan delegation was invited to join the children on the mat. Mr. Vizer led the warm up with Ilias Iliadis, while Teddy Riner and Assmaa Niang were interacting with the youngest judoka. Then the IJF President led a technical judo session and some small randoris were organised. 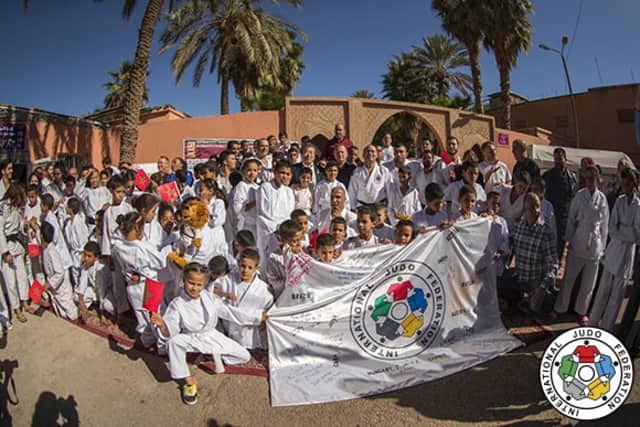 After the judo session, all the participants joined outside of the dojo and presents prepared by the IJF and the Moroccan Judo Federation were offered to all the children, in a very friendly and positive atmosphere. For more than one hour, officials, champions and moreover all the children had a lot of fun and could enjoy the session, get more and more used with the moral code of our sport, and enjoy the rest of the day with their eyes full of emotion and hope.

Assmaa Niang said: "This is so important to be able to give back hope and joy to the youngest ones, especially when they have been going through difficult moments. It is our duty and I was really proud this morning to be present among important personalities such as the IJF President or Mr. Uemura, the Kodokan President, to deliver a message of friendship and hope." 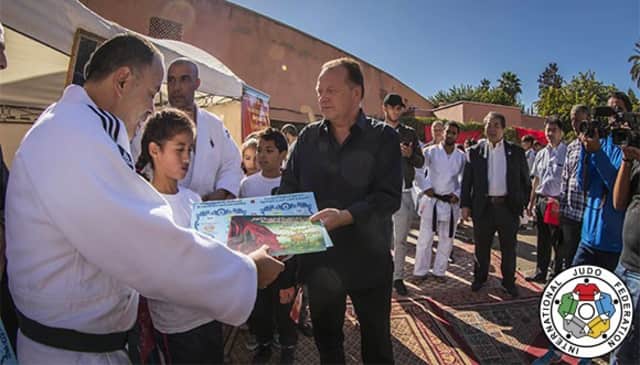 In the evening another special judo activity was held on the Djemaa El Fna square in the heart of Marrakech city centre. Children of the orphanage also joined the activity and they will again be present during the next two days to watch the judo competition (more images of the judo animation will be published tomorrow). 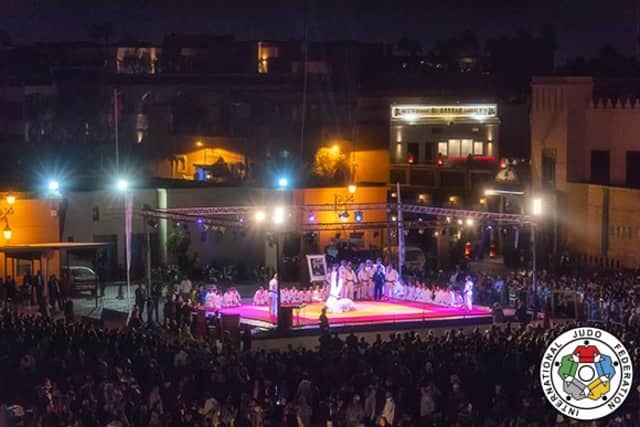