The Role of Photography in Judo Education

Written by Jo Crowley on 03. Nov 2022
Photographs by Gabriela Sabau, Tamara Kulumbegashvili
Share
The Azerbaijan Judo Federation, in collaboration with the IJF, have included in their Baku Grand Slam programme an opportunity for sport photographers to come together for a seminar with the IJF in-house team.

This is the second time IJF photographers Gabriela Sabau and Tamar Kulumbegashvili have opened their photo albums for the purposes of education, having led the first event of this kind in Tiblisi in June of this year.

Ulkar Abbasova, Press Secretary of the local federation, has co-ordinated the local organisation to provide a space for the presentation and then move on to a practical session where the participants could get hands-on practical experience with advice and feedback from Gabriela and Tamar. 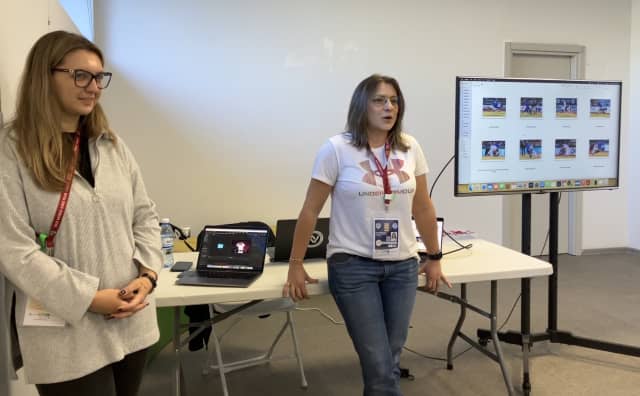 Tamar and Gabriela welcomed guests to the seminar

Gabriela Sabau opened the seminar, “We are here together to have an open discussion about sport photography and specifically about how to photograph judo. We will show you how we work on the field of play and beyond.”

Gabriela spoke about the different parts of the role, not limited to photographing just the competition itself. She highlighted that the broader context includes protocol, special events around the tournament such as seminars, signings, pre and post-contest emotions and much more.

The next part of the discussion covered some technical details that must be considered when arriving to set up in a venue. She talked about positioning matside, lighting and timing. There were some specific questions about lenses, apertures, diffusion and perspective that initiated some high level conversation. 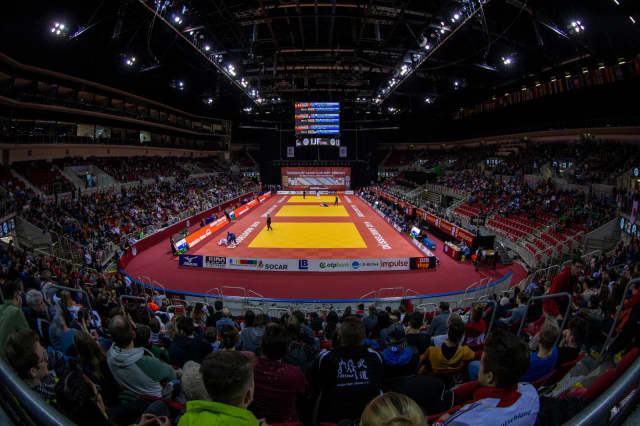 The arena for the 2019 Düsseldorf Grand Slam

Gabriela and Tamar showed the group a photo of a field of play from a previous event and pointed out where the local photographers stay, on the official tribune side of the mats, facing the spectators, the scoreboard and of course the athletes and referees. It’s a great view but also a position that leaves the other side of the arena free for athletes and coaches to do their best work. They are the centre of it all and must remain so.

“For me the best fight is with action, emotions of the winner and then the emotion between athletes and coaches. We shoot a lot of portraits, not just sport photography, to make sure our records are full and rich, not limited to one aspect of sport.” 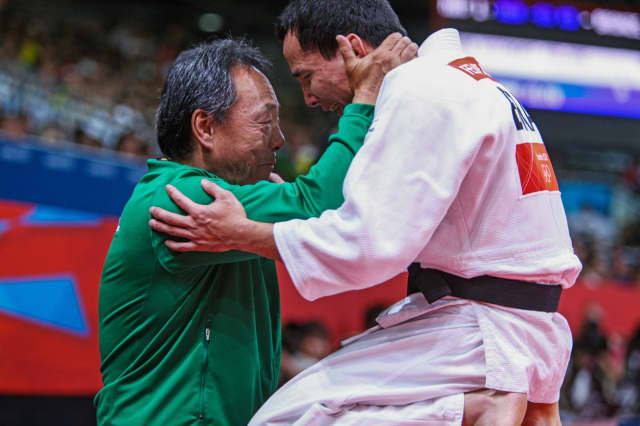 The most intense, visible emotions: bronze for Kitadai (BRA), London 2012

By including all the extra faces of sport competition, there is a layered impact of each great photo. Those seeing them can immediately feel the intensity of the moment and in many cases there will be a link between the moment and the person viewing, maybe it’s an historical meeting between members of the judo family or an existing rivalry or knowledge of the background or future selections and consequences. All of the knowledge and previous interaction with judo feeds into the way photos are received and perceived.

Those gathered asked some interesting questions and also offered their own observations. One photographer highlighted the difference between pre-Covid photos and those taken during the pandemic, saying that he liked the formality and distance during the Covid period.

Gabriela responded, “I like how the Japanese are fighting and also how they bow. To show respect in photography, the Japanese are the best to focus on but often the emotional reactions are reserved and so they bring a totally different kind of emotion. We saw more photos like this when we first came back to competition after the enforced Covid break.

Recently there has been more obvious emotion from the Japanese, such as Takato’s outstanding win at the Tashkent World Championships after he won the final and his 4th world gold. I most enjoy taking photos that include that emotion." 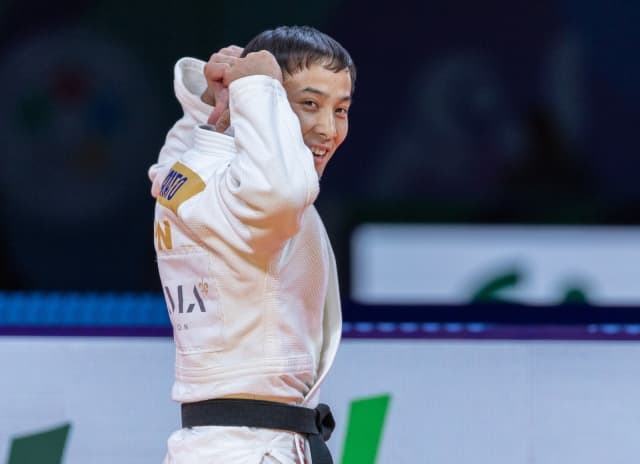 "The Paris and Tokyo grand slams are always wonderful for our work. The venues, lighting and organisation allow us to really frame the athletes in the best possible way. It could be surprising how much the organisation can impact our work but it really does. Having easy internet access and fully engaged local teams, fluid transport and expertly designed lighting rigs means we can simply focus on our work.”

In 2020 Gabriela won the special merit award at the World Sport Photography Awards. It was the first time judo made it to the group of winning photographers. 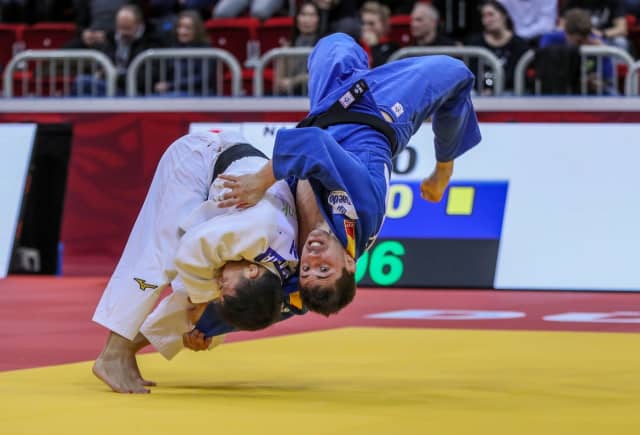 This photo is not just about the agility and excellence of the winning judoka but we see how judoka defy physics almost levitating above the tatami. In this photo the athlete being thrown makes eye contact with the photographers and his expression really makes the photo special.

Away from the classroom, moving on to the official warm-up area of the arena, a practical session was held with young athletes from the Azerbaijan national team, including Nagiyev who recently won a bronze medal at the European Cadet Championships in Porec. The athletes demonstrated throws and randori for the participants to practice their skills and benefit from on-the-spot-feedback from Tamar and Gabriela. 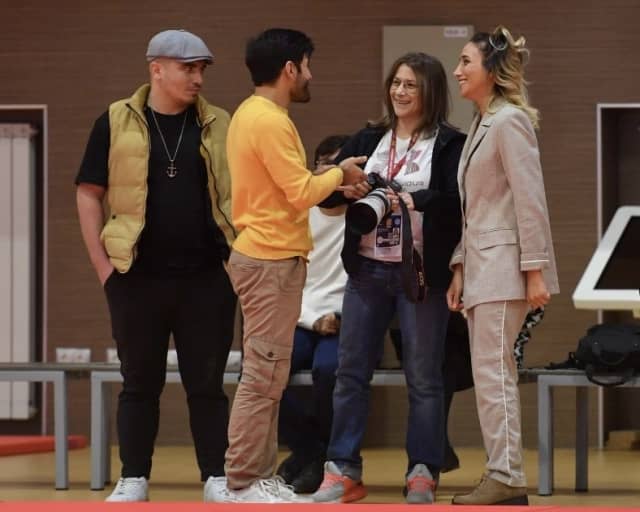 The assembled photographers will be present throughout the Baku Grand Slam and will receive feedback on their photographs from the IJF team. This collaboration is really unique and offers the local media team a very special insight and education. 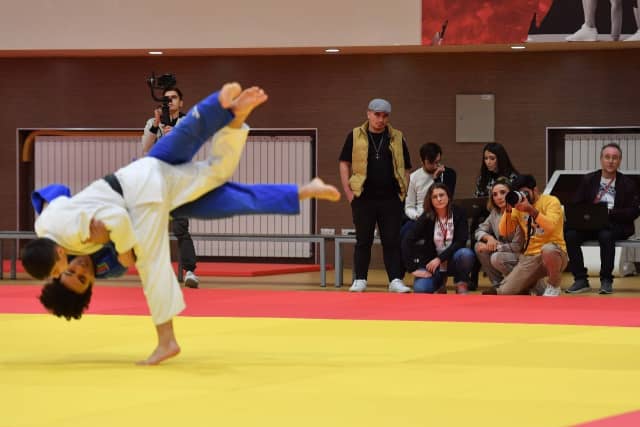 Tamar concluded by saying, “Education is important for everyone so that we are always striving to be better. It’s important for us and for them, as we are learning too even while delivering these seminars.”

Beginning with the lightweights on 4th November at the Heydar Aliyev Sport Arena in Baku, this grand slam will bring 3 days of elite judo competition to a bustling city and to the wider judo family. Keep up with all the action at live.IJF.org.