The success of Slovenian Athletes - Interview with two Olympic Champions 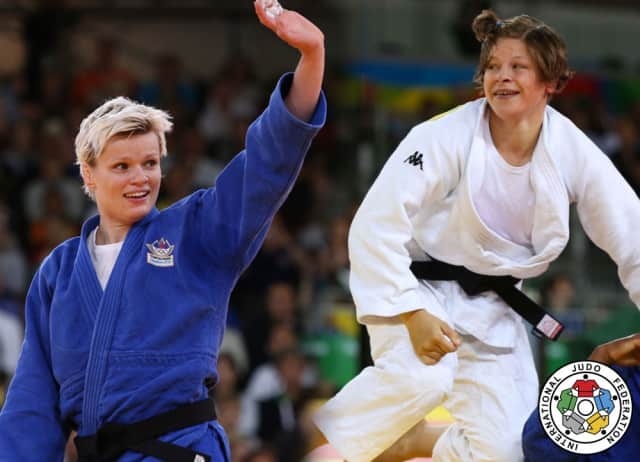 Tina, a few weeks passed since your Olympic title in Rio, how do you feel today? What does that amazing achievement change in your life?
That’s right, a considerable amount of time has passed since the competition. I had to work very hard and sacrifice many things. All of my free time was committed to just one goal: the Olympic Games. I still haven’t started my training and I cannot find a way to get started for now, but I will definitely consult my coach.

Urska, for you it’s been already four years that you became Olympic champion, could you tell us what has changed in your life as well?
Firstly, a lot less training. I started to train only for my soul and there was no need for me, to be on the edge of my capacity. I focused on younger generations and until olympic games in Rio I was also dedicated to men’s team. Now I am focusing on my own judo camp for children. I would like to teach them, but the sporting spirit as well, not only judo, and valuable moral skills for life that our parents and grand parens have taught us and which are unfortunately rare nowadays.

Tina, what do you think made you stronger during the Rio Games? How did you deal with the pressure of being the current world champion, thus one of the favorites?
Actually I didn’t really pay attention to the fact that I was the current World Champion because after the world championship, my mind was on Rio only. I have fulfilled my goal and I have become even stronger.

Urska, did you do a specific work with Tina to prepare her for the Games? Tell us a bit more about the preparation and especially the last two years leading to Rio?
Tina was my sparing partner during the olympic games in London. I think she learned a lot, not only from me, but also from Fabian, her coach, and from his working system. Over the last two years, before Rio, she was working only with him. I concentrated all my energy onto the men’s team. 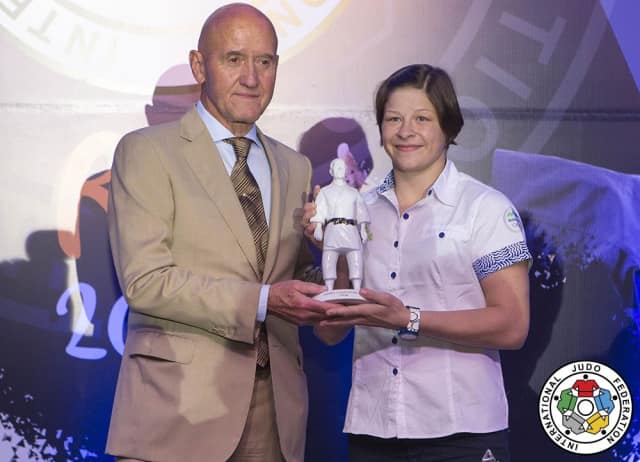 Tina, how does it feel to follow Urska's steps? It is amazing that four years after her, you become the new Olympic champion, in the same weight category? What is the secret?
The secret is that I have repeated Urška’s success. I learned a lot from her and her performance in London. As she told you, I was her sparring partner in London but still our techniques and fighting styles were completely different.

Four years ago you were on the top of podium in London. In Rio, it is Tina who topped the medal podium? How did you feel when you saw that Tina was your successor?
When Tina stepped on the podium, I remembered all the feelings of the ceremony in London. It is really a fantastic feeling when you are able to experience something like that and I was really proud on Tina. This is what every professional athlete wishes and works for. And I am grateful that I was able to experience this from a different point of view as well - as a closer viewer and not only as the competitor. 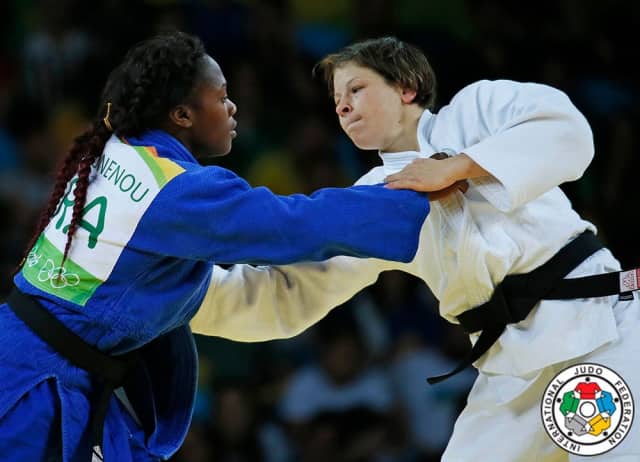 Tina, When did you start judo and why? Tell us about your personal history within the sport?
I started doing judo by coincidence. When we used to drive by the Z’Dežele Sankaku judo club to visit our grandparents, I kept asking my parents what was going on in there and why there were always so many cars. They told me that they was judo in there and I wanted to give it a go, so they took me to the club and I have been training there ever since. I began training in 1998 and my first judo teacher was Urška Žolnir.

Urška could you tell us your personal story?
I started with judo when I was 10 years old and my first “judo outfit” were a pair of jeans and a white t-shirt, but it gave me a special energy to step on the tatami for the very first time. I was a very energetic child, who wanted to try everything in life. At the time I started with judo, I was also practicing piano and had a lot of extra sporting activities in school. Of course it was not always easy until my Olympic title in London. I had a lot of injuries and because of that my career was in danger in 2009. I was training without anterior cruciate ligament in the left knee for 12 years and when in 2009 ligament also broke in the right knee, the surgery was unavoidable. It was very hard, but as I always say “what doesn’t kill you, makes you stronger” and it made me stronger indeed! Three months after the surgery I was back on track and getting ready, training in Budapest. After 5 months I had my first competition in Italy, in two categories (Laughs). You can ask Elizabetta Fratini from the IJF IT department. After 6 months, I competed during the Tunis Grans Prix and I won a bronze medal. It was good because I needed points for the Olympic qualification. Nothing would have been possible without my coach, Marjan Fabian, and all his support. 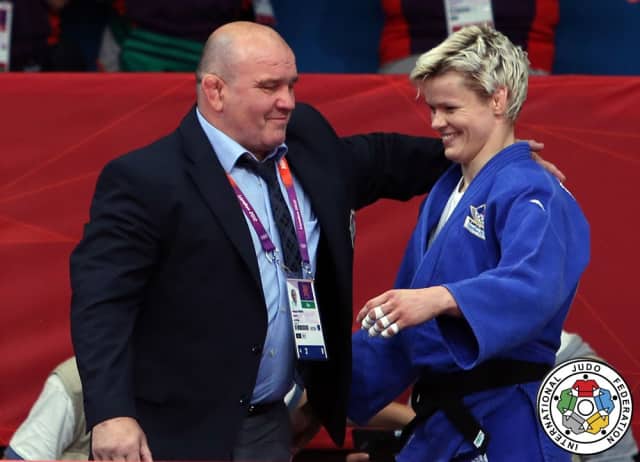 Tina, tell us a bit more about you. Who are you? Where are you coming from? What are you passionate about? What do you want to do after your sporting career? What are you dreams? What gives you emotions?
I am one of the Olympic medal holders in my city. I live in Celje, a city with a population of about 40,000 inhabitants. I live in a flat in a small urban settlement. In my free time, I often visit my grandmother and other relatives because my family means a lot to me. I am very closely connected to nature because it gives me strength and energy. I always believe in myself. After a morning workout, I like to rest when I’m at home and I always prepare lunch for my parents because I love to cook. Other than that, I’m just an average girl.

Urska, you seem always to be so calm and under control. Tell us who is the ‘real' Urska. What makes you react? What are your passions outside of the judo world? And tell us a bit more about your country, Slovenia. How are the people there. For someone who never came to your country, tell us why he/she should come.
I am a very calm person, who wants to have everything under control, but all my closest friends and family know that I am always smiling and enjoying the company of positive people. Slovenia is about 20.000 km2 and is offering Alpine mountains, gorgeous lakes, sea, forests, great local food, rich culture and very nice and friendly people (smile).

There is definitely a Slovenian school of judo, in other words, a Slovenian tradition in judo. Could you tell us what do you think about that? Why a so called ‘small country’ has so good results?
In my club, we often ask ourselves how such a small country can be so successful. In my opinion, there is only one answer to that: one person is behind it, Marjan Fabjan, also known as Fabi.

What is you opinion, Urska, on that Slovenian Success?
Hmm, what can I say? Tina is right, this is Fabian’s working system and how he brought judo in Slovenia at that level, where it is today. He has his own unique system and sometimes it is as hard for him as for the athletes, but we all know that with mediocrity we cannot become great competitors in this world. We have to be different, unique and crazier than others....you know us (laughs). 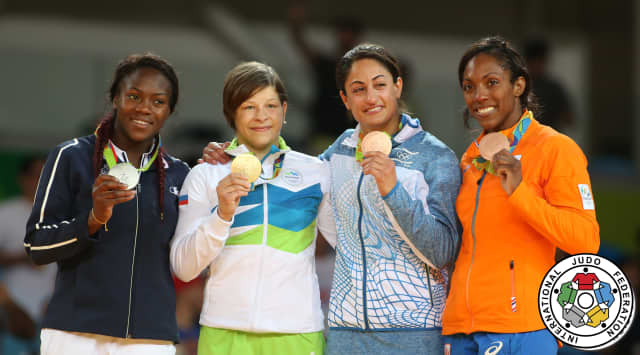 Why is judo different from any other sport or activity? What are the core values of judo? Would you recommend to everyone to practice the sport?
For me, judo is the number one sport. Judo is a sport, but it can also be used in self-defense. It is a way of life because no other sport shows such respect towards the opponent as judo. I recommend it for everyone, young and old, for self-defense, for recreation or as a professional sport.

Urska what would you say about what makes judo different?
In judo we are not only learning judo techniques, but also how to live. To become the best, it is not enough to know how to fight, but you simply have to live judo. I think that most of the judokas are very calm persons. If they were not before, they definitely become calmer, because through judo, they can learn self control. If you are able to step forward, you can see that we can do everything, and this is my life’s moto - I can do everything, nothing is impossible! 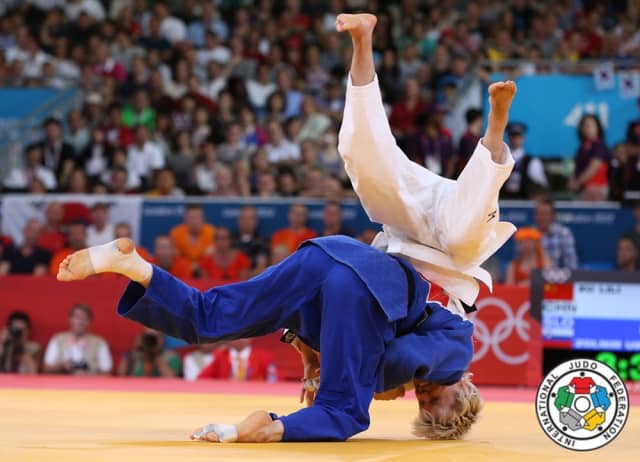 Outside of judo, do you have other challenges that you want to achieve? And how judo could help you?
After judo, I also want to finish school and educate myself. I am thinking about entering a coaching career or any other function in judo. So far, all my life has revolved around this sport and I don’t see why I should change something I love.

Urska, as you have already accomplished your athlete’s career, what are your challenges today?
Of course I still have big wishes and goals in life, but for now I would like to keep them for myself. (smile).

The present is two Olympic titles within four years for the same country, in the same weight division. Once again congratulations to both of you. What is the future? For you Tina? You mentioned right after the Games that you had a lot of ambitions? What are they?
As far as my ambitions are concerned, I cannot give a straight answer yet. I need to think about it and will definitely have an answer before the New Year.

For you Urska. You succeeded as an athlete, You are already successful as a coach. What will be next?
Now it is the time for younger ones. We are working  hard with them and hoping for more european, world and olympic champions one day in the future.

Both of you are role models. Only a few people can become Olympic Champion. Based on your experience, what would be the message that you want to deliver to the young generation, to the ones who are dreaming of the Olympic Games but also the ones who might have no special goal?
My advice is to listen to your coaches, believe in yourself and do not believe everything you read on the internet and other social media.
And you Urska?
Nothing is impossible! Barriers are only in our heads. Work hard and then enjoy the results of your previous input.
More news about Tina Trstenjak: https://www.ijf.org/news/show/slovenias-olympic-champion-trstenjak-gets-stamp-of-approval
Tags ZOLNIR Urska TRSTENJAK Tina Slovenia Olympic Games Champion More than a sport rio2016 Olympic Games London 2012
See also
Interview
Tina Trstenjak: Where There is Effort...