You wanted the Show, you got it!

Written by Nicolas Messner on 24. Jan 2020
Share
If the first day of competition had been dominated by Japan and Korea with two gold medals each, this second day was marked by the domination of European countries (Gold medal for Great Britain, Italy and Russia) while the Australian anthem also resounded in the stadium with the magnificent victory of Katharina HAECKER in -63kg. 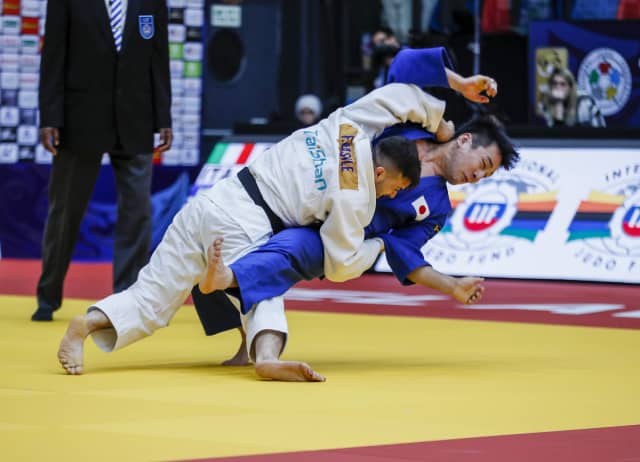 What we will also remember from the final block of the day is that it was beautiful, even amazing, folded in less than an hour and a half of breathtaking spectacle, whether in regulatory time or in the golden score. The engagement was total, the tactics simplism: to win, in the most beautiful way possible. In tachi-waza (standing judo) or on the ground (ne-waza), the judo presented throughout the day was not only spectacular, but frighteningly effective. This is a good sign for the third day of competition but also for the events to come. 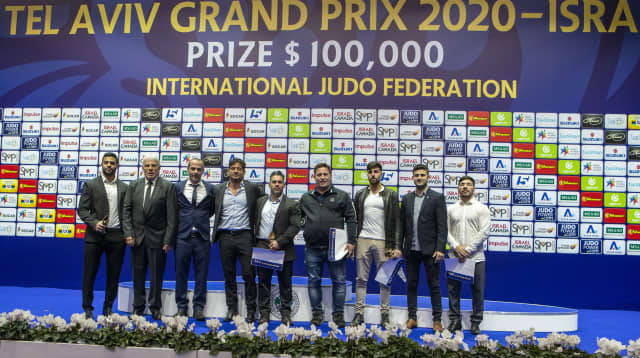 Today, the large crowd appreciated what they saw, enjoyed the contagious good humor of the Olympic Champion Fabio Basile, who is back on top form, and applauded the appearances of their hero, the World Champion Sagi Muki, who although he was slightly injured and consequently did not participate in the competition, was there to appreciate the show. Just before the start of the final block, Sagi Muki was honored alongside other renowned Israeli athletes and coaches by his federation, in front of an audience in heaven.

While the number one seed, Martyna TRAJDOS (GER), did not reach the final, defeated by the Australian, Katharina HAECKER, the first final of the day saw the latter and Catherine BEAUCHEMIN-PINARD (CAN), already 10 times on a podium of a World Judo Tour event, to oppose for the gain of the gold medal. It took less than a minute for Katharina HAECKER to leave Tel Aviv covered in gold. Immediately in action from the first hajime, she took control of the final by scoring a first waza-ari on o-soto-otoshi immediately followed by an immobilization for ippon. It is the first gold medal in Grand Prix for the Australian. 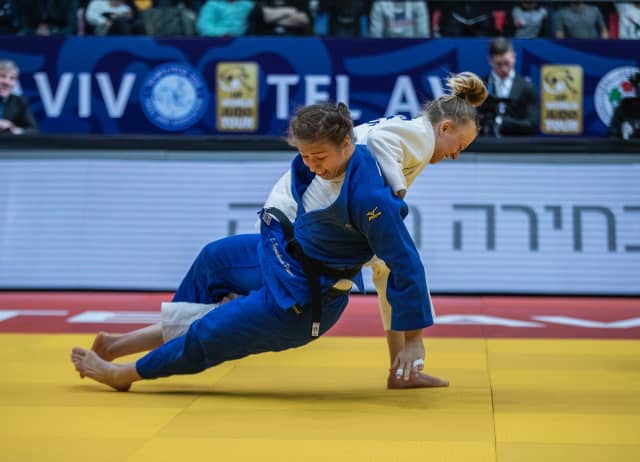 The first bronze medal contest of the category saw Renata ZACHOVA (CZE) and Alexia CASTILHOS (BRA) facing for a place on the podium. Alexia CASTILHOS quickly took the lead with a first waza-ari. ZACHOVA had to take all the risks, while CASTILHOS was just waiting for the counterattack. And the Czech's strategy paid off as she scored a beautiful ippon with a powerful sode-tsuri-komi-goshi. 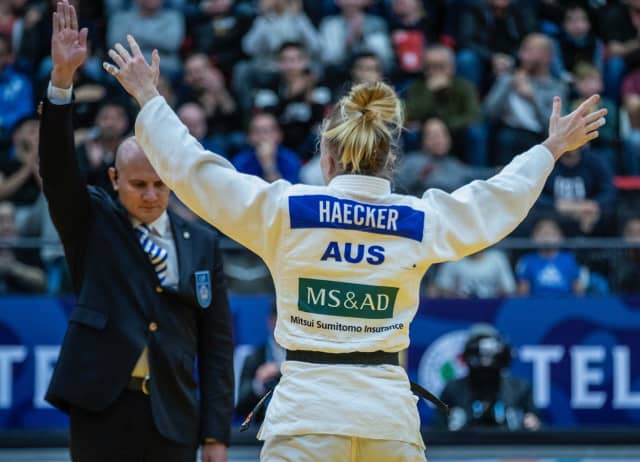 In the second bronze medal contest, Anriquelis BARRIOS (VEN) was opposed to Martyna TRAJDOS (GER). Disappointed after her loss in the semifinals, TRAJDOS started the match at a high pace, but very concentrated, BARRIOS avoided the first attacks of the German. From that moment, the contest seemed to balance out, until TRAJDOS finally found a first opening on a front-back action-reaction, for a Waza-ari. She completed the scoreboard a few seconds later with a ko-uchi-gari for a second Waza-ari, to win the bronze medal. 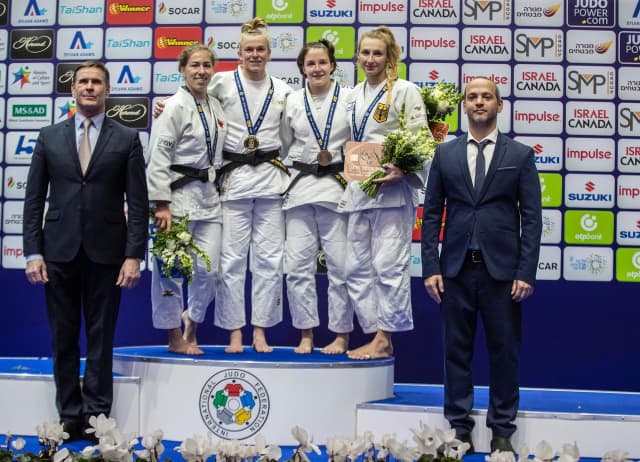 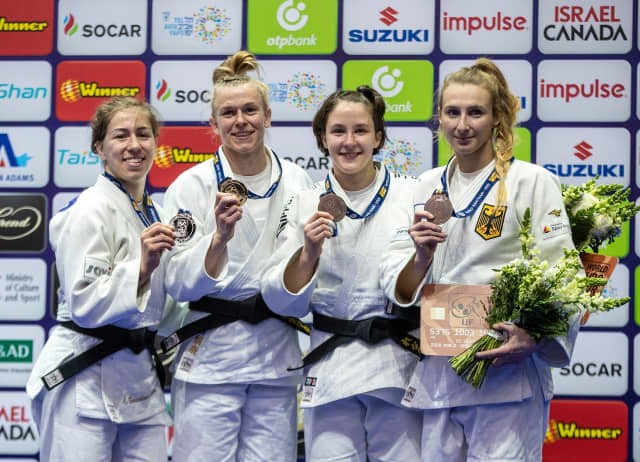 -70kg: CONWAY starts the season on top of the Podium

KIM Seongyeon (KOR) and the Olympic medallist Sally CONWAY (GBR) made their way to the final of the women's -70kg. From the start, CONWAY set a steady pace to take over from KIM, which she did perfectly by scoring ippon on a first ko-uchi-gari that she followed to tackle the Korean on her back. 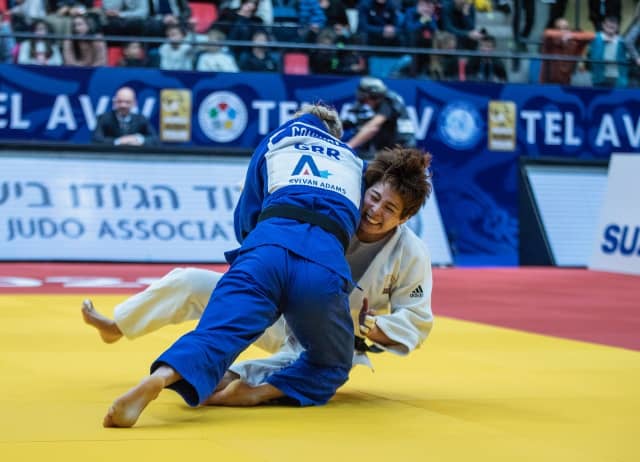 The first bronze medal match saw Gulnoza MATNIYAZOVA (UZB) facing the current Cadets World Champion, Ai TSUNODA ROUSTANT (ESP). Obviously stronger than her opponent, it took almost 3 minutes to TSUNODA ROUSTANT to score a first waza-ari with a powerful te-waza technique. A Waza-ari that she could keep until the final gong to win a very first World Judo Tour medal. It might be only the beginning of a promising career. 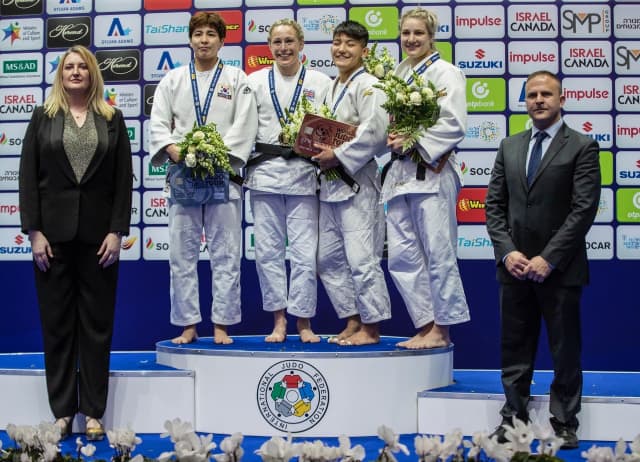 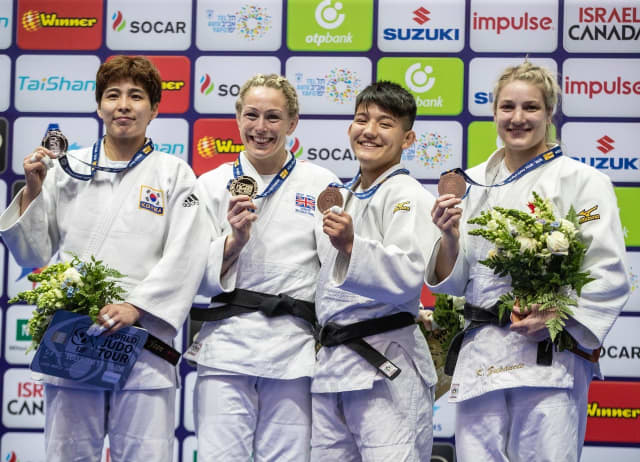 The first male final of the day was a final between regulars of major events since it opposed the 2018 European Champion, Ferdinand KARAPETIAN (ARM), and the Olympic champion Fabio BASILE (ITA). With a serious run in the preliminary rounds, the Italian returns to his top level at the best time while the final stretch before the Tokyo Games is now wide open for all athletes. Due to an injury Ferdinand KARAPETIAN couldn't compete and Fabio BASILE won the title and received a standing ovation while leaving the tatami with a big smile on his face. This is the magic of being an Olympic Champion and being Fabio BASILE. 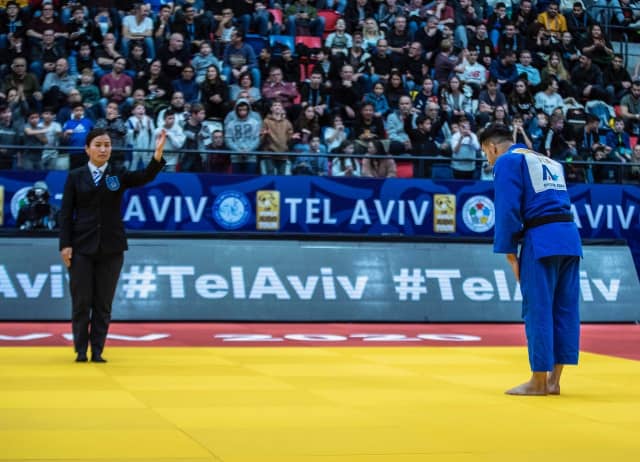 The first bronze medal was disputed between the other Italian of the category, Giovanni ESPOSITO, Cadet World Champion in 2015, and the Slovenian Martin HOJAK, world junior medalist in 2015. In less than 10 seconds HOJAK scored a first waza-ari, followed by a perfectly executed ground work concluded with a shime-waza for ippon. 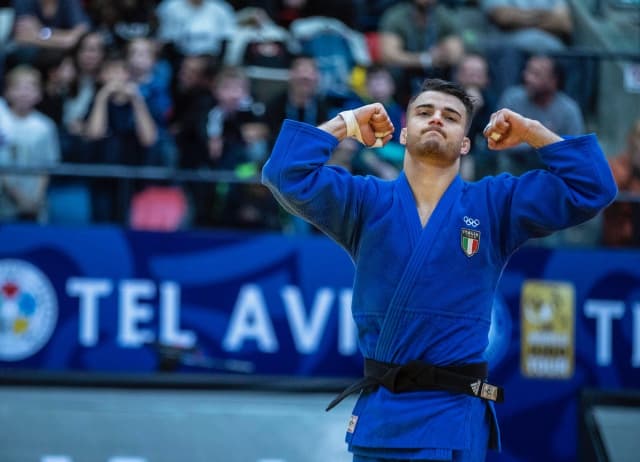 In the second bronze medal match, Nils STUMP (SUI), bronze medalist in 2018 in Tbilisi, was opposed to Salvador CASES ROCA (ESP) who, whatever would happen as he stepped on the tatami, was guaranteed to achieve his best result on the World Judo Tour. STUMP needed a little less than 2 minutes to execute a perfect uchi-mata for a clear ippon to win his second medal at a Grand Prix. 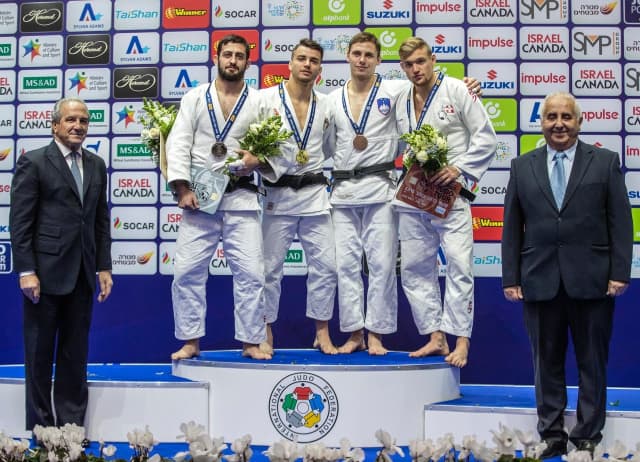 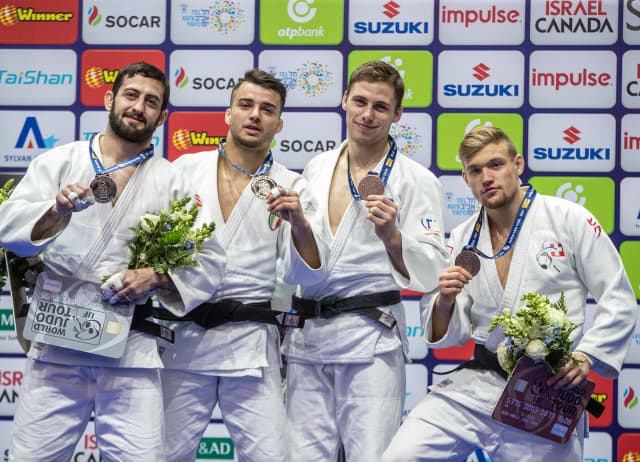 The last final of the day opposed the Russian Aslan LAPPINAGOV and the Greek Alexios NTANATSIDIS, in a fight of strong men. For 4 minutes, the attacks were launched from one side to the other, without rest, the two athletes closing the first part of the contest, without scoring, but also without receiving the slightest penalty. It took LAPPINAGOV 44 seconds to finally open the score and win the gold medal on a spectacular uchi-mata. We love matches of such intensity, even when they last longer than four minutes. 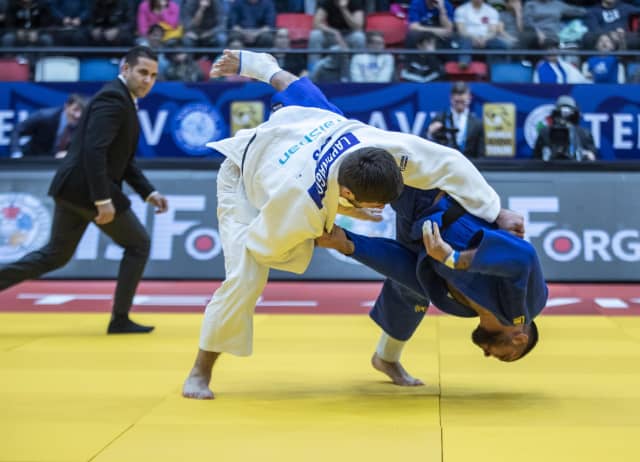 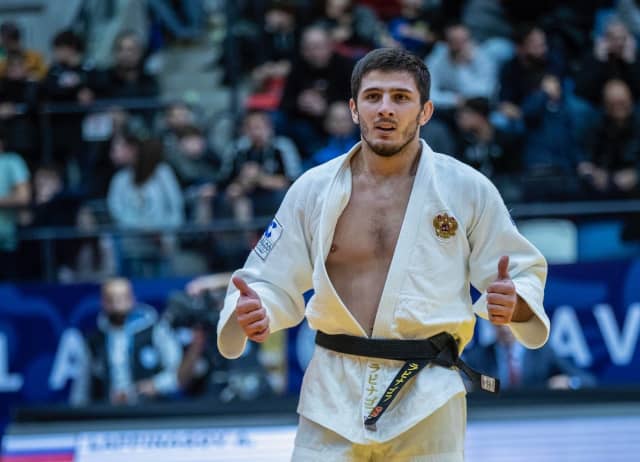 In the second bronze medal contest, the 2019 world bronze medallist Luka MAISURADZE (GEO) was facing the 2018 World bronze medallist, Vedat ALBAYRAK (TUR). The first strong action of the match was to put in the credit of ALBAYRAK who believed he had scored a Waza-ari on o-uchi-gari, but the mark was withdrawn, as MAISURADZE landed on the front of his body. For the first time in the final block, the gong resounded in the arena without either of the two athletes being able to decide who the winner was. It was not until 1:14 in the golden score, that MAISURADZE was finally able to fully engage his right handed o-soto-gari to win a second medal at a grand prix. 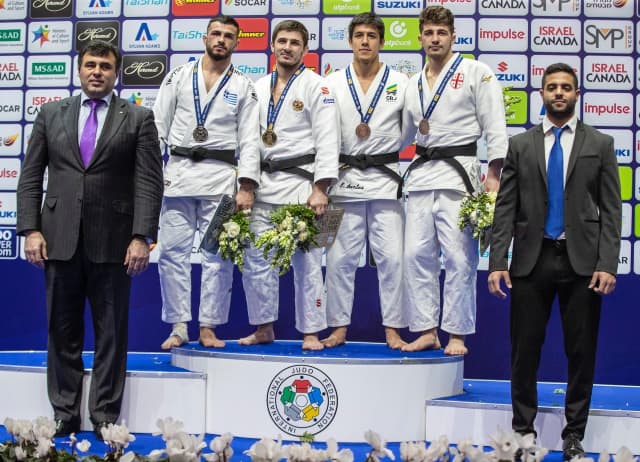 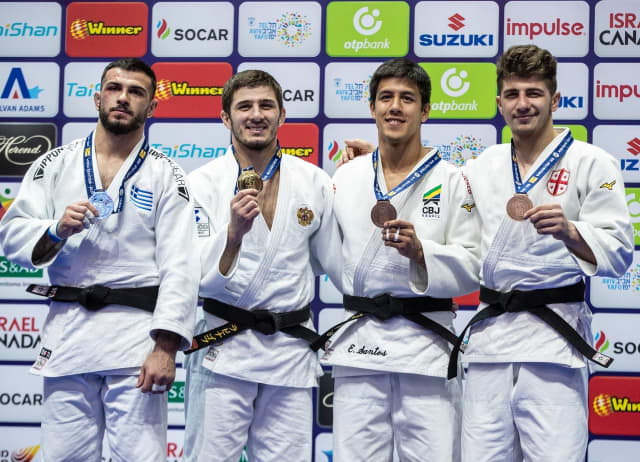