Written by Nicolas Messner on 09. Mar 2018
Share
Today five categories were in action in Morocco for the Agadir Grand Prix 2018 edition. Discover below all the results of each category and follow us on social media. Stay tuned to discover more about that first day of competition and to read our analysis of the day.

-48kg: DOLGOVA Secures First Gold for Russia
The first final of the day opposed the top seeded athlete and winner of the 2017 Abu Dhabi Grand Slam, Irina DOLGOVA (RUS), and Catarina COSTA (POR), whose best result so far was a third place at the 2018 Odivelas European Open. After several attacks that were not strong enough to score, COSTA was close to being penalised, but the first score came from the Russian corner when DOLGOVA executed a ko-uchi-gari for a waza-ari. Then Costa was penalised for a false attack. DOLGOVA simply had to control her opponent until the final gong to win her second Grand Prix gold medal. 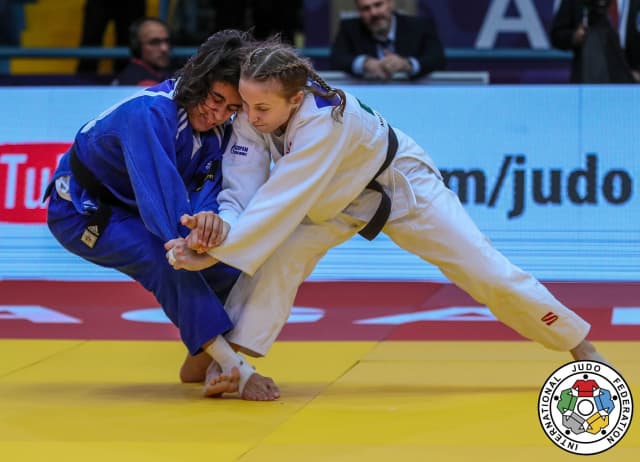 The first bronze medal contest saw Marusa STANGAR (SLO) and Katharina MENZ (GER) competing for a medal. If the match looked quite well balanced in the standing position, STANGAR was clearly stronger on the floor and several times put MENZ in a difficult situation but the German resisted. Just 38 seconds before the end, STANGAR was penalised with a first shido for passivity, but then the two athletes had to enter the golden score as nothing else was written on the scoreboard. More than five minutes later, the situation seemed exactly the same, well balanced in tachi-waza and advantage for STANGAR on ne-waza, and that is exactly how the Slovenian won as she scored ippon with an immobilisation.

In the second bronze medal contest, the silver medallist of the Antalya Grand Prix last year, Shira RISHONY (ISR) faced the two-time Grand Slam winner (Baku 2016, Tyumen 2015) Julia FIGUEROA (ESP). Both athletes entered the last minute with only FIGUEROA having one shido to her name, but after a long groundwork session, the Spaniard could take the control of the Israeli with an immobilisation for ippon and a fifth Grand Prix medal. 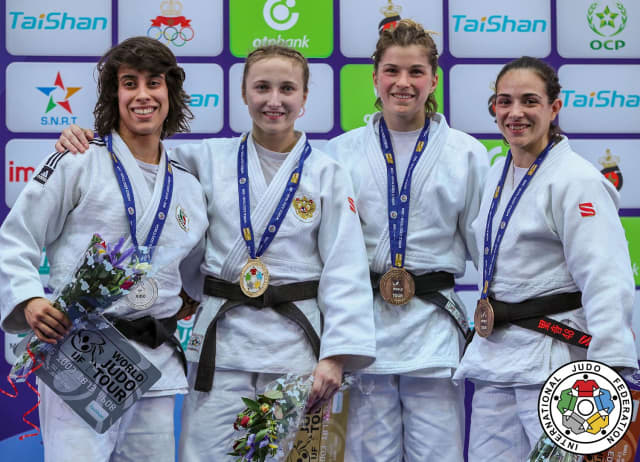 -52kg: TSCHOPP Concludes with Gold
With no surprise, the final of the women's -52kg weight division opposed the two best athletes of the category as the World Masters bronze medallist, Alexandra-Larisa FLORIAN (ROU) stepped onto the mat against the European Bronze Medallist Evelyne TSCHOPP (SUI). After 25 seconds, the winner was already known as TSCHOPP scored a first waza-ari, which she immediately followed on the floor with an immobilisation for ippon. 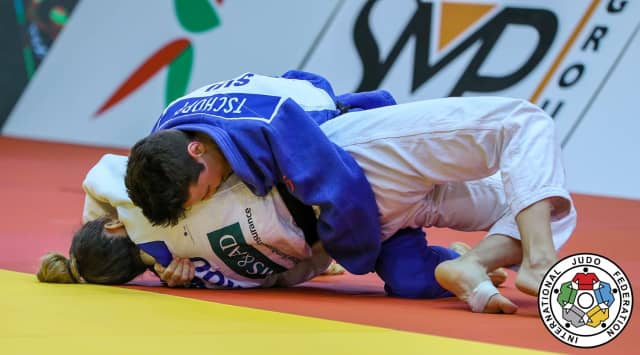 The first bronze medal contest opposed Gulbadam BABAMURATOVA (TKM), already winner of two Grand Prix in the past and the 2017 Junior European Champion, Irem KORKMAZ (TUR). BABAMURATOVA scored the first waza-ari with a tani-otoshi and concluded a few seconds later with a counter attack for ippon this time, giving no chance to the Turkish. This is the fifth Grand Prix medal for BABAMURATOVA.

In the second bronze medal contest, Israel secured a medal as both Betina TEMELKOVA, who used to compete for Bulgaria but already won the Tashkent Grand Prix last year under the Israeli colours, and the 17-year-old Gefen PRIMO were qualified. Exactly half way to the end, PRIMO scored first with a uchi-mata for waza-ari. Despite some strong attack from TEMELKOVA in sutemi-waza (Yoko-tomoe-nage), the victory went to PRIMO who could keep her waza-ari advantage until the end of the contest. 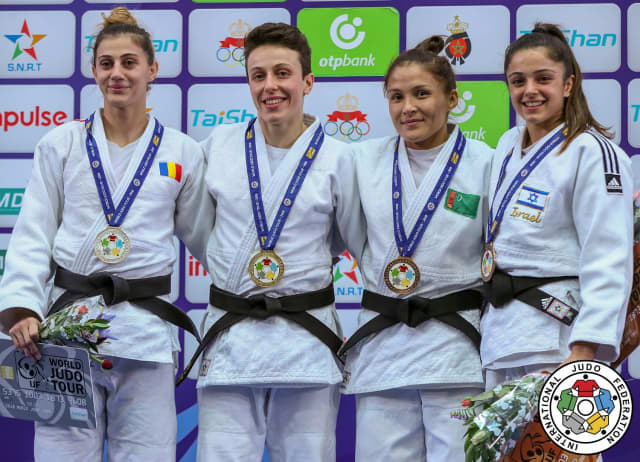 -57kg: NELSON LEVY Tops the Podium for Israel
Miryam Roper (PAN) was expected to qualify for the final but she was defeated in the previous round by Kaja KAJZER (SLO) in golden score. The Slovenian was opposed to world number nine and Tashkent Grand Prix silver medal Timna NELSON LEVY (ISR) in the final. After thirty seconds, NELSON LEVY caught KAJZER on the floor with an immobilisation but the Slovenian escaped at the very last second and only waza-ari was scored. With one minute left on the scoreboard, the Israeli was still leading and perfectly controlling KAJZER to strike gold. 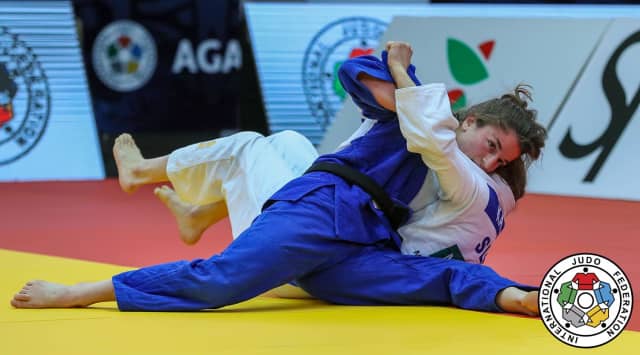 The first bronze medal contest opposed the 2015 Junior World Championships bronze medallist, Sarah HARACHI of France and Soumiya IRAOUI (MAR), who was strongly supported by the public. But despite the support of her public, IRAOUI could do anything to stop HARACHI who executed a perfect movement on the floor to immobilise the Moroccan for ippon and to win a first medal on the international circuit.

In the second bronze medal contest, Miryam Roper still had a chance to once again step on the podium as she was qualified against the second French judoka Lisa MARCHESE, who so far never won any medal on the international circuit. ROPER scored first with a trademarke ko-soto-gari for waza-ari and was close to scoring a few seconds later with an o-uchi-gari but the French could avoid it at the very last moment. But that just postponed the final result, as Miryam Roper finally controlled her opponent on the floor with an immobilisation for ippon and a fourth IJF medal for her under the Panama colours. 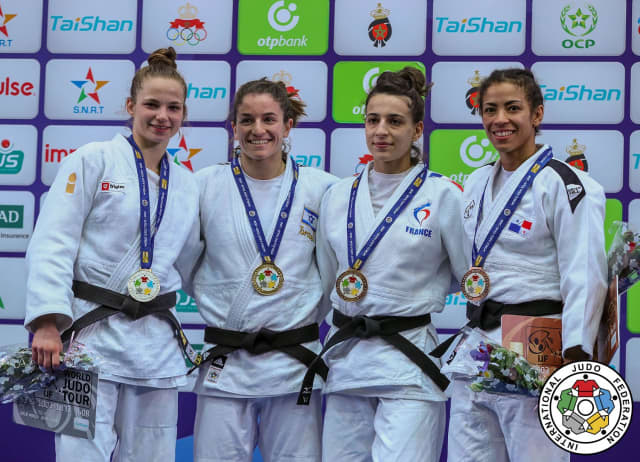 -60kg: KYRGYZBAYEV Dominates the Lightweight Category
In the men's lightest weight category, the two top athletes of the day qualified for the final as world number nine and Tashkent Grand Prix bronze medallist Gusman KYRGYZBAYEV (KAZ) qualified against The Hague Grand Prix winner Bekir OZLU (TUR). The later was penalised with a first shido for a forbidden grip (pistol grip), followed by a second penalty for blocking his opponent. But it was then the turn of KYRGYZBAYEV to be penalised for avoiding OZLU. With less than one minute left on the clock, KYRGYZBAYEV launched a extraordinary hip technique but it was so vast that OZLU turned enough in the air to land on his stomach for no score. It was time for the golden score and six seconds were enough for KYRGYZBAYEV to launch a o-goshi for waza-ari. 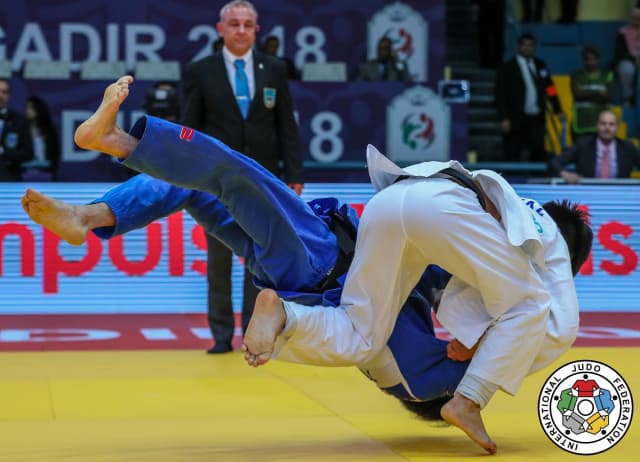 The first bronze medal contest saw Goncalo MANSINHO (POR), bronze medallist already in Morocco, two year ago (African Open) facing Moritz PLAFKY (GER), who had never reached an IJF World Judo Tour podium, for a place in the top four of this first Grand Prix in Agadir. After one minute and a half, the first penalty was given to the Portuguese for a false attack. Goncalo MANSINHO seemed under pressure when he suddenly engaged a quick o-soto-gari for ippon to win bronze.

The second bronze medal contest opposed two home athletes to secure a first medal for the host country in the men's division. Thus Issam BASSOU (MAR) faced his teammate Yassine MOUDATIR (MAR). Only 25 seconds were necessary for Issam BASSOU to push his opponent on the side of the competition area and to make him react to engage a superb left-handed uchi-mata for ippon and the first medal for Morocco. 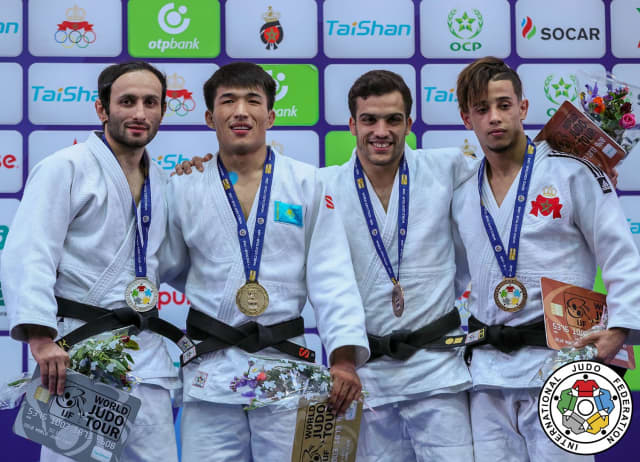 -66kg: Outsider Gomboc Win Gold in Morocco
The men's -66kg was the category of many surprises today as both top seed athletes were defeated by the subsequent finalists. Georgii ZANTARAIA (UKR) was eliminated in the first round by Adrian GOMBOC (SLO) and three time world silver medallist, Mikhail PULIAEV (RUS) was beaten by Yerlan SERIKZHANOV of Kazakhstan. As both athletes were very active throughout the regular time but couldn't score, they entered the golden score with nothing written on the scoreboard. Only 30 seconds later, SERIKZHANOV was penalised for the very first time and was then thrown by GOMBOC with a sumi-gaeshi for waza-ari. This is the second gold medal in a Grand Prix for the Slovenian athlete, but today it has a special taste as there were big favourites in this category and Gomboc was only 39th in the World Ranking List this morning. Still, Gomboc is not totally unknown as he was fifth in Rio in 2016 and a European Silver Medallist last year at the European Championships. 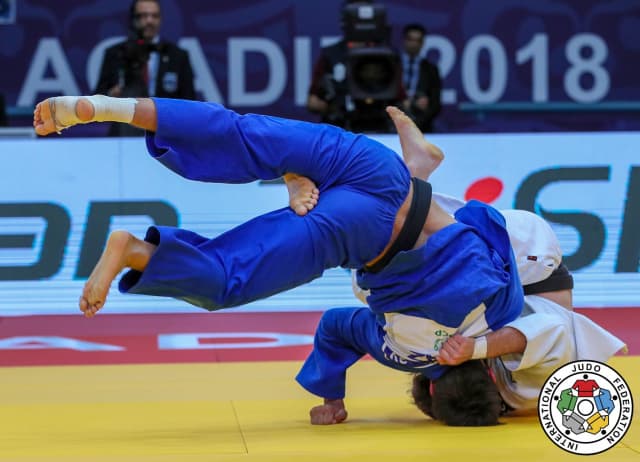 The first bronze medal contest opposed the 21 year old Daniel JEAN (FRA), who had no record in the senior division up to now, and Sergiu OLEINIC (POR), who had three Grand Prix medals on his name, before the start of the competition. After a minute, the French was already penalised with one shido, but he took the lead a few seconds later with a left handed harai-goshi for a waza-ari. JEAN was penalised a second time for blocking his opponent, putting him in danger of a third penalty. Totally exhausted, he could still control OLEINIC, to seal a first medal in a Grand Prix.

In the second bronze medal contest the second Slovenian competitor Andraz JEREB (SLO) faced off with the second Kazakh Yerlan ZHAKSYBEKOV (KAZ). The danger came first from ZHAKSYBEKOV, but JEREB could acrobatically escape from his uchi-mata. The latter then scored a waza-ari as he countered the second uchi-mata attempt from the Kazakh. Uchi-mata was definitely not the solution against Andraz JEREB, as he once again counterattacked ZHAKSYBEKOV, in uchi-mata-sukashi for a second waza-ari. 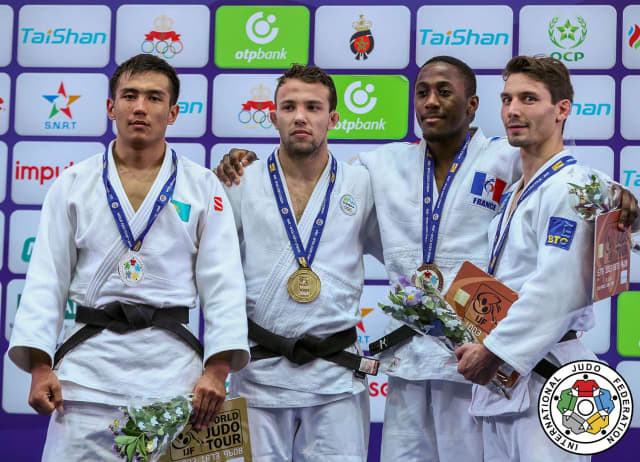