Written by Jo Crowley on 06. Nov 2022
Photographs by Gabriela Sabau, Tamara Kulumbegashvili
Share
Mehdiyev (AZE) and Majdov (SRB) gave us a quarter-final to savour. It was exciting from start to finish with the audience on their feet cheering for their athlete. Golden score began without anyone really noticing because the judo was such a furore. Ten minutes of back and forth and with both intending to throw throughout and still no score, but two shido each indicated a possible imminent conclusion.

However, judo being judo and great athletes being great athletes, what we think might happen isn’t always the script they choose and at 12 minutes and 5 seconds 2017 world champion Majdov hooked in and threw for ippon with ko-uchi gake. It was proof again that good judo is always the answer. That set him up for a semi-final against Parlati (ITA), the number 4 seed.

Having endured 3 minutes of golden score in round two and 7 minutes of added time in the quarter-final, Majdov could have been forgiven for wishing for an easy run in the semi-final against Parlati but the WJT is all too aware that the Italian is never going to make it easy for anyone. To add intensity to an already power-packed meet, let’s also absorb that the coaches in this instance are also the parents, a beautiful anomaly, raising the level of emotion and therefore discipline for all concerned.

It's a family thing!

Guess what? This turned into another dynamic match with attack after attack being annulled. Each initiated, each countered and the pace was furious. It continued like that right through normal time and into golden score, again. Poor Majdov! His response to the clock was to pull on the reins via a massive o-soto-gaeshi and stop the contest in its tracks at 17 extra seconds. Parlati didn’t expect the counter as Majdov had a strange grip with one hand high and the other on the back of the belt but the counter came and it was a massive. 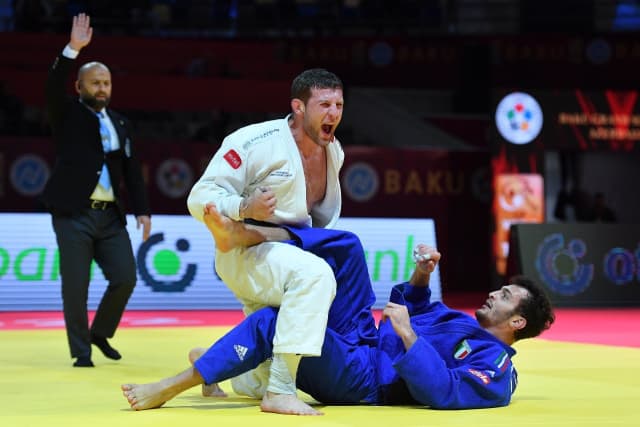 Mehdiyev passed his teammate Fatiyev to reach one bronze medal contest; we are not surprised. This former world number 1 is a hard man to knock down. The other bronze medal bout was contested by Majdov’s fellow semi-finalist, Parlati, and Matijass (GER), who had a good morning from his unseeded starting point, beating number 3 seed Toth (HUN) in the quarter-final before taking a loss against Sweden’s Nyman. Nyman also came from nowhere and cruised past Aghakidhiyev (AZE), Smink (NED) and then the German.

We have spoken a lot about Mehdiyev today but he is always so entertaining and dangerous. He brings unpredictable situations and we always love to see that. He fought Georgian dynamo Maisuradze for the bronze on this third day in Baku and the match went the way we expected, in that it was non-stop action but it was the Georgian who breathed out a sigh of relief at just over a minute into golden score. Maisuradze had managed to latch on with a little hook inside and snatch the medal away for the Azeri. 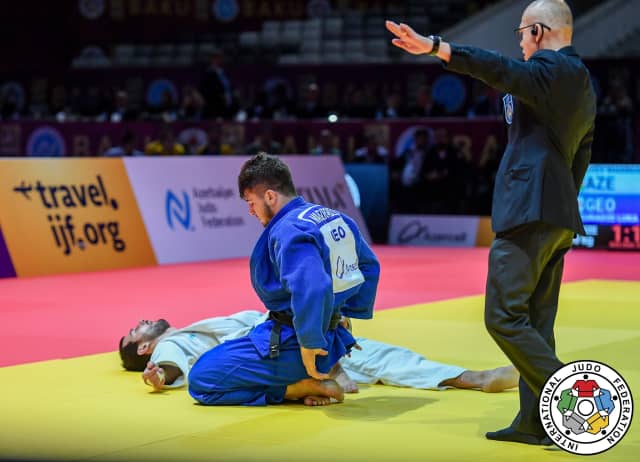 Parlati won the second bronze that came from an ippon throw that can only be felt in situ’. The German picked him up and it looked like a finisher but Parlati hooked on to the outside with ko-soto-gake and drove Mattijas to the floor. 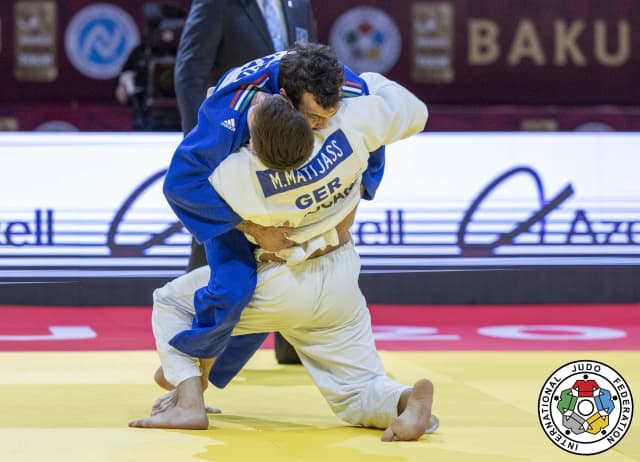 As they left the arena he kissed his father and coach on the head as they agreed on it being a job well done. 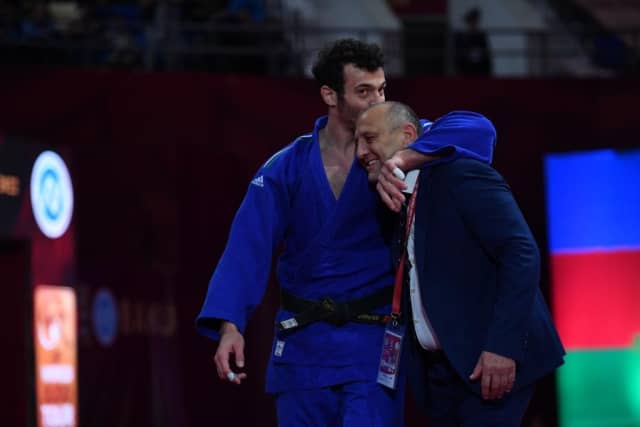 Majdov had a clear strategy for the final, to outgrip the Swede and cancel out his physical onslaught. It worked very well according to our impressions for 90% of the contest but with 18 seconds to go Nyman released himself and came under Majdov’s arm spinning him round and to the floor. A second drive to ensure Majdov’s back contacted the mat meant it wasn’t scoreable but it did threaten and showed what Nyman can do when moving with freedom. Majdov went back to his original strategy and a minute into golden score he was up, two shido to one.

At two minutes into golden score Nyman got his grip under the arm for only the second time and executed exactly the same spin but with more drive and determination. A waza-ari and a gold medal were his reward and after an outstanding day of judo Majdov had to be content with silver. 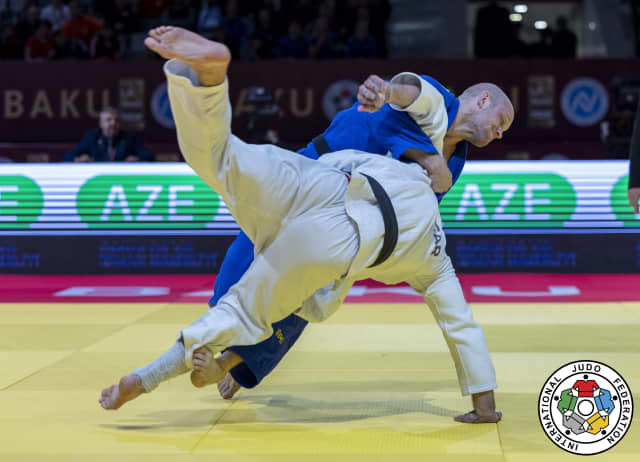 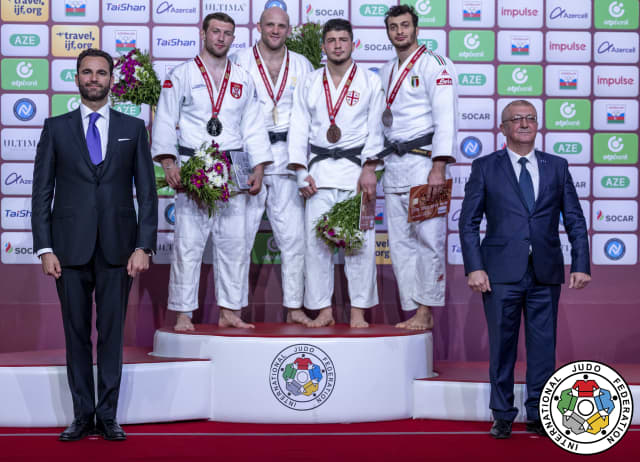 Medals, cheques and flowers were presented by Mr Vlad Marinescu, Director General of the International Judo Federation and Mr Nazim Huseynov, Olympic champion and board member of the Azerbaijan Judo Federation 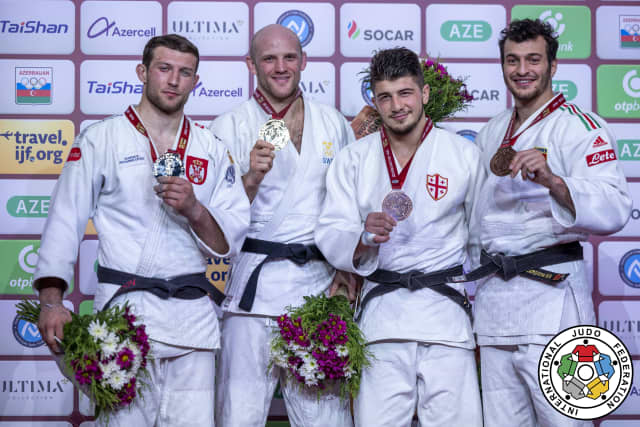