Former world champion HAMADA Shori (JPN) dominated double Olympic bronze medallist Mayra AGUIAR (BRA) to win her second Grand Slam gold medal. HAMADA extended her winning record against the Brazilian to 3-0 by pinning down AGUIAR for 20 seconds with a yoko-shiho-gatame. The Japanese star secured osaekomi twice but AGUIAR slipped out on both occasions only for the fascinating ne-waza exchange to continue as HAMADA, who hails from the same University as Canada’s world champion Christa DEGUCHI (Yamanashi), was still active and settled into a more powerful position from which her familiar foe could not escape. 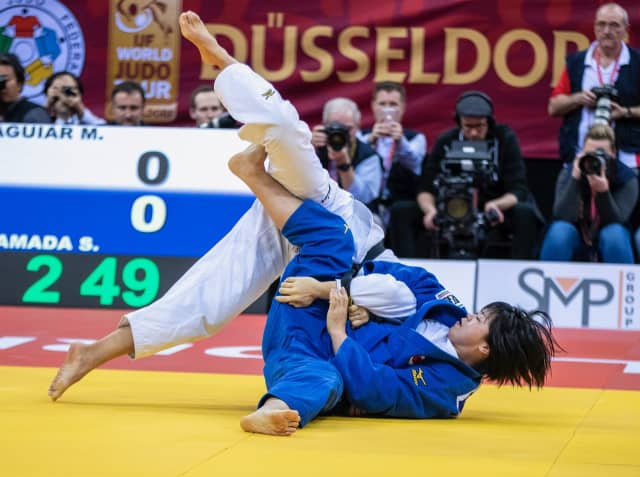 In the first semi-final Paris Grand Slam bronze medallist Kaliema ANTOMARCHI (CUB) was caught by AGUIAR for a waza-ari score from a ko-uchi-gari after 47 seconds of golden score. 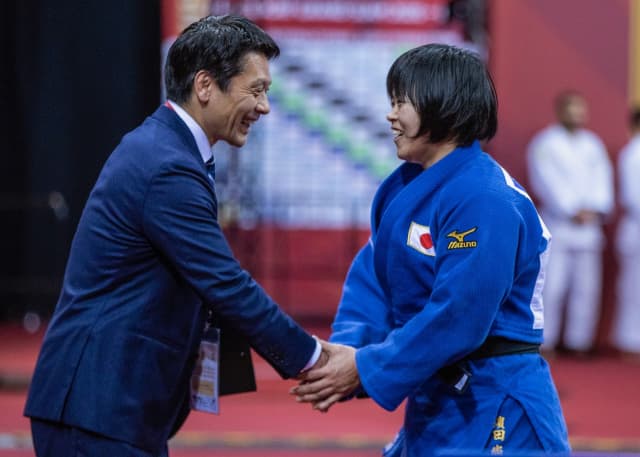 In the second semi-final HAMADA showed off her ne-waza prowess as she maneuverered Tel Aviv Grand Prix bronze medallist Patricia SAMPAIO (POR) on the ground to secure osaekomi to advance to the gold medal contest.

The first bronze medal contest was won by Paris Grand Slam silver medallist Fanny Estelle POSVITE (FRA) who triumphed over Olympics-bound SAMPAIO in a scrappy contest. Three minutes of golden score was required to produce a winner as the Portuguese was finally dismissed after picking up her third shido for a false attack.

The second bronze medal was won by world number three Anna Maria WAGNER (GER) after ANTOMARCHI could not free herself from an o-uchi-gari effort from the home judoka who won by ippon after only 35 seconds. The attack started inside and WAGNER pushed and pushed until she finally broke the balance of her opponent to bring the crowd to their feet at the ISS Dome. 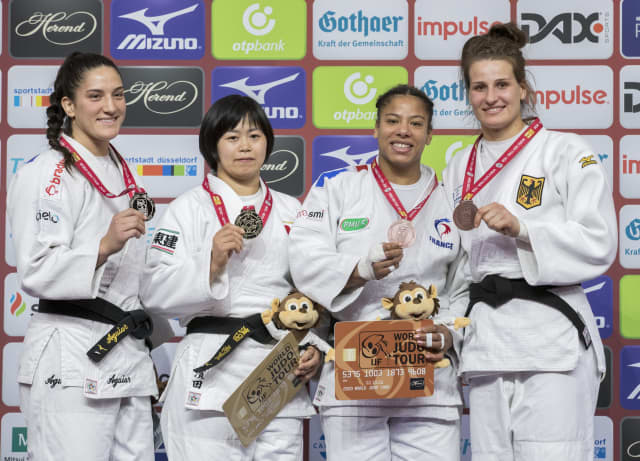 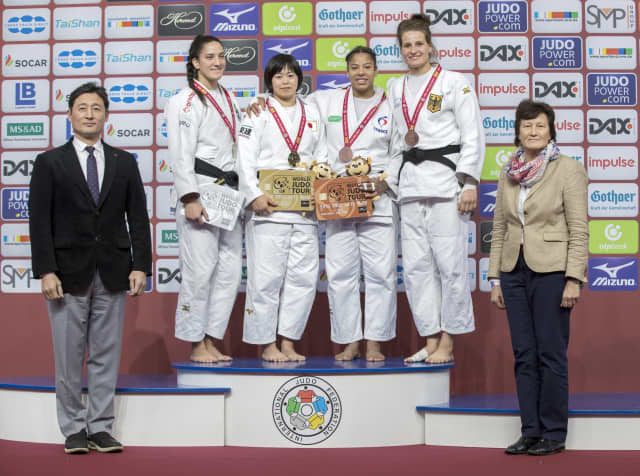 Double world champion ASAHINA Sarah (JPN) earned her sixth Grand Slam title with a professional display against world number four Iryna KINDZERSKA (AZE) in the women’s heavyweight final. After missing out on selection for the Tokyo 2020 Olympics, which went in favour of teenager SONE Akira, ASAHINA returned to the competition circuit for the first time and with a wait of pressure lifted off her shoulders. While her ever-present father ASAHINA Terry screamed words of encouragement from the stands, the Kodokan Judo Institute product outworked KINDZERSKA who received three penalties and was disqualified. 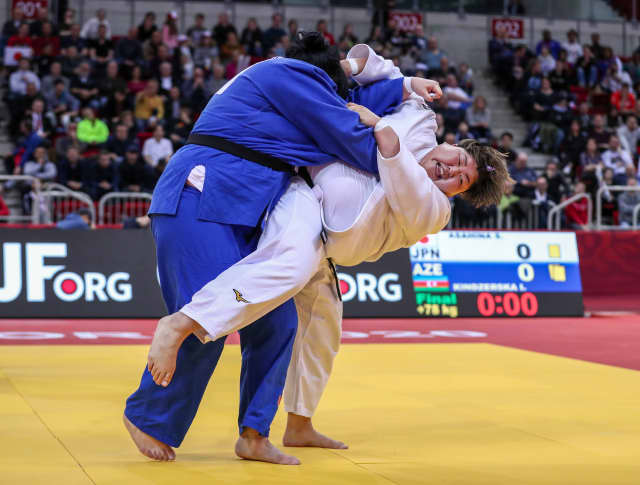 In the first semi-final ASAHINA defeated world number one Idalys ORTIZ (CUB) after pinning down her rival following a sasae-tsurikomi-ashi which opened the scoring as the Japanese signalled her return to form. 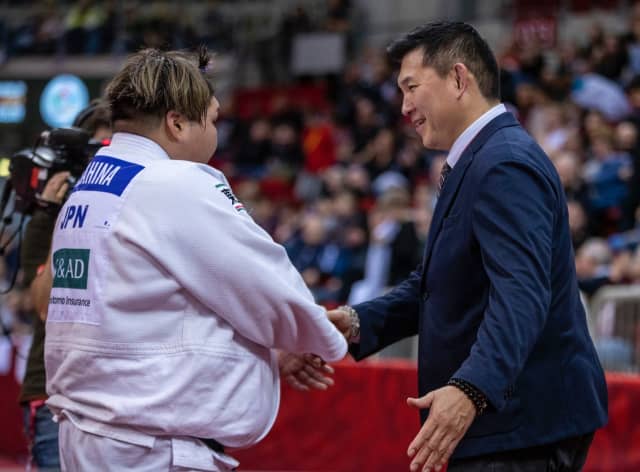 The first bronze medal was won by MBALLA ATANGANA who made history for Cameroon as her country’s first Grand Slam medallist. MBALLA ATANGANA matched world number 12 Anne Fatoumata M BAIRO (FRA) for the majority of the contest as they were tied at a waza-ari apiece before the African judoka registered a second score to lock down a place in the record books. 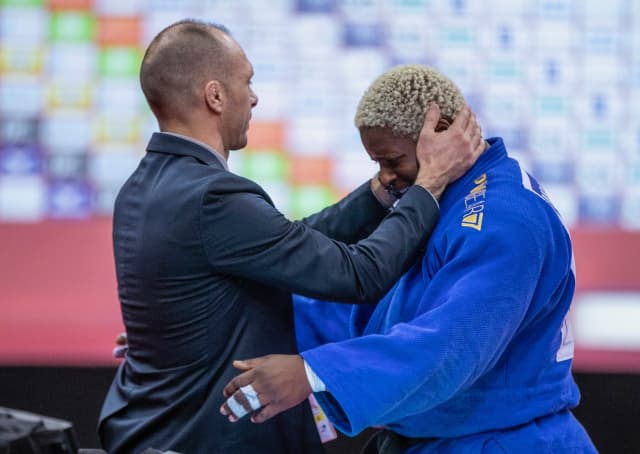 The second bronze medal was won by ORTIZ who edged out Paris Grand Slam bronze medallist Beatriz SOUZA (BRA) in a case of the champion having an edge over the contender. ORTIZ, the standard bearer for women’s heavyweight judo over the last decade, showed her class to see off one more new challenger in the form of the rising young Brazilian by a waza-ari score. 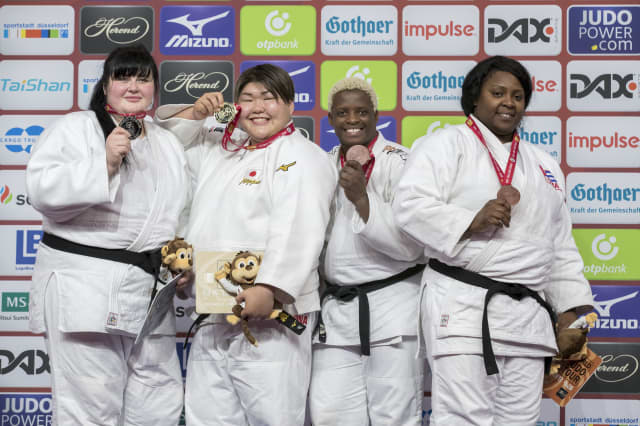 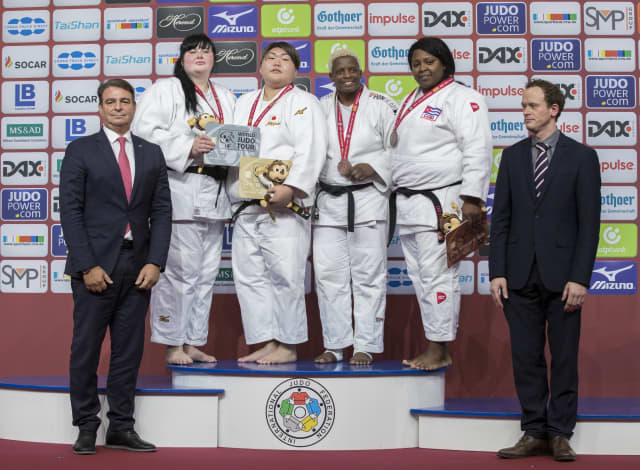 Osaka Grand Slam silver medallist Davlat BOBONOV (UZB) needed just 59 seconds to defeat Marrakech Grand Prix bronze medallist Quedjau NHABALI (UKR) to win his first Grand Slam title on Sunday. World number 37 BOBONOV, who is one of the leading projects under the leadership of the legendary Ilias ILIADIS, emulated the exploits of his new head coach by thrilling the crowd with one of the best performances of the weekend. BOBONOV improved on his silver from Osaka by countering NHABALI with an uchi-mata-sukashi and then picked up his Ukrainian for a second and decisive waza-ari score. 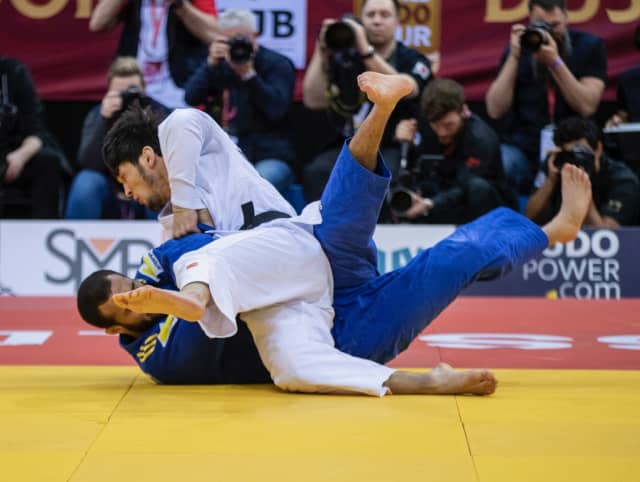 In the first semi-final BOBONOV blasted past former world silver medallist Ivan Felipe SILVA MORALES (CUB) by a seoi-otoshi and then a gigantic pick up as he overwhelmed his Cuban rival. 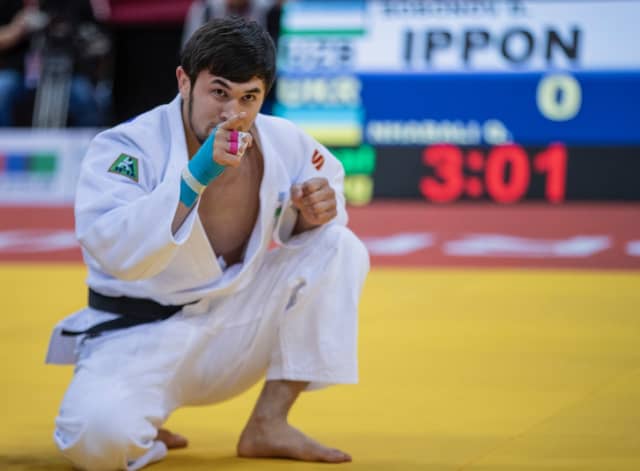 In the second semi-final NHABALI came from behind to beat world number five Mammadali MEHDIYEV (AZE) by ippon to grace a Grand Slam final for the first time.

The first bronze medal was won by Osaka Grand Slam winner Beka GVINIASHVILI (GEO) in a frenetic contest against MEHDIYEV. GVINIASHVILI stepped up in golden score and countered his Azeri rival after 42 seconds with a ura-nage for a waza-ari score to please the large and vocal contingent of Georgian supporters.

The second bronze medal went to Osaka Grand Slam bronze medallist MUKAI Shoichiro (JPN) after SILVA MORALES got wrapped up by the Japanese and thrown with a o-soto-makikomi after 18 seconds of golden score. MUKAI, who prevailed by a waza-ari score, absorbed a barrage of attacks from the Cuban and maintained his 100% record against the world number four to strengthen his Olympic bid. 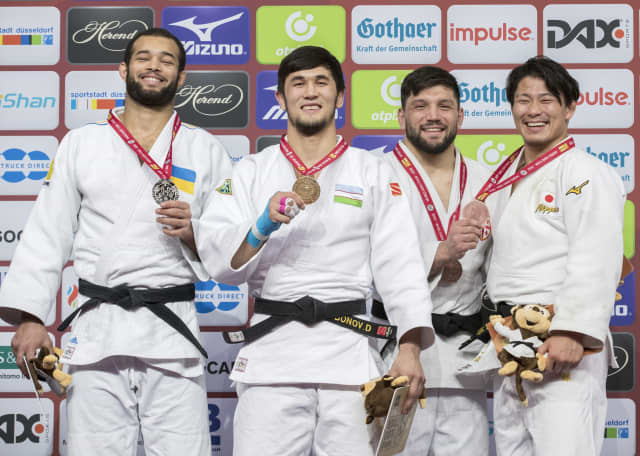 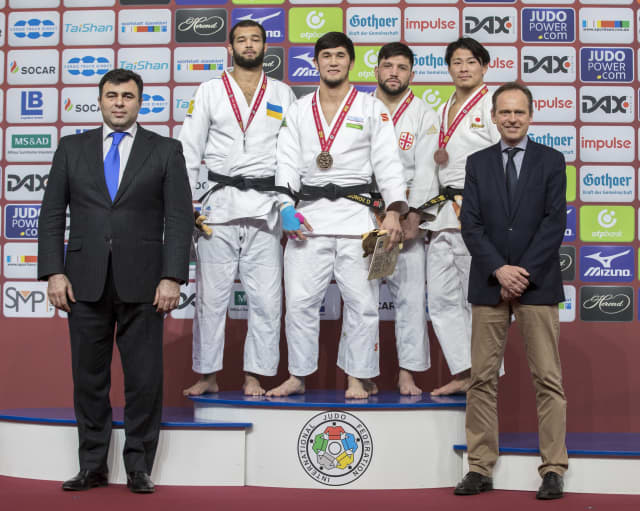 Asian-Pacific Championships silver medallist Mukhammadkarim KHURRAMOV (UZB) doubled his country’s golden medal haul on day three after a fine win over Olympic silver medallist Elmar GASIMOV (AZE). First-time Grand Slam finalist KHURRAMOV took the final to veteran GASIMOV who turned out of several attacks from the Uzbek who pushed the pace, under the instructions of ILIADIS, until the Azeri was given his third shido for passivity. 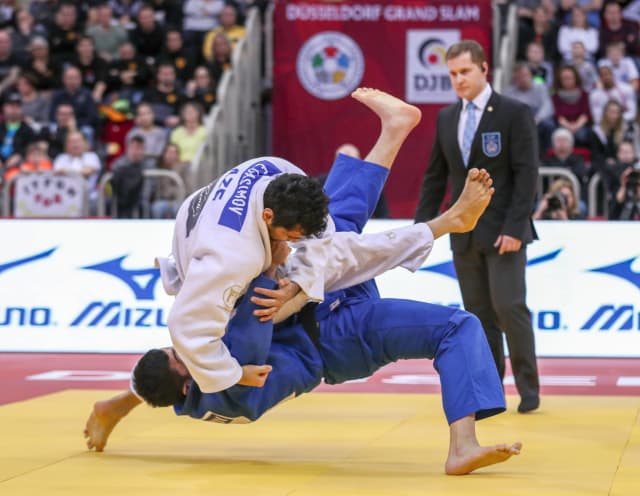 In the first semi-final world champion Jorge FONSECA (POR) fell to GASIMOV after 26 seconds of golden score. The formidable seoi-nage of FONSECA was blocked and the Azeri to control to register a waza-ari score and secure a place in the final. 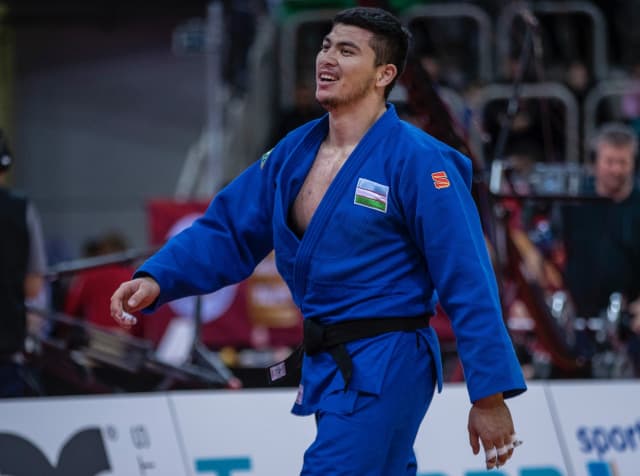 In the second semi-final Tel Aviv Grand Prix bronze medallist Rafael BUZACARINI (BRA) lost out to KHURRAMOV by ippon as the Uzbek men’s team were on a roll on Sunday.

The first bronze medal was won by Brasilia Grand Slam bronze medallist CIRJENICS Miklos (HUN) who dropped under BUZACARINI with a morote-seoi-nage for ippon after two minutes to open his country’s medal account in Germany.

The second bronze medal went to Abu Dhabi Grand Slam silver medallist Zelym KOTSOIEV (AZE) who earned a major scalp by beating misfiring world champion FONSECA. KOTSOIEV had success with his o-uchi-gari on two occasions as he earned a waza-ari on both attacks to deny the Portuguese star with 54 seconds left on the clock. 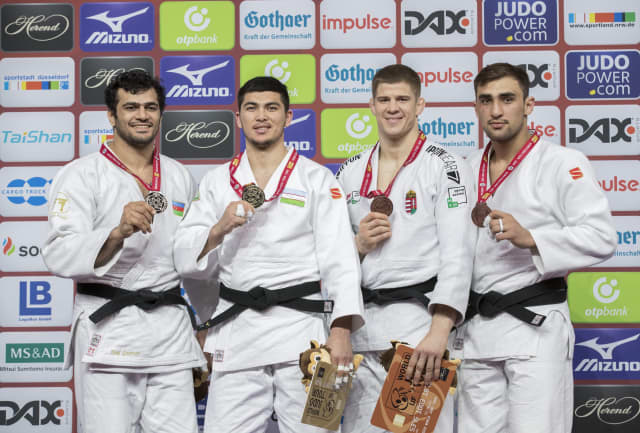 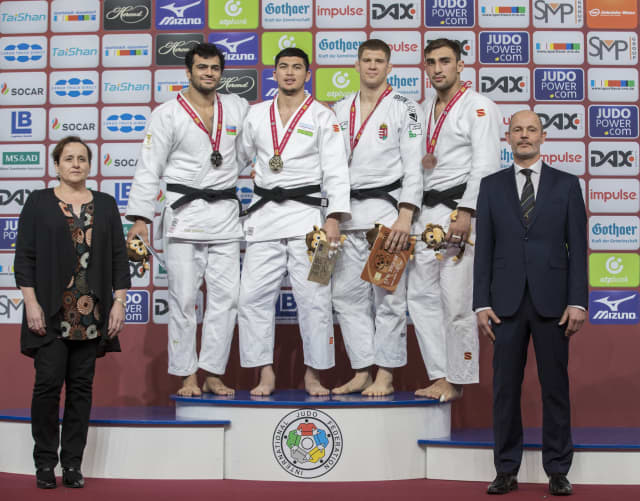 Former world champion Guram TUSHISHVILI (GEO) made a successful return to IJF World Judo Tour duty as he beat one-time Grand Prix winner Johannes FREY (GER) in men’s heavyweight final. TUSHISHVILI, who was making his first appearance on the circuit since September, was a class above the field today as he won all five of his contests by ippon. FREY was sent over for the maximum score from a sode-tsurikomi-goshi in the opening minute as the Georgian struck for the second Grand Slam gold medal of his career. 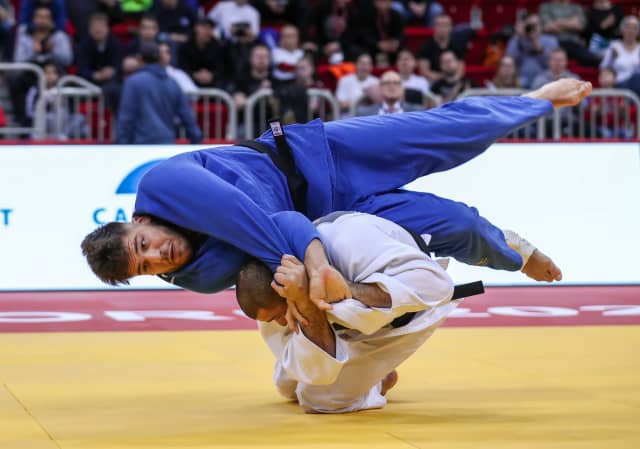 In the first semi-final double Olympic bronze medallist Rafael SILVA (BRA) was disqualified against TUSHISHVILI after a toothless performance which saw him receive three shidos. 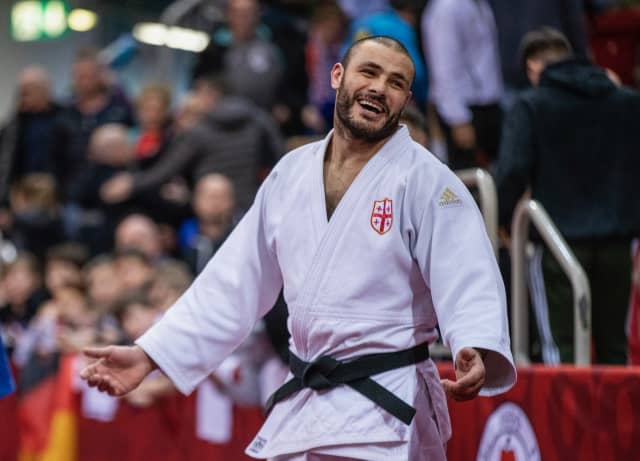 In the second semi-final FREY thwarted world bronze medallist Roy MEYER (NED) as the home judoka made sure that Germany would medal in the final block on the last day and be represented in the very last contest of the competition. FREY conquered MEYER by a waza-ari score having seen his older brother Karl-Richard FREY (GER) fall in round three of the -100kg category.

The first bronze medal was won by KIM Minjong (KOR) who defeated fellow world bronze medallist MEYER after two and a half minutes of golden score. KIM utilised his sutemi-waza to throw the Dutch powerhouse, who had has family in the crowd, with a yoko-guruma for ippon and appears on course for Olympic selection.

The second bronze medal went to SILVA after 18-year-old world number 53 Richard SIPOCZ (HUN) was asked too much by the Brazilian on the international stage. SIPOCZ was penalised for the third time with 25 seconds left for a false attack but secured a wealth of ranking points after a career-best fifth-place finish at a Grand Slam and earned a giant-sized hug from man-mountain SILVA. 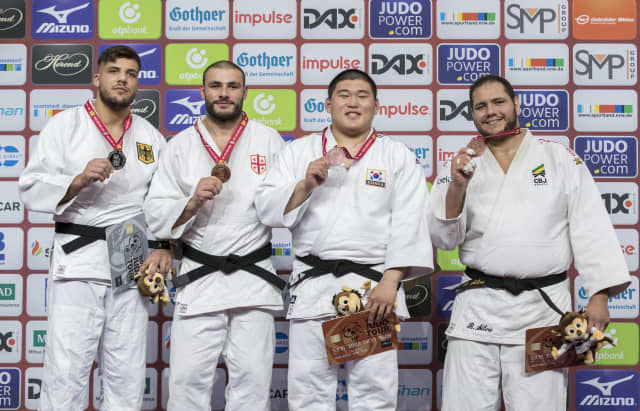 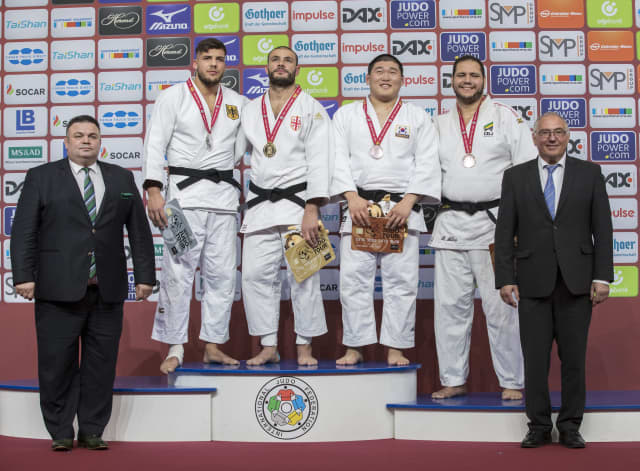