A New Generation is Born

Written by Nicolas Messner on 28. Aug 2022
Photographs by Lars Moeller Jensen, Tamara Kulumbegashvili
Share
The Sarajevo World Judo Championships Cadets 2022, in Bosnia and Herzegovina, concluded with the victory of team France, who had already dominated the individual competition. It was not an easy win, far from it actually. To summarise the whole week, we can say that we have seen, in front of our eyes, a new generation of champions being born in one of the best ever world championships for cadets organised.

Some will say that the film's script was perfect, others that all the ingredients were there to concoct a delicious dish. What is certain is that the mixed team tournament of the Sarajevo World Judo Championships Cadets 2022 lived up to expectations, after an individual tournament that also kept all its promises. 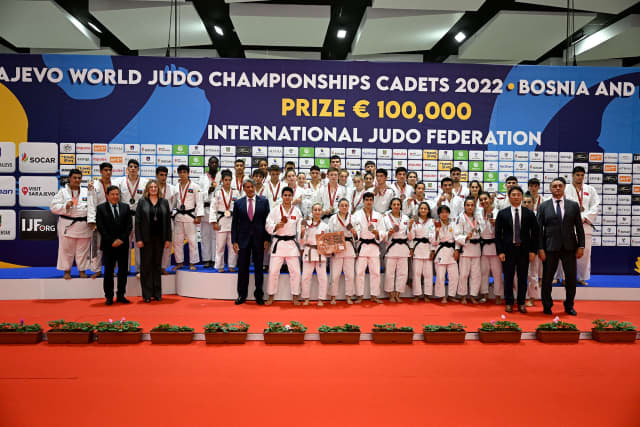 From the first minutes of competition, we felt it, the matches were going to be heavily disputed and although certain delegations dominated the first days of competition, everything was possible. What we had throughout the day was intensity and engagement, abnegation and dedication, motivation and spirit. We had all that and much more. 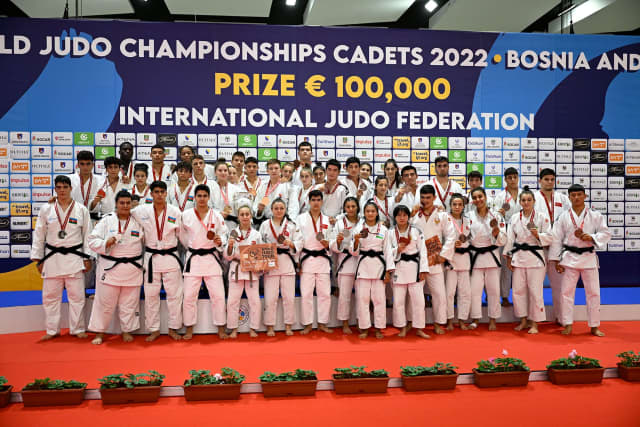 Team France, which finished at the top of the medal table in the individual competition, did not have what we used to call a walk in the park, actually the opposite. Opposed by a valiant team from Brazil in the first round, the score was tight (4-2) but that doesn't show the intensity of the contests. It was even more intense in the second round, with it being necessary to wait for the draw of the 'golden score' category, for France to qualify for the semi-final, to the detriment of team Türkiye who believed in it until the last second. 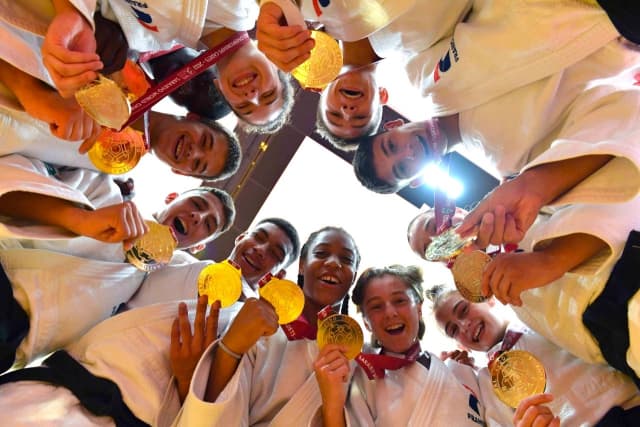 In the French half of the draw, Tunisia created a surprise by eliminating Georgia, thus rising, for the first time in its history, to the semi-finals of a world championship. In their semi-final, the French left no chance for the Tunisians, although the latter did not have to be ashamed of their performance, quite the contrary. They did what they could. France was stronger, but the French athletes still had to give it all to win their ticket to the final. We have seen in the past, favourite teams, built on incredible judoka, but unable to perform when gathered together. It would not be fun if everything were written in advance. This is definitely not and will never be the case in judo. Furthermore, even when the top team wins, this never means that it is a piece of cake. 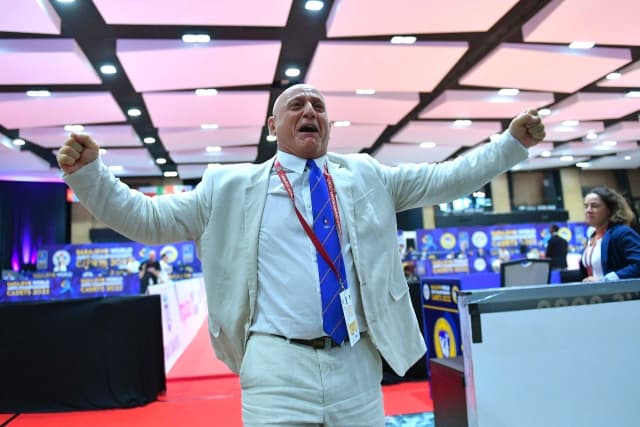 At the top of the draw, in the other semi-final, Ukraine had its fate in its hands against Azerbaijan but with a 3-3 score after the first six matches, everything was decided via golden score, for an Azerbaijani victory.

At the end of the preliminary rounds, Turkiye and Ukraine and Uzbekistan and Tunisia were to compete for the bronze medals, while France and Azerbaijan met in the final. 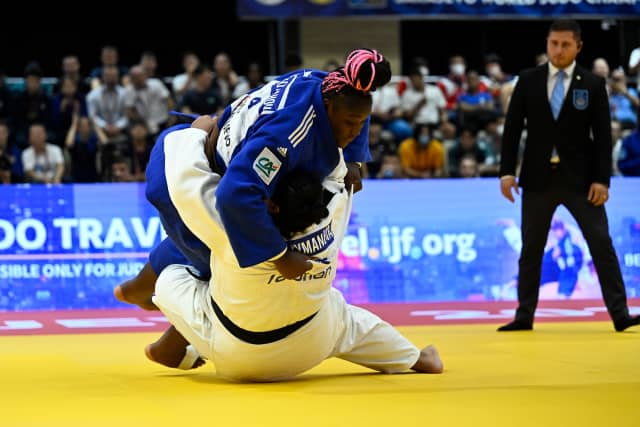 At +81kg, we could feel from the beginning that it would not reach the end of the allotted time and we didn't have to wait long. In a counter-to-counterattack situation, Ramazan Ahmadov turned the power to his advantage and sent Matheo Akiana Mongo to the ground with a massive ippon; 2-1 to Azerbaijan. 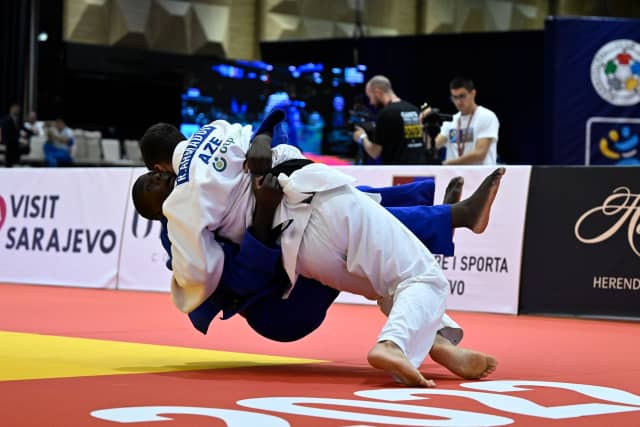 With a first waza-ari from an o-uchi-gari technique, Aydan Valiyeva entered the -48kg contest perfectly. The rest of it was a sum of penalties to the advantage of Valiyeva who added one more point to Azerbaijan’s record; 3-1. The next bout, between Nizami Imranov and Kelvin Ray could have been decisive but after an impressive contest, Imranov was disqualified for a head dive; 3-2. Everything was still possible. 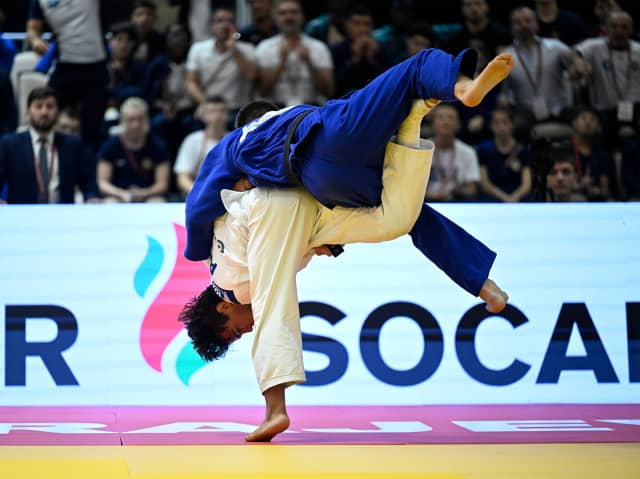 The suspense was at its maximum when Thomas Puchly scored ippon against Ali Hajizada. France was back in contention; 3-3. It was time to draw the weight category that would decide the winner. Once again, everything was still possible. -63kg appeared on the big screen and that meant tears on the Azerbaijan side since they had no athlete in that category. 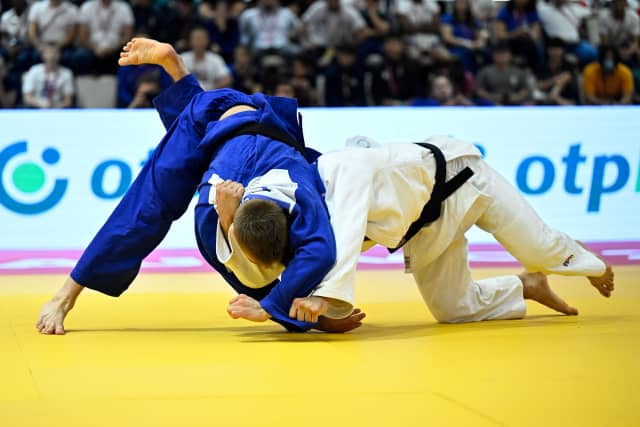 There was a massive explosion of joy on the French side, understanding the gold medal was theirs. The 2022 season ended in the perfect fashion for France Judo: First nation during the individual competition and now cadet mixed team world champions. A new generation is born in France but also in many other countries across the planet. 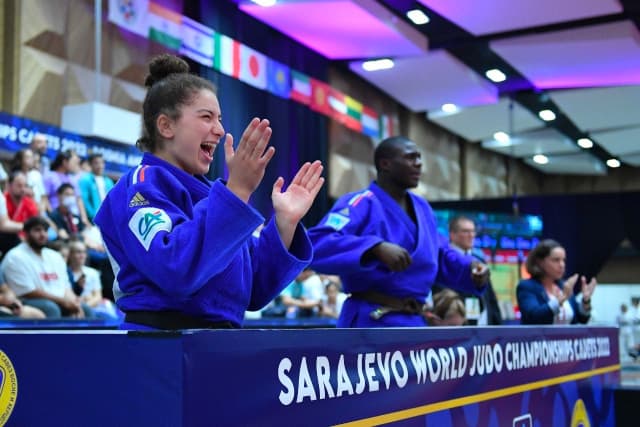 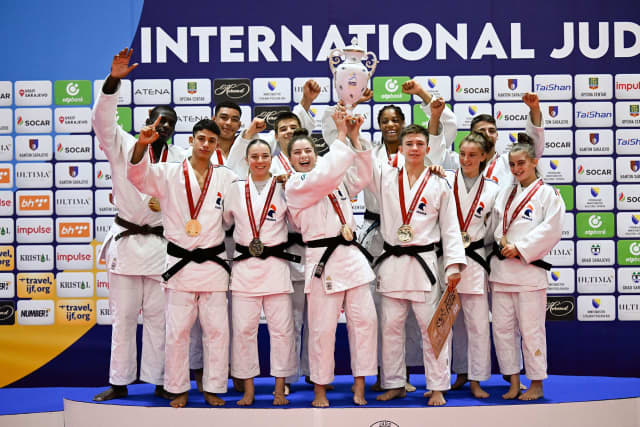 Team France with the trophy designed by Herend Porcelain

Starting 2-0 down is not easy. This is what happened to Tunisa, who could only present four judo players. Mathematically it was still possible to win though, but things became even more complicated for Tunisia when Elnur Kholmuminov defeated Karim Gharbi by a single waza-ari: no more mistakes allowed. 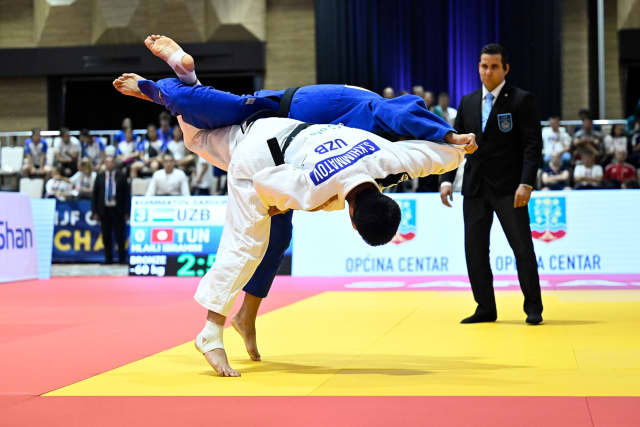 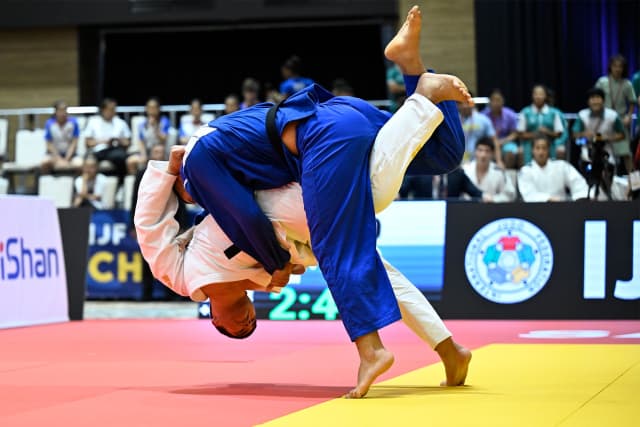 During the match between Sardor Khimmatov and Ibrahim Hlaili, there was no suspense, Khimmatov scoring a first waza-ari and concluding a little later with an immobilisation for ippon. The hill was definitely too high to climb for team Tunisia. It remains valid though that they did a fantastic job today in Sarajevo. Uzbekistan wins the first bronze medal of the day. 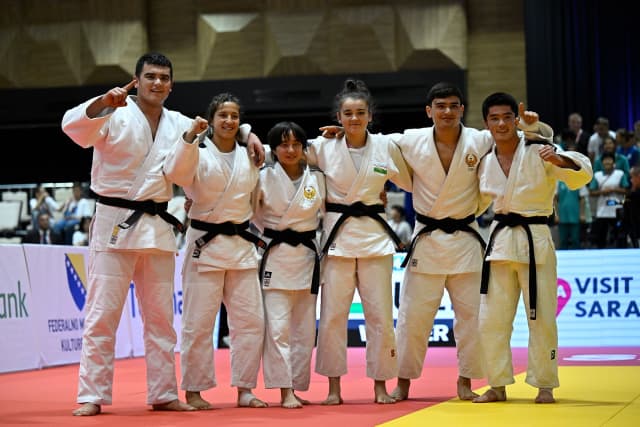 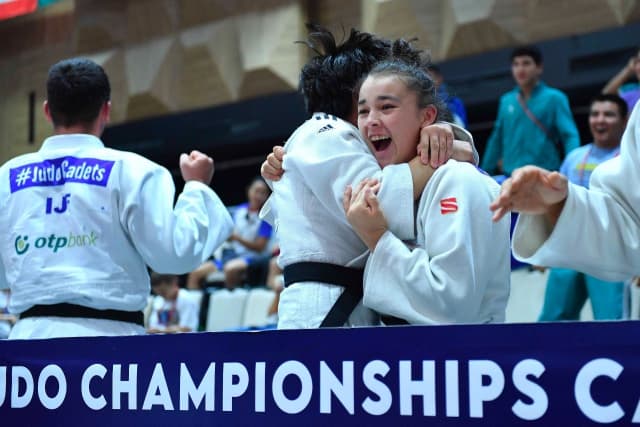 Right on the bell, Diana Semchenko scored the first point for team Ukraine, after a shido-free contest that seemed bound for golden score, but in judo everything is possible, especially the possibility to score at the last second and this is what happened. Semchenko employed a beautiful ko-uchi-gari makikomi. The second match did go to golden score, after an impressive first four minutes, with Tataroglu and Kviatkowski each scoring waza-ari. At the beginning of golden score, Tataroglu scored point number one for team Türkiye, with his second waza-ari, taking it it to 1-1. 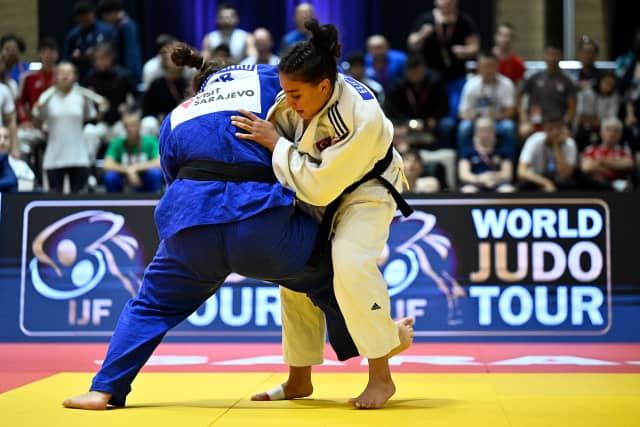 The second point for Türkiye was won by Zeynep Betul Sarikaya after a long golden score, concluding with a shido victory; 2-1 to Türkiye. The Turkish lead was not long as Nazar Viskiv quickly scored ippon with a perfectly executed juji-gatame; 2-2. Like in a ping-pong game, the next point was again won by Türkiye with Gulzade Kormaz delivering a really good match against Anna Oliinyk-Korniiko, who was clearly taller and more powerful but who could not avoid the intensity served by Kormaz; 3-2. The last point then went to Ukraine; 3-3. 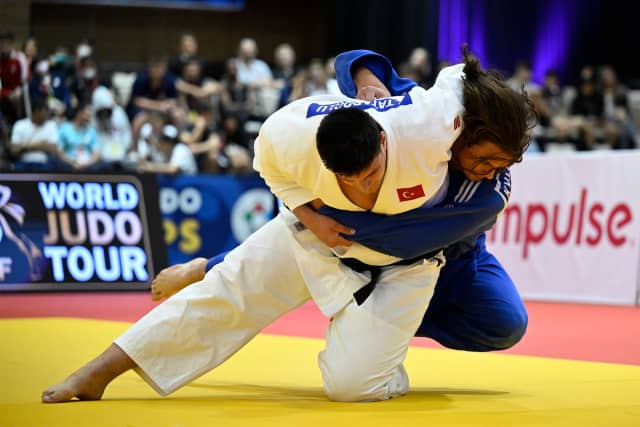 The victory had to be decided between Zeynep Betul Sarikaya and Anastasiia Levchenko in a golden score only contest. After an already intense match during normal time, who would win? Would Levchenko take her revenge or Sarikaya consolidate her first win? We had the answer fast, as Sarikaya threw her opponent with a seoi-nage for waza-ari almost immediately. 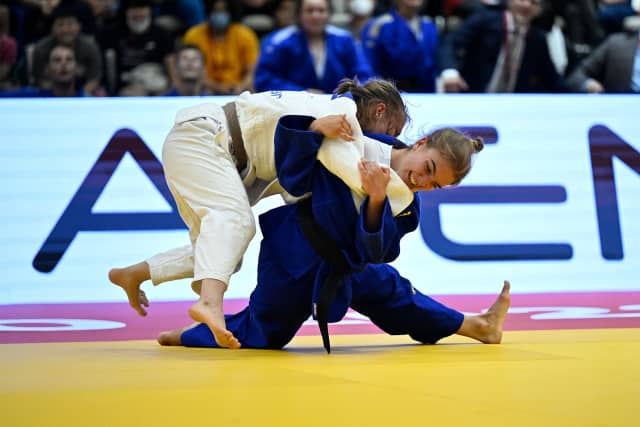 As one of the lightest competitors of the competition, she is the brightest star of team Türkiye today. With this bronze medal going to Türkiye after the silver medal a few weeks ago in the junior division in Ecuador, this confirms one more time the really good shape of Türkiye’s judo system. 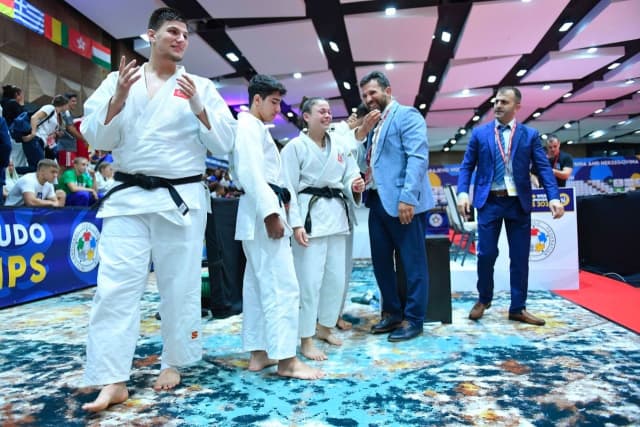 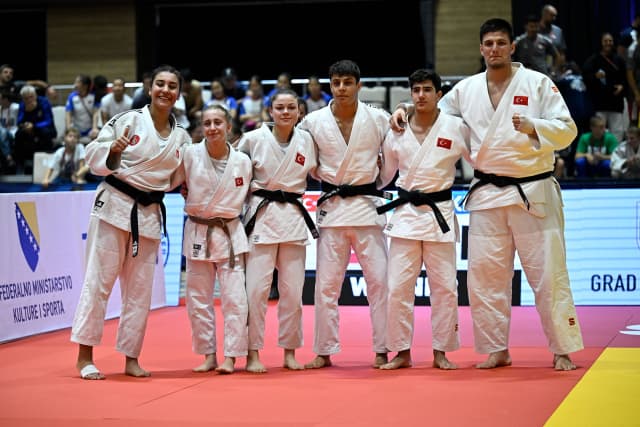