Former world champion UMEKI Mami (JPN) walked away from Budapest with gold for the first time in her career having finished second at the Worlds a year ago and fifth at the Grand Prix in 2015. UMEKI, who was a surprise winner of the World Championships in 2015, took the final to her compatriot and Ekaterinburg Grand Slam winner TAKAYAMA Rika (JPN) with a string of convincing attacks. UMEKI sealed her second Grand Prix title by countering an o-goshi attempt by breaking the balance of TAKAYAMA who went over for ippon. 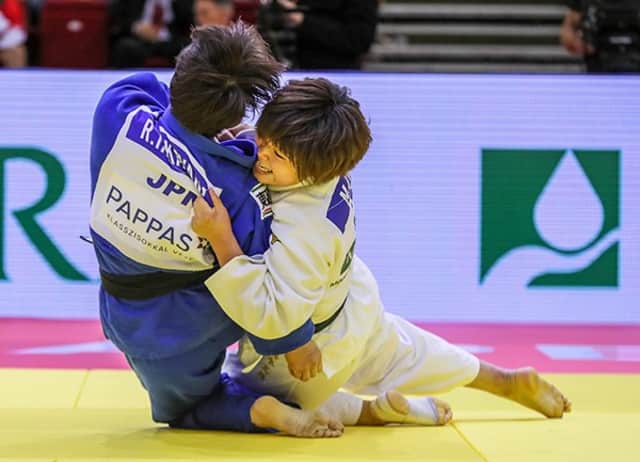 In the first semi-final UMEKI threw world number two Natalie POWELL (GBR) for ippon to extend her one-sided 100% record against the Welsh judoka to 8-0. In the second semi-final Paris Grand Slam silver medallist Guusje STEENHUIS (NED) was thrown by TAKAYAMA with an osoto-gari for a waza-ari score in golden score.

The first bronze medal contest was won by STEENHUIS who rushed past world bronze medallist Kaliema ANTOMARCHI (CUB) after 22 seconds as the Cuban had to submit to the shime-waza.

The second bronze medal was won by POWELL who showed her class to defeat younger teammate and Rome European Open winner Katie-Jemima YEATS-BROWN (GBR).  POWELL captured her 17th Grand Prix medal by scoring twice against YEATS-BROWN who only moved up to -78kg in July. 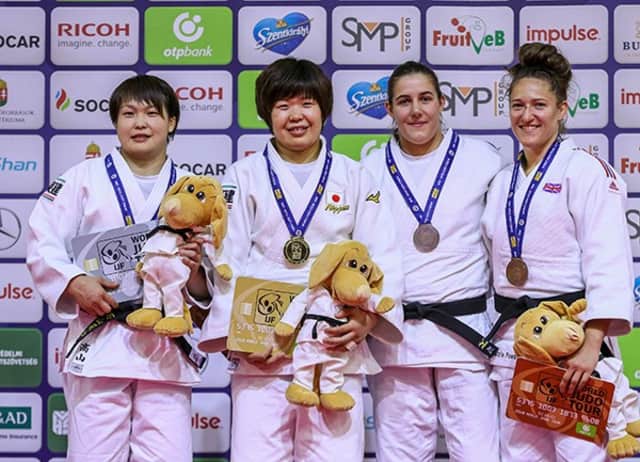 Cuban all-time great Idalys ORTIZ (CUB) remained undefeated in 2018 with a vintage display as the three-time Olympic medallist showed that she is on track for Baku 2018. ORTIZ, who won the Pan American Championships in April, is one of the most revered heavyweight judoka of all time having took bronze at Beijing 2008, gold at London 2012 and silver at Rio 2016 in addition to two world titles. The 28-year-old beat Tbilisi Grand Prix silver medallist Maryna SLUTSKAYA (BLR) in the +78kg final by a waza-ari in an exciting final. 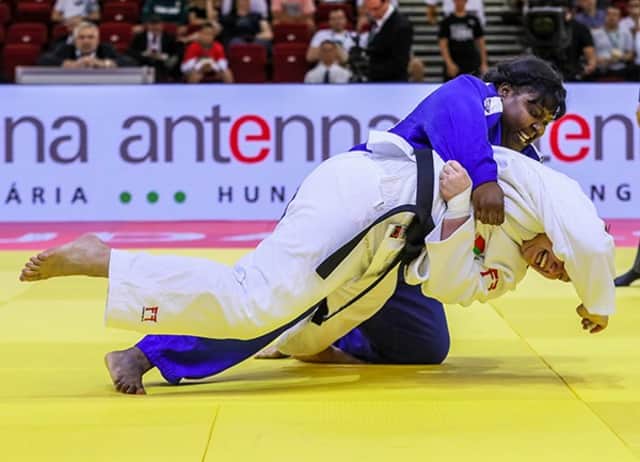 In the first semi-final SLUTSKAYA profited from an insipid display by world number 54 JIANG Yanan (CHN) who received three shido penalties and was disqualified. In the second semi-final ORTIZ defeated Openweight World Championships bronze medallist Nihel CHEIKH ROUHOU (TUN) who was given her marching orders after picking up not one or two but three shidos.

The first bronze medal was awarded to CHEIKH ROUHOU who threw Zagreb Grand Prix bronze medallist Yelyzaveta KALANINA (UKR) with a makikomi effort and pinned down the tall Ukranian for a second and match-winning waza-ari score.

The second bronze medal was won by JIANG who powered past Ekaterinburg Grand Slam bronze medallist Carolin WEISS (GER) with one of the best ippons of the competition. China’s number four at +78kg launched her German opponent with a huge o-guruma for the maximum score and her first medal on the IJF World Judo Tour. 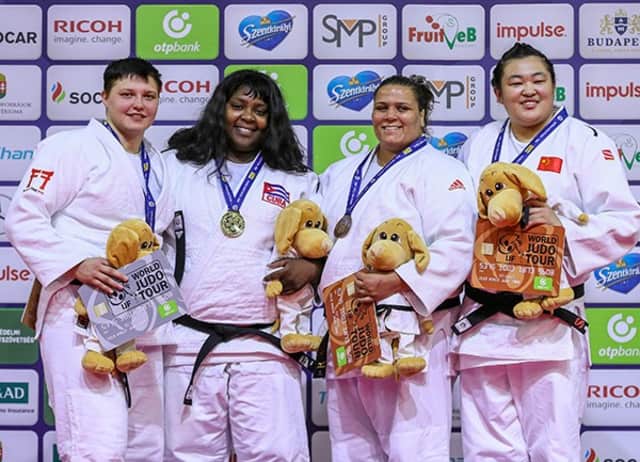 Former world silver medallist TOTH Krisztian (HUN) chalked up a fifth Grand Prix win and his second in his homeland with a battling display in the -90kg category. TOTH faced world bronze medallist Ushangi MARGIANI (GEO) in the gold medal contest and matched his 2017 win over the Georgian to send the home faithful into raptures. The Hungarian ace joined teammate UNGVARI Miklos as a home winner at Budapest 2018 and both men will be leading hopes for their country in Baku. TOTH clinched gold by a waza-ari score from a seoi-nage and after being awarded the final, he posed with his adoring supporters for pictures and had his hand raised by the mascot Judoggy who craved the spotlight alongside Hungary’s player of the day. 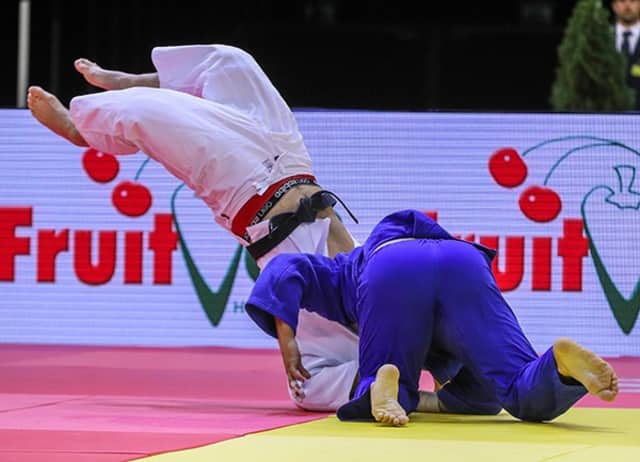 In the first semi-final MARGIANI bested Ekaterinburg Grand Slam winner Aleksandar KUKOLJ (SRB) by ippon. In the second semi-final European Championships bronze medallist Nikoloz SHERAZADISHVILI (ESP) finished second best against TOTH who scored a waza-ari with 14 seconds left which was the only score of the contest.

The first bronze medal was won by Pan American Championships winner Ivan Felipe SILVA MORALES (CUB) who squeezed past SHERAZADISHVILI by the slender margin of a single waza-ari from a uchi-mata.

The second bronze medal went to world number one KUKOLJ who beat Tunis Grand Prix bronze medallist David KLAMMERT (CZE) by a score of two waza-ari to one. With 30 seconds to go the scoreboard had a waza-ari apiece until the Serbian loaded his Czech rival onto his hip and over for a medal-winning score. 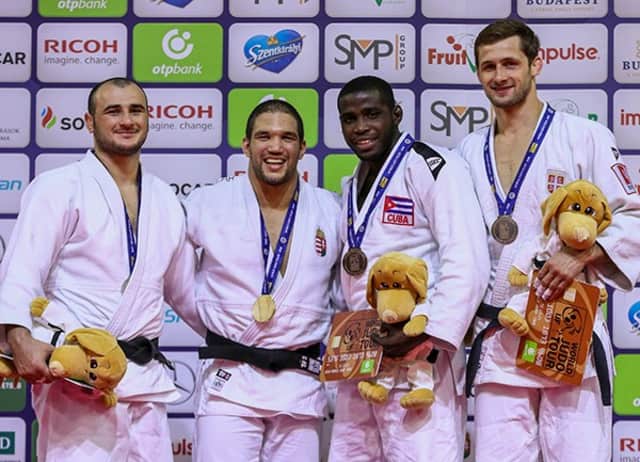 World champion WOLF Aaron (JPN) showed no signs of being off the circuit for 12 months as he won gold in Budapest as he did one year ago at his first World Championships. Tokai University judoka WOLF, who was wearing his red backpatch for the first time, in his comeback event, looked sharp and was ruthless with his ashi-waza which he used to setup the majority of his scores. WOLF went to a four-minute stalemate with Agadir Grand Prix bronze medallist Karl-Richard FREY (GER) as a period of golden score was summoned. After 13 additional seconds WOLF showed lightning quick footwork to deftly counter his German adversary for ippon and a scintillating return to competition. WOLF will be in Baku to defend his title and FREY will be one of a lhost of contenders with a focus on the returning champion at -100kg. 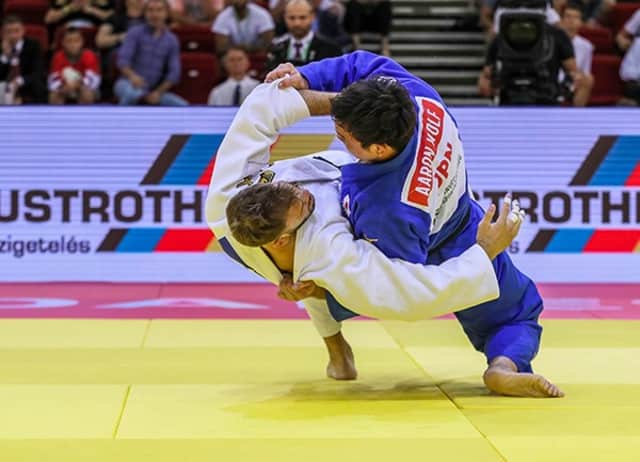 In the first semi-final FREY defeated four-time Grand Slam medallist Jevgenijs BORODAVKO (LAT) by ippon with a ko-soto-gake having put himself under pressure by accumulating two penalties. In the second semi-final world champion WOLF held down former Tbiisi Grand Prix silver medallist Martin PACEK (SWE) with a yoko-shiho-gatame for ippon. 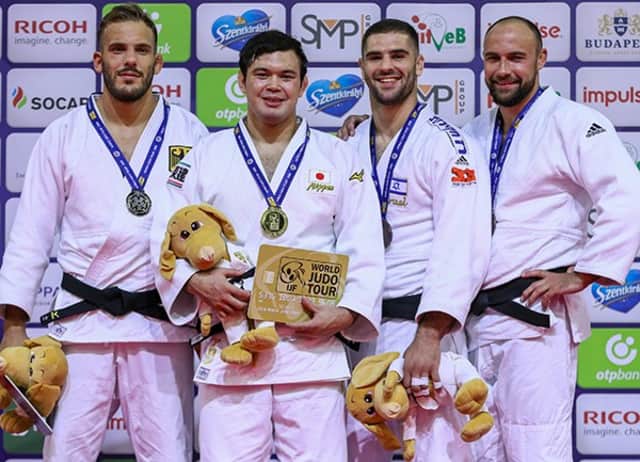 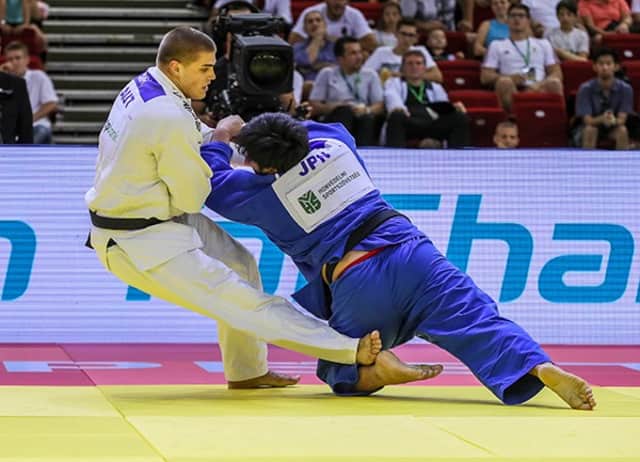 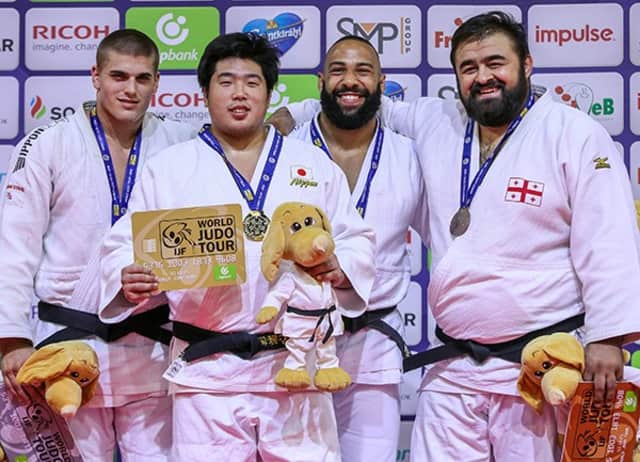