World number two Christa DEGUCHI (CAN) starred in the -57kg category as the 2018 world bronze medallist won the world title from defending champion YOSHIDA Tsukasa (JPN) to make history for Canada. Montreal Grand Prix winner DEGUCHI, 23, was a teammate of YOSHIDA, also 23, until she switched from representing her homeland of Japan to Canada, the nationality of her father who was matside all day long as a photographer. 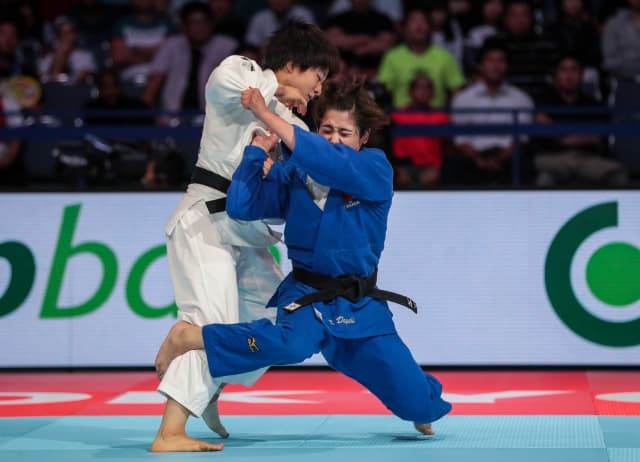 The rivals went 1-1 on the IJF tour last year and, as expected, were well-matched until DEGUCHI caught the Komatsu company judoka YOSHIDA with a ura-nage for a waza-ari and her first world title. The red backpatch will remain in Japan as DEGUCHI still lives here and is now installed as the favourite for Olympic gold next year. 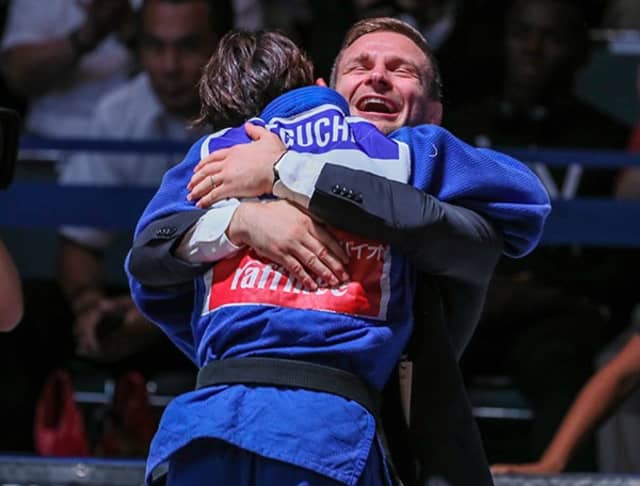 In the first semi-final DEGUCHI downed surprise package Ivelina ILIEVA (BUL) by pinning down the underdog for 20 seconds and ippon. The Canadian had a smooth outing for a place in the final and could sit back and watch the second semi-final to study both judoka with one of them poised to stand between her and world gold.

In the second semi-final YOSHIDA defeated Olympic champion Rafaela SILVA (BRA) after three minutes of golden score. The Japanese judoka was the aggressor while SILVA was battling to contain and counter her opponent as both judoka failed to trouble the scoreboard in regulation time. SILVA fiercely defended a hold down attempt from YOSHIDA and breathed a sigh of relief when the referee called the ‘matte’ only for the home judoka to launch with a ippon-seoi-nage for the maximum score and a place in the final.

In the first bronze medal contest Montreal Grand Prix bronze medallist Julia KOWALCZYK (POL) threw ILIEVA with 25 seconds left with a reverse seoi-nage for ippon to the delight of a large group of Polish supporters.

In the second bronze medal contest SILVA outgunned Worlds newcomer Sarah Leonie CYSIQUE (FRA) with a tenacious display. The Brazilian stepped up her bid to defend her Olympic crown next year by scoring a waza-ari against the young French judoka with 90 seconds left and showed her experience by tactially winding down the clock. Both judoka fell down onto the mat in unison, and facing the same direction, and cried for different reasons before embracing in a truly heartfelt moment of respect and friendship. 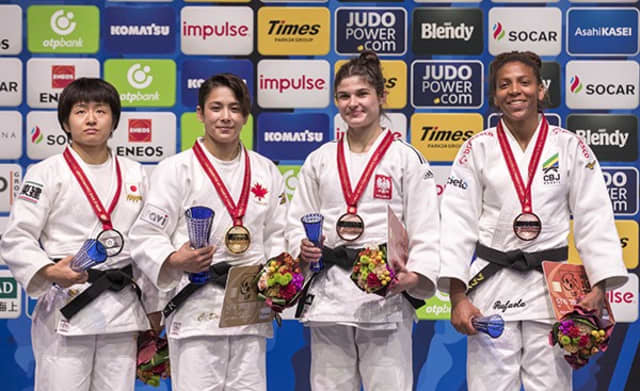 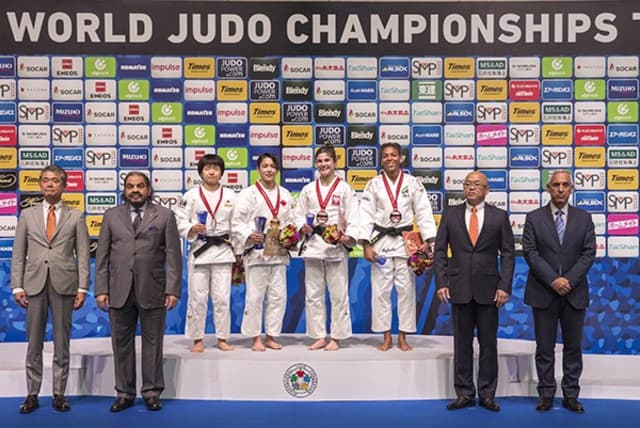 Olympic champion ONO Shohei (JPN) won a rematch of the Rio 2016 final as Olympic silver medallist Rustam ORUJOV (AZE) finished second best once again in a major final. ONO captured his third world title as he added to his 2013 and 2015 titles in his first appearance at the Worlds in four years. The 27-year-old is truly in a class of his own and extended his winning run to 28 consecutive contests on the international stage. The owner of the gold backpatch claimed also red backpatch by ippon with his devastating uchi-mata to a thunderous ovation and showed no emotions at all in a throwback to his Rio 2016 victory. ONO made everything look simple and showed the world why he’s regarded as judo’s pound-for-pound king. 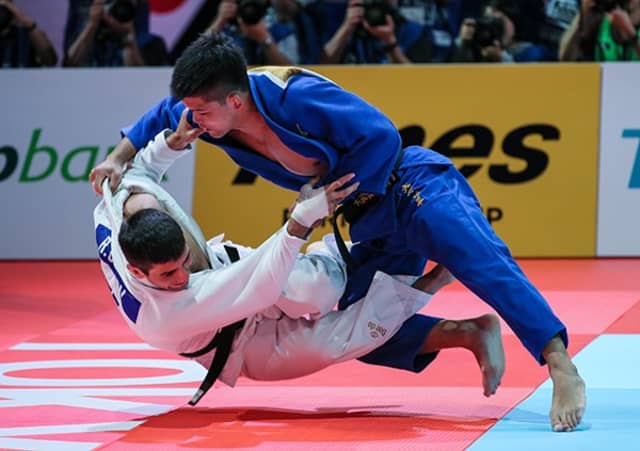 In the first semi-final ORUJOV narrowly defeated European Games bronze medallist Hidayat HEYDAROV (AZE) by a waza-ari score in the closing seconds to advance to his second World Championships final. 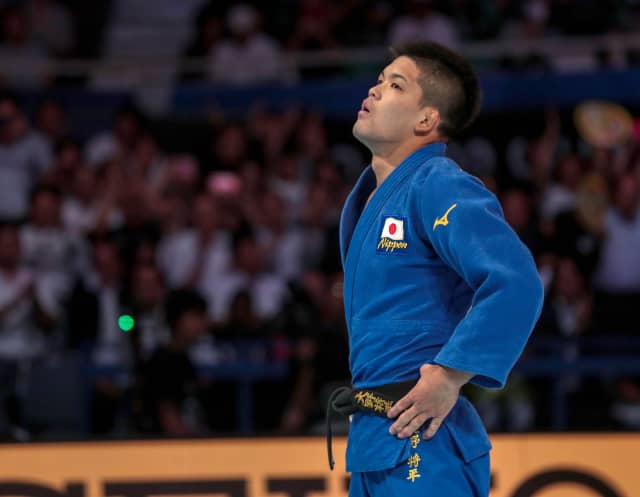 In the second semi-final ashi-waza ace Denis IARTCEV (RUS) felt the full force of ONO in what was a first-time meeting in individual competition with the pair having met once before in the 2014 World Team Championships final and the Russian had come out on top on that day. ONO scored a waza-ari from his favoured uchi-mata and held down the crafty Russian for 10 seconds to secure a place in the final.

In the first bronze medal contest IARTCEV floored Ekaterinburg Grand Slam bronze medallist and world number 29 Behruzi KHOJAZODA (TJK) for a waza-ari at the halfway point and the man with the educated feet held on to win his country’s second medal of the competition to ensure another late night for the sizable group of media from Russia.

In the second bronze medal contest HEYDAROV and former Junior World Championships bronze medallist Somon MAKHMADBEKOV (TJK) went to battle for over 11 minutes. The pair fought to a stalemate for the opening four minutes and needed an incredible seven minutes and 47 seconds of added time to produce a winner as the Azeri caught his opponent for a waza-ari to repeat his 2018 result. 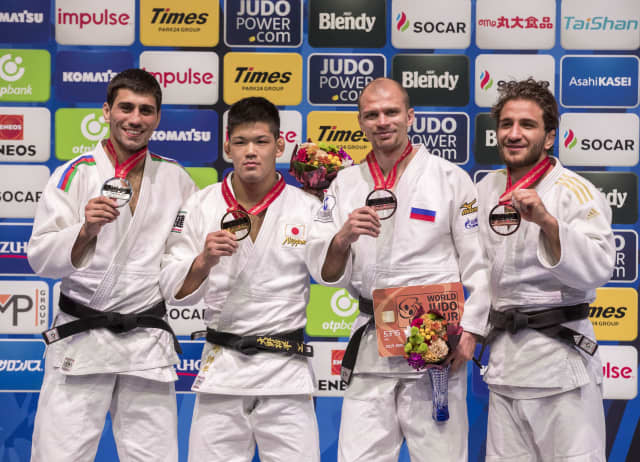 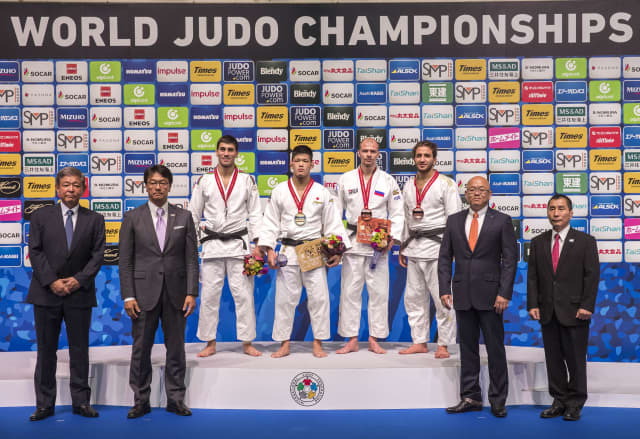 Watch day four of #JudoWorlds from 11am Japan time on Tuesday.