Written by Irina Florescu on 11. Jun 2021
Photographs by Nicolas Messner
Share
Big tournaments are always thought out to the last detail and are organised expertly, with each one of them having something special. The World Judo Championships Hungary 2021 also has its own unique feature: the skillfully made replica of the Széchenyi Chain Bridge, which is one of the most well known landmarks of Budapest. 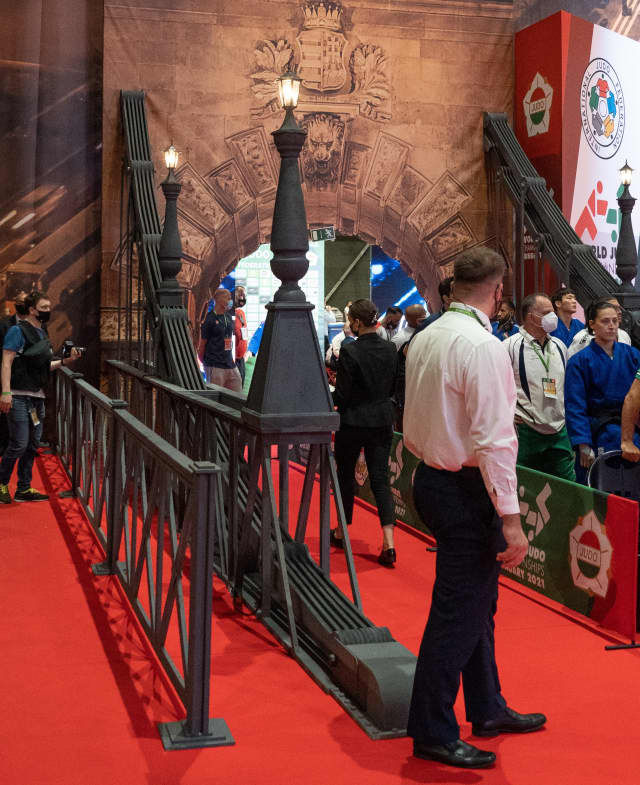 replica of the Széchenyi Chain Bridge

Through one part of the bridge, judoka enter the field of play and through the other they exit. Just like the bridge connects two historical parts of Hungary’s capital, Buda and Pest, our bridge ties every athlete’s past climbs and falls, with their future, decorated with world medals.

#JudoWorlds Technical Director Tibor Janity said, “The wall has been covered with a huge Budapest panel, but something was missing. The Chain Bridge is illustrated on it and we thought that we could revive the picture. Now everyone pays attention to the bridge first and then they can delight in the beauty of Budapest at night.”

The IJF Marketing Manager Tamas Zahonyi mentioned, “We have a tradition in Hungary. Here, at every championship, the entrances for judoka are decorated to look like bridges. Last year in the final block of Gram Slam Hungary, old bridges were renovated by a company which creates all the scenery for us. It’s dramatic to watch how the white and blue sides come from the different entrances, from opposite sides of the arena.”

The production of the bridge took more than two months, but now it can be set up in only two hours. The ‘chain’ parts are painted in the same color as the real ones and the lanterns are also copied from the original. The lighting system is very simple, but it gives the impression that you are standing right in front of the real Széchenyi Chain Bridge.

“Our bridge looks massive, but actually, it’s a very light structure, made from special plastic and wood. Even a child could pick it up with ease,” noted Tibor Janity.

Throwback in the time 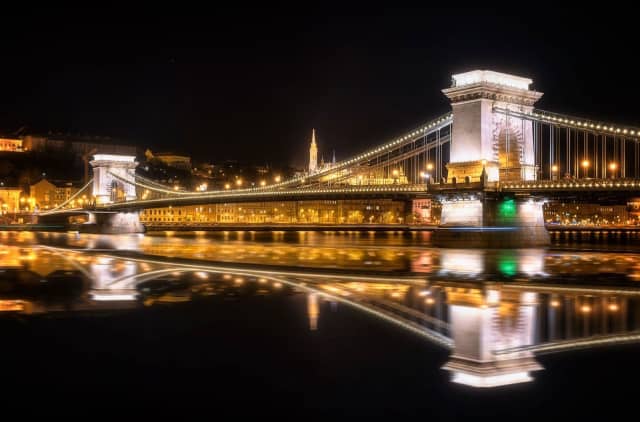 The Széchenyi Chain Bridge has a captivating history. It was opened in 1849 and was considered one of the modern world's engineering wonders. For its construction 6.2 million Hungarian Forint was spent; a colossal amount for that time. This was more than half the yearly budget of Hungary! For comparison, the construction of the National Museum in Budapest, which was completed out in the same period, cost 13 times less.

In World War II, the bridge was blown up by the retreating German troops, during the Siege of Budapest, with only the towers remaining. It was rebuilt and reopened in 1949. Its total length is 375m, with a width 14.8m. The bridge is a symbol of progress, national awakening and the link between the east and west.

The IJF always organises its championships with the highest level of presentation, never forgetting the small details. This bridge isn’t just a piece of furniture, it is a historical element which reminds us where we are and unites us with the cultural life of Hungary.