Four by Four in Marrakech

By Nicolas Messner, Gabriela Sabau, Emanuele Di Feliciantonio on 16. Oct 2019
Share
The first day of the Junior World Championships ended with a remarkable quartet of winning countries, with Japan, Brazil, Mongolia and Russia each winning gold in one of the categories at stake. 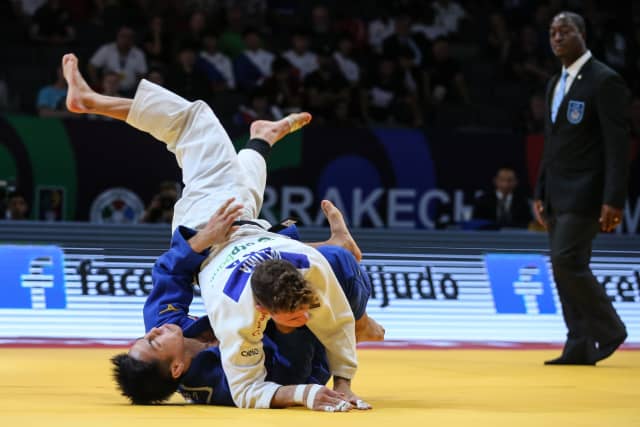 If Japan temporarily takes the lead of the nations standings, it owes it only to a small extra silver medal, in front of Brazil that performed a remarkable entry in this championship. After this first day, and the women -48kg and -52kg and men -60kg and -66kg categories, 10 countries climbed on the podium.

There is no doubt that the number of nations with medals will significantly increase during the three days of individual competition to come, while many strong nations are currently at the bottom of the podium.

A fresh wind prevailed during this first day of competition. It is obvious that many athletes are still in training and development phase before they will enter the senior age category. This is also what makes the interest of such an event. Note however, as it was the case with the Brazilian -66kg winner, that many juniors are already present on the World Judo Tour and as such, they already have some experience of the highest level. 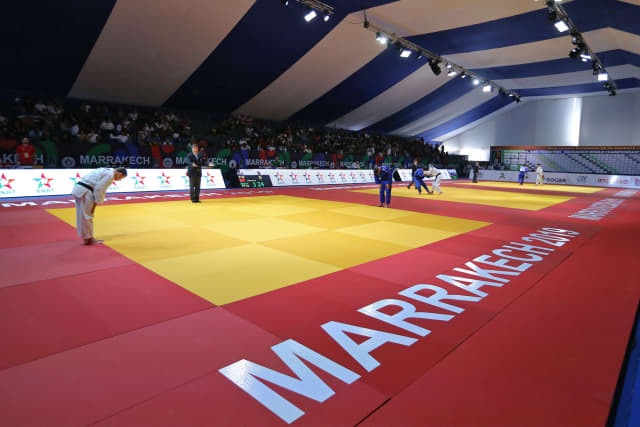 The first representative of the Japanese team to enter the tatami in a final at the junior world championships 2019 in Marrakech, was not a total unknown on the World Judo Tour, since KOGA Wakana won the Montreal Grand Prix at the beginning of July, at only 18 years old. In the final, she met French Shirine BOUKLI, silver medalist at the last European Junior Championships. 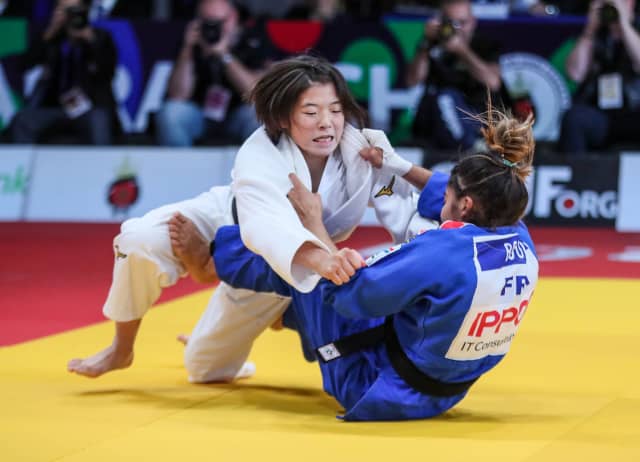 The Frenchwoman was quickly seeking physical contact by coming to seize far in the back of her opponent. But, although dangerous, she was penalized with a first shido for gripping the belt, before being nailed twice on the ground, once on ko-uchi-gari and once on o-uchi-gari, for two waza-ari. KOGA Wakana harvested the first gold medal of the week for Japan. 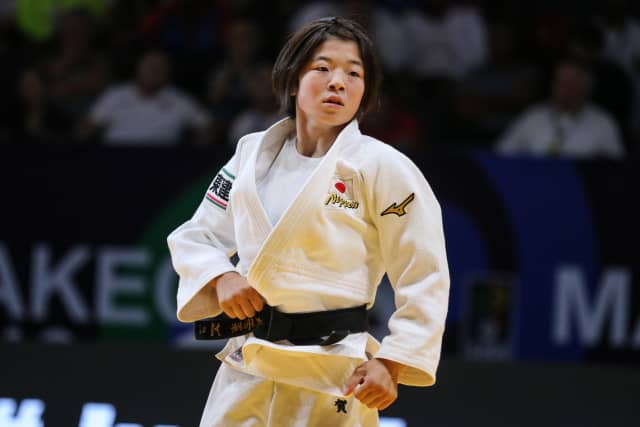 The first bronze medal of this first day of competition was between JON Su Song (PRK) and the bronze medalist of the 2015 World Cadet Championships, Turkish Tugce BEDER. After having received three penalties, BEDER was disqualified offering the first medal of the competition to JON Su Song.

In the second bronze medal contest, the second Japanese athlete of the category WATANABE Aiko (JPN) faced the already bronze medallist of last year's edition of the event, Andrea STOJADINOV (SRB). The opposition of style was quickly visible in a match between the left-handed WATANABE, a tai-otoshi specialist and the Serb, right-handed and ready to counter at any time. That is exactly what happened when STOJADINOV overpassed one of WATANABE's attacks to score a superb yoko-guruma for Ippon and the bronze medal. 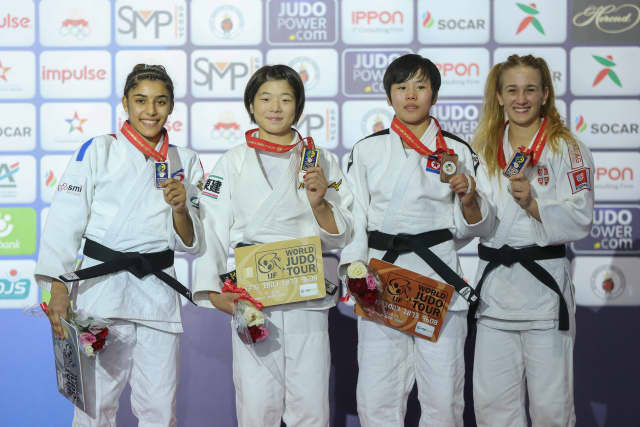 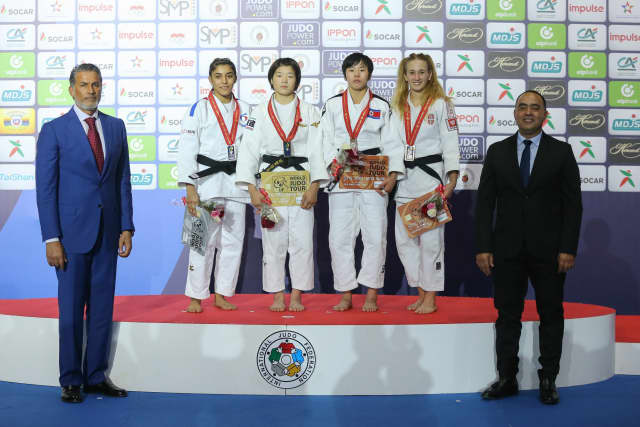 It has been years since Chinese Taipei has shown its capacity to regularly reach the top level at major international competitions. This is not about to stop with athletes such as HSU Lin Hsuan, who entered the final of the -52kg weight division with style. For the gold medal she was opposed to the Mongol LKHAGVASUREN Sosorbaram, who also confirms that Mongolia is a country of judo that also focuses on youth. 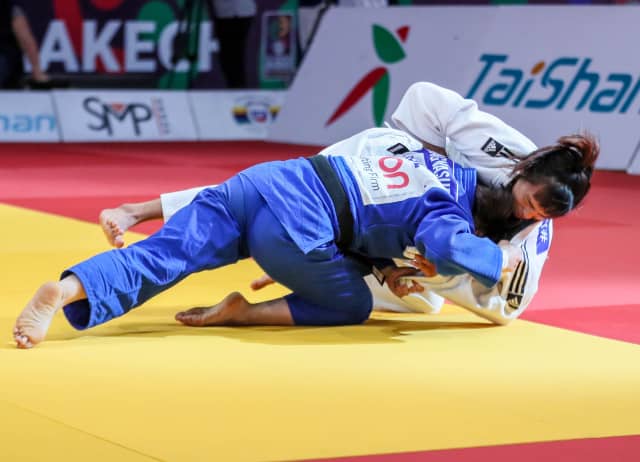 The silver medalist of the last Youth Olympic Games, LKHAGVASUREN was the fastest in action, as she scored a first waza-ari, on an opportunistic Kata-guruma, while a few seconds before the two competitors had been penalized for passivity. When the last minute started, LKHAGVASUREN, who had only to control, launched a reverse seoi-nage to score her second waza-ari and win the world gold medal. 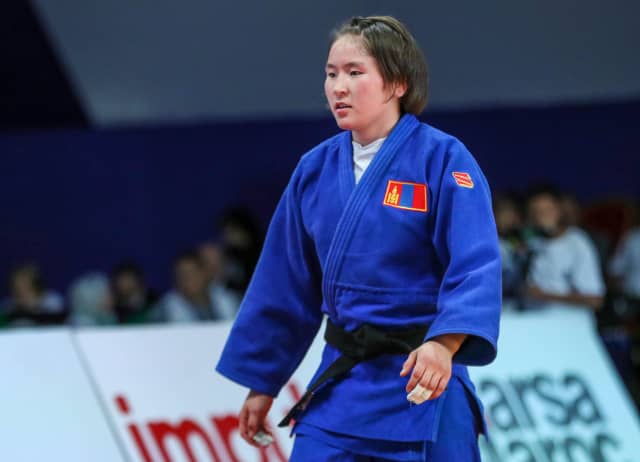 Brasil secured at least a first medal in Marracked as both athletes, Maria TABA (BRA) and Larissa PIMENTA (BRA), qualified for the bronze medal contest. It is always difficult to be opposed to someone with who you regularly rub shoulders at training. The slightest gesture is known, the strengths and weaknesses of the other as well. This become even more important, when it comes to winning a medal, it is more difficult, because the slightest mistake can lead you to the bottom of the podium.

During the first four minutes, neither TABA nor PIMENTA could take the lead, and just one penalty for each for passivity was given. It took three minutes and seventeen seconds of golden score for PIMENTA to finally win the medal while her opponent was penalized twice more. 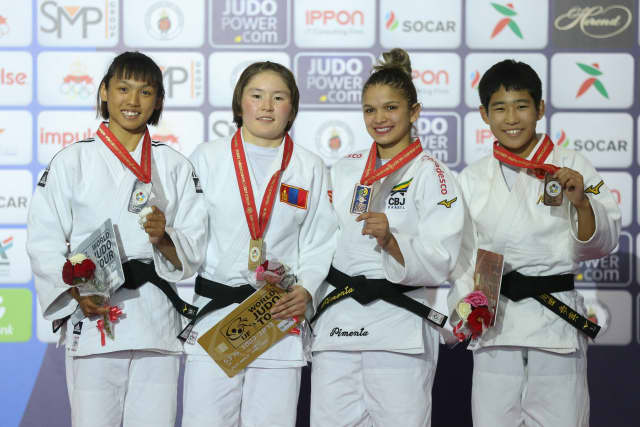 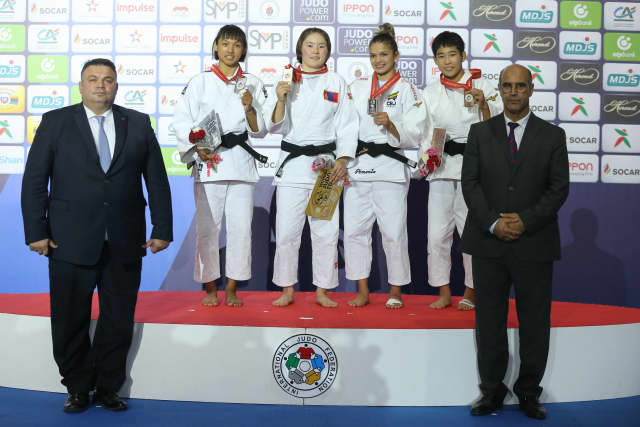 -60kg: SIMEONIDIS propels Russia on Top of the Podium 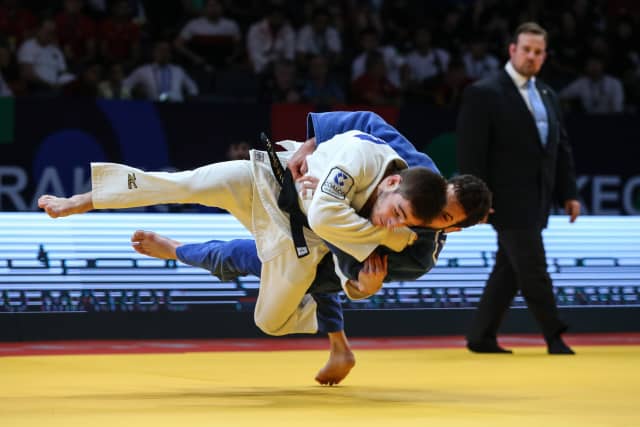 It quickly made no doubt that the two athletes, despite their young age, already knew each other perfectly and had studied one another's judo carefully. The seoi of one were followed by low kata-guruma of the other. While they were entering the last minute, there was only one shido each awarded. 60 seconds later the Golden score started, without anyone being capable of saying what would be the outcome of the match. 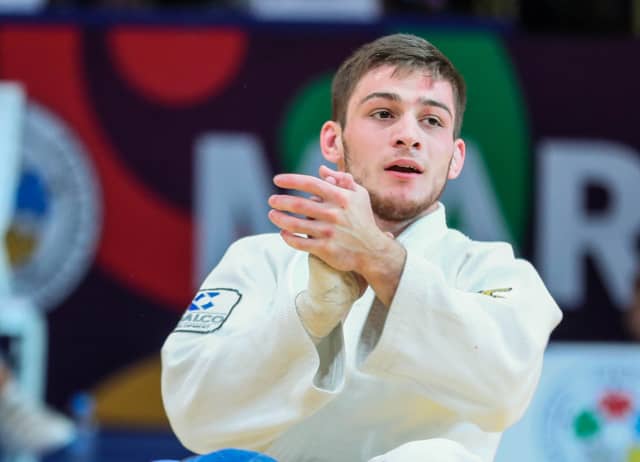 After 32 seconds of additional time, SIMEONIDIS launched an attack with standing shoulder movement, which he combined with an o-soto-gari after a timely change of direction. This liberating waza-ari offered the first gold medal for Russia.

In the first bronze medal contest of the category, SUEMATSU Ken (JPN) for his first appearance on the international circuit was opposed to Kubanychbek AIBEK UULU (KGZ), who finished at an honorable 7th place at the Senior Tokyo World Championships on August 25 this year. After having been penalized twice, AIBEK UULU had to take risks if he wanted to win the medal. But SUEMATSU didn't let him take the lead and scored a beautiful waza-ari with a reversed seoi-nage, and then controlled the rest of the contest until the final gong.

Turkey has proved to be on top of the young age categories with several impressive results during the last Cadet World Championships in Almaty. Once again, the Turkish delegation was present with skillful athletes in Marrakech, as Salih YILDIZ (TUR) was opposed to Hakberdi JUMAYEV (TKM) for the second bronze medal contest. The least we can say is that the contest started at a high pace, both athletes trying to impose their speed and their techniques, obviously not tired after a long day of competition. But it's finally, YILDIZ who took the bronze medal by performing an unstoppable kata-guruma for ippon. 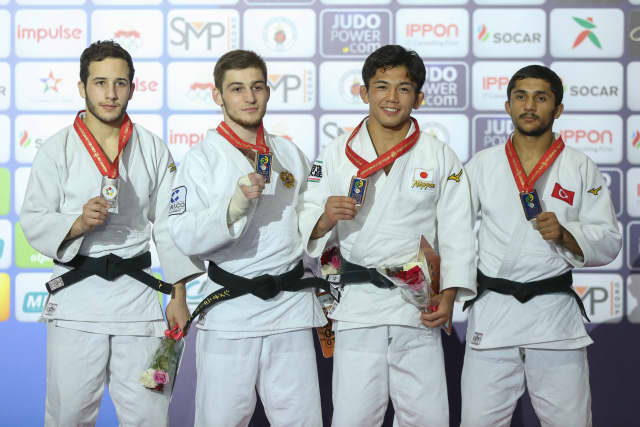 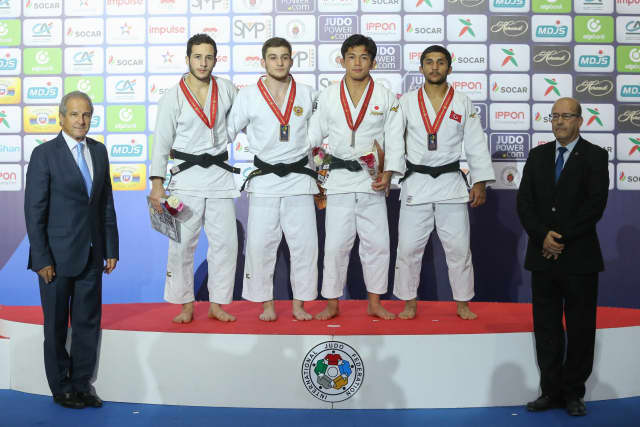 For the last final of the day, the bronze medallist of the Brasilia Grand Slam, a couple of weeks ago, William LIMA (BRA) was opposed to the 20 year old Japanese TAKEOKA Takeshi. 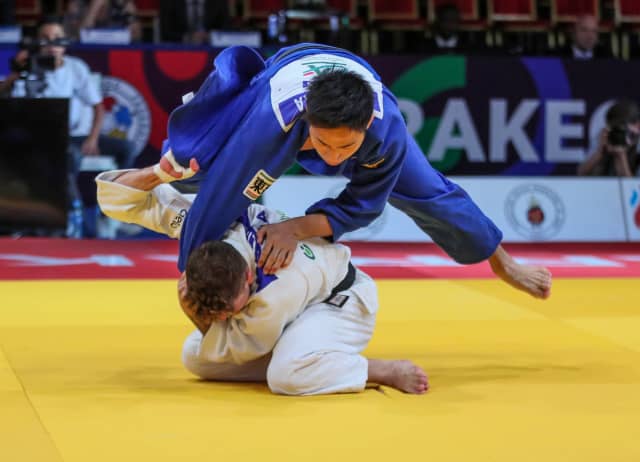 In less than thirty seconds, TAKEOKA already showed the full extent of his young tallent, imbalancing twice his opponent who caught up miraculously. But to everyone's surprise, it was LIMA who scored first on a lightning shoulder movement that sent TAKEOKA to the mat. The Japanese could only put strong pressure during the last seconds, but nothing helped and William LIMA wone the first gold medal for Brazil. 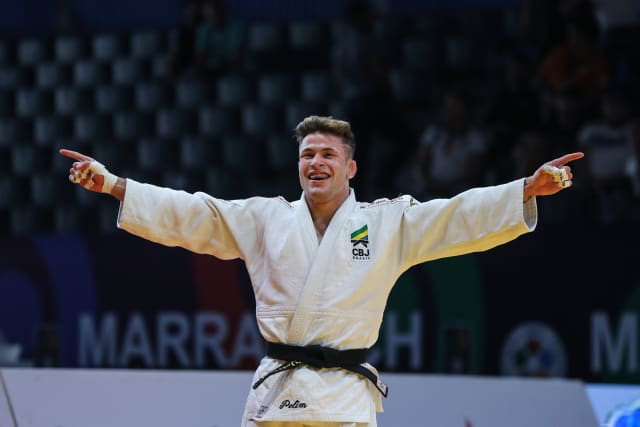 In the first bronze medal contest, the bronze medallist of the last Junior European Championships, Ibrahim ALIYEV (AZE) was opposed to Lucian BORS DUMITRESCU of Romania. If the first four minutes were rather to the advantage of ALIYEV, more offensive, he failed to score and it was not until the golden score that the winner could finally be awarded. Thus it was after a little more than two minutes of extra time that ALIYEV could celebrate while his opponent was penalized a third time after having stepped out of the tatami.

In the second bronze medal contest, Dilahodbek YULDOSHEV (UZB) faced Michael MARCELINO (BRA). In just over a minute, under the pressure of his opponent, the Uzbek had already been penalized twice. The Brazilian was not long before scoring a first waza-ari on a let-handed uchi-mata, on the edge of the competition area. Then MARCELINO had only to control until the final gong to win one more medal for the Brazilian delegation. 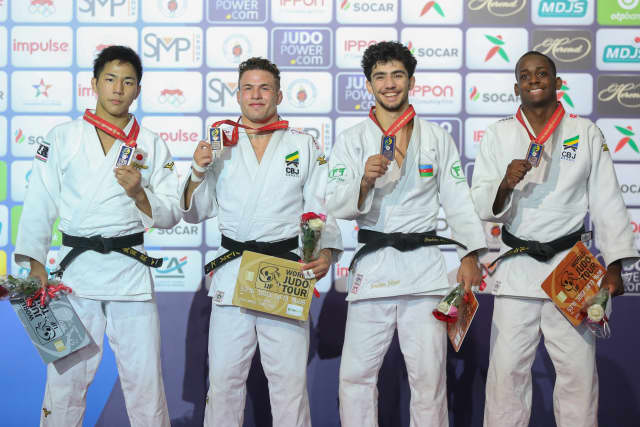 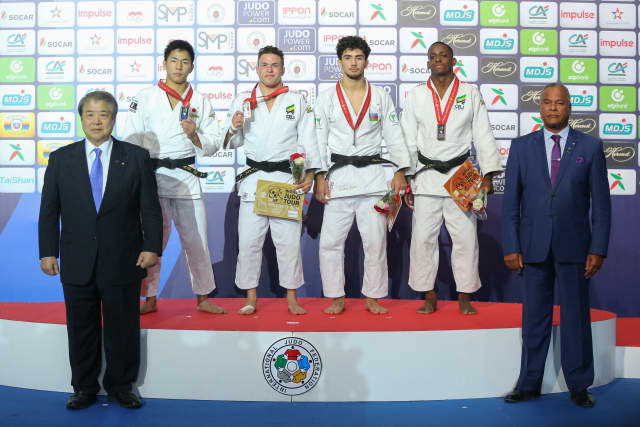 Interview
In choosing Morocco, all of Africa smiles